While prescription drug pricing was an issue at state and federal levels even prior to the COVID-19 pandemic, there may be increased attention to Medicaid prescription drug policies as states face fiscal pressures from the economic effects of the pandemic and as the federal government may seek spending offsets to upcoming legislation aimed to expand coverage.  Medicaid provides health coverage for millions of Americans, including many with substantial health needs who rely on Medicaid drug coverage both for acute problems and for managing ongoing chronic or disabling conditions. Though the pharmacy benefit is a state option, all states provide pharmacy benefit coverage. Due to federally required rebates (under the Medicaid Drug Rebate Program, or MDRP), Medicaid pays substantially lower net prices for drugs than Medicare or private insurers, but Medicaid must provide coverage for all approved drugs for manufacturers participating in the MDRP. Within federal guidelines, states have flexibility to administer the benefit with regard to pricing, utilization management and supplemental rebates.

Policies designed to generate federal or state savings are likely to have implications for and invoke behavioral responses from other entities including drug manufacturers, pharmacies, managed care organizations (MCOs) and pharmacy benefit managers (PBMs).  Because these policy changes do not affect federal rules limiting Medicaid cost-sharing to nominal amounts, we did not separately examine how each policy change would affect enrollee costs. This report examines how leading federal and state policy proposals that increase Medicaid drug rebates, increase price transparency, and target drug prices could affect these entities, which could influence debate over these proposals and what the effects would be (Figure 1). 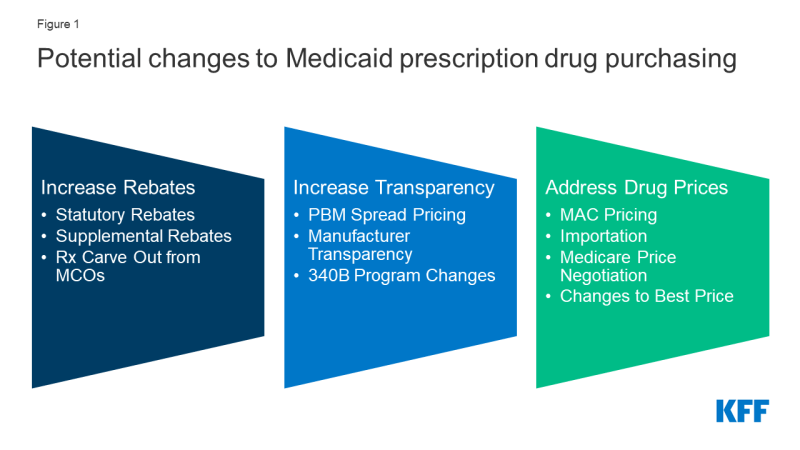 Policy proposals to increase rebates reduce federal and/or state spending through lower net reimbursement to manufacturers. While Medicaid rebates already provide a significant offset to the program’s drug spending, several policy proposals aim to further increase drug rebates in Medicaid.  Changes to the statutory rebate require changes in federal legislation; however, states have flexibility to use supplemental rebates and decide whether benefits are delivered through MCOs or are carved-out.  Increased rebates under MDRP would lead to direct federal savings, though the effect on state spending is dependent on how the policy is structured. States efforts to increase supplemental rebate agreements generally aim to increase purchasing power or other leverage in negotiation with manufacturers. States may be able to pool purchasing power across or within states, but ability to increase supplemental rebates in the future is uncertain. States may also seek to carve out prescription drugs from MCO contracts to capture all supplemental rebates and concentrate negotiating power.

Lack of transparency through the prescription drug pricing process, both in general and specifically within Medicaid, has led to several proposed federal and state policy proposals that aim to provide accurate and public information on drug pricing.  Drug list prices affect not only the reimbursement paid to the pharmacy but also the rebates the Medicaid program receives.  While list prices are public, manufacturers do not provide public information on how they set list prices and historically have not been required to explain changes in a product’s list price. Price transparency policies aim to make pricing information public to identify cost drivers, provide evidence for policy makers, or sometimes apply pressure to get payers to lower prices. Such policies include efforts to ban or limit spread pricing by pharmacy benefit managers (PBMs), policies to make information about list prices more accessible and efforts to limit or monitor 340B programs. The estimated savings to federal and state governments from efforts to increase PBM transparency is uncertain because estimates of spread pricing or the effect of bans on it vary widely, making the scale of the cost savings to Medicaid difficult to predict. It is also difficult to predict how other price transparency changes would affect state or federal Medicaid drug spending. Early efforts in these areas have not yet reported their impact on prices or costs.

Several other policies under consideration directly target Medicaid drug prices or prices paid by other payers, which would affect Medicaid prices as well. Generally, proposals that reduce underlying drug prices will reduce federal and state spending and decrease manufacturer reimbursement overall. For example, policies to expand the number of drugs affected by price ceilings (state Maximum Allowable Cost, or SMAC) could lead states to pay less in drug reimbursement.  Medicaid’s rebate formula ensures that the program receives “best price,” but the best price provision is often cited by manufacturers and other stakeholders as a barrier to discounts and value-based contracts for other payers. Proposals to eliminate best price would generally increase federal and state costs and increase reimbursement for manufacturers. Proposals to import drugs from foreign markets as a way to lower drug prices for consumers and state governments have gained attention in recent years but are unlikely to have a substantial effect on Medicaid drug spending. Proposals that would allow the federal government to negotiate the price of prescription drugs on behalf of people enrolled in Medicare Part D drug plans would, in general, increase state Medicaid drug costs due to lower rebate payments but would decrease federal spending overall.

Looking ahead, federal and state policymakers continue to show interest in proposals to lower prescription drug costs as the public remains concerned about high and rising drug prices. President Biden has voiced support for policy proposals related to Medicare drug price negotiation and drug inflation rebates, and Congress may look to enact drug pricing proposals that were voted on but not enacted into law in the previous session. In addition, drug pricing policies, including Medicaid proposals, that reduce federal spending may provide spending offsets for other legislative priorities. Assessment of the implications of these proposals for Medicaid, and the actors involved in state Medicaid drug policy, can help understand their potential direct and indirect effects.