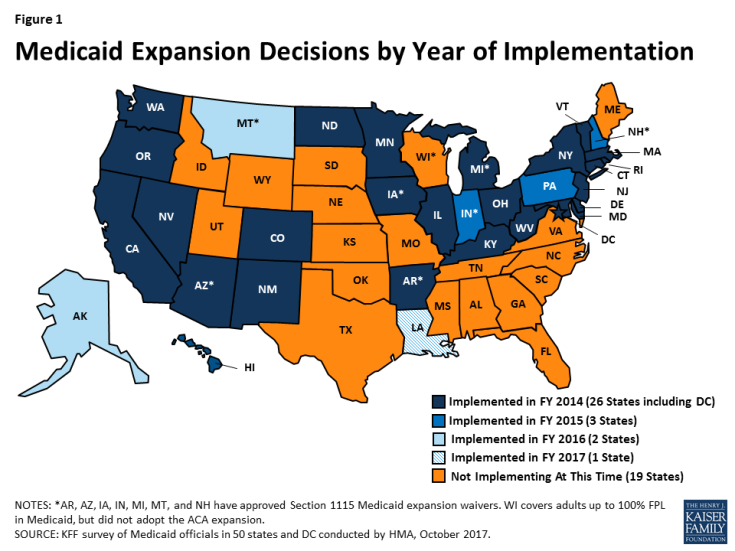 Several non-expansion states (Idaho, Tennessee, Virginia, and Wyoming) reported that consideration of the Medicaid expansion was on hold due to uncertainty about the future of the Medicaid expansion option. North Carolina’s governor announced plans to adopt the expansion shortly after taking office in January 2017. These plans have been delayed, however, by a lawsuit brought by a group of legislators challenging the governor’s authority to expand without legislative approval.2 In Maine, voters will decide whether the state will adopt the ACA Medicaid expansion in a referendum this November.3

Beyond the ACA Medicaid expansion, states have made very few changes to expand Medicaid eligibility since 2014, and states reported only a few narrow expansions targeting a limited number of beneficiaries implemented in FY 2017 or planned for FY 2018 (Tables 1 and 2).

In addition to the ACA Medicaid expansion in Louisiana, a total of six other states made changes that expanded Medicaid eligibility in FY 2017. For FY 2018, seven states plan to implement eligibility expansions. Notable expansions reported include the following:

Eight states reported eligibility restrictions for FY 2018 (six states through Section 1115 waivers and two states through state plan authority), some in response to a March 2017 Trump administration letter to state governors6 that signaled an openness to approve Section 1115 waivers that include work requirements and more expansive use of premiums and cost sharing. This year’s survey captured changes that states have implemented or plan to implement in FY 2018, even if these changes are included in Section 1115 Waiver proposals that are pending approval 7 at CMS. Waiver provisions (in approved or pending waivers) that states plan to implement in FY 2019 or after are described later in the “Challenges and Priorities” section of this report.8 A description of key eligibility restrictions included in pending Section 1115 waivers planned for FY 2018 implementation follows.

The Medicaid statute generally does not allow states to charge premiums to Medicaid beneficiaries. Only two states reported activity related to Medicaid premiums in either FY 2017 or FY 2018.19 In FY 2017, Arkansas replaced the requirement that expansion enrollees make contributions to “Health Independence Accounts” with a new 2 percent of income premium requirement (up to $13/month) for expansion enrollees above 100 percent FPL. Indiana’s pending waiver includes requests to: (1) add a 1 percent premium surcharge for tobacco users beginning in the second year of enrollment, (2) require Transitional Medical Assistance parents with income up to 138 percent FPL to pay premiums like expansion adults, and (3) change to a tiered premium structure instead of a flat charge of 2 percent of income (this change is planned for FY 2018 and expected to have a neutral effect on beneficiaries) (Table 2).

In recent years, many states have implemented new policies to connect individuals involved with the criminal justice system to Medicaid given that the Medicaid expansion made many of these individuals newly eligible for coverage (including childless adults who were not previously eligible in most states). Connecting these individuals to health coverage20 can facilitate their integration back into the community. Individuals may be enrolled in Medicaid while they are incarcerated, but Medicaid cannot cover the cost of their care during their period of incarceration, except for inpatient services. Nearly all states have policies in place to cover inpatient care for individuals who are incarcerated under Medicaid. Most states are also working with corrections agencies and with local jails to facilitate enrolling individuals in Medicaid before they are released. In addition, half of the states (25) have enrollment initiatives to facilitate Medicaid enrollment for parolees. Some states train criminal justice employees to assist with Medicaid applications and other states have dedicated Medicaid staff to work with the corrections agencies to facilitate enrollment for inmates or payment for inpatient care of inmates. Finally, the majority of states suspend rather than terminate Medicaid coverage for enrollees who become incarcerated. When coverage is suspended, it can be reinstated more easily and quickly upon release from incarceration or when an inpatient hospital stay occurs.21

Details on Medicaid coverage for individuals involved with the criminal justice system are included in Exhibit 1 and Table 3.