Medicaid is the nation’s primary payer for long-term services and supports (LTSS), covering a continuum of services ranging from home and community-based services (HCBS) that allow persons to live independently in their own homes or in other community settings to institutional care provided in nursing facilities (NFs) and intermediate care facilities for individuals with intellectual disabilities (ICF-IDs). In 2015, spending on HCBS increased 7 percent while institutional spending decreased slightly, by 0.1 percent. HCBS represented 55 percent of total Medicaid expenditures on LTSS, and institutional LTSS represented 45 percent,2 a dramatic shift from 1995, when institutional settings accounted for 82 percent of national Medicaid LTSS expenditures.3

This year’s survey shows the vast majority of states in FY 2017 (47) and all states in FY 2018 (51) employing one or more strategies to expand the number of people served in home and community-based settings (Figure 6 and Table 10). 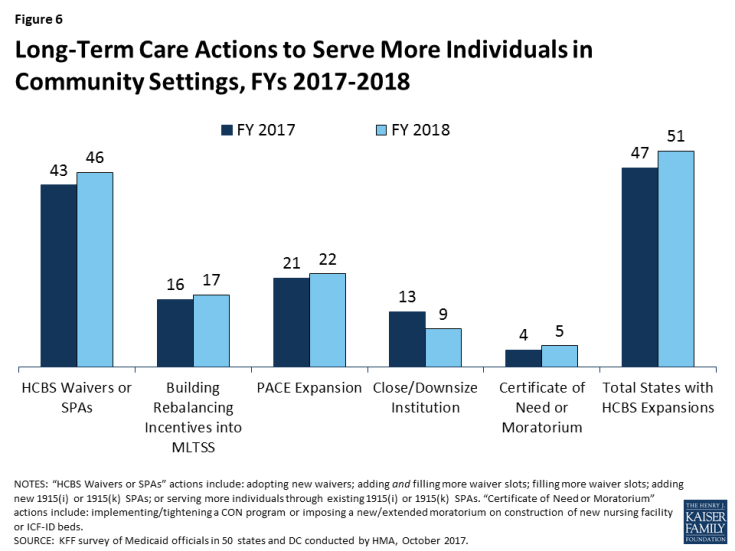 States were also asked whether they have adopted or plan to adopt new restrictions on the number of people served in the community. In FY 2018, Missouri noted they are reducing enrollees’ state plan consumer directed services budgets to equal 60 percent of the cost of nursing home care. In addition, Texas noted that, while the state budget included increased funding to support additional slots in Section 1915(c) waivers, the state has slowed down the rollout of new slots because of unanticipated increases in Community First Choice expenditures.

In June 2015, CMS issued an Informational Bulletin to clarify when and how Medicaid reimburses for certain housing-related activities, including individual housing transition services, individual housing and tenancy sustaining services, and state-level housing related collaborative activities.8 CMS’s intent was to assist states in designing benefits that support community integration for seniors, individuals with disabilities, and individuals experiencing chronic homelessness. Over half of states (27 states) reported that they implemented or expanded a housing-related strategy outlined in the CMS bulletin in FY 2017 and/or FY 2018 (Exhibit 7).

Many of the services outlined in CMS’s Informational Bulletin were developed under the auspices of federal grant programs, including the Money Follows the Person (MFP) rebalancing demonstration. MFP is a federal grant program, enacted under the Deficit Reduction Act of 2005 and extended through September 2016 by the Affordable Care Act, which operated in 44 states.9,10 Enhanced federal funding under MFP has supported the transition of over 63,000 individuals from institutional to home and community-based long-term care settings as of December 2015.11 Under MFP, states identified the lack of affordable and accessible housing as a major barrier to assisting individuals to leave institutional settings of care.12 With MFP resources, many states have offered new housing related services, incorporated housing expertise within the Medicaid program to increase the likelihood of successful community living for persons who need supports, and engaged in strategic activities to assist in identifying and securing housing resources for individuals who choose HCBS.13

After September 2016, with CMS approval, states can continue to transition eligible individuals through 2018 and expend remaining MFP funds through federal FY 2020.14 As of July 2017, 30 states report that they currently offer housing-related services under a state plan, Section 1915(c) waiver, or Section 1115 waiver that the state intends to continue after the expiration of the MFP. However, 21 states report some services will likely be discontinued when MFP funding runs out. Examples of MFP services and activities that states may discontinue include: home delivered meals, vehicle modifications, independent living skills training, housing transition services, peer mentorship, and caregiver education, among others.

Only one state, Oregon, reported eliminating an HCBS benefit, proposing to eliminate coverage for a live-in program in FY 2018.

As of July 1, 2017, almost half of states (23 states) covered LTSS through one or more of the following types of capitated managed care arrangements:

Of the 23 states that reported using one or more of these MLTSS models, nine states reported using two models, and one state (New York) reported using all three. Of the states with capitated MLTSS, 15 offered some form of MLTSS plan on a statewide basis for at least some LTSS populations as of July 1, 2017 (Table 11).

Other states not participating in a formal demonstration have taken action to encourage improved coordination and integration of services for the dually eligible population under MCO arrangements. Eight states23 require Medicaid-contracting MCOs to be Medicare Dual Eligible Special Needs Plans (D-SNP)24 or Fully Integrated Dual Eligible (FIDE) Special Needs Plans,25 creating an opportunity for improved coordination and integration for beneficiaries. Five states26 encourage MCOs to be a D-SNP or a FIDE-SNP.

For geographic areas where MLTSS operates, this year’s survey asked whether, as of July 1, 2017, certain populations were enrolled in MLTSS on a mandatory or voluntary basis or were always excluded. On the survey, states selected from “always mandatory,” “always voluntary,” “varies,” or “always excluded” for the following populations: seniors, persons with ID/DD, nonelderly adults with physical disabilities, and full benefit dual eligible individuals. As shown in Exhibit 10 below, seniors were most likely to be enrolled on a mandatory basis. Persons with ID/DD were excluded from enrollment in only three MLTSS states, though they were least likely to be enrolled on a mandatory basis. No state offering MLTSS always excludes full benefit dual eligible individuals from MLTSS enrollment.

Growth in the use of MLTSS has continued since the prior survey reporting year. South Carolina expanded MLTSS to new regions in FY 2017 while Pennsylvania will expand to new regions in FY 2018 (Exhibit 11). In FY 2018, Virginia will roll out a new MLTSS program. Wisconsin’s Family Care Program will be statewide by the end of FY 2018. Five states extended MLTSS to new populations in FY 2017 (Illinois, New York, South Carolina, Tennessee, and Texas). In FY 2018, two states (New York and Pennsylvania) will extend MLTSS to new populations. No states reported actions or plans to decrease the number of enrollees served in MLTSS in FY 2017 or FY 2018.

Almost every MLTSS state (21 out of 23 states) includes both institutional and HCBS in the same contractual arrangement, while two states (Michigan and Tennessee) report that this varies by MLTSS arrangement. Only one state reported a MLTSS benefit change in FY 2017 or FY 2018. Michigan added hospice benefits to its FAD in FY 2017.

TABLE 10: LONG-TERM CARE ACTIONS TO SERVE MORE INDIVIDUALS IN COMMUNITY SETTINGS IN ALL 50 STATES AND DC, FY 2017 AND FY 2018