Medicaid covers one in five Americans, accounts for one in six dollars spent on health care in the United States and more than half of all spending for long-term services and supports, and is a state budget driver as well as the largest source of federal revenues to states. Medicaid is constantly evolving as policymakers strive to improve program value and outcomes through delivery system reforms, respond to economic conditions or public health concerns (such as the opioid epidemic), or implement federal policy changes including those in the Affordable Care Act (ACA) or other regulatory changes (like the recent Medicaid managed care rule). As states began state fiscal year (FY) 2018, Congress was debating major ACA repeal and replace legislation generating great uncertainty for states around Medicaid including the future of the ACA and financing for the Medicaid expansion as well as overall financing for the Medicaid program.

This report provides an in-depth examination of the changes taking place in Medicaid programs across the country during this time of uncertainty. The findings are drawn from the 17th annual budget survey of Medicaid officials in all 50 states and the District of Columbia conducted by the Kaiser Family Foundation (KFF) and Health Management Associates (HMA), in collaboration with the National Association of Medicaid Directors (NAMD). This report highlights certain policies in place in state Medicaid programs in FY 2017 and policy changes implemented or planned for FY 2018. The District of Columbia is counted as a state for the purposes of this report. Given differences in the financing structure of their programs, the U.S. territories were not included in this analysis.

Key findings show that despite uncertainty about federal legislative changes, many states were continuing efforts to expand managed care, move ahead with payment and delivery system reforms, increase provider payment rates, and expand benefits as well as community-based long-term services and supports. Emerging trends include proposals to restrict eligibility (e.g., work requirements) and impose premiums through Section 1115 waivers, movement to include value-based purchasing requirements in MCO contracts, and efforts to combat the growing opioid epidemic. Key areas to watch include federal legislative efforts to restructure and limit federal Medicaid financing as well as Section 1115 waiver activity (state waiver proposals and CMS approvals). These issues will have implications for states, providers, and beneficiaries that could shape the future of the Medicaid program in FY 2018 and beyond (Figure ES – 1). 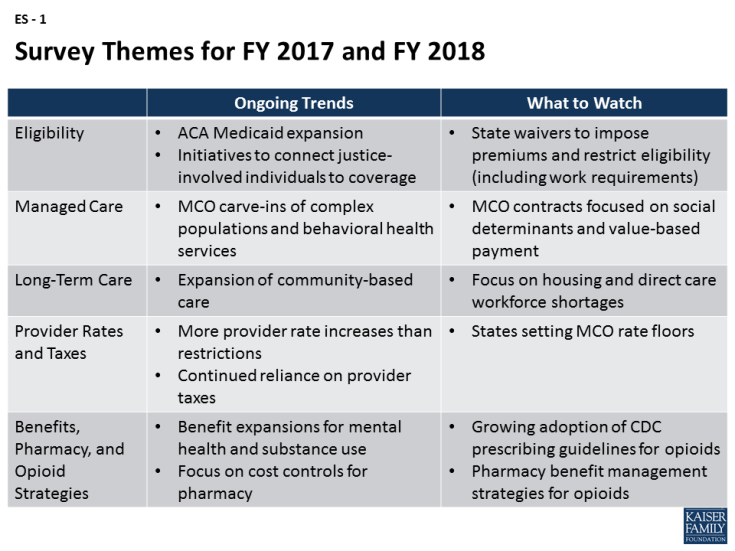 Since 2014, most major eligibility changes have been related to adoption of the ACA Medicaid expansion. To date, 32 states have implemented the expansion (Louisiana was the latest state to adopt the expansion in FY 2017). Largely because the Medicaid expansion made many individuals involved in the criminal justice system newly eligible for coverage (including childless adults who were not previously eligible in most states), many states have implemented policies to facilitate enrollment in Medicaid upon release and to suspend, rather than terminate, Medicaid eligibility for incarcerated individuals. The majority of states also have policies in place to provide Medicaid coverage of inpatient care for those incarcerated in prisons or jails.

What to watch: Several non-expansion states (Idaho, Tennessee, Virginia, and Wyoming) reported this year that consideration of the Medicaid expansion was on hold due to uncertainty about the future of the Medicaid expansion option. For FY 2018, several states are seeking Medicaid eligibility restrictions through Section 1115 waivers, including conditioning eligibility on meeting work requirements,1 elimination of retroactive eligibility, and elimination of Medicaid expansion coverage for those with incomes above 100 percent of the federal poverty level (FPL).2 Eligibility provisions in proposals in Arkansas and Indiana would apply to ACA Medicaid expansion populations and proposals in Iowa, Maine, and Utah would apply to non-expansion populations. Two states (Arkansas and Indiana) reported activity related to Medicaid premiums in FY 2017 or FY 2018, both through Section 1115 waivers.

Managed care is the predominant delivery system for Medicaid in most states. Among the 39 states with comprehensive risk-based managed care organizations (MCOs), 29 states reported that 75 percent or more of their Medicaid beneficiaries were enrolled in MCOs as of July 1, 2017. More states continue to carve complex populations as well as behavioral health services into MCO contracts. Twenty-six of the 39 MCO states reported that they plan to use authority to receive federal matching funds for adults receiving inpatient psychiatric or substance use disorder (SUD) treatment in an institution for mental disease (IMD) for no more than 15 days a month included in the 2016 managed care regulations. Close to half of MCO states reported that the day limit is insufficient to meet acute inpatient or residential treatment needs for those with serious mental illness (SMI) or SUD.3 Nearly all states have managed care quality initiatives in place such as pay for performance or capitation withholds. Working in conjunction with or outside of MCO contracts, the majority of states (40) had one or more delivery system or payment reform initiative in place in FY 2017 (e.g., patient-centered medical home, ACA Health Home, accountable care organization, episode of care payment, or delivery system reform incentive program (DSRIP)).

The vast majority of states in FY 2017 (47 states) and all states in FY 2018 are using a variety of tools and strategies to expand the number of people served in home and community-based settings. The most common strategies include using home and community-based services (HCBS) waivers or state plan options, serving more individuals through Programs of All-Inclusive Care for the Elderly (PACE), and building rebalancing incentives into managed long-term services and supports (MLTSS) contracts. Twenty-three states cover LTSS through one or more capitated managed care arrangements as of July 1, 2017.

What to watch: Housing supports are an increasingly important part of state LTSS benefits. Over half of states (27) reported that they implemented or expanded housing-related activities outlined in CMS’s June 2015 Informational Bulletin (e.g., housing transition services or housing and tenancy sustaining services) in FY 2017 or FY 2018 (up from 16 states reported last year). States are also focused on addressing LTSS direct care workforce shortages and turnover: 17 states reported efforts in FY 2017 or 2018 to increase wages for direct care workers and/or engage in targeted workforce development activities (recruiting, training, credentialing, etc.).

In FY 2017 and FY 2018, more states made or are planning provider rate increases compared to restrictions across all provider types, except for inpatient hospital rates (hospital rate restrictions are primarily rate freezes, which are counted as restrictions in this report). All states except Alaska rely on provider taxes and fees to provide a portion of the non-federal share of the costs of Medicaid. Three states indicated plans for new provider taxes in FY 2018 and 13 states plan provider tax increases.

A total of 26 states expanded or enhanced covered benefits in FY 2017 and 17 states plan to add or enhance benefits in FY 2018, most commonly for behavioral health/substance use disorder services and dental services. Thirteen states reported changes to copayment requirements in either FY 2017 or FY 2018, including new or increased copayments for enrollees with income above 100 percent FPL, for non-emergency use of a hospital emergency department, and pharmacy. Most states identified high cost and specialty drugs (including hepatitis C antivirals) as a significant cost driver for state Medicaid programs. The majority reported actions to refine and enhance their pharmacy programs, especially implementation of new utilization controls (e.g., prior authorization requirements, clinical edits, and quantity limits). Thirty-five of 39 MCO states reported that the pharmacy benefit was “generally carved-in.” Of these 35 states, the majority reported requirements that MCOs have uniform clinical protocols (31 states) or uniform preferred drug lists (PDLs) (19 states) that will be in place for one or more drugs as of the end of FY 2018.

What to watch: A growing number of states have chosen to adopt the CDC guidelines for the prescribing of opioid pain medications for adults in primary care settings (34 states as of the end of FY 2018). Nearly all states have various FFS pharmacy management strategies targeted at opioid harm reduction in place as of FY 2017, including quantity limits (48 states); clinical criteria claim system edits (46 states); step therapy (34 states); and other prior authorization requirements (32 states). Somewhat fewer states (28 states) reported requirements in place for Medicaid prescribers to check their states’ Prescription Drug Monitoring Program before prescribing opioids to a Medicaid patient. Among the 35 states that used MCOs to deliver pharmacy benefits, 24 reported that they required MCOs to follow some or all of their FFS pharmacy benefit management policies for opioids. For FY 2017, the vast majority of states (46 states) reported that naloxone (a prescription opioid overdose antidote) was available in at least one formulation without prior authorization (PA) and most states (42) also covered the naloxone nasal spray formulation without PA. The standard of care for opioid use disorder is medication-assisted treatment (MAT), which combines psychosocial treatment with medication. All 49 states that responded to a new question about medication-assisted treatment (MAT) drugs reported coverage of buprenorphine and both oral and injectable naltrexone, but a somewhat smaller number (36 states) reported coverage of methadone in FY 2017.4

Medicaid is constantly evolving as policymakers strive to improve program value and outcomes through delivery system reforms, respond to economic conditions or public health concerns (such as the opioid epidemic), or implement federal policy changes including those in the ACA or other regulatory changes (like the recent Medicaid managed care rule). As states began FY 2018, Congress was debating major ACA repeal and replace legislation generating great uncertainty for states around Medicaid including the future of the ACA and financing for the Medicaid expansion as well as overall financing for the overall Medicaid program. On this year’s survey, Medicaid directors were asked to comment on state-specific implications of federal proposals. Most Medicaid directors from the 32 ACA Medicaid expansion states reported that they would not be able to continue covering the expansion population, or that coverage would be at substantial risk, if the ACA enhanced federal match for this population were terminated. Almost all Medicaid directors expressed concern about the likely negative fiscal consequences tied to proposed limits on federal Medicaid spending. Some directors mentioned that they welcomed potential new state policy flexibility under federal legislative proposals, but a greater number of Medicaid directors expressed concern that proposals to convert Medicaid to a per capita cap or block grant would not provide sufficient flexibility to enable states to make up for the reduction in federal funds.

Despite the uncertain policy environment, many states continue efforts to expand managed care, move ahead with payment and delivery system reforms, increase provider payment rates, expand benefits, and expand community-based LTSS. Emerging trends from this year’s survey include proposals to restrict eligibility (e.g., work requirements) and impose premiums through Section 1115 waivers, movement to include value-based purchasing requirements in MCO contracts, and efforts to combat the growing opioid epidemic. Key areas to watch include federal legislative efforts to restructure and limit federal Medicaid financing as well as Section 1115 waiver activity (state waiver proposals and CMS approvals). These issues will have implications for states, providers, and beneficiaries that could shape the future of the Medicaid program in FY 2018 and beyond.