Plans are using provider payment as a policy lever to facilitate access to care. Two-thirds of plans in the survey reported that they currently use payment incentives related to access to care (Figure 16), and about an equal share plan to implement new or additional access-related payment incentives in the upcoming year. About a third of plans reported using payment incentives for providers to have same-day or after-hours appointments. A majority of plans (67%) said that they either already use (62%) or plan to use (42%) enhanced payment rates for hard-to-recruit provider types, and 34% reported using (33%) or planning to use (21%) enhanced payment for providers in rural or frontier areas. 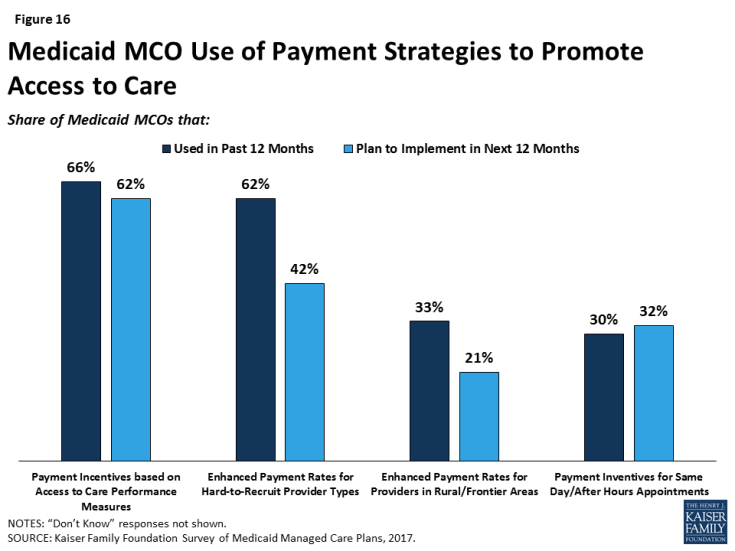 Figure 16: Medicaid MCO Use of Payment Strategies to Promote Access to Care

While most plans have continued paying providers through the traditional FFS method, nearly all plans have also adopted new systems of payment by using APMs to reward providers for meeting quality and, in some cases, cost-based benchmarks. These approaches are not mutually exclusive, as APMs can build on FFS payment, and multiple APMs can be utilized simultaneously. Ninety-eight percent of plans in the survey reported using at least one APM for at least some providers (Figure 17). The vast majority of plans (93%) reported using incentives and/or bonus payments tied to specific performance measures (so-called “pay-for-performance”), which involve limited or no provider financial risk. Fewer plans reported using APMs that typically transfer more risk to providers, such as bundled or episode-based payments (38%) and shared savings and risk arrangements (44%), which may be more resource-intensive to design and implement. 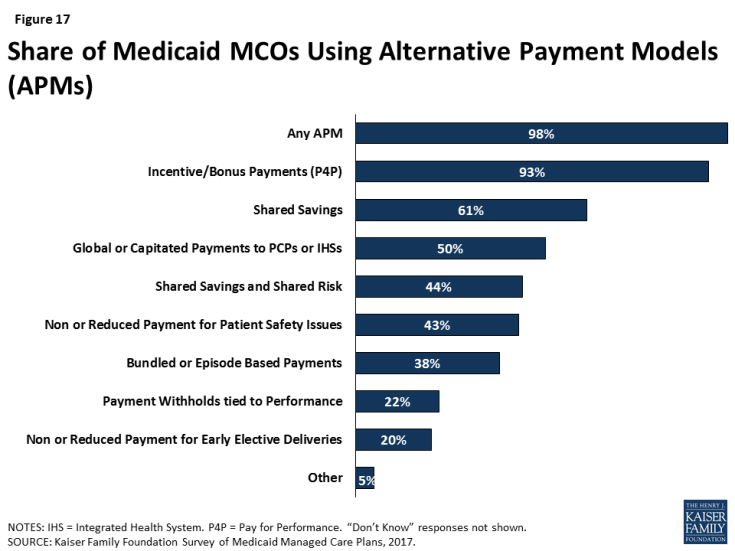 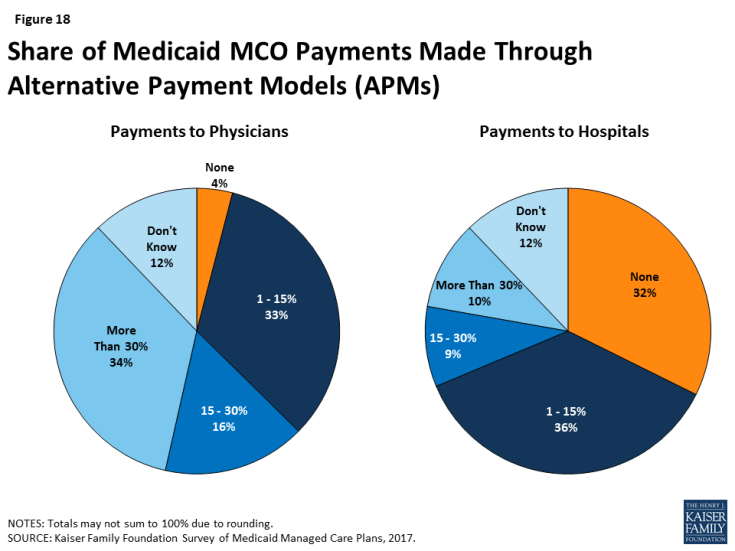 Plans also reported interest in delivery system models that build on new payment models, such as ACOs and PCMHs. Both ACOs and PCMHs aim to create patient-centered and coordinated care delivery systems (see Box 1 for definitions) by increasing provider responsibility for quality, efficiency, and patient outcomes. Twenty-eight percent of plans in the survey reported contracting with an ACO, and roughly one-third of remaining plans are considering contracting with ACOs in the future.4 Not surprisingly, plans contracting with ACOs are more likely than plans overall (89% versus 73%) to be using shared savings and/or shared savings and risk arrangements, which are a core feature of ACOs, and are more likely to make a larger share of payments to hospitals through APMs (41% making at least 15% of hospital payments through APMs versus 19% of all plans, data not shown). Additionally, about a third of plans that do not contract with ACOs reported using shared savings and/or shared risk arrangements. These plans may be using shared savings or shared risk payment models with other provider types and/or other delivery system reform efforts, including PCMH models. Overall, 69% of plans reported offering their beneficiaries enrollment in PCMHs.5 It is unclear how many members are covered by these new payment and delivery system arrangements. For example, while a majority of plans offer PCMH to their members, only 26% of plan respondents reported that at least half of their Medicaid members are served through such arrangements.

In addition to contracting with ACOs and PCMHs, plans are using a variety of other strategies to coordinate care for beneficiaries (Figure 19). Plans reported wide usage of these strategies, with most plans using chronic disease management, peer support or health coaches, interdisciplinary care teams, or individualized care plans for all members on an as-needed basis. Other strategies, such as complex case management and home visits, are more likely to be offered to high-risk members only (54% and 55% of plans, respectively). In their efforts to target high-risk members, plans also offer population-specific services (data not shown). For example, more than 80% of plans reported offering case management or care coordination to homeless individuals, and approximately three-quarters of respondents reported conducting outreach to members or potential members who are homeless to assist with health care access. 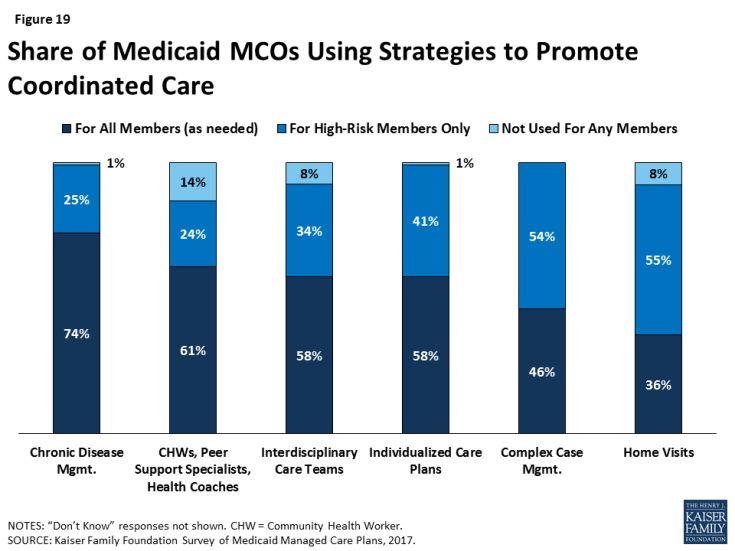