As Medicaid managed care has developed over the past several decades, the plans serving Medicaid enrollees have developed as well. Some of these changes reflect changing federal rules and state policies, which allowed plans to focus primarily on Medicaid, permitted states to require mandatory enrollment in managed care, and expanded the geographic areas and beneficiary groups included in managed care. The characteristics of plans serving Medicaid enrollees — such as organization type, lines of business, geographic scope, and experience in Medicaid — may influence or reflect plans’ ability to ensure enrollees’ access to care. For example, some Medicaid enrollees have special needs that may be best served by small, focused plans specifically designed to care for populations with complex needs or by plans with long experience serving the Medicaid population. Other Medicaid beneficiaries may have health needs similar to the population covered by private insurance, or they may be covered by more than one type of insurance, and could be best served by plans that span public and private markets. In addition, plans that cover a broad range of services may help facilitate coordination of care, while plans that cover a more limited range of services may focus attention on acute care and rely on specialty plans or subcontractors to manage other services.

Managed care plans enrolling Medicaid beneficiaries are typically focused on serving this population or other markets serving low-income individuals enrolled in public coverage. Nearly two-thirds of responding plans (64%) are Medicaid-only (100% of plan enrollment consists of Medicaid enrollees) or Medicaid-dominated (Medicaid accounts for 75% to 99% of total plan enrollment); we refer to these two groups of plans (those for whom Medicaid accounts for at least 75% of total enrollment) as “Medicaid focused” plans. An additional 7% of plans reported that Medicaid accounts for at least half of total plan enrollment (Figure 1). MCOs that participate in other lines of business besides Medicaid are more likely to offer products in public insurance (CHIP, Medicare) or ACA marketplaces than in the employer or individual market (Figure 1). Thus, these plans may have expertise in serving the unique needs of low-income populations, serving groups whose coverage status may change with modest income fluctuations, or coordinating care across payers. 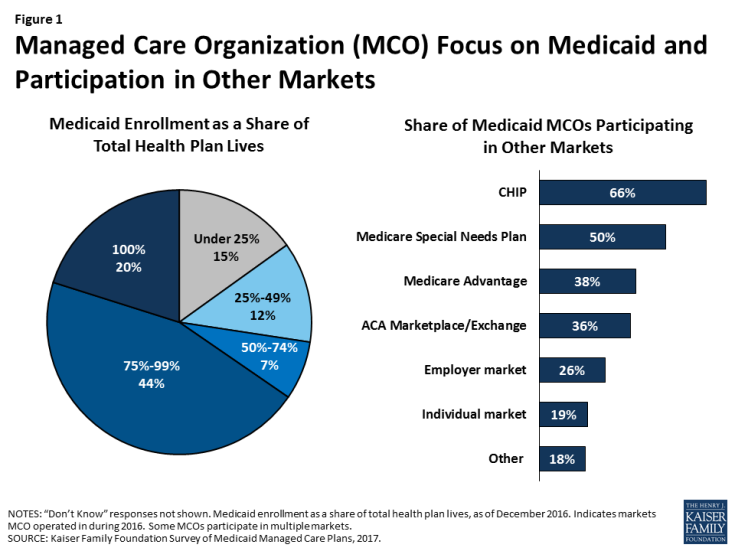 Figure 1: Managed Care Organization (MCO) Focus on Medicaid and Participation in Other Markets

Most Medicaid MCOs responding to the survey have a long history of participating in Medicaid, are likely to be non-profit, and are not offered statewide (Figure 2). Most (70%) plans have been participating in the Medicaid program for 10 or more years, a plurality (45%) are private non-profit, and the vast majority (73%) do not operate in all geographic areas of the state.2 Geographic scope of plans likely reflects state contracting policy, as many states contract with plans at the county or regional level rather than the state level. Plans in which Medicaid enrollment accounts for at least 75% of covered lives (“Medicaid-focused plans”) were less likely than other plans to be private non-profit plans (34% versus 63%) and more likely to be government plans (15% versus 5%), other types3 (17% versus 3%), or private for-profit (34% versus 26%) (data not shown). In addition, Medicaid-focused plans were more than twice as likely as other plans to be offered statewide (34% versus 13%). There were not differences in length of time in the Medicaid market for Medicaid-focused plans versus other plans. 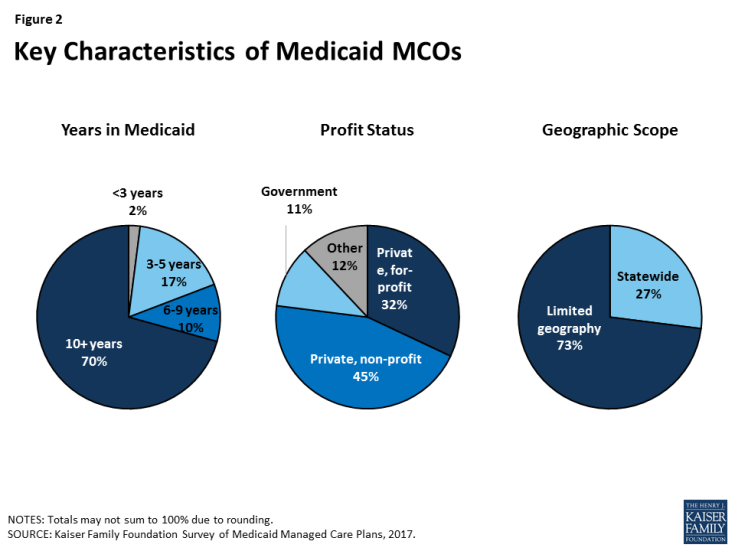 Comprehensive Medicaid managed care plans are serving a broad range of populations, including many populations with special health needs. Though plans are focused in terms of the geographic market they serve, they typically serve a broad range of enrollee groups. Nearly all responding plans enroll pregnant women, children, non-disabled adults, and ACA adults (if they operate in a state that expanded Medicaid) (Figure 3), groups that private insurance also generally enrolls. However, most Medicaid plans also enroll special needs populations such as people with HIV/AIDS, people with disabilities, dual eligible individuals, children with special health care needs, and children in foster care. Some Medicaid plans identify as “specialty plans” designed specifically to serve a targeted population, but, notably, rates of covering special needs populations were high even among non-specialty plans (Figure 4). For example, 92% of plans cover people with HIV/AIDS, but only 10% of plans identify as specialty plans focused on this population (Figure 4). Similarly, all self-identified specialty plans enroll multiple populations, including populations outside of their specialties. 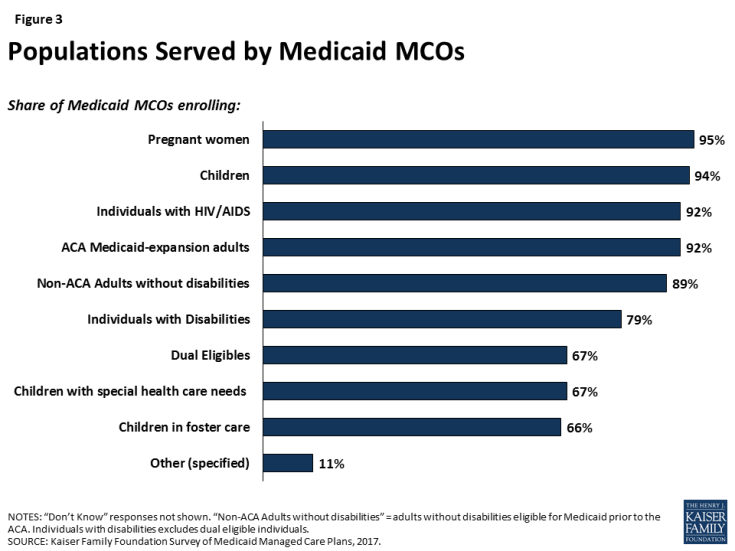 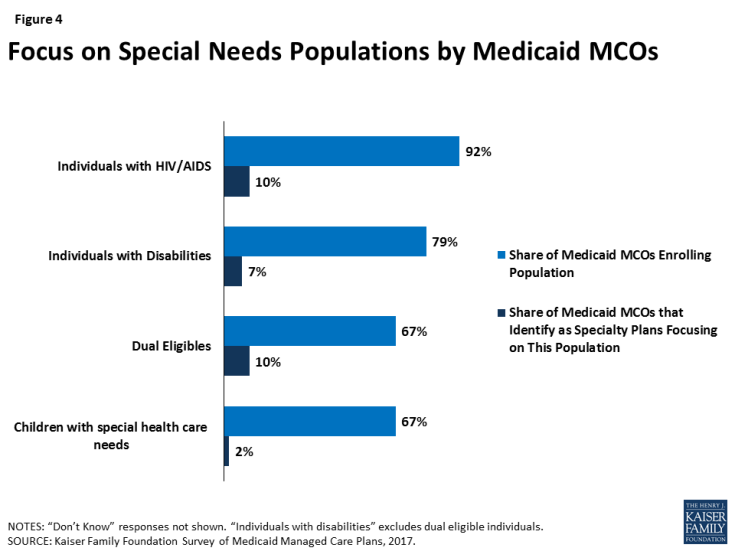 Although responding plans’ contracts with states frequently include comprehensive Medicaid benefits including physical health, behavioral health, prescription drugs, dental services, and long-term services and supports (LTSS), many plans subcontract some of these services to other entities. Some states “carve out” certain benefits from their contracts with Medicaid MCOs. These carved-out benefits may be provided and financed under a separate state contract with a limited-benefit prepaid health plan (PHP) or on a fee-for service basis. Alternatively, states may include these services in their contracts with MCOs, who in turn decide whether to manage them in-house or subcontract with PHPs to provide such benefits. State carve-outs or plan subcontracting may fragment care, as enrollees (and payers) have multiple plans to coordinate; on the other hand, carve-outs and subcontracts could place management of a particular benefit in the hands of a plan specifically focused on that clinical area.

Most responding plans reported that their state contracts include a broad range of services, including services that states most commonly opt to carve-out. Specifically, most plans include prescription drugs (93%), non-emergency medical transportation (NEMT, 77%), dental services4 (66%), or LTSS (63%) in their contract with the state (Figure 5), and over a third of plans (36%) include all four of these services (data not shown). However, plans are likely to subcontract these services for at least some of their enrollees, and only 7% of plans cover all four services and manage them internally (i.e., don’t subcontract) (data not shown). Plans are more likely to subcontract dental, NEMT, and prescription drug services than LTSS. This pattern may reflect state and plan efforts to integrate LTSS and acute care services. Notably, all specialty plans for people with disabilities or dual eligible individuals cover LTSS, and plans (specialty or not) that serve dual eligible individuals are more likely to include LTSS than plans overall (72%, data not shown). 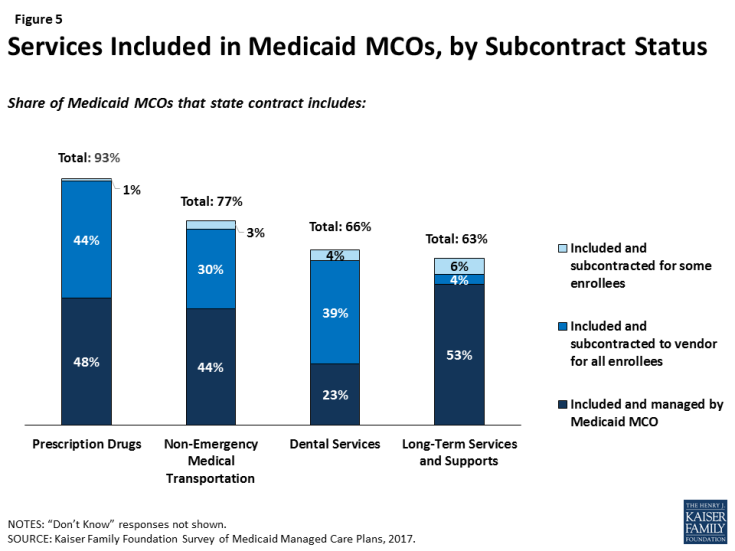 Similarly, a majority of responding plans’ contracts with states include at least some mental health or substance use treatment services, including inpatient and outpatient services (Figure 6). Plans whose state contract include behavioral health services are more likely to provide these services through their own plan (versus subcontracting), possibly indicating efforts to integrate physical and behavioral health services. 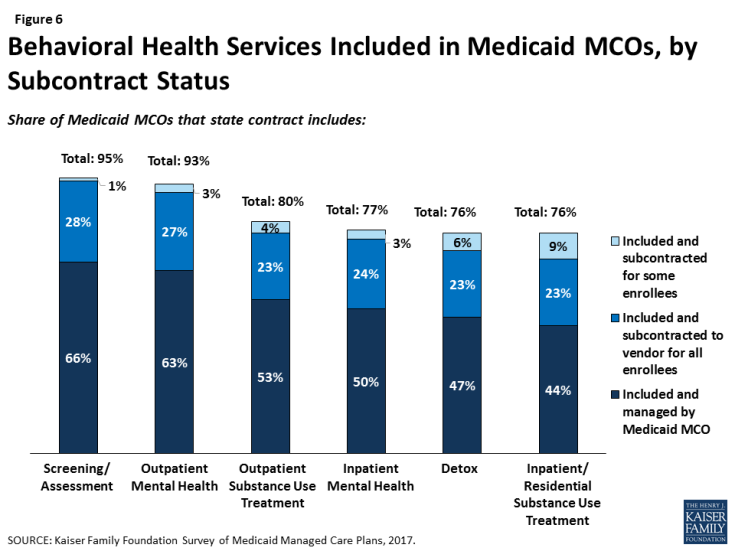