Though research indicates that, overall, most primary care providers and specialists accept Medicaid,1 provider participation in Medicaid is a subject of much debate. Providers are less likely to accept new Medicaid patients than new patients insured by other payers,2 and lower participation rates among some types of specialists remain an area of concern. In addition to provider participation, provider supply shortages in a particular state or region (especially rural areas) can affect enrollee access to care, as only 11 states currently meet at least two-thirds of their residents’ need for health professionals.3 Plan efforts to recruit and maintain their provider networks can play a crucial role in determining enrollees’ access to care through factors such as travel times, wait times, or choice of provider.

Plans report more challenges in recruiting specialty providers than primary care providers to their networks. Eight in ten plans that responded to the survey said that it is somewhat or very difficult to recruit adult (80%) or pediatric (81%) subspecialists to their networks, compared to 40% reporting such difficulty for primary care providers, 50% for obstetrician/gynecologists, and 32% for pediatricians (Figure 7). Among plans that contract with dentists, more than half reported difficulty in recruiting dentists. 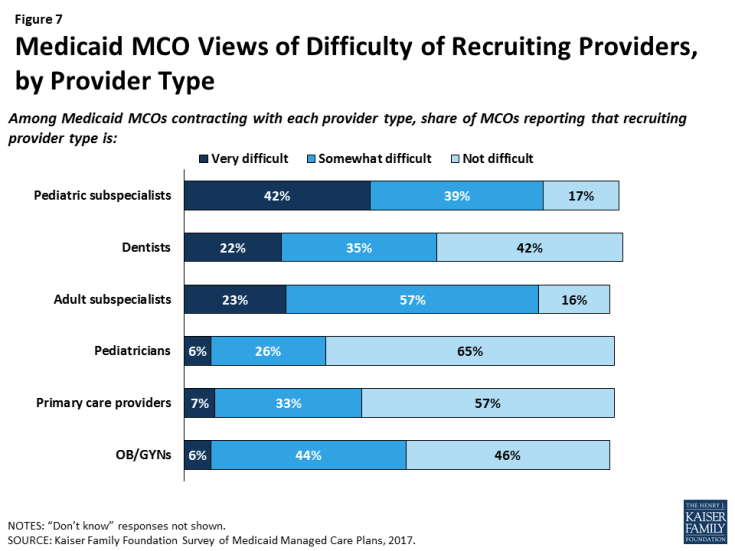 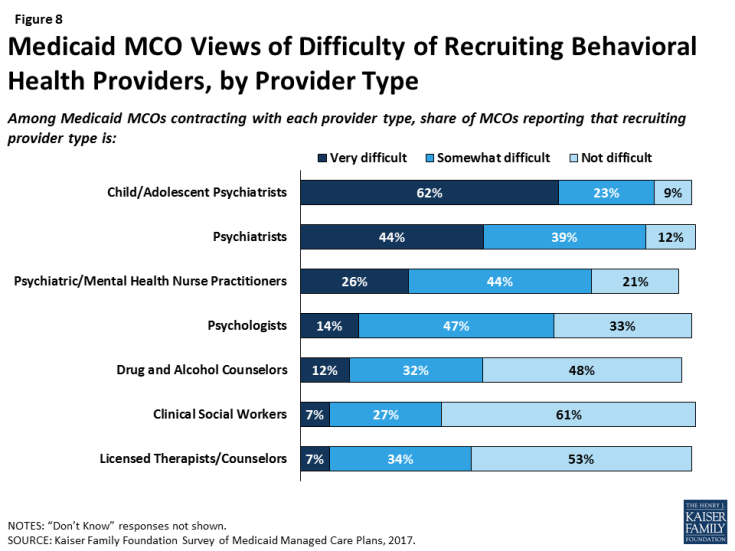 Similarly, plans reported contracting with a range of facility types, but some specialty facilities are less likely to be included in plan networks than general facilities. For example, at least nine out of ten responding plans reported contracting with general service facilities such as community health centers, academic medical centers, urgent care clinics, public hospitals, and behavioral health centers. Smaller shares — though still a majority — reported contracting with specialty facilities such as HIV/AIDS service organizations, family planning clinics or Planned Parenthood, or methadone clinics (Figure 9). While these differences may reflect plan focus or specialty to some extent, patterns remain similar when looking only at plans that provide a specialty service or serve a specialty population. For example, only two-thirds of plans that provide outpatient substance use disorder services reported contracting with methadone clinics and/or medication assistance treatment (MAT) facilities, and only 68% of plans that serve people with HIV/AIDS contract with HIV/AIDS service organizations (data not shown). It is not clear from survey results why certain facility types may not be included in plan networks; plans may exclude certain facilities or facilities may decline to contract with Medicaid MCOs. 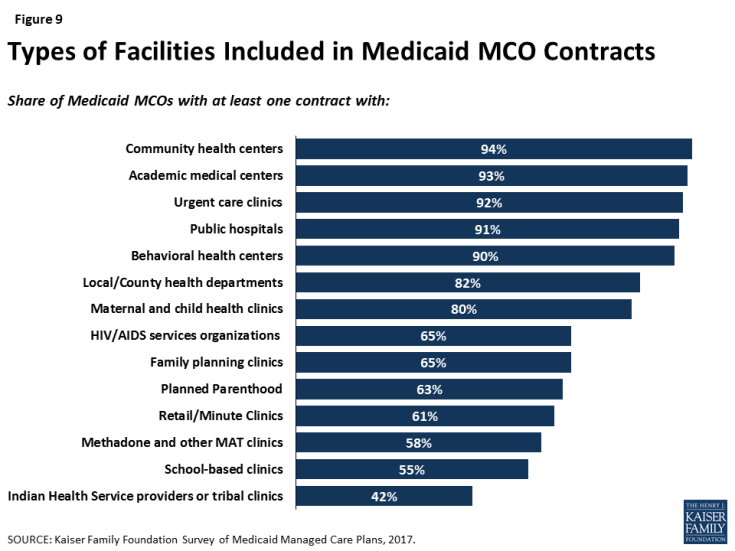 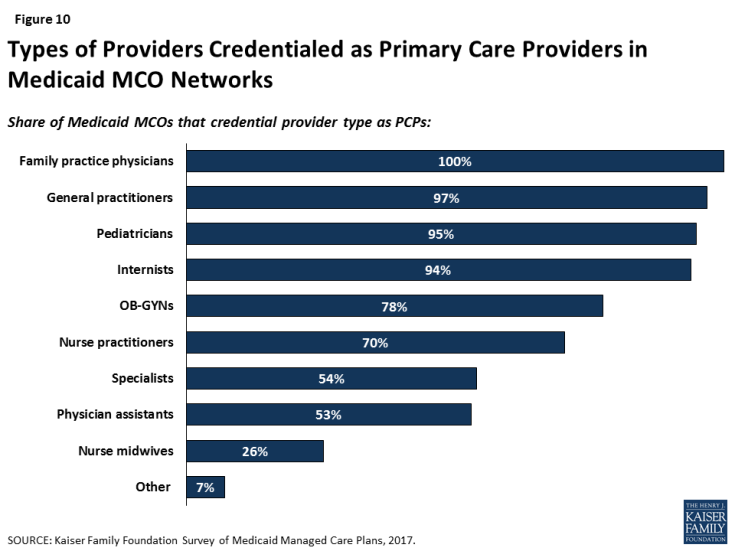 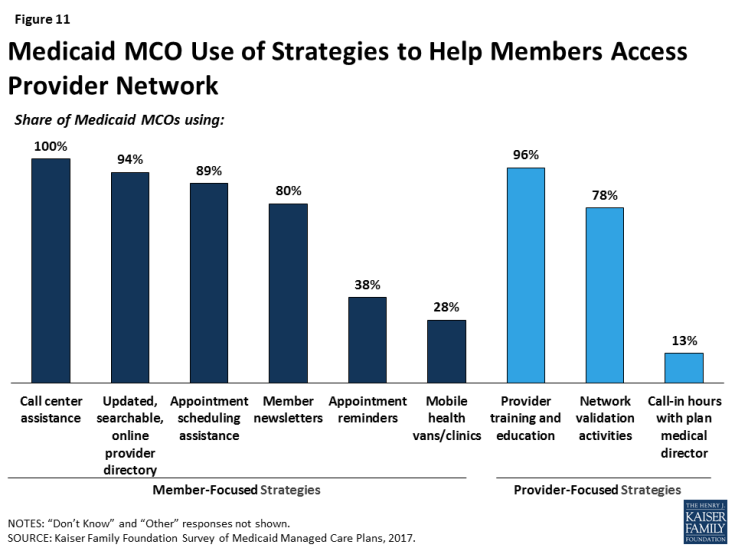 Responding plans reported a variety of strategies to address provider network issues. Among the strategies that plans use to recruit and retain providers, responding plans most frequently reported using direct outreach to providers (84%) and provider hotlines (74%), and more than half of responding plans reported using improved administrative actions (e.g., auto-assignment of enrollees, streamlined reporting or credentialing systems, or streamlined referral practices) to recruit and retain providers (Figure 12). Plans also reported using payment or financial strategies, such as sign-on bonuses (70%), prompt payment policies (69%), or payment rates comparable to Medicare or commercial insurance (44%), as incentives to recruit and retain providers. As discussed in more detail below, a majority of plans said that they either already use or plan to use enhanced payment rates for hard-to-recruit provider types, and about a third reported using or planning to use enhanced payment for providers in rural or frontier areas. Though it was not clear based on survey results whether plans are using payment levels more broadly as an incentive for provider participation, about four in ten plans reported that they directly negotiate rates with providers rather than set them based on existing Medicaid or Medicare fee schedules (data not shown). 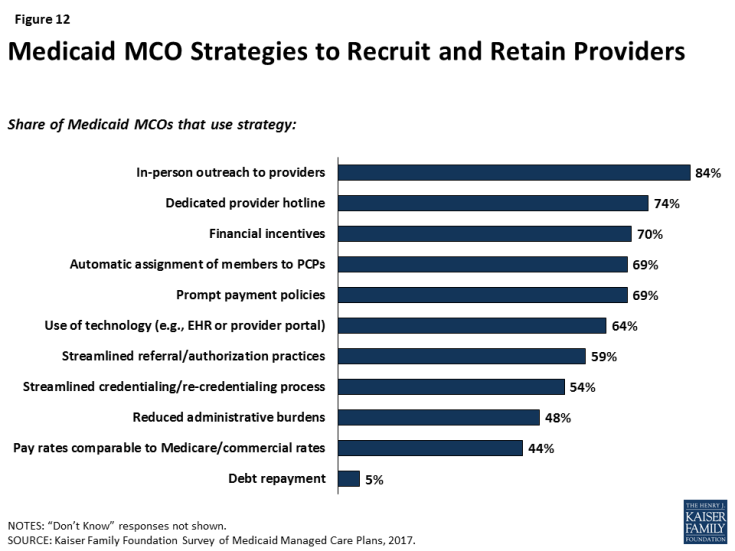 Another strategy to address network issues is the use of telemedicine. More than two-thirds (68%) of responding plans reported using telemedicine in at least one area (Figure 13), with plans most likely to use telemedicine in mental health or substance use disorder counseling. This focus could reflect particular difficulty in recruiting psychiatrists to plan networks. Under the 2016 managed care rule, CMS has noted that plans may use telemedicine to meet network adequacy requirements, though plans may be subject to state requirements related to the use of telehealth as well as state-defined (within federal parameters) network adequacy standards.6 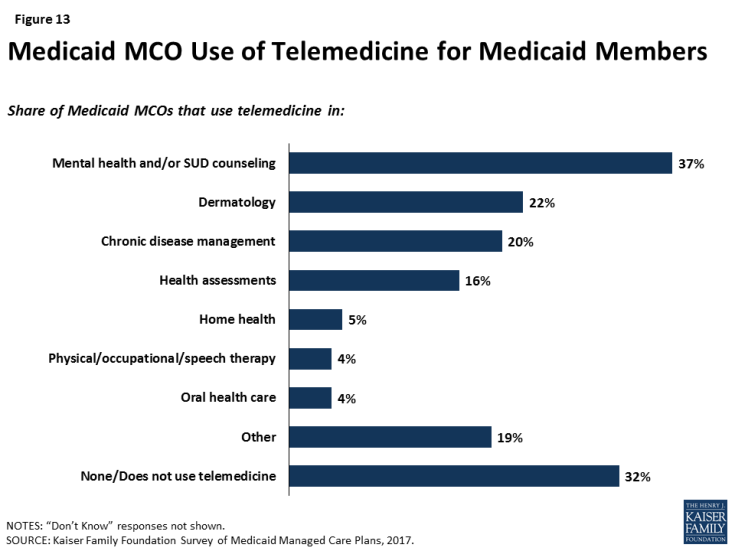 Figure 13: Medicaid MCO Use of Telemedicine for Medicaid Members

The expansion of Medicaid under the ACA led to some concern about strains on provider capacity due to increased health coverage. Among responding plans operating in states that expanded Medicaid, more than seven in ten reported that they expanded their provider networks between January 2014 and December 2016 to serve the newly-eligible population. Plans were more likely to report adding primary care providers (59%) and specialists (56%) than mental health (48%) or substance use disorder treatment (35%) providers.7

Plans were more likely to cite provider supply shortages than low provider participation in Medicaid as a top challenge in ensuring access to care. When asked broadly about top challenges in ensuring access to care for members, provider issues were among the top issues ranked by plans (Table 2). However, plans responding to the survey were more than six times more likely to cite issues with provider supply than issues with provider participation in Medicaid, suggesting that challenges in recruitment and network adequacy are linked to broader market trends. Similarly, when asked about overall priorities, plans were much less likely to rank network-related activities (such as provider recruitment) than other issues.