There have been significant federal Medicaid policy developments in recent years that have implications for Medicaid MCOs, including the introduction of the Affordable Care Act’s (ACA) effectively optional Medicaid expansion in 2014 and the finalization of federal regulations governing the operation of Medicaid managed care in 2016.1 Additionally, since the Trump Administration took office in 2017, there have been several legislative attempts to repeal and replace the ACA and cap federal Medicaid financing. The Trump Administration is also using administrative action, including the use of Section 1115 Medicaid demonstration waivers,2 to make changes to the Medicaid program and longstanding Medicaid policy. These policy actions may affect the populations served by MCOs, plan operations and finances, or funding levels available for payments to MCOs.

The ACA Medicaid expansion has had many positive effects on Medicaid managed care plans but does not appear to be a main driver in their decision to participate in the Medicaid market. Most Medicaid expansion states contract with MCOs to serve a large share of Medicaid beneficiaries, including those newly eligible under the ACA.3 Plans reported substantial increases in enrollment under the ACA. Across all states (i.e., expansion and non-expansion states), 62% of responding plans indicated their Medicaid MCO’s enrollment increased by more than 20% between January 1, 2014 and December 31, 2016 (Figure 20). Nearly two-thirds of plans in expansion states said that the expansion has had a positive effect on their financial performance. Legislative proposals introduced in 2017, as well as provisions in President Trump’s proposed FY2019 budget, included options to repeal and potentially replace the ACA, which could have significant implications for the number of lives covered by MCOs as well as the case mix of Medicaid beneficiaries served by MCOs. However, fewer than 10% of plans said that they are very or somewhat likely to rethink their participation in Medicaid if the ACA expansion were repealed, perhaps reflecting responding plans’ long tenure in the Medicaid market and participation even before the ACA was passed. 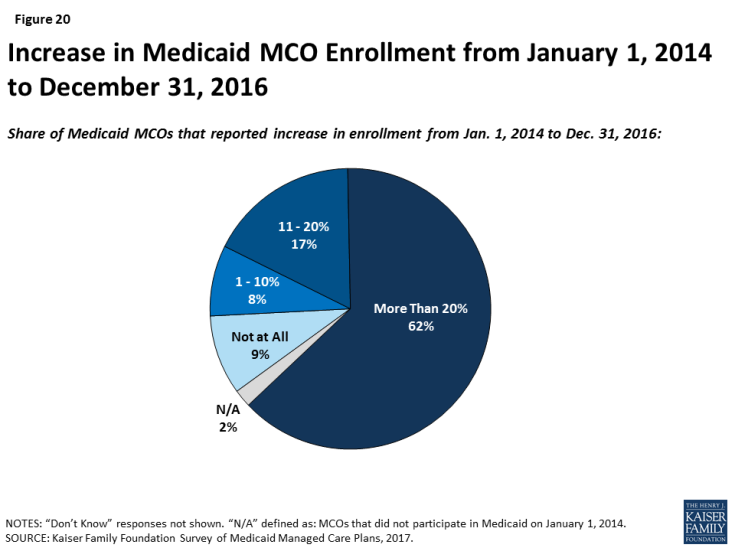 “If state Medicaid programs are subject to spending limits, either aggregate or per capita, that do not take into account actual trend in health care inflation, then it seems likely that this will have – at least – a chilling effect on provider and plan rates. This would constrain states, and by extension plans, to the point that services and enrollment might have to be curtailed.”
–

“We anticipate benefit reductions would be required under federal block grants or per capita caps to states. Efforts to address the social determinants of health would also be impacted if not stopped altogether.”

Plans indicate a host of concerns related to policies debated by Congress that would restructure federal Medicaid financing as block grants or per capita caps. Legislative proposals introduced in 2017 called for fundamental changes in Medicaid financing that could limit federal financing for Medicaid through a block grant or a per capita cap.4 Plans responded to an open-ended question that asked what the most significant implications would be for MCOs if federal financing were restructured as a federal block grant or per capita cap to states. Plans were nearly universally negative about these proposals. Although several plans indicated that their response would depend on the construction of the model (including base year calculation, inflationary trend rate, etc.), generally, many MCOs indicated that they anticipate that states will not be able to make up for federal funding losses under a block grant or a per capita cap structure. As one respondent stated, “Loss of funding would negatively impact [our] ability to cover members and provide necessary benefits.” Many plans said that they expect these proposals to lead to MCO funding cuts/lower capitation rates, and MCOs anticipate that states will request more flexibility from CMS to cut eligibility levels and benefits. A few plans also specifically indicated that a block grant or per capita cap may put them at risk financially, may lead to negative margins, may compromise the actuarial soundness of capitation rates, and ultimately, may lead some MCOs to leave the market. Responses also described a multitude of anticipated beneficiary impacts. Plans enumerating anticipated beneficiary consequences most frequently cited eligibility changes that may lead to decreased enrollment, decreased or reduced benefits, and provider rate cuts that may lead to reduced provider participation/access.

The survey also asked plans what measures they might take if they were faced with more limited Medicaid capitation rates. Many plans indicated that they would likely pass these rate cuts on through reduced payments to providers or utilization controls on enrollees (i.e., increase prior authorization, utilization management, or other requirements) (Figure 21). Examples of “other” measures specified by plans include reducing community involvement/investments, restricting provider networks, reducing member “extras,” and reducing marketing activities. 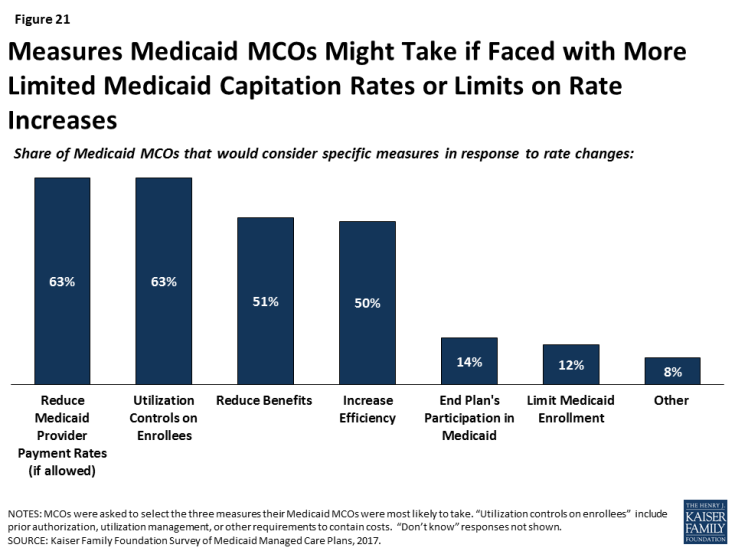 For most changes being discussed under Section 1115 waiver proposals, plans reported concern over potential implications for enrollee coverage/access. Section 1115 authority permits the Secretary of Health and Human Services to allow states to use federal Medicaid and CHIP funds in ways not otherwise allowed under the federal rules, as long as the Secretary determines that the initiative is an “experimental, pilot, or demonstration project” that “is likely to assist in promoting the objectives of the program.” Shortly after taking office in 2017, the current Administration signaled a willingness to expand the use of Section 1115 Medicaid waivers or approve waivers with provisions never approved before, including conditioning Medicaid eligibility on meeting work requirements.5 Plans were asked whether waiver provisions being considered by states, including work requirements, increased premiums, lock-outs for unpaid premiums, increased cost-sharing, or elimination of non-emergency medical transportation (NEMT), would have the greatest impact on plans or enrollees, or whether plans anticipate that these provisions would result in no impact. Fewer than 10% of plans said that they anticipate that waiver provisions will have no impact (Figure 22). Rather, most plans stated that each of the waiver provisions would have the greatest impact on enrollees through coverage or access to care, versus on plans through administrative burden or financial performance. Although relatively few plans reported that provisions would have the greatest impact on plans (versus enrollees), more than one-third of plans indicated that increasing cost-sharing would have the greatest impact on plans (administrative burden or financial performance). 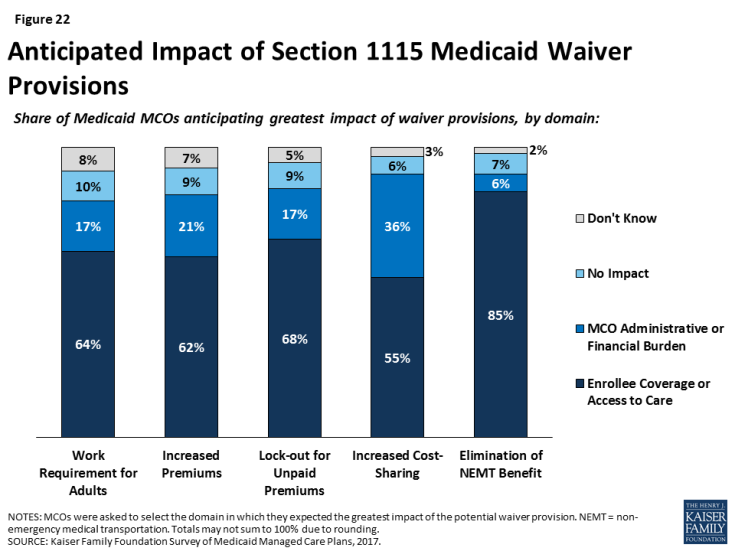 A majority of plans reported needing at least some additional guidance to implement many of the 2016 Medicaid managed care final rule provisions. In May 2016, CMS issued a final rule on managed care in Medicaid and CHIP. The rule represents a major revision and modernization of federal regulations in this area.6 The general effective date of the final rule was July 5, 2016, although individual provisions of the rule take effect at different times, mostly over three years. The survey asked plans to identify the top three areas of the managed care rule that would be the most resource-intensive for them to implement (Table 6). The rule’s new quality rating system was the area that plans most commonly cited as the most and second-most resource-intensive for them to implement. Network adequacy and actuarial soundness/rate-setting were the next most common first choices, while risk adjustment and encounter data reporting were the next most common second choices. Under the new Administration, CMS announced in June 2017 that they are doing a thorough review of the managed care regulations and may use the rulemaking process7 to make modifications to the final rule. Additionally, CMS has indicated that they may offer leniency to states in meeting compliance deadlines for certain managed care regulations. 8 Plans were also asked if the change in Administration has affected their implementation timeline. Nearly three-quarters of plans reported that the change in Administration has not caused them to put a hold on activities to implement provisions of the Medicaid managed care rule.