One of the most direct ways that plans may facilitate access to care is to engage members directly in their care and help them navigate the health care system. For example, plans may tailor service delivery to meet members’ specific needs, link them to providers, and help members develop ongoing provider relationships. Plans’ direct contact with members builds on efforts to work with providers and include many strategies targeted to the needs of the population with Medicaid coverage.

Most plans reported actively conducting health assessments or data analytics to engage members, particularly high-need members, in care. As part of onboarding (enrolling members in the plan), most responding plans (77%) reported conducting conduct a health assessment1 either in person (26%) or remotely (65%), and over two-thirds of plans (69%) suggested that members make an appointment with their primary care provider (Figure 14). In addition, all survey respondents indicated that they take some action to identify high-need or high-risk enrollees, such as medical record review or data analytics (90%) or health assessments (89%). As part of either onboarding or screening for high-need enrollees, more than half of plans (59%) reported conducting an in-person health assessment at some point during the initial enrollment period. 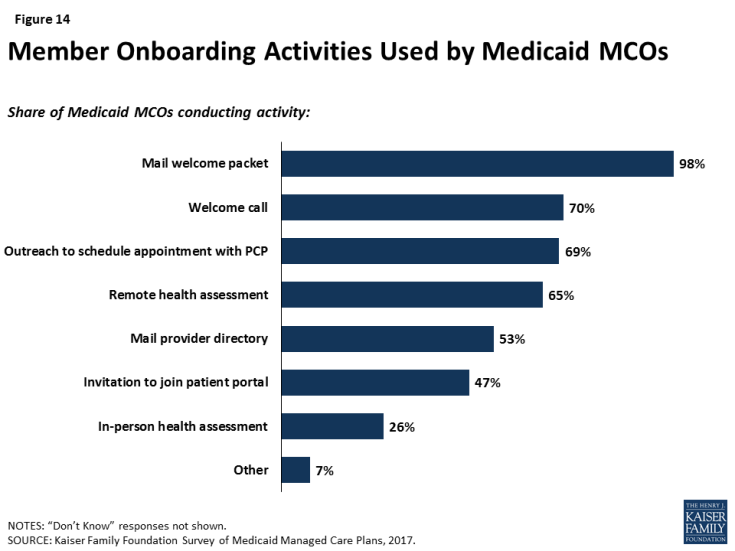 Reflecting state and federal eligibility rules, plans reported variation in churn or enrollment duration among different enrollment groups, which may pose a challenge to care continuity. Medicaid eligibility for pregnant women ends 60 days postpartum, and plans reported the shortest tenure of plan enrollment among pregnant women. Among responding plans that enroll pregnant women, more than a third said that pregnant women are typically enrolled for less than 12 months (Figure 15) (and excluding plans who responded “Don’t Know,” more than half said that average tenure for pregnant women is less than a year). In contrast, Medicaid eligibility for people with disabilities is often automatically linked to receipt of Supplemental Security Income, and nearly half of plans that enroll people with disabilities reported that they are typically enrolled for more than two years (again, only among plans that did not respond “Don’t Know,” this figure rises to 70%). Most plans reported that children typically remain enrolled for more than a year, but plans in states that have 12-month continuous eligibility for children were more likely to report longer average plan tenure for children than plans in states without 12-month continuous eligibility (59% of plans in states with 12-month continuous eligibility reported over 1 year of average enrollment for children vs. 40% of plans in states without 12-month continuous eligibility for children). Plans that participate in both Medicaid and Marketplaces reported moderate (31%) or insignificant (31%) churn between coverage sources (versus significant (3%) or no (6%) switching), but some plans do not track enrollment changes across their Medicaid and Marketplace products (20%) or were unable to say to what extent members moved (9%). 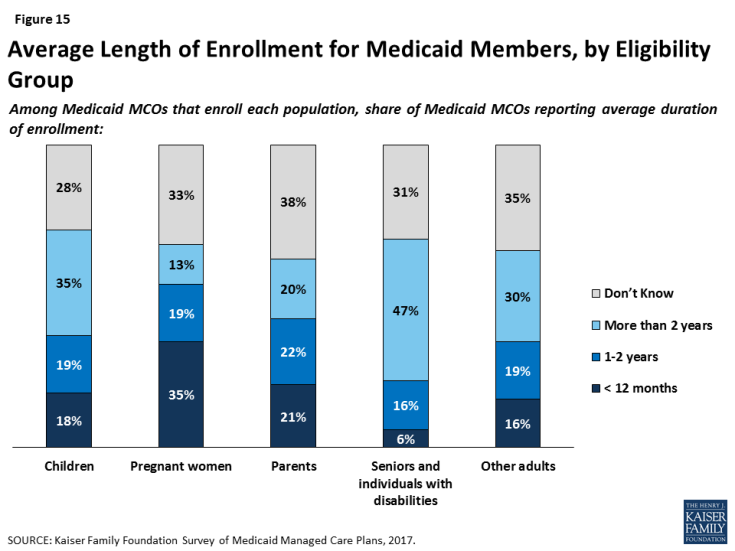 Health plans are broadening their scope beyond delivery of medical services to encourage healthy behaviors or address social determinants of health. Almost all plans responding to the survey reported offering incentives for “healthy behaviors,” with the most common incentives being those for well-child care, prenatal visits, and postpartum care (Table 3). Fewer plans — though still notable shares — reported offering incentives for chronic disease control (diabetes (57%), cholesterol (25%), and blood pressure (36%)). By far, the most common incentive is a voucher or gift card, with 91% of plans offering this type of incentive.

In addition, almost all plans (91%) reported activities to address social determinants of health, with housing and nutrition/food security reported as top targets and fewer plans undertaking activities related to education or employment (Table 4). The scope and depth of plan activities in these areas are not clear from the survey responses. Federal Medicaid reimbursement rules prohibit expenditures for most non-medical services, but plans may use administrative savings or state funds to provide these services.2,3 Nearly all plans reported working with community-based organizations to link members to social services (93%) or assessing members’ social needs (91%), and most plans also reported maintaining community or social service resource databases (81%). Again, the scope of these activities is not clear from survey responses. While some MCOs may have formal partnerships with community-based organizations, others may just make referrals to these organizations. Additionally, some of these activities are dictated by state contracts with plans: about half of MCO states required in FY 2017 (19 states) or planned to require in FY 2018 (2 states) that Medicaid MCOs screen beneficiaries for social needs and provide referrals to other services.4