Section 5: Information And The Role Of Different Groups

Interest In Getting More Information About HIV

While many gay and bisexual men say they “have all the information they need” about various aspects of HIV prevention, testing, and treatment, substantial shares say they would like to know more. At the top of the list, six in ten (60 percent) would like to have more information about medication to prevent the transmission of HIV among HIV-negative persons, and half (50 percent) say they’d like to know more about how soon to begin treatment after testing positive. About four in ten say they’d like more information about the relative risk of different sexual behaviors (40 percent) and how often to get tested (39 percent), while about three in ten want to know more about how to bring up the topic of testing with a partner (31 percent), how to talk with health care providers about HIV (31 percent), the effectiveness of condoms (30 percent), and where to go to get tested (28 percent). 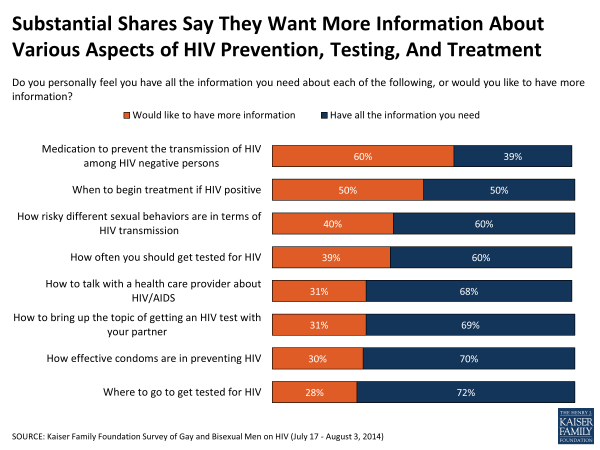 Gay and bisexual men who are members of racial and ethnic minority groups are more likely than their white counterparts to say they’d like to have more information in most of these areas. For example, 58 percent of minorities versus 31 percent of whites say they want more information about how often to get tested, and 46 percent of minorities versus 20 percent of whites want to know more about where to go to get an HIV test. These results are consistent with earlier Kaiser Family Foundation surveys of the general public, which found that African Americans and Hispanics were more likely than whites to report a desire for more HIV-related information.1

Perceptions Of Progress And Who Is Doing Enough To Combat HIV

There is a general consensus among gay and bisexual men that various groups are not doing enough to address the problem of HIV in the U.S., including Congress (74 percent say they’re not doing enough), public schools (68 percent), pharmaceutical companies (62 percent), the media (59 percent), President Obama and his administration (55 percent), religious leaders and institutions (52 percent) and businesses that target gay consumers (51 percent).

In contrast to these other institutions, 71 percent of gay and bisexual men feel that LGBT organizations are doing enough to address the problem of HIV. And as noted above, relatively few (17 percent) say lack of focus on HIV by LGBT organizations is a major reason why it has been difficult to slow the spread of HIV among gay men. Still, some would like to see more focus on HIV by gay community leaders. While a majority (56 percent) of gay and bisexual men say gay leaders are paying the right amount of attention to the issue of HIV relative to other issues, about a third (34 percent) say they’re paying too little attention. 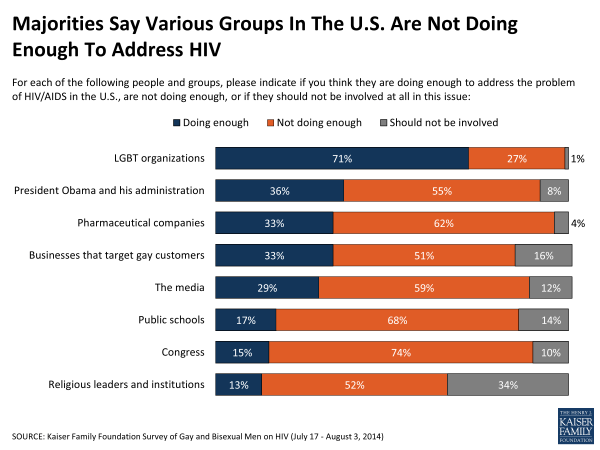 Despite a general sense that LGBT organizations are doing enough to address the problem of HIV/AIDS in the U.S., few gay and bisexual men say that they’ve personally gotten a lot of information about the disease from these organizations – or from any other source – in the past year.

The most commonly reported source of information on HIV/AIDS is the Internet (45 percent say they have gotten at least “some” information from this source in the past year), followed by LGBT media (35 percent), HIV/AIDS organizations (33 percent), LGBT community organizations (30 percent), doctors and other health professionals (29 percent), mainstream media (22 percent), and friends and family (13 percent).

Section 4: Condom Use And HIV Testing Section 6: Some Key Characteristics Of Gay And Bisexual Men