When asked about reasons why it has been difficult to reduce the spread of HIV in the gay community, gay and bisexual men see a number of factors as “major” reasons, including too many gay men not knowing their HIV status (75 percent), complacency about HIV in the gay community (62 percent), and HIV-related stigma (56 percent). Just three in ten (31 percent) see lack of understanding about how to prevent transmission as a major barrier to curbing the spread of the disease, although the survey results indicate there are significant knowledge gaps about newer prevention options available to reduce the risk of contracting HIV, namely PrEP and treatment as prevention. Few (17 percent) say that lack of focus on HIV by LGBT organizations is a major reason why it has been difficult to slow the spread of HIV among gay men.

Men of color are more likely than those who identify as white to say lack of understanding about HIV prevention is a major reason (48 versus 23 percent). 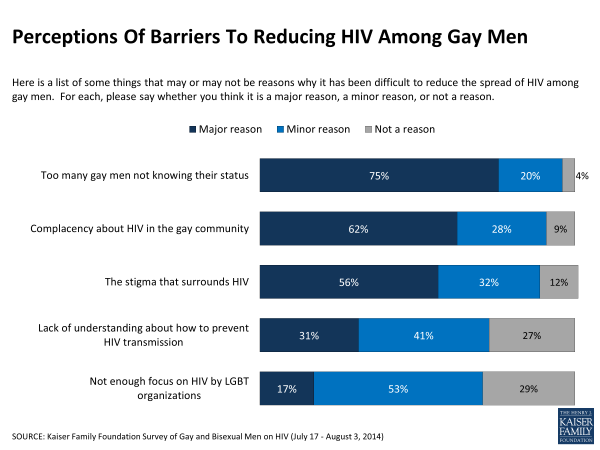 Discrimination and stigma (whether HIV-related or not) is the most frequently-named issue when asked about the most important issues facing gay and bisexual men today. When it comes to their own experiences, many report having faced various forms of stigma and discrimination as a result of their sexual orientation, including being rejected by a friend or family member (32 percent), being threatened or physically attacked (26 percent), experiencing unfair treatment from an employer (15 percent), poor treatment from a medical professional (15 percent), and discrimination in trying to find housing (7 percent).

On the topic of HIV-related stigma, about a third of gay and bisexual men say that gay men as a group and their own social circles are “very” accepting towards people with HIV, and an additional four in ten say each of these groups is “somewhat” accepting. The medical community ranks similarly high in perceived acceptance (33 percent say they are “very” accepting and 51 percent say they are “somewhat” accepting). Their own families are perceived as somewhat less accepting of HIV-positive persons (16 percent “very” and 39 percent “somewhat”). However, the large majority (77 percent) of gay and bisexual men believe the general public is unaccepting of people living with HIV. 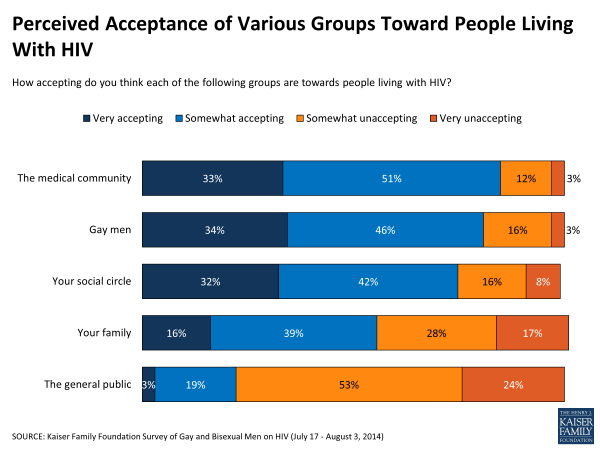 Some men do report having been in “serodiscordant” relationships – that is, where their partner’s HIV status is different from theirs. One in five (19 percent) of those who didn’t identify themselves as HIV-positive say they’ve been in a sexual relationship at some point with someone who has HIV, and another 13 percent say they’re “not sure” if they’ve ever been in such a relationship. Still, an even larger share of this group (37 percent) say that at some point they have decided not to pursue a sexual relationship with someone specifically because they were HIV-positive. 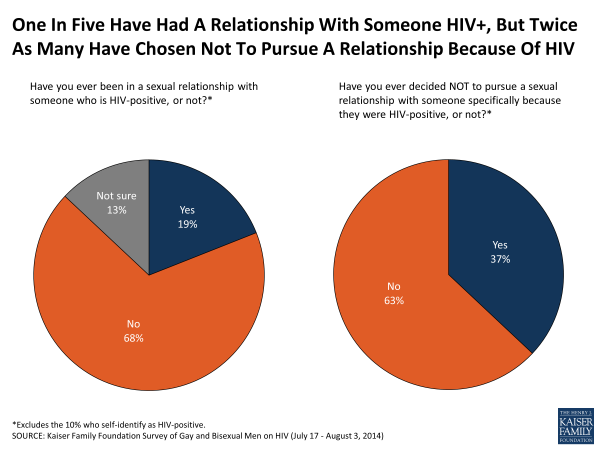 Another issue of importance is that of sexual violence, including intimate partner violence. Eighteen percent of gay and bisexual men say that at some time in their life, a person has attempted to force them to have sex or engage in a sex act against their will, including 4 percent who say this happened in the past year.

Few gay and bisexual men report talking much at all about HIV with friends or even with sexual partners. Large majorities say the topic of HIV comes up “rarely” or “never” in conversations with their friends (68 percent) or family members (84 percent). Compared with the general public, gay and bisexual men are somewhat more likely to say they discuss HIV with their friends at least “sometimes” (32 percent versus 22 percent), though they are no more likely than the general public to report discussing it with family members (15 percent versus 19 percent).

While gay and bisexual men are more likely to report discussing HIV with their sexual partners than with family and friends, still a majority (60 percent) say they “rarely” or “never” discuss the topic with their long-term partners, and half (50 percent) say the same about their casual partners. While these conversations may not be occurring with frequency, gay and bisexual men are more likely than the general public to report talking with sexual partners about HIV. Among adults in general, more than eight in ten (82 percent), say the subject of HIV/AIDS “rarely” or “never” comes up in discussions with their spouse or other intimate partners. 1

Asked more specifically about discussions at the beginning of new relationships, most gay and bisexual men (61 percent) say they ask a person’s HIV status before beginning a sexual relationship “always” or “most of the time,” although nearly four in ten say they don’t routinely ask, including 22 percent who say they “never” do so.2 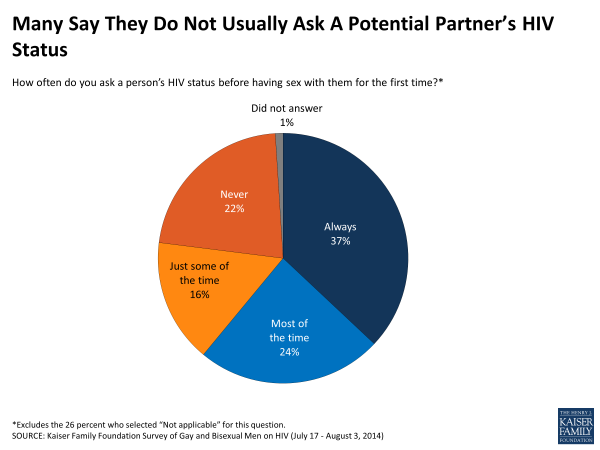 Section 2: Awareness And Opinions About HIV Prevention And Treatment Section 4: Condom Use And HIV Testing