Section 1: Importance Of HIV/AIDS As An Issue, Personal Concern, And Personal Connections

HIV/AIDS As An Issue Facing Gay And Bisexual Men

Men in the United States who identify as gay or bisexual see HIV/AIDS as the number one health issue, and as a top priority among overall issues facing their community today. When asked in their own words to name the most important issue facing gay and bisexual men today, 20 percent name HIV/AIDS, ranking behind discrimination/lack of acceptance (43 percent) and roughly equal to two other issues: equal rights (26 percent) and marriage equality (24 percent). Asked specifically about health issues affecting gay and bisexual men, HIV is by far the number one issue at 52 percent, followed by other sexually transmitted diseases (28 percent). Smaller shares name safe sex in general (9 percent), mental health (8 percent), and drug use (8 percent).

Asked about a variety of policy issues affecting gay and bisexual men, just over half (54 percent) say efforts aimed at prevention and treatment of HIV should be a top priority, while nearly as many say the same thing about efforts to combat bullying and violence directed at LGBT youth (51 percent) and equal employment rights for LGBT people (47 percent). Slightly fewer see legal gay marriage (40 percent) and adoption rights for same-sex couples (29 percent) as top priorities, though it should be noted that large majorities see all of these priorities as at least “very important.”

In addition to seeing HIV as a priority for their community, about half of gay and bisexual men (49 percent) say HIV/AIDS is a “very” or “somewhat” significant issue for them personally, while the other half (51 percent) say it is “not too significant” or “not a significant issue” in their lives. Men who are members of racial and ethnic minority groups, as well as those who say they know someone living with HIV, are more likely than whites and those who don’t know someone living with the disease to say that HIV/AIDS is a significant personal issue. 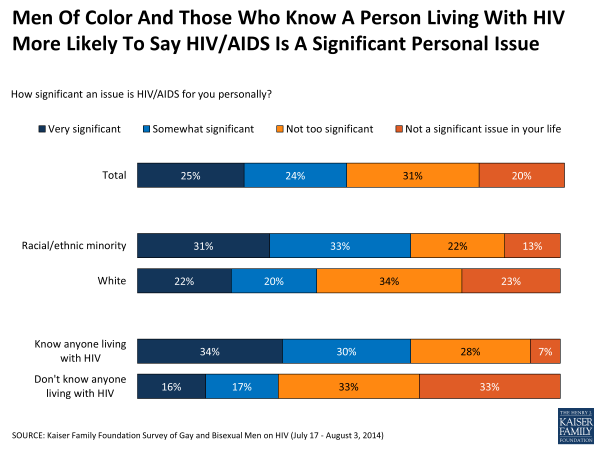 Many are unaware that HIV infections are increasing among gay and bisexual men, the only risk group for which this is true in the United States.1 Just about a third (32 percent) know that the number of new infections each year among gay and bisexual men is increasing, while 22 percent think the number is decreasing, 26 percent say it’s staying about the same, and one in five say they don’t know. Men who identify as gay are somewhat more likely to know that new HIV infections are increasing compared with those who identify as bisexual (36 percent versus 22 percent). 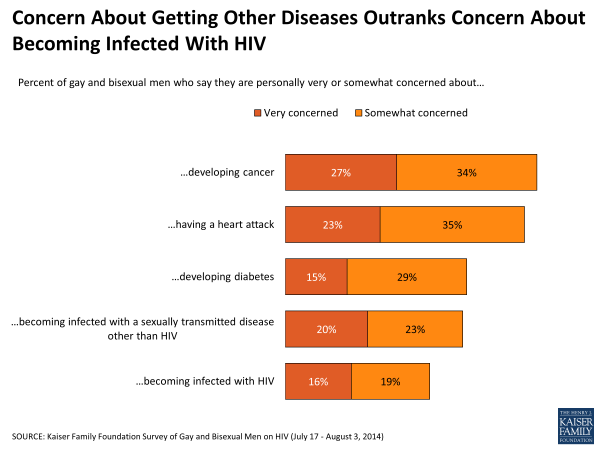 Gay men of color are almost twice as likely their white counterparts to say they are at least somewhat concerned about becoming infected with HIV (53 percent versus 28 percent).2 Similarly among the general population, Black Americans are more likely than whites to say they’re personally concerned about becoming infected (36 percent versus 14 percent).3 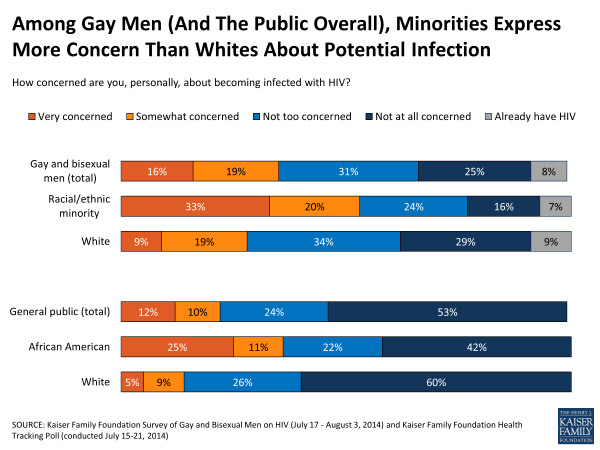 Among gay and bisexual men, there is a large generational divide in the share saying someone close to them has died from HIV/AIDS. Nearly half (47 percent) of those ages 35 and older say they have lost someone close to them to the disease, while just 8 percent of those ages 18-34 say the same. Older men are also somewhat more likely than younger men to say they know someone currently living with HIV (54 percent versus 39 percent). 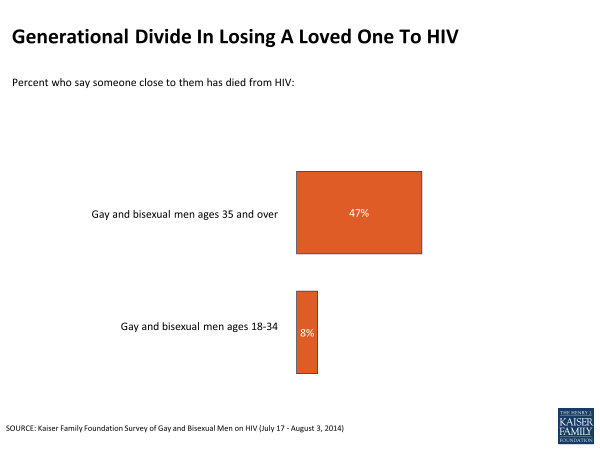