Section 2: Awareness And Opinions About HIV Prevention And Treatment

Gaps In Awareness About HIV Prevention And Treatment: PrEP, TasP, and When to Start

Most gay and bisexual men are not aware of current treatment recommendations for those who are HIV-positive, or of the latest developments in reducing new infections. Only about a quarter (26 percent) know about PrEP (pre-exposure prophylaxis), a recently approved prescription medication that people who are HIV-negative can take to lower their risk of becoming infected (this is somewhat higher than the general public, 14 percent). Three in ten (31 percent) believe no such medication exists, and over four in ten (43 percent) say they don’t know.

Gaps in awareness also exist when it comes to antiretroviral (ARV) treatment recommendations for those who are HIV-positive. Fewer than half (46 percent) of gay and bisexual men know that someone living with HIV should begin ARV treatment as soon as they are diagnosed, while 17 percent believe they should wait until their CD4 count falls below a certain level, and over a third (35 percent) say they don’t know the recommendation.1 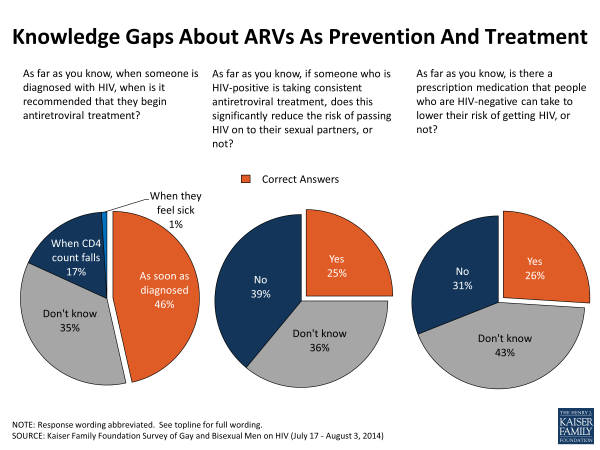 While most gay and bisexual men know that antiretroviral medications (ARVs) are effective at helping people with HIV live longer (82 percent) and improving the health of people with HIV (77 percent), far fewer realize that they’re also effective in preventing the spread of HIV to sexual partners (36 percent) (otherwise known as “treatment as prevention” or TasP).2

Further, only a quarter (25 percent) of gay and bisexual men know that if someone with HIV is taking consistent ARV treatment, it significantly reduces the risk of passing on HIV to their sexual partners (about the same as the general public, 21 percent). A plurality (39 percent) believe that consistent ARV treatment does not reduce the risk of transmission, and over a third (36 percent) say they don’t know enough to answer. 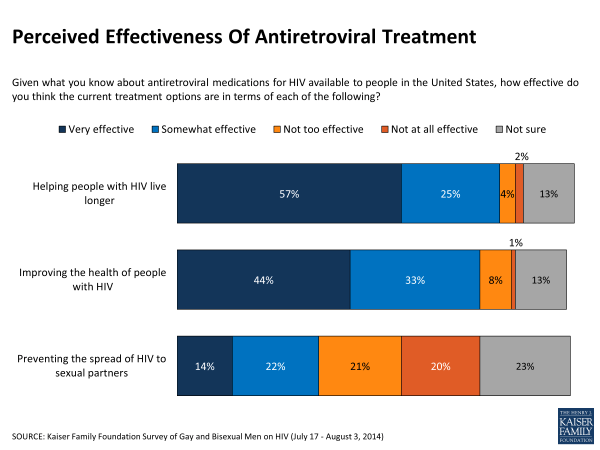 As noted above, just a quarter of gay and bisexual men know that a medication exists to reduce a person’s risk of contracting HIV. In a more specific question that mentions both the term pre-exposure prophylaxis (PrEP) and the brand name Truvada, just one in five say they have heard “a lot” (9 percent) or “a fair amount” (11 percent) about this new medication. One-quarter say they have heard “only a little” about PrEP, while over half (55 percent) say they’ve heard “nothing at all.” Just one in ten say they personally know someone who has taken PrEP for HIV prevention, including 5 percent who say they have taken the medication themselves.

When told of the existence of PrEP, just over half (56 percent) of gay and bisexual men say they agree with the view that the new medication “should be used as widely as possible among gay men because every available prevention tool should be used to limit the spread of HIV in communities at risk,” while about four in ten (43 percent) think it “should be used on a more limited basis among gay men because people using it may be less likely to use condoms consistently, putting them at risk for other sexually transmitted diseases.” 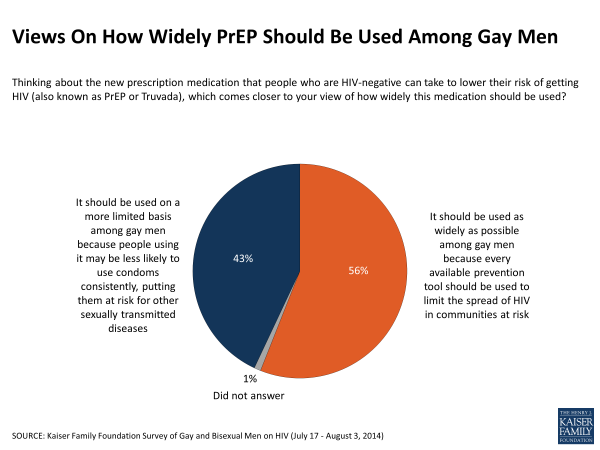 Section 1: Importance Of HIV/AIDS As An Issue, Personal Concern, And Personal Connections Section 3: Perceived Barriers, Stigma, And Talking About HIV