Firms not offering health benefits continue to cite cost as the most important reason they do not do so. Almost all firms that offer coverage offer benefits to dependents such as children and the spouses of eligible employees. 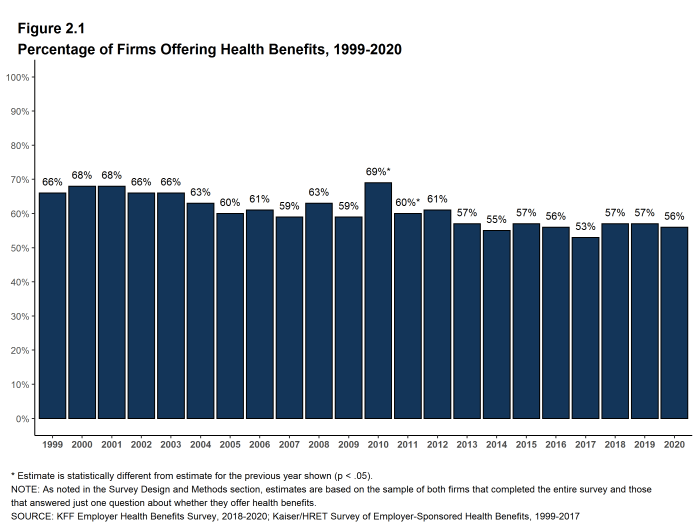 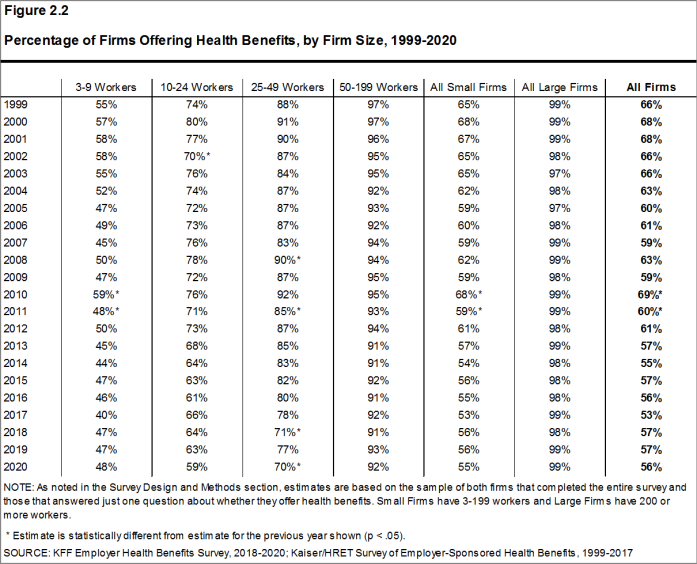 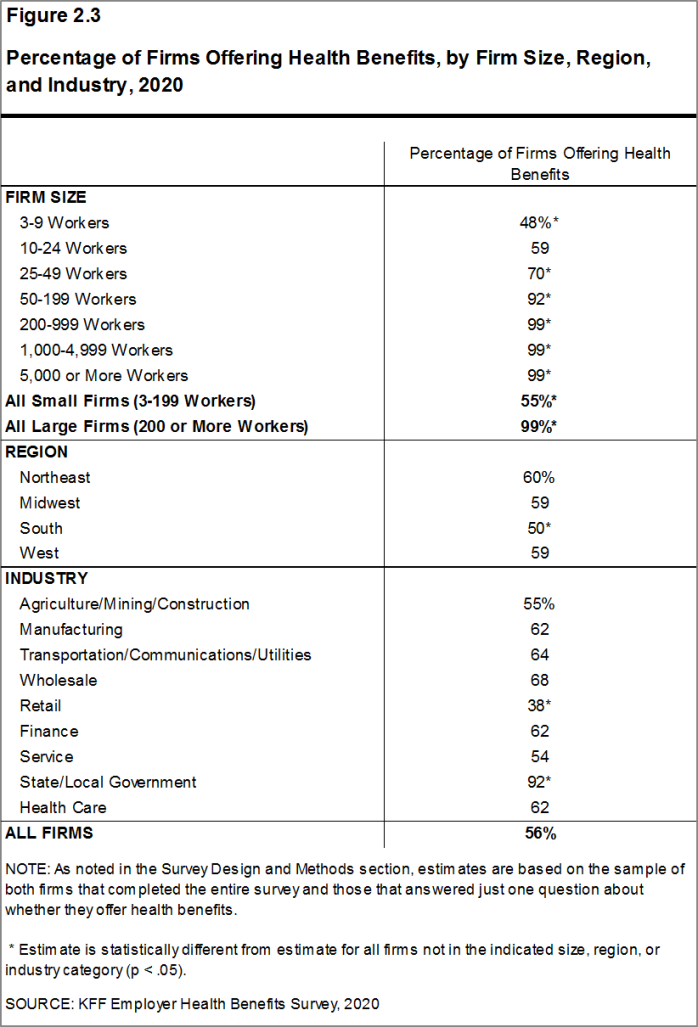 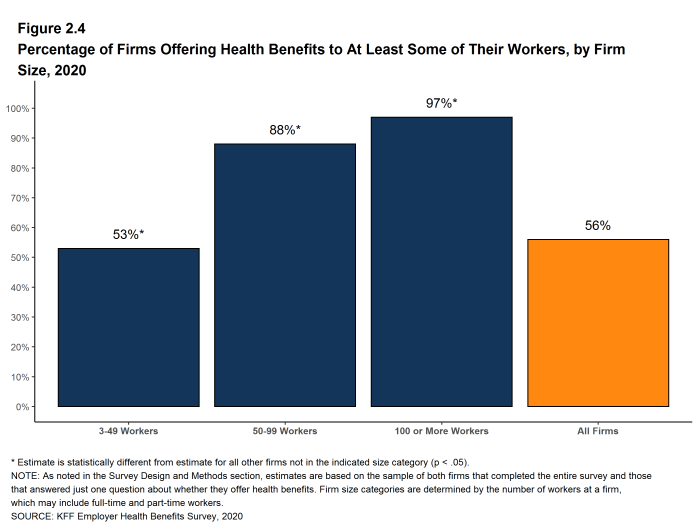 Figure 2.4: Percentage of Firms Offering Health Benefits to at Least Some of Their Workers, by Firm Size, 2020 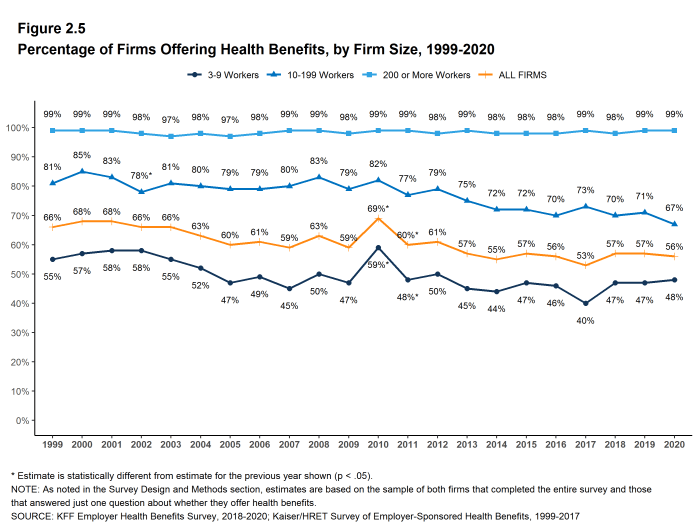 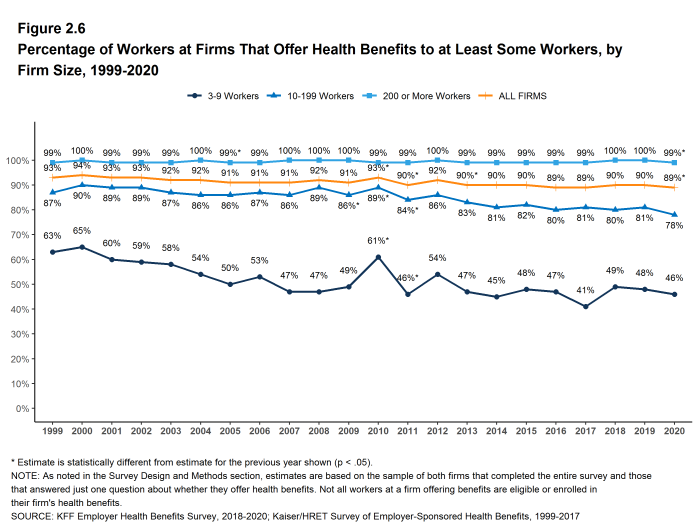 Figure 2.6: Percentage of Workers at Firms That Offer Health Benefits to at Least Some Workers, by Firm Size, 1999-2020

Beginning in 2015, we modified the survey to explicitly ask employers whether they offered benefits to employees working fewer than 30 hours. Our previous question did not include a definition of “part-time”. For this reason, historical data on part-time offer rates are shown, but we did not test whether the differences between 2014 and 2015 were significant. Many employers may work with multiple definitions of part-time; one for their compliance with legal requirements and another for internal policies and programs. 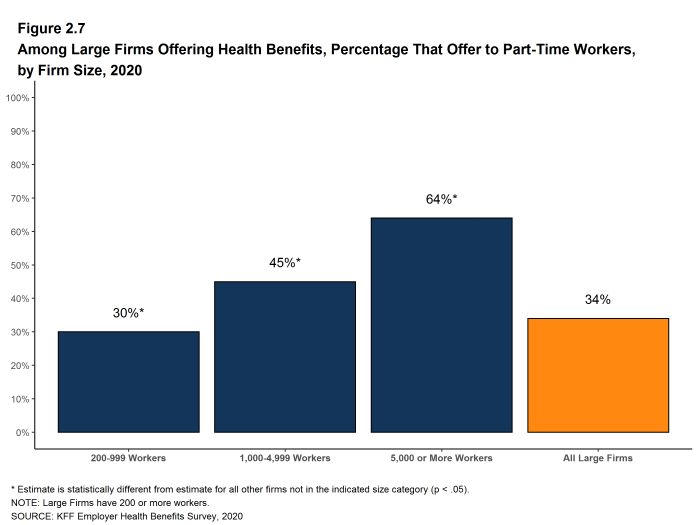 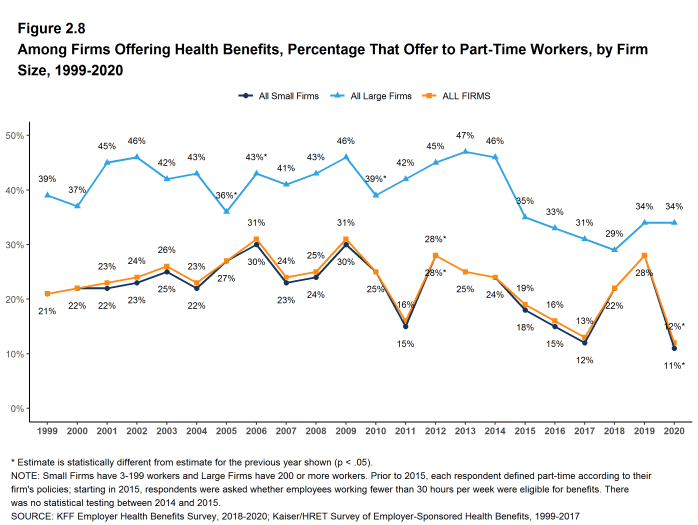 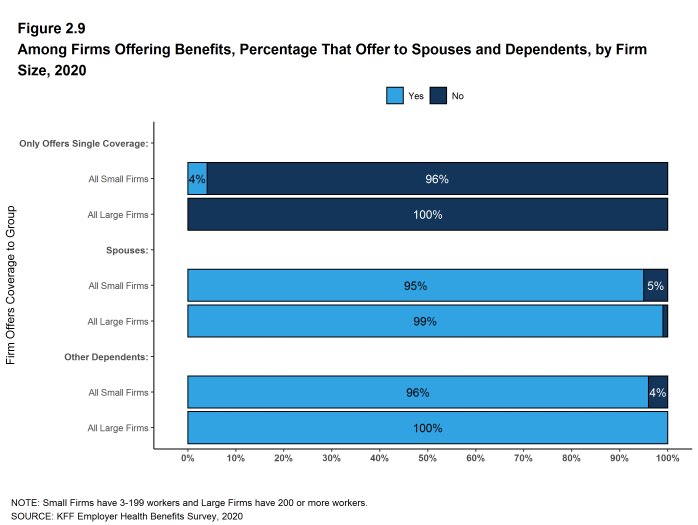 Figure 2.9: Among Firms Offering Benefits, Percentage That Offer to Spouses and Dependents, by Firm Size, 2020

Some employers place conditions on the ability of dependent spouses to enroll in a health plan if the spouse is offered health insurance from another source, such as his or her own place of work. 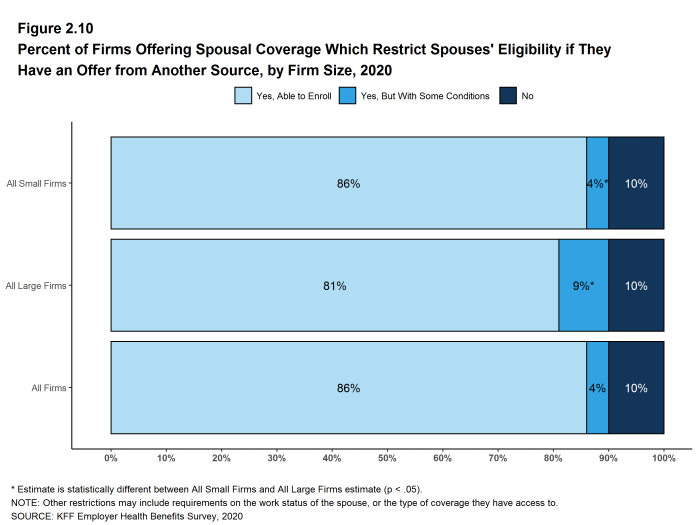 Figure 2.10: Percent of Firms Offering Spousal Coverage Which Restrict Spouses’ Eligibility If They Have an Offer From Another Source, by Firm Size, 2020 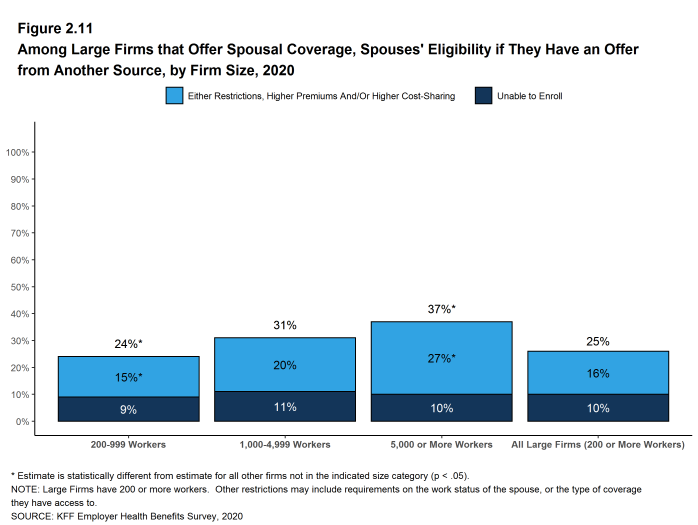 Figure 2.11: Among Large Firms That Offer Spousal Coverage, Spouses’ Eligibility If They Have an Offer From Another Source, by Firm Size, 2020 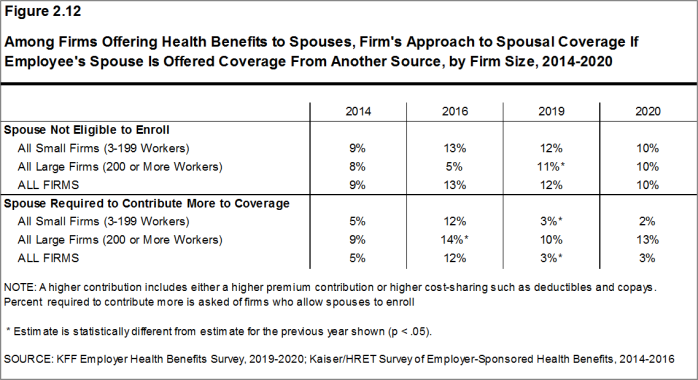 Figure 2.12: Among Firms Offering Health Benefits to Spouses, Firm’s Approach to Spousal Coverage If Employee’s Spouse Is Offered Coverage From Another Source, by Firm Size, 2014-2020

Figure 2.13: Among Small Firms Not Offering Health Benefits, Most Important Reason for Not Offering, 2020 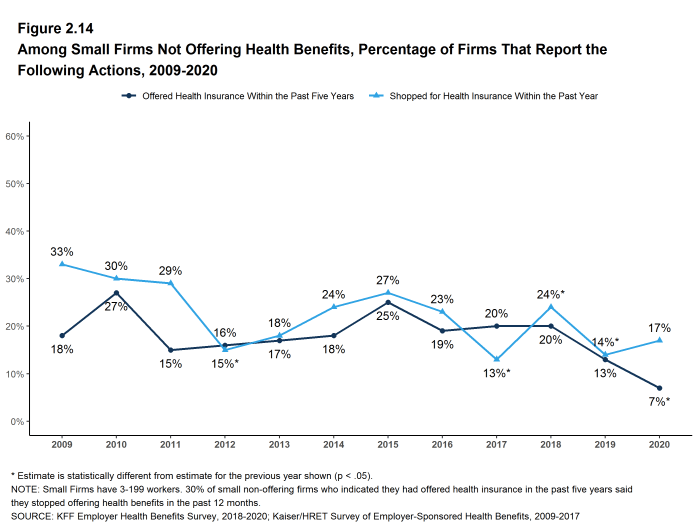 Figure 2.14: Among Small Firms Not Offering Health Benefits, Percentage of Firms That Report the Following Actions, 2009-2020 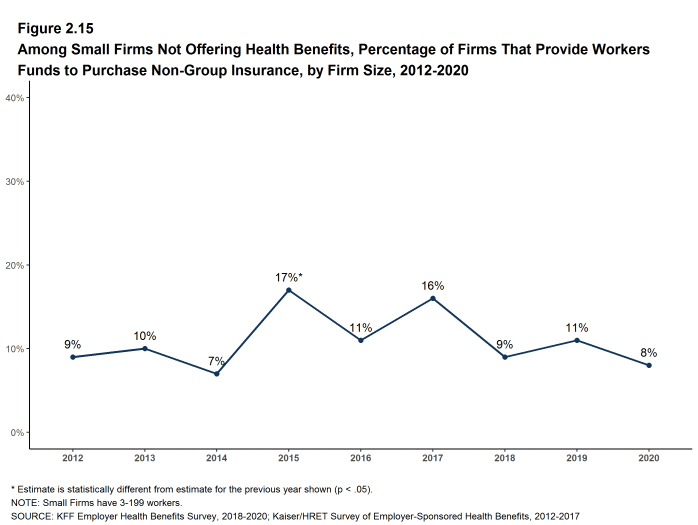 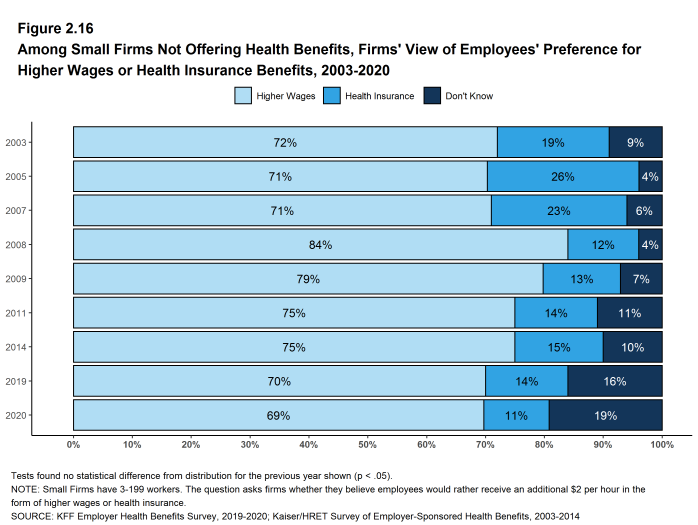