The social and economic upheavals resulting from the coronavirus pandemic have certainly impacted employers, workers and employee benefits. The EHBS was fielded between January and late July, which means that a portion of the interviews were conducted before the full impact of the pandemic became apparent, and other interviews were conducted as the implications unfolded; including during the period of significant job loss that occurred during and after March. Many of the metrics we look at, such as premiums, contributions, cost sharing and plan offerings, are determined before plan year begins, so it is likely that responses for those items were largely unaffected by the pandemic. Responses for other items, such as incentives for health screenings or inclusion of coverage for telehealth visits, may have changed during the course of the pandemic: employers for example, may have suspended certain incentives to accommodate employee reluctance to visit provider offices. As such we cannot determine how the pandemic has affected employer responses. Because of the timing of the survey, we were unable to include any direct questions about how employers reacted to the pandemic. 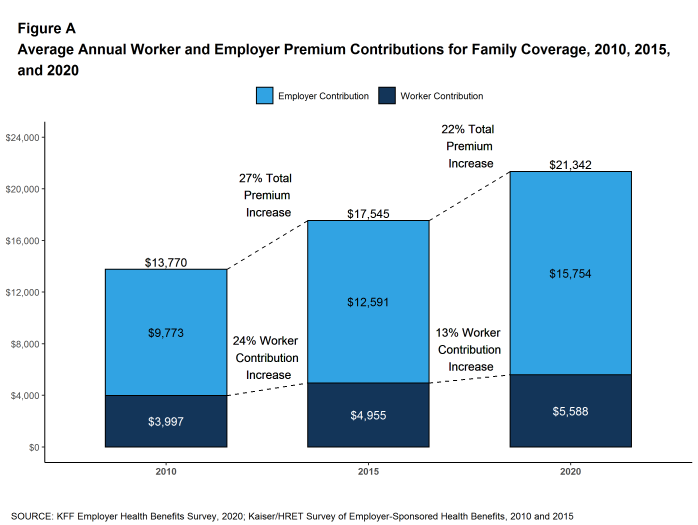 Figure A: Average Annual Worker and Employer Premium Contributions for Family Coverage, 2010, 2015, and 2020 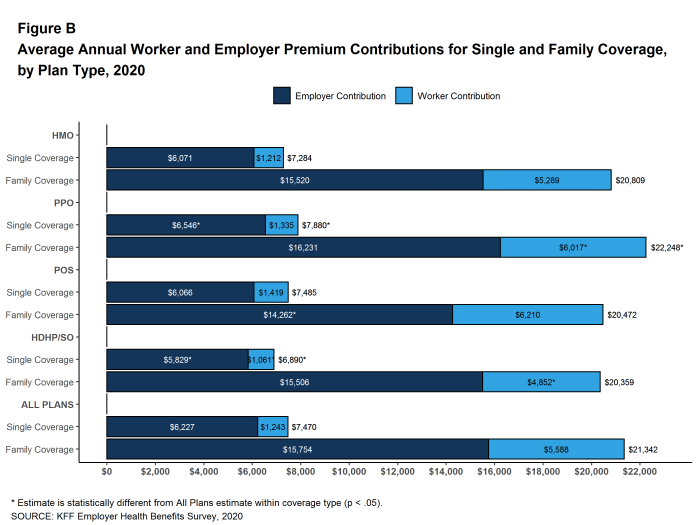 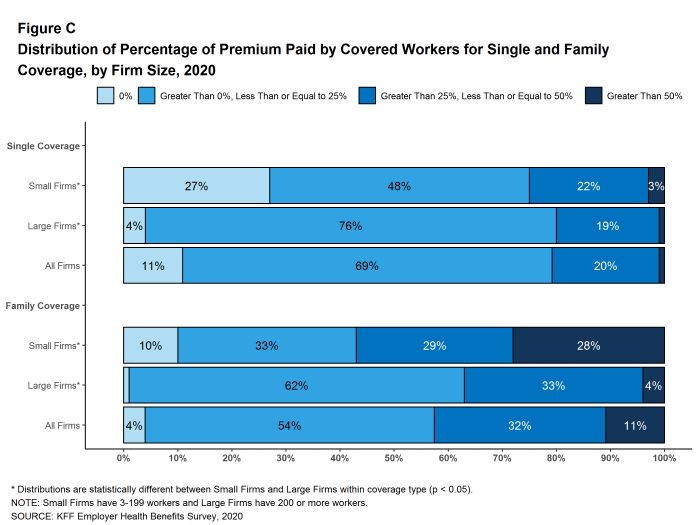 Figure C: Distribution of Percentage of Premium Paid by Covered Workers for Single and Family Coverage, by Firm Size, 2020 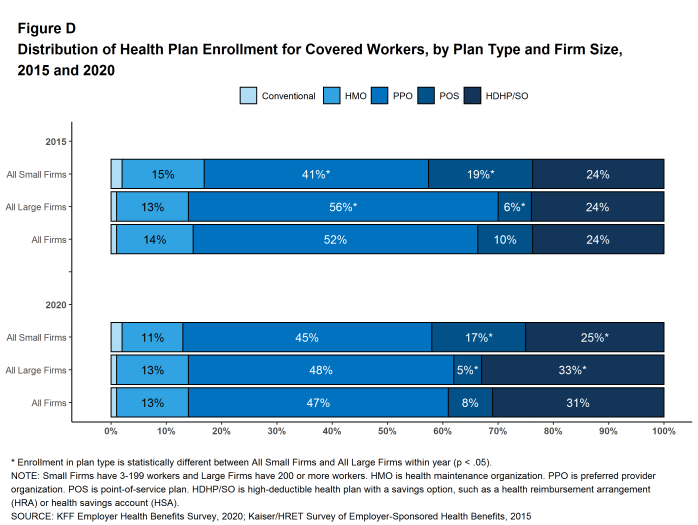 Thirteen percent of small firms report that they have a level-funded plan, similar to the percentage last year. These arrangements combine a relatively small self-funded component with stoploss insurance with low attachment points that may transfer a substantial share of the risk to insurers. These arrangements are complex and some small employers may not be entirely certain about the funding status of their plans. Among covered workers in small firms, 31% are in a plan that is either self-funded or told us that their plan was level-funded, higher than the percentage (24%) last year.

Most covered workers must pay a share of the cost when they use health care services. Eighty-three percent of covered workers have a general annual deductible for single coverage that must be met before most services are paid for by the plan. 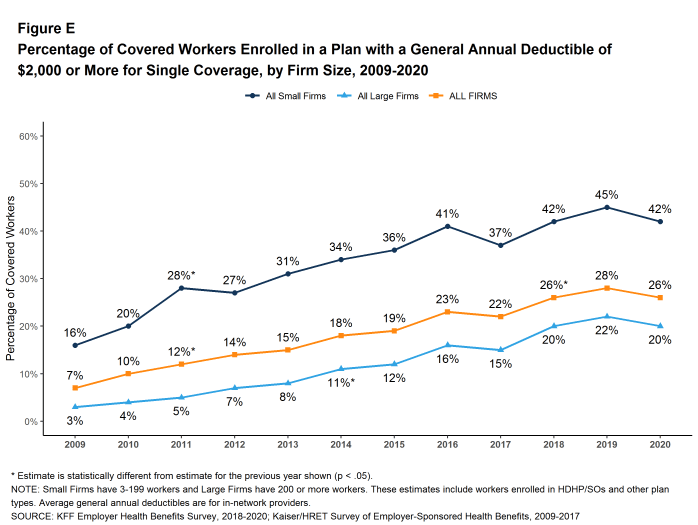 Figure E: Percentage of Covered Workers Enrolled in a Plan With a General Annual Deductible of $2,000 or More for Single Coverage, by Firm Size, 2009-2020

While the vast majority of firms are small, most workers work for large firms that offer coverage. In 2020, 89% of workers are employed by a firm that offers health benefits to at least some of its workers [Figure F].

Although the vast majority of workers are employed by firms that offer health benefits, many workers are not covered at their job. Some are not eligible to enroll (e.g., waiting periods or part-time or temporary work status) and others who are eligible choose not to enroll (e.g., they feel the coverage is too expensive or they are covered through another source). In firms that offer coverage, 82% of workers are eligible for the health benefits offered, and of those eligible, 78% take up the firm’s offer, resulting in 64% of workers in offering firms enrolling in coverage through their employer. All of these percentages are similar to 2019.

Looking at workers in both firms that offer and firms that do not offer health benefits, 57% of workers are covered by health plans offered by their employer, similar to the percentage last year. 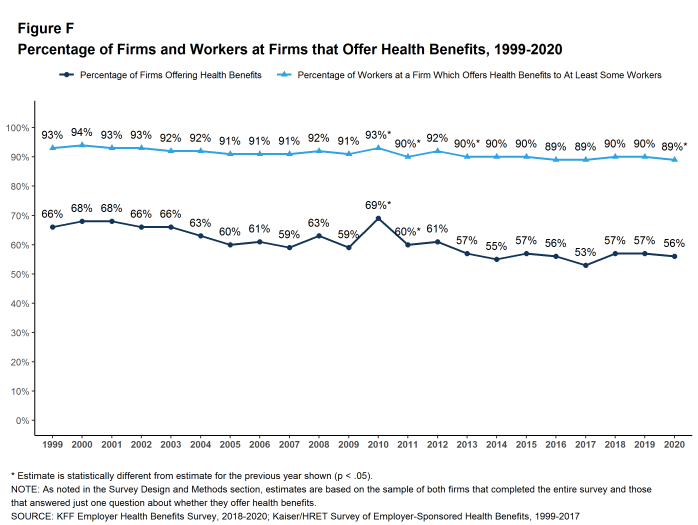 Figure F: Percentage of Firms and Workers at Firms That Offer Health Benefits, 1999-2020

Health and Wellness Promotion Programs. Most firms offering health benefits offer programs to help workers identify and address health risks and unhealthy behaviors. Fifty-three percent of small firms and 81% of large firms offer a program in at least one of these areas: smoking cessation, weight management, and behavioral or lifestyle coaching. Among large firms offering at least one of these programs, 44% offer workers an incentive to participate in or complete the program [Figure G].

Effectiveness of Programs. Firms may have a variety of objectives for offering health screening and health promotion programs, including improving the health and wellbeing of enrollees, reducing absences from work, and reducing costs. Firms generally responded that their programs were effective to some degree in meeting certain specified objectives, although there were many who responded that they did not know [Figure H]. 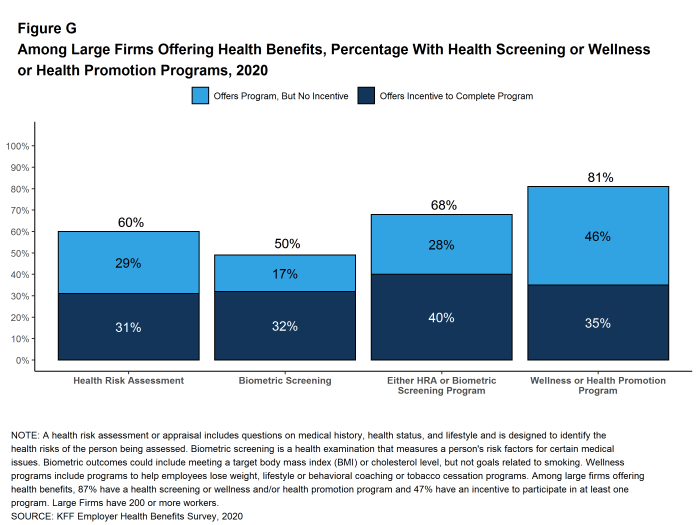 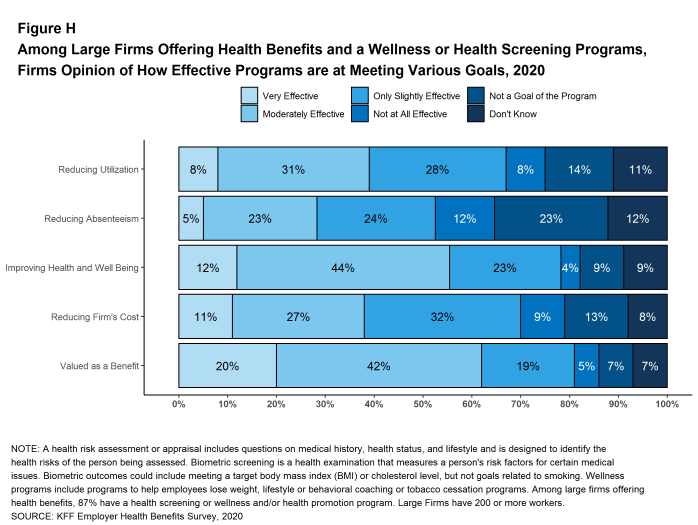 Figure H: Among Large Firms Offering Health Benefits and a Wellness or Health Screening Programs, Firms Opinion of How Effective Programs Are at Meeting Various Goals, 2020

Over the past year, there was a significant increase in the percentage of firms, particularly smaller firms (50-199 workers), reporting that they cover some services through telemedicine. While telemedicine has grown in recent years, it is possible that some of the growth this year reflects changes in response to the coronavirus pandemic as well as to an increased awareness. It will be important to watch if this heightened focus on access to care through telemedicine continues or abates as concerns about the coronavirus recede.

Firms and health plans can structure their networks of providers and their cost sharing to encourage enrollees to use providers who charge lower costs and/or who provide better care. This involves assuring that there are a sufficient number of providers to assure reasonable access while also limiting the network to those that deliver good quality and cost-effective care.

Only about one-in-five (22%) employers offering health benefits report being very satisfied with the availability of mental health providers in their provider networks. Among employers offering health benefits, 15% of employers with 1,000 to 4,999 employees and 23% of employers with 5,000 or more employees asked their insurer or third party administrator to increase access to in-network mental health and substance abuse providers. 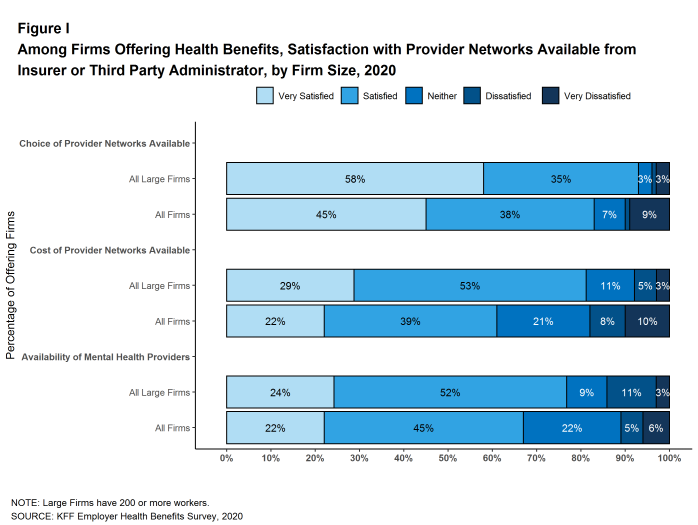 Among employers with 200 or more employees offering health benefits, 21% say that their health plan with the largest enrollment waives cost-sharing for some medications or supplies to encourage employees with chronic illnesses to follow their treatment. This likelihood increases with firm size.

Recent changes in federal rules expanded the number and types of items and services that may be considered preventive by HSA-qualified health plans, allowing plan sponsors to pay for part or all of these services before enrollees meet the plan deductibles. Among employers with 200 or more employees offering an HSA-qualified health plan, 29% say that they changed the services or products that individuals with chronic conditions could receive without first meeting their deductibles. Firms with 5,000 or more employees (48%) are more likely to say they changed the services or products available before the deductible is met.

Looking at the metrics we usually consider, such as premiums, contributions, cost sharing, offer and coverage rates, we would conclude that the marketplace for employer-based health coverage had another stable year in 2020. Premium increases were modest and consistent with recent years, contributions and cost sharing largely did not change, nor did the shares of workers offered coverage or covered at their jobs. There is a meaningful increase in the share of workers in self-funded plans, which will be important to understand if the higher level persists. We will include additional questions in the 2021 survey to explore why employers are taking this option.

Of course the economic and social changes caused by the coronavirus pandemic have dramatically changed the employment landscape across the nation. Unprecedented job loss combined with shelter-at-home requirements and continuing delays in reopening of workplaces and schools are challenging employers and workers in many ways, including health benefits. There are questions, for example, about the continued availability of coverage for furloughed workers, the share of laid-off workers who are electing COBRA continuation coverage, and changes being made to employee assistance programs and health benefit plans to support workers with the emotional, social and financial stresses. As noted above, however, because the survey was fielded as the pandemic unfolded, we are not yet in a position to address how employers responded to the pandemic. Most of the metrics discussed above are fixed at the beginning of the plan year and may not reflect current circumstances. Some other responses may have been affected by the unfolding of the pandemic.

While we observed a relatively modest change in premiums in 2020, this does not capture the pandemic’s turbulent impacts on health care costs this year. During the spring, employers and plans saw lower health care utilization and correspondingly lower spending. With enrollees skipping some care, insurers reported lower than predicted cost through the first half of the year. As stay-at-home orders have lifted, health care utilization has again started picking up. Spending in 2021 remains uncertain as employers and insurers continue to adapt to an evolving situation. We do not know how the reduced use of care earlier this year will affect future costs and premiums: in some cases the need for care will have passed but in others the care will just have been deferred. Missed preventive and diagnostic care may also lead to worsening health and higher costs in the future. Beyond any potential pent-up demand, employer-based plans may face higher costs due to new COVID-19 tests, treatments and vaccines. Conversely, we have witnessed a dramatic economic slowdown which may lead to reduced utilization, offsetting some cost on plans.

For a year that started with historically low levels of unemployment, 2020 saw a stark increase in the unemployment rate. A less competitive job market and the economic slowdown may reduce pressure on employers to offer competitive benefit packages in the coming year. We largely reported similar average cost-sharing amounts to 2019 but some employers may be considering reducing plan generosity depending on how the economic crisis unfolds.

The challenge for the 2021 survey will be to understand how employers are responding to the pandemic and accompanying economic fallout while still maintaining the core questions and purpose of the survey. We do not know how long the pandemic will last nor what the longer term economic consequences will be, but we can ask employers about how this uncertainty affected their benefit plan decisions, what types of benefits they added and/or changed, whether they saw changes in how employees used their benefits, and whether they expect any changes to be more permanent. We also expect to ask how the disruption and uncertainty caused by the pandemic affected employer decisions about changing their plans or shopping for new vendors. The pandemic has already affected many employer benefits, and will continue to shape their decision-making as they anticipate new workplace accommodations, changes in premiums and the direct cost of the pandemic.

The Kaiser Family Foundation 2020 Employer Health Benefits Survey reports findings from a telephone survey of 1,765 randomly selected non-federal public and private employers with three or more workers. Researchers at NORC at the University of Chicago and the Kaiser Family Foundation designed and analyzed the survey. Davis Research, LLC conducted the fieldwork between January and July 2020. In 2020, the overall response rate is 22%, which includes firms that offer and do not offer health benefits. Among firms participating in the past two years, the survey’s response rate is 51%. Unless otherwise noted, differences referred to in the text and figures use the 0.05 confidence level as the threshold for significance. Small firms have 3-199 workers. Values below 3% are not shown on graphical figures to improve the readability of those graphs. Some distributions may not sum due to rounding. For the first time since 1999, we contracted with a new data collection firm to conduct the survey. For more information on potential ‘house effects’ resulting from this change, as well as information on changes to our weighting methodology and measurements of workers’ wage and inflation see the Survey Design and Methods section.