Two states (Maine and Virginia) implemented the ACA Medicaid expansion in FY 2019, bringing the total number of states that have implemented the ACA Medicaid expansion as of July 2019 to 34 (Figure 1). Expansion was implemented in Virginia and Maine in January 2019. Maine adopted the Medicaid expansion through a November 2017 ballot initiative. Due to delays by the former governor, however, implementation did not occur until the new governor signed an executive order in January 2019 directing the Department of Health and Human Services to begin expansion implementation and provide coverage to those eligible retroactive to July 2018. CMS approved the state’s plan retroactive to July 2, 2018. 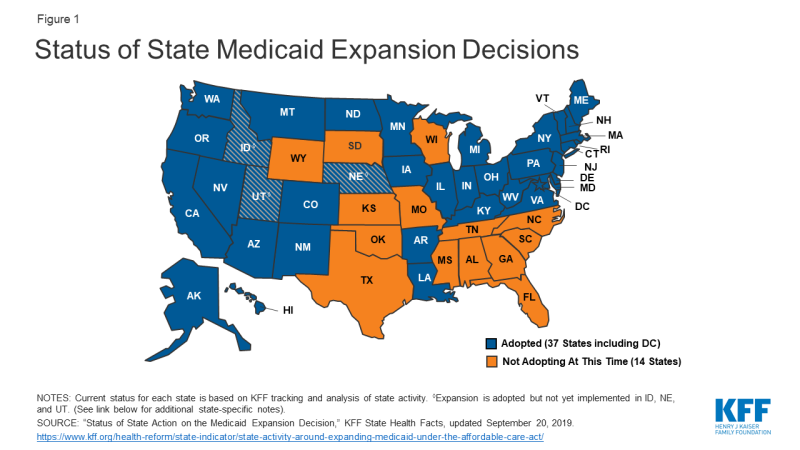 Three states (Idaho, Nebraska and Utah) newly adopted the expansion through 2018 ballot initiatives, but implementation of the full expansion has been delayed in all three states. 1

In May 2019, the Montana governor signed legislation to continue the state’s Medicaid expansion program with significant changes until 2025. This action came after Montana residents voted down a measure on the November 2018 ballot that would have extended the Medicaid expansion beyond the June 30, 2019 sunset date and raised taxes on tobacco products to finance the expansion. Current legislation directs the state to seek federal waiver authority to make several changes to the existing expansion program, including adding a work requirement as a condition of eligibility and increasing the premiums required by many beneficiaries.

In a number of states, Medicaid expansion was still under debate for FY 2020 and beyond. In North Carolina, the governor vetoed the budget passed in late June 2019 primarily because it did not expand Medicaid. The budget stalemate continues as of October 2019. In September 2019, advocates in Missouri launched a campaign to put Medicaid expansion on the ballot in November 2020. To qualify for the ballot initiative, they must obtain at least 172,000 signatures. After legislation failed to pass last session in Kansas, in September 2019, the governor signed an executive order establishing a committee to study the Medicaid expansion experience in other states and to outline these findings for consideration during the 2020 legislative session.

Although not cited as eligibility standards changes, several states (not included in the counts below) noted a downward pressure on enrollment in FY 2019 or FY 2020 related to increased eligibility verifications, data matching, and other process-related issues.

The most frequently reported eligibility restrictions implemented in FY 2019 or planned for FY 2020 are work or community engagement requirements. Work requirement waivers generally require beneficiaries to verify their participation in certain activities, such as employment, job search, or job training programs, for a certain number of hours per week or verify an exemption to receive or retain Medicaid coverage. Details about the specific number of hours, approved activities, exemptions, reporting process, and populations included (e.g., expansion adults and/or low-income parents) vary across states. Data show, however, that most Medicaid enrollees are already working or would qualify for exemptions from these requirements, yet many of these individuals would still need to navigate a reporting or exemption process to retain their Medicaid coverage.8,9,10 In this report, work requirement policies are counted based on the initial date of implementation rather than the date on which the first coverage terminations will occur.

As a result of litigation challenging work requirements, three states (Arkansas, Kentucky and New Hampshire) have had work requirement waivers set aside by the courts. On March 28, 2019, the DC federal district court set aside the HHS Secretary’s approval of Medicaid waivers with work and reporting requirements and other eligibility and enrollment restrictions in Kentucky and Arkansas.13 This was the second time the court ruled on Kentucky’s waiver, after finding that the Secretary’s initial approval was similarly flawed, and the first time the court considered Arkansas’s waiver. The court vacated both waivers – stopping work and reporting requirements as well as other waiver provisions. While Kentucky had not begun implementation, Arkansas’s waiver implementation began in June 2018 and resulted in over 18,000 people losing coverage.14 An appeal currently is underway in the DC Circuit.

On July 29, 2019, the DC federal district court set aside New Hampshire’s work requirement waiver. Implementation was stopped unless and until HHS issues a new approval that passes legal muster or prevails on appeal.15 Although the state began implementation in June 2019, no enrollees had lost coverage yet.

Other examples of reported eligibility restrictions in FY 2019 or FY 2020 include:

Medicaid is a key source of financing of births for low- and modest-income families. Women who would not otherwise be eligible can qualify for Medicaid coverage for pregnancy, delivery, and postpartum care due to higher income eligibility thresholds for pregnant women.17 Medicaid directors were asked to provide the most recent available data on the share of all births in their states that were financed by Medicaid. About three-quarters of the 50 reporting states were able to provide data for calendar year or fiscal year 2017 or 2018. The rest of the states provided data from 2013-2016 or 2019. The median share of births financed by Medicaid in the 50 reporting states was 46%. Six states (Arkansas, Louisiana,18 Mississippi, Nevada, New Mexico, and South Carolina) reported that Medicaid pays for 60% or more of all births in their state, while four states reported that Medicaid finances less than 30% of all births (New Hampshire, North Dakota, Utah, and Vermont).

The Medicaid statute generally does not allow states to charge premiums to most Medicaid beneficiaries. Historically, premiums were limited to special higher income categories of beneficiaries such as expanded Medicaid for working people with disabilities. However, some states have obtained waiver authority to charge higher premiums and/or copayments than otherwise allowed, especially for the Medicaid expansion population.

Four states (Iowa, Indiana, Maine, and Wisconsin) reported implementation of new premium programs or changes to existing premiums in FY 2019. In FY 2019, Indiana implemented a tobacco premium surcharge for expansion adults and low-income parent/caretakers, increasing premiums by 50% for tobacco users beginning in their second year of enrollment, as part of its Healthy Indiana Plan (“HIP”) waiver. Maine implemented premium increases in its long-standing Section 1115 waiver serving persons with HIV/AIDS. Those subject to premium amounts will see premiums increase 5% annually over the ten-year demonstration period. Effective July 1, 2018, Iowa added a new $3 per month premium for Dental Wellness Program (DWP) members that do not complete healthy behaviors. Effective January 1, 2019, Wisconsin ended premiums for parents and caretaker relatives receiving Medicaid under the Transitional Medical Assistance component of the program. New Mexico had obtained approval under a Section 1115 waiver to implement premiums for expansion adults above 100% FPL starting in 2019; however, the state, under a new governor, is amending the waiver to remove this authority and does not intend to implement premiums.

Four states (Idaho, Montana, Virginia, and Wisconsin) reported planned implementation of new premium programs or changes to existing premiums in FY 2020. Montana and Virginia have implemented or plan to implement new premiums or premium changes for Medicaid expansion adults. Montana’s pending waiver request proposes to gradually increase premiums for each year a member is enrolled in the expansion (from 2% of income for the first two years up to 4% at the rate of 0.5% per year) for expansion adults 50-138% FPL. Virginia’s pending waiver request would add premiums for expansion adults above 100% FPL. In FY 2020, Wisconsin plans to implement premiums for childless adults which will vary based on completion of a health risk assessment and healthy behaviors. Finally, Idaho is planning to implement premiums for children in its Serious Emotional Disturbance (SED) Youth Empowerment Services (“YES”) Section 1915(i) program in FY 2020.

The Medicaid expansion provided a new coverage option for many individuals involved with the criminal justice system, especially childless adults who were not previously eligible in most states. While Medicaid cannot pay for services other than inpatient hospitalization during incarceration, most states are seeking ways to promptly provide coverage and health care services to individuals upon release. Maintenance of medications and access to behavioral health services can be important factors in mitigating recidivism rates.19

States were also asked if Medicaid eligibility agencies have an electronic, automated data exchange process with jails and/or prisons to facilitate suspension and reinstatement of eligibility for individuals moving into and out of incarceration. About half of states (23 states) indicated such processes were in place in FY 2019. Nine additional states indicated plans to implement an electronic, automated data exchange process in FY 2020. Seventeen states indicated there are no current plans to implement such a process.20