Medicaid is the nation’s primary payer for long-term services and supports (LTSS), covering a continuum of services ranging from home and community-based services (HCBS) that allow people to live independently in their own homes or in other community settings to institutional care provided in nursing facilities (NFs) and intermediate care facilities for individuals with intellectual disabilities (ICF-IDs). States have increasingly sought to expand home and community-based options and decrease reliance on institutional care in an effort to support beneficiaries’ preference to remain in their homes and community and rebalance their LTSS systems. In federal fiscal year 2016, spending on Medicaid LTSS totaled $167 billion, and HCBS represented 57% of these expenditures. In recent years, growth in Medicaid LTSS expenditures has been largely concentrated in HCBS.1

This year’s survey shows that nearly all states in FY 2019 (48 states) and FY 2020 (47 states) are using one or more strategies to expand the number of people served in home and community-based settings (Figure 8 and Table 10). States were asked about their use of the following rebalancing tools/methods: HCBS waivers and/or State Plan Amendments (SPAs) (including 1915(c), Section 1115, 1915(i), and 1915(k)); rebalancing incentives in managed care contracts; Programs of All-Inclusive Care for the Elderly (PACE); and efforts to downsize state institutions. 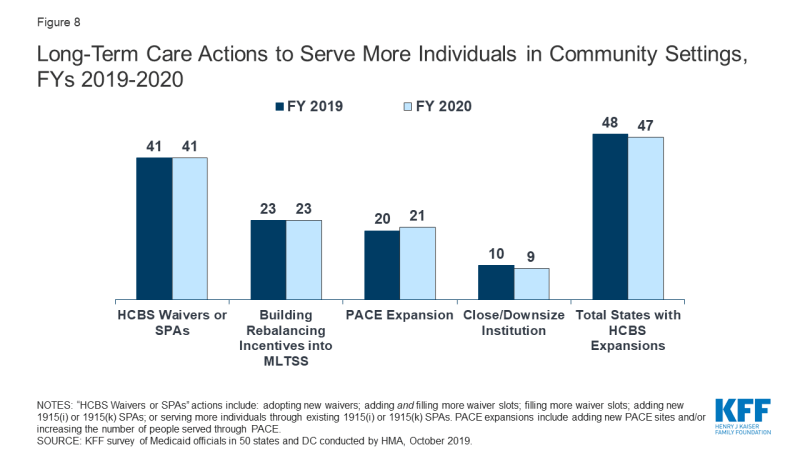 A large majority of states in FY 2019 (41 states) and in FY 2020 (41states) reported adopting new HCBS waivers/SPAs and/or serving more individuals through existing HCBS waivers/SPAs. Twenty-three states, or nearly all states that use an MLTSS model for at least some populations, reported using rebalancing incentives in their MLTSS contracts.2 For example, a number of states reported setting a blended nursing facility/HCBS rate for their long-term care population with assumptions built into the rates to incentivize plans to provide more home and community-based services. Nearly half of states (25 states) reported implementing PACE expansions in FY 2019 or FY 2020 by opening new PACE sites in one or both years (17 states) and/or expansion at existing sites. Fewer states reported efforts to downsize state institutions (likely because many states already have taken these actions in past years). No states took action to reduce or restrict the number of people receiving Medicaid HCBS in FY 2019 or FY 2020.

Many states are struggling to find sufficient numbers of trained direct care workers to meet the demand for services, including the demand for care in home and community-based settings.3,4 Low wages, few benefits, limited opportunities for career advancement, inadequate training, and high rates of worker injury are factors that contribute to a workforce shortage and high workforce turnover among paid LTSS direct care workers. The National Center for Health Workforce Analysis projects that demand for direct care workers (including nursing assistants, home health aides, personal care aides, and psychiatric assistants/aides) could grow by 48% between 2015 and 2030. Driven by demographic shifts, increased longevity, and increased prevalence of disability, this increased demand is expected to far exceed the available LTSS workforce supply.5

Thirty-seven states reported offering at least some housing-related services in FY 2019 and/or FY 2020 under SPA, Section 1915 (c), or Section 1115 to promote community integration for individuals with disabilities, seniors in need of LTSS, individuals experiencing homelessness, or individuals with SMI/SUD (Exhibit 17). The availability of affordable, accessible housing has long been identified as a major barrier to state efforts to transition individuals from institutions and rebalance their LTSS systems.6 In 2015, CMS issued an Informational Bulletin to clarify how Medicaid can be used to support certain housing-related activities and promote community integration for targeted groups (individuals with disabilities, seniors in need of LTSS, and individuals experiencing chronic homelessness).7 While noting Medicaid funds generally cannot be used for room and board, the bulletin identified several categories of services that can be funded including: individual housing transition services, individual housing and tenancy sustaining services, and state-level housing related collaborative activities.8 A majority of the housing-related services described by states are offered through Section 1915 (c) waivers followed by housing services offered through Section 1115 waivers. Fewer states provide these services under their State Plan.

The following are examples of states implementing new or expanded housing supports in FY 2020:

Money Follows the Person (MFP) is a federal grant program enacted under the Deficit Reduction Act of 2005 and extended through September 2016 by the Affordable Care Act, which operates in 44 states.10 Enhanced federal funding under MFP has supported the transition of over 90,000 individuals from institutional to home and community-based long-term care settings as of June 2018.11 This includes the transition of older adults, individuals with physical disabilities, individuals with mental illness, and individuals with I/DD. The program has also been a catalyst for development of housing-related activities as states have used these resources to offer new housing-related services and incorporate housing expertise within their Medicaid programs, among other activities to assist in expanding housing options available for individuals who choose HCBS.12,13

Although states were set to fully phase-out their MFP programs in federal fiscal year 2020, the Congress acted to provide $254 million in additional funds for a short-term extension of the program (authorized additional funding currently expires December 31, 2019).14 However, without a longer-term reauthorization, the future of the MFP program remains uncertain. In this year’s survey, states were asked about the status of their MFP funding and the services that would be impacted if MFP funds were exhausted and the program is not reauthorized. Thirty-six states reported they have not yet exhausted their MFP funds and most states expect their funding to last through federal fiscal year 2020. In contrast, seven states report having expended all of their MFP dollars.15 In anticipation of the phase-out of MFP, several states indicated they had been able to transition certain MFP services to their State Plan and/or 1915(c) waivers. A greater number of states identified a range of services and key administration activities they would expect to discontinue if/when MFP funding expires. These include certain community transition services; community case management; outreach specialists, housing specialists, and housing relocation assistance; training for family caregivers, care coordinators, and providers; among other activities. Of these, community transition services were most often cited as being at risk once MFP funds are exhausted.

Of the 25 states that reported using one or more of these capitated MLTSS models, eight states reported using two models, and one state (New York) reported using all three. Of the states with capitated MLTSS, 18 states offered some form of MLTSS plan on a statewide basis for at least some LTSS populations as of July 1, 2019 (Table 11). Almost every MLTSS state includes both institutional and HCBS in the same contractual arrangement with a few exceptions: Ohio and Michigan report that coverage varies by MLTSS arrangement and Arkansas’ new PASSE program includes only HCBS.

In addition to these capitated models, two states (Alabama and Washington) report managed fee-for-service (FFS) LTSS models. Under these arrangements, states make payments to care coordination entities responsible for managing the care of individuals, while continuing to reimburse providers on a FFS basis for LTSS and other Medicaid services. Washington is the only state that has a managed FFS Financial Alignment Initiative in place (discussed in more detail below). In FY 2019, Alabama began contracting with a provider-led Integrated Care Network (ICN) to provide enhanced case management, education, and outreach services to most Medicaid long-term care recipients in both HCBS and institutional settings. The ICN is paid a per-member per-month (PMPM) payment with a portion of that payment contingent on the entity meeting state-established targets for nursing facility and HCBS mix.

As of July 1, 2019, nine states offered an MCO-based FAI (California, Illinois, Massachusetts, Michigan, New York, Ohio, Rhode Island, South Carolina, and Texas). These initiatives aim to provide more integrated care across Medicare and Medicaid, including LTSS, to dual eligible enrollees. The FAI model involves a three-way contract between an MCO, Medicare, and the state Medicaid program.16,17 In April 2019, CMS issued a state Medicaid director’s letter to encourage additional states to participate in an FAI demonstration model.18 Citing a lack of coordinated care for dual eligibles and a disproportionate share of Medicare and Medicaid spending for these beneficiaries, the letter outlined three opportunities for states to consider to test new models for dually eligible individuals – a capitated financial alignment model; a managed FFS model; and an alternative state-designed model. For states currently participating, the letter offered opportunities for multi-year extensions as well as possible revisions to existing FAIs; for example, expansion of the geographic scope of the demonstrations.19

States were asked whether they plan to take advantage of these new opportunities. Of the nine states currently participating in the capitated FAI model, five indicated that they planned to seek an extension and four indicated that a final determination on whether to pursue this opportunity had not been made. Washington also reported an intent to seek an extension to their current managed FFS FAI demonstration. For states without an FAI, only Tennessee affirmatively indicated plans to pursue a state-designed model.

Many states encourage improved coordination and integration of services for the dually eligible population under MCO arrangements outside of the FAI. Under a Memorandum of Understanding (MOU) with CMS, Minnesota operates an administrative alignment demonstration (with no financial alignment) to test ways to streamline processes and better integrate care for dually eligible beneficiaries enrolled in the Minnesota Senior Health Options program. Increasingly, states are also utilizing the existing Medicare Dual Eligible Special Needs Plans (D-SNP) infrastructure as a platform to improve integration and coordination for individuals also enrolled in Medicaid managed care. Overall, 36 states indicated in this year’s survey having a contract with their D-SNPs to support better care coordination for dual eligible beneficiaries. Eleven states22 report that they require Medicaid-contracting MCOs to be Medicare Dual Eligible Special Needs Plans (D-SNPs)23 or Fully Integrated Dual Eligible (FIDE) Special Needs Plans24 in some or all MLTSS models offered in the state. Seven states report that they have or are planning to institute “default enrollment.” Under default enrollment, beneficiaries in a capitated Medicaid managed care plan may be automatically enrolled in an affiliated D-SNP plan when an individual becomes eligible for Medicare. Going forward, states are expected to continue to increase their reliance on D-SNPs as part of their MLTSS approach given recent CMS guidance promoting opportunities to use D-SNPs and new requirements enacted as part of the Balanced Budget Act of 2018 (effective in Calendar Year 2021) for D-SNPs to better integrate care for dual eligibles.25

Table 10: Long-Term Care Actions to Serve More Individuals in Community Settings in all 50 States and DC, FY 2019 and FY 2020