Based in the Executive Branch, MCC is an independent U.S. foreign assistance agency, specifically a U.S. government corporation established in January 2004 by the Millennium Challenge Act of 2003.1,2 Its purpose is to reduce poverty by promoting economic growth in low- and lower-middle-income countries through the development of country assistance agreements, which are meant to be driven by country-identified priorities for U.S. government support.3

MCC’s approach is considered unique among U.S. development agencies for several reasons, including its use of quantitative benchmarks to determine eligibility, a heavy emphasis on country-led planning and implementation of assistance agreements, and a reliance on robust and transparent monitoring and evaluation of progress and impact of its assistance.4 The agency has also been seen as early champion of gender dimensions of development, having adopted its first gender policy in 2006 and long recognizing gender inequality as “a significant constraint” to achieving its mission.5,6

MCC is led by a chief executive officer (CEO) – a Presidential appointee requiring Senate confirmation – and overseen by a Board of Directors consisting of five members from the U.S. government and four members from the private sector. U.S. government members include: the Secretary of State, the Secretary of the Treasury, the U.S. Trade Representative, the Administrator of the U.S. Agency for International Development (USAID), and the CEO of MCC.

Private sector members are nominated by the President and confirmed by the U.S. Senate.7

The MCC Board carries out a multi-tiered country selection process, by first identifying candidate countries and then assessing their eligibility to apply for assistance.8 Candidate countries are identified based on per capita income. Only low- and lower-middle-income countries, according to World Bank income classifications, are considered candidates. Eligible countries are selected from these candidates based on their demonstrated commitment to policies related to MCC’s three key areas:

To determine eligibility and gauge country commitment to key principles, MCC relies on more than 20 quantitative indicators of policy and performance. Three of these eligibility indicators are health-focused:

How a country performs against all indicators (known as a “country scorecard”) helps determine whether they are eligible for MCC assistance. The MCC Board can also consider two other factors in its decision: the opportunity to reduce poverty and generate economic growth within a country, and the availability of MCC funds.10

Since its creation in 2004, MCC has supported development programs in 43 low- and lower-middle-income countries.11 MCC assistance is provided through two types of agreements: compacts and thresholds.12

Compacts are larger agreements that can span multiple sectors and which typically last five years. To be eligible for compact funding, a candidate country must score above the median compared to other countries in its income group (e.g., other low-income countries) with regard to at least 10 of the eligibility indicators, including two required indicators:

Through August 2019, MCC has signed 36 compacts with 29 countries (some countries have signed a second compact after the first ended), for amounts ranging from $66 million to $698 million.13 A legislative change enacted in April 2018 allows MCC to now pursue agreements with regional investments (i.e., with neighboring countries) in addition to its standard bilateral agreements; to date, no regional investments have been approved.14

Thresholds are smaller, targeted, shorter-term grants designed to help countries become compact-eligible. A candidate country not meeting the criteria for a compact but demonstrating commitment to improving its performance may be eligible for threshold funding. MCC has signed 29 threshold agreements with 27 countries (some countries signed a second threshold agreements after the first ended), for amounts ranging from $6.7 million to $55 million.15 Nine countries have successfully moved from receiving threshold funding to subsequently signing a compact.16

First funded by Congress at $994 million in FY 2004, MCC appropriations reached a peak of $1.75 billion in FY 2006 and FY 2007. Since then, appropriated funding for MCC fluctuated somewhat, though in recent years remained steady at around $900 million a year (see Figure 1). As in the prior two years, the current Administration has proposed reduced funding for MCC in FY 2020). Congress has thus far rejected proposed spending cuts.17 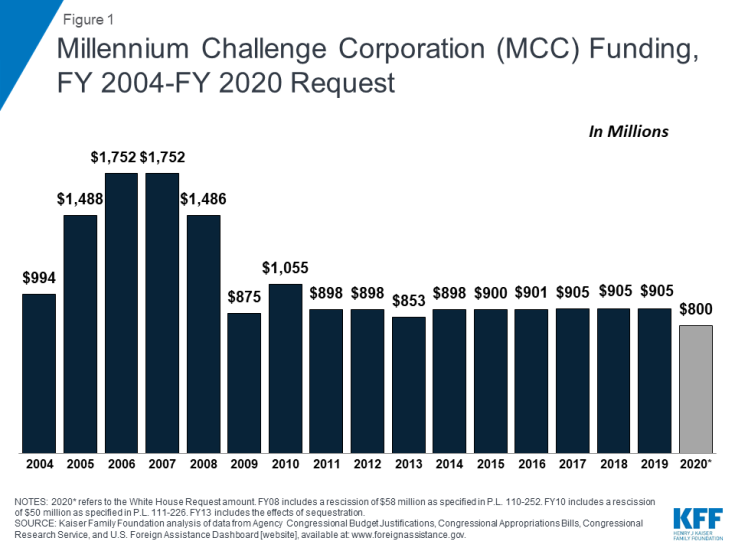 The MCC portfolio of projects spans many sectors of development, including health. MCC recognizes health as important to its poverty reduction mission and has supported a number of health projects in a range of countries.19 These have included support in areas such as HIV/AIDS, family planning and reproductive health, nutrition, and other public health efforts, as well as water and sanitation. Together, health and/or water and sanitation has been included in 12 compacts and five threshold agreements, spanning 16 countries. All but one of these compacts and threshold agreements have been completed (the threshold program in Sierra Leone remains active). From FY 2004 through FY 2018, MCC committed almost $1.5 billion to 17 different projects focused on health and/or water and sanitation (under compacts and thresholds), an amount which equaled almost 11% of total committed MCC funding. Around $310 million of this has been for health-specific projects, while $1.182 billion has been for water and sanitation.20 See Table 2. 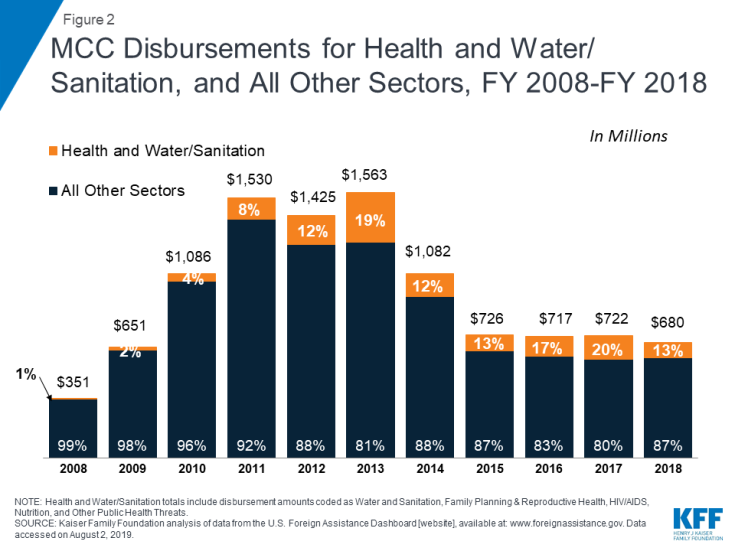 Figure 2: MCC Disbursements for Health and Water/ Sanitation, and All Other Sectors, FY 2008-FY 2018

Health projects (other than water and sanitation) have been included in four compacts and four threshold agreements with seven countries. Funding for these projects made up varying proportions of each agreement’s total funding, ranging from 0.4% of Namibia’s compact funding to 36% of Indonesia’s threshold funding (see Table 2).22 Some examples of health projects supported by MCC are:

Coordination with Other U.S. Efforts

MCC has made efforts to coordinate with other U.S. foreign assistance agencies on health. For instance, through its compact with Lesotho focused on HIV/AIDS and other health issues, MCC coordinated with President’s Emergency Plan for AIDS Relief (PEPFAR, the U.S. government’s response to global HIV/AIDS) programs in-country.24 MCC and PEPFAR also jointly created a Data Collaboratives for Local Impact initiative in 2015 to help build the capacity communities to generate and use data effectively.25 MCC has at times served as a resource for other agencies seeking to learn from its approach. For example, MCC has partnered with the State Department’s Office of the Global AIDS Coordinator (OGAC), which administers PEPFAR, to promote mutual learning on country ownership and sustainability of foreign assistance.26

MCC, once considered a novel approach to U.S. foreign assistance, is now established and well into its second decade of operation. Sustainability of funding for MCC is a challenge, with funding levels having been halved from their peak of over ten years ago. While MCC has stated it recognizes the value of health for development, only a small proportion of its disbursed funds have been directed to health/water and sanitation projects. Most of those funds were for water infrastructure projects, while only a small portion has gone to health-specific projects. Even so, the agency has demonstrated some commitment to coordinating activities with those of U.S. global health efforts such as PEPFAR.