Why Is the U.S. Engaged in Global Health?

The U.S. role in global health is multifaceted. The U.S. government:

What Agencies and Departments Are Involved?

The U.S. engagement in global health is largely carried out by executive branch departments and agencies (see Figure 1), but the legislative branch also plays an important role. 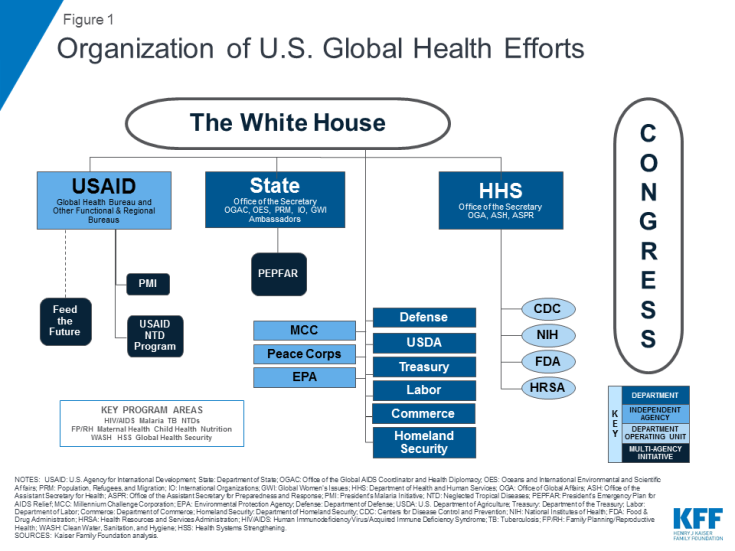 What Types of Efforts Are Supported?4

The U.S. government supports a wide array of bilateral and multilateral global health efforts in countries around the world:

U.S. bilateral (two-party; country-to-country; U.S. support that is for the benefit of another country and is provided to a government, NGO, or other group for this purpose) programs provide direct support to more than 70 low- and middle-income countries and typically operate in a particular set of countries with their own budgets, staff, strategies, objectives, and monitoring and evaluation practices; they often involve multiple U.S. agencies/departments.5 See “What Are the Major Programs?” below.

What Are the Major Programs?

While the U.S. first provided funding to address the emerging global HIV epidemic in 1986, funding and attention has increased significantly in the last decade, particularly following the 2003 announcement of the President’s Emergency Plan for AIDS Relief (PEPFAR) by President Bush. PEPFAR’s launch led to a major increase in U.S. support for HIV prevention, treatment, and care efforts, as well as contributions to the Global Fund, the Joint United Nations Programme on HIV/AIDS (UNAIDS), and the International AIDS Vaccine Initiative (IAVI). The Department of State’s U.S. Global AIDS Coordinator oversees this government-wide effort, which is implemented by USAID, CDC, and other agencies.6 See the KFF fact sheet on the global HIV/AIDS epidemic, the KFF fact sheet on U.S. PEPFAR efforts, and the KFF fact sheet on the U.S. and the Global Fund.

USAID began its global TB control program in 1998, and since that time, the U.S. response has grown, particularly expanding after 2003 when the U.S. government’s commitment to addressing TB was highlighted as part of PEPFAR. Today, led by USAID and implemented by and involving several agencies, U.S. TB efforts focus on diagnosis, treatment, and control of TB (including multi-drug resistant and extensively drug-resistant TB (MDR/XDR TB)) and on research. The U.S. is also a donor to the Global Drug Facility of the Stop TB Partnership, a global network of public and private entities working to eliminate TB.7 See the KFF fact sheet on U.S. TB efforts.

Having historically engaged in NTD efforts through research and surveillance, the U.S. expanded its response by launching the USAID NTD Program in 2006, which aimed to reduce the prevalence of seven NTDs through integrated treatment programs using mass drug administration (MDA), and the U.S. NTD Initiative in 2008, which aimed to intensify efforts and increase funding for activities across the U.S. government. Efforts are led by USAID and involve CDC, the National Institutes of Health (NIH), and other agencies. See the KFF fact sheet on U.S. NTD efforts.

The U.S. has been engaged in international research on FP and population issues as well as other FP/RH efforts, including the purchase and distribution of contraceptives in developing countries, since the 1960s. Today, led by USAID and involving several agencies, U.S. FP/RH activities are designed to decrease the risk of unintended pregnancies and maternal and child mortality through effective interventions, including contraception, counseling, and post-abortion care. See the KFF fact sheet on U.S. FP/RH efforts and the KFF fact sheet on statutory requirements and policies related to these efforts.

The U.S. has been involved in efforts to improve MCH since the 1960s. Today, led by USAID and involving several agencies, U.S. MCH activities aim to: improve equity of access to and use of services by vulnerable populations; bring to scale a range of high impact interventions that mitigate maternal, newborn, and under-five deaths; prevent and address the indirect causes of such deaths (such as HIV, TB, and malaria); strengthen integration of maternal health services with FP; and strengthen health systems. Additionally, some water, sanitation, and hygiene (WASH) activities are part of the environmental health efforts within the USAID MCH program. The U.S. is also a donor to global organizations addressing MCH, like Gavi; UNICEF; and the Global Polio Eradication Initiative (GPEI). See the KFF fact sheet on U.S. MCH efforts, the KFF fact sheet on U.S. polio efforts, and the KFF fact sheet on the U.S. and Gavi.

For more than 40 years, USAID has been involved in nutrition efforts, aiming to prevent undernutrition through interventions such as nutrition education, nutrition during pregnancy, exclusive breastfeeding, and micronutrient supplementation.8 USAID’s nutrition efforts are coordinated with the U.S. Feed the Future Initiative (FtF, launched in 2009), which aims to address global hunger and food security and is led by USAID and the U.S. Department of Agriculture. See the KFF fact sheet on U.S. MCH efforts (which includes U.S. nutrition efforts).

While the U.S. government has supported global health security (GHS) work for more than two decades, its involvement has expanded over time. Meant to reduce the threat of emerging and re-emerging diseases by supporting preparedness, detection, and response capabilities worldwide, U.S. GHS efforts are primarily carried out by USAID, CDC, the Department of Defense (DoD), and the Department of State. The U.S. has also played a key role in development of the “Global Health Security Agenda (GHSA),” an international partnership launched in 2014 and now involving more than 60 countries and international organizations. Through the GHSA, U.S. government agencies work with host governments and partners to help countries make measurable improvements in capabilities to detect and respond to emerging disease events and achieve global health security targets. See the KFF brief on the U.S. GHS efforts.

Where Do These Programs Operate?

U.S. global health efforts are carried out in more than 70 countries (mostly in Africa but also in South and Central Asia, the Near East, East Asia and the Pacific, the Western Hemisphere, and Europe and Eurasia) through bilateral support to countries or through regional programs.9 Additional countries are reached indirectly through U.S. contributions to multilateral organizations. The U.S. typically operates multiple global health programs in most of the countries.

While more support is generally directed to countries facing a higher burden of disease, other factors influencing where U.S. health assistance is directed include the presence of willing and able partner governments; a history of positive relations and goodwill with host countries; strategic and national security priorities; funding; and personnel availability.10

How Much Funding Is Provided?11 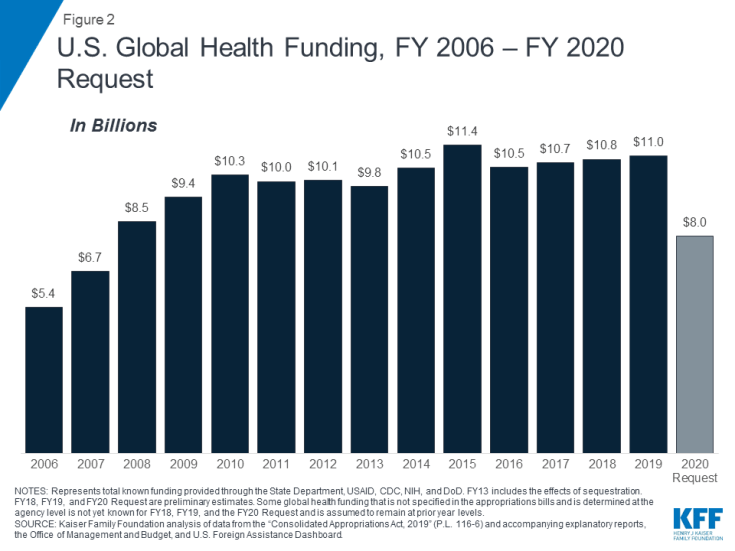