Medicaid, the nation’s health program for low-income people, has been a critical source of coverage for low-income women for decades and provided health and long-term coverage to 1 in 8 nonelderly adult women in 2019. The Trump Administration made a significant change to the program by allowing some states to impose work requirements for individuals covered by Medicaid. Currently, none of these programs are in effect as several have been blocked by court orders and other states have delayed implementation due to the coronavirus pandemic. Conversely, the Biden Administration has initiated a process to reverse the Trump changes. On February 12, 2021, the Biden Administration sent letters to states with approved work requirements informing them CMS has “preliminarily determined” that work requirements do not promote Medicaid program objectives and that CMS was beginning the process to determine whether to withdraw these waivers. The Biden Administration took further action on February 22, 2021 by filing a motion asking the U.S. Supreme Court to remove a case about the legality of work requirements from their calendar, for which oral arguments are currently scheduled for March 29, 2021.  For more details and background on work requirements and the status of the litigation see Work Among Medicaid Adults: Implications of Economic Downturn and Work Requirements and Medicaid Work Requirements at the U.S. Supreme Court.

Should states be allowed to implement Medicaid work requirements, this would heavily impact women on the program, who make up the majority of adult Medicaid enrollees. Women are more likely to qualify for Medicaid than men because they have lower incomes and have been more likely to qualify under one of Medicaid’s traditional eligibility categories: pregnant, parent of a child under 18, disabled, or being over 65. Additionally, the COVID-19 pandemic has increased barriers to work and fueled massive unemployment, particularly in industries that employ significant shares of low-income women of color, who comprise a disproportionate share of Medicaid enrollees. This data note documents differences by sex in the work status of non-elderly (19-64) adult Medicaid enrollees who were not receiving Supplemental Security Income (SSI) and were not dually eligible for Medicare in 2019, and highlights differences between different subgroups of women and by parenting status.

What Was the Work Status of Women and Men Covered by Medicaid Prior to the COVID-19 Pandemic?

Nearly seven in ten men (69%) and nearly six in ten women (59%) enrolled in Medicaid worked in 2019 (Figure 1).1 More than half of men (53%) and more than a third of women (35%) on Medicaid worked full-time during the year. A larger share of women (24%) compared to men (15%) worked part-time. Over four in ten (41%) women and three in ten (31%) men enrolled in Medicaid did not work in 2019. Most women and men with Medicaid who were not working reported it was due to caregiving responsibilities, illness or disability, or because they were going to school (discussed further below). Six percent of women and 9% of men with Medicaid reported they did not work because they were retired, could not find work, or for some other reason (data not shown). Women with fair or poor self-reported health status (41%) were less likely to work in 2019 than those in excellent or very good health (65%) (Appendix Table 1). 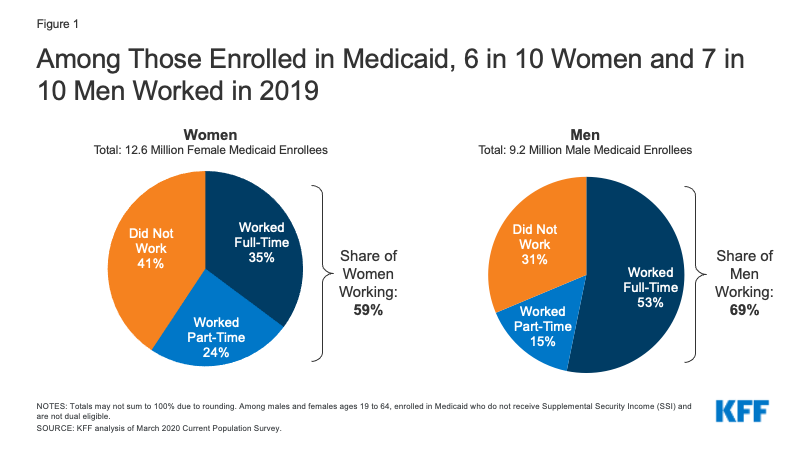 Many Medicaid enrollees are working in service jobs with few benefits, such as health insurance and paid sick days. Many of these jobs have also been heavily impacted by the COVID-19 pandemic. The top industries that employ women with Medicaid are the restaurant and food service industry, schools, and the home health care service industry, while men tend to work in construction, the restaurant and food service industry, and landscaping services (Table 1). Women in particular have been affected by COVID-19’s impact on the economy. While women are half of the “essential” workforce, women have also lost their jobs at higher rates than men.

.
What Are the Reasons That Some Women and Men on the Program Do Not Work? 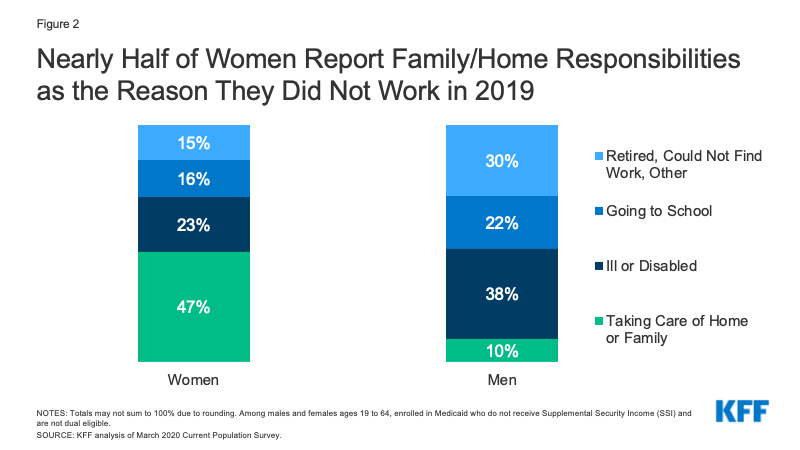 Figure 2: Nearly Half of Women Report Family/Home Responsibilities as the Reason They Did Not Work in 2019 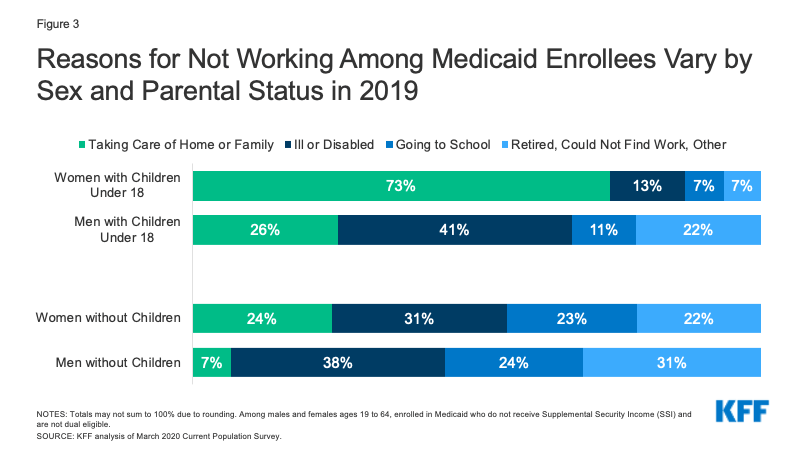 Figure 3: Reasons for Not Working Among Medicaid Enrollees Vary by Sex and Parental Status in 2019

While most non-elderly, non-SSI, non-dual adults with Medicaid were working in 2019, among those who were not working, women were more likely to report it was because they were taking care of children or other family members. In contrast, more men reported they were not working because of an illness or disability. Most states with pending or approved work requirements waivers exempt caregivers of children or disabled adults from these requirements, although this varies by state and age of the child. For example, while some states would extend childcare exemptions only to parents with children under one, others would provide exemptions for parents with children under 18. Thus, most adults enrolled in Medicaid would likely meet work or reporting requirements if implemented, although non-workers who would be exempt from the requirements would have to document the reason for their exemption, which research has found can be onerous. Work requirements could lead to Medicaid coverage losses not only for those who lose eligibility because they don’t work or meet an exemption but also among people who remain eligible for the program but lose coverage due to new administrative burdens or red tape. In Arkansas, over 18,000 people lost their Medicaid coverage during the four months in 2018 when Medicaid work requirements were in effect, and only 11% regained coverage when they were able to reapply.

Of note, the data presented predate the COVID-19 pandemic which has disproportionately affected the very industries that have played a critical role providing employment to low-wage workers, the same women and men who are covered by Medicaid. In particular, the pandemic has impacted the health, employment, and economic status of low-income women of color. With a massive rise in unemployment for these women, the need for Medicaid grows, yet finding employment becomes more difficult. Additionally, with many children remaining at home due to childcare and school closures, many mothers find they cannot work outside the house. Even women without children may be more likely to be addressing family caregiving needs that have spiked along with rising COVID-19 infections. Since taking office, President Biden and his team have initiated a process for halting work requirements from moving forward as a condition of eligibility in any state. As the Supreme Court and the Biden Administration consider next steps on work requirements, their decisions will affect the ability of low-income women to secure health coverage.