The health and economic implications of the coronavirus pandemic have further heightened existing interest in the work status of Medicaid adults. Many individuals enrolled in Medicaid are employed in industries particularly at risk for income or job loss (such as food and other service industries) or at risk of contracting COVID-19 (such as health care or grocery industries) because they remain exposed to individuals in public/service settings. Many individuals who currently have job-based or other private coverage may become newly eligible for Medicaid if they lose their jobs during the economic downturn; however, Medicaid coverage options will be more limited in states that have not adopted the ACA Medicaid expansion. The pandemic and associated economic downturn have underscored Medicaid’s role as a coverage safety-net: national data shows an increase in Medicaid enrollment of 8.6% from February to September 2020, a trend that likely reflects changes in the economy as well as provisions in the Families First Coronavirus Response Act that require states to ensure continuous coverage to current Medicaid enrollees to access a temporary increase in the Medicaid match rate.

To provide context to the landscape of Medicaid and work during the coronavirus pandemic, this brief explores work status and characteristics of Medicaid enrollees prior to the pandemic. In addition to an analysis of data on adult Medicaid enrollees from 2019, this brief also includes perspectives from enrollees who participated in focus groups in three cities (Cleveland, Detroit, and Milwaukee) in January 2020. Data and enrollee perspectives from before the pandemic provide key context for examining the implications of the coronavirus crisis for this population and the potential effects of both the pandemic and work requirements on their jobs, health and health coverage, and financial security.

What Was the Work Status of Medicaid Adults Prior to the Pandemic?

Prior to the pandemic, most Medicaid adults who did not face a barrier to work were working (Figure 1). KFF analysis of survey data from 2019 reveal that, overall, more than six in ten (63%) non-dual, non-SSI, nonelderly adults with Medicaid (referred to hereafter as “Medicaid adults”) were working full or part-time. Among Medicaid adults who work, nearly half (48%) worked full-time (at least 35 hours per week) for the entire year (at least 50 weeks) (Appendix II, Table 2). Caregiving responsibilities were primary reasons for not working among remaining Medicaid adults. Illness or disability or school attendance were other leading reasons reported for not working. The remaining seven percent of Medicaid adults reported that they are retired, unable to find work, or were not working for another reason. The pandemic has led to job loss overall and among low-income workers specifically and also could exacerbate barriers to work such as increased caregiving responsibilities. The work status of Medicaid adults varied by certain demographics. Those in better health and with more education were more likely to be working (Appendix II, Table 1). 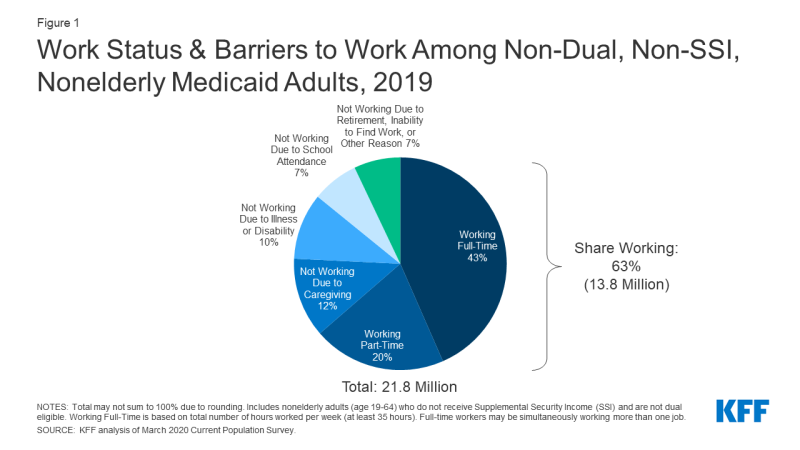 Adults who work full-time may still be eligible for Medicaid in expansion states because they work low-wage jobs and still meet income eligibility criteria, but those in non-expansion states are less likely to be eligible. Medicaid expansion covers many adults working full- or part-time because they work low-wage jobs that make their family income near poverty and are unlikely to have an offer of coverage from their employer (Figure 2). An individual working full-time (35 hours/week) for the full year (50 weeks) at the federal minimum wage ($7.25 per hour) earns an annual salary of $12,688, just below the Federal Poverty Level (FPL) for an individual in 2021 ($12,880). This income is below the Medicaid eligibility limit of 138% FPL for nearly all nonelderly adults in expansion states ($17,774/year for an individual or $30,305 for a family of three in 2021), meaning that an adult with this income would be eligible for Medicaid in an expansion state. However, working adults may be ineligible for Medicaid in non-expansion states where the median eligibility limit for parents as of January 2020 is 41% (and ranges from 17% in Texas to 100% in Wisconsin) and childless adults are not eligible (except in Wisconsin). 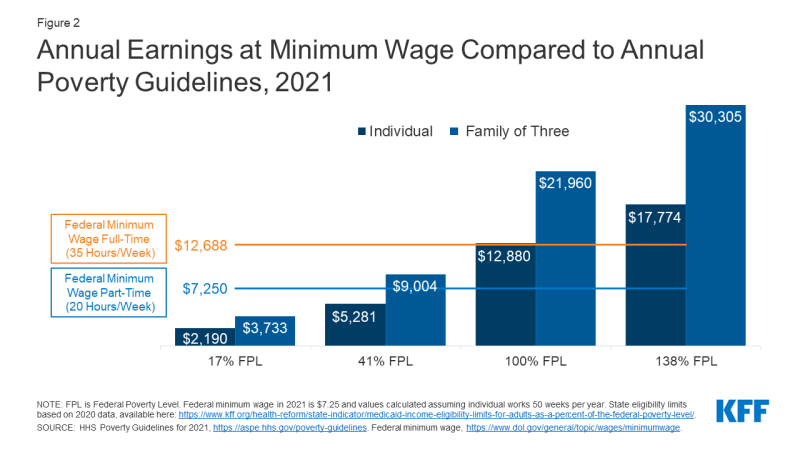 How has the Pandemic Affected Medicaid Workers and Non-workers?

Many Medicaid adults who work were likely affected by COVID-related job or income loss. Prior to the pandemic, nearly five in ten (46%) Medicaid workers were employed in firms with fewer than 50 employees (Figure 3). Analysis from the Bureau of Labor Statistics (BLS) shows that smaller employers1 experienced larger job loss immediately following the onset of the pandemic and have experienced slower recovery in the months since. Further, many Medicaid workers are employed in industries affected by the economic downturn. More than one in ten working Medicaid adults worked in restaurants or food services. The next largest group of Medicaid workers were employed in the construction industry (Appendix II, Table 8). Data from BLS shows significant and ongoing increases in unemployment rates in these industries since the onset of the pandemic (with January 2021 unemployment rates of 9.4% for construction and 14.4% for food services and drinking places2) as well as in unemployment rates for other industries that commonly employ Medicaid workers such as education and health services. Within industries, top occupations among Medicaid workers include cashiers, drivers, janitors, and cooks. State comments on 2020 unemployment data filings indicate that most claims are for people previously employed in service industries, particularly accommodation and food services, with an increasing rate for people in retail, wholesale trade, and construction industries. Before the pandemic, Medicaid enrollees participating in focus groups reported instability in the availability of work and difficulty moving up from lower paying to higher paying and more stable jobs (Appendix I). In addition, many Medicaid workers reported limited access to benefits, with fewer than four in ten (38%) Medicaid workers reporting access to paid sick leave in 2019 (data not shown).3 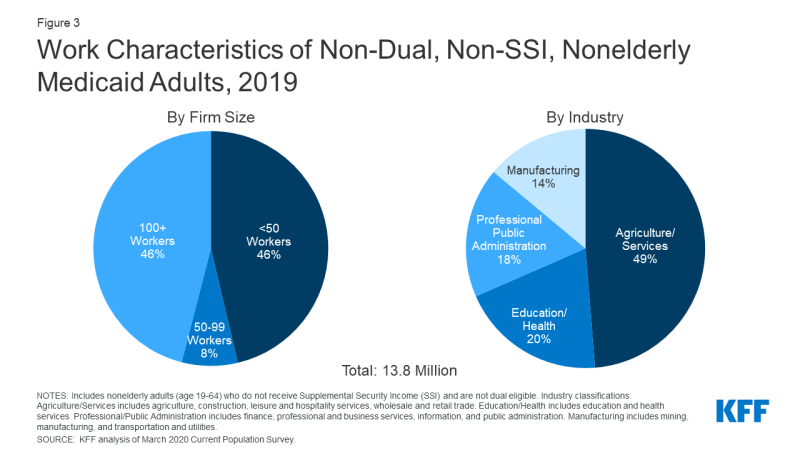 The pandemic has likely exacerbated challenges to full-time work reported by Medicaid enrollees prior to the pandemic.
Medicaid adults who work part-time (32% of all workers) cited reasons for working part-time including work limits such as shorter work weeks (less than 35 hours per week) (13%), slack work/business conditions (19%), or inability to find full-time work (8%) (Figure 4). The economic downturn associated with the pandemic is likely to have exacerbated these challenges. Part-time workers also pointed to childcare problems (6%) and other family or personal obligations (14%). Personal issues related to childcare or other caregiving responsibilities are likely to become greater challenges due to the economic conditions and widespread closures of in-person schools and day care facilities from the pandemic. For example, those that maintain jobs might see reduced hours, more fluctuation in incomes/schedules, or a lack of childcare options making it difficult to maintain work. 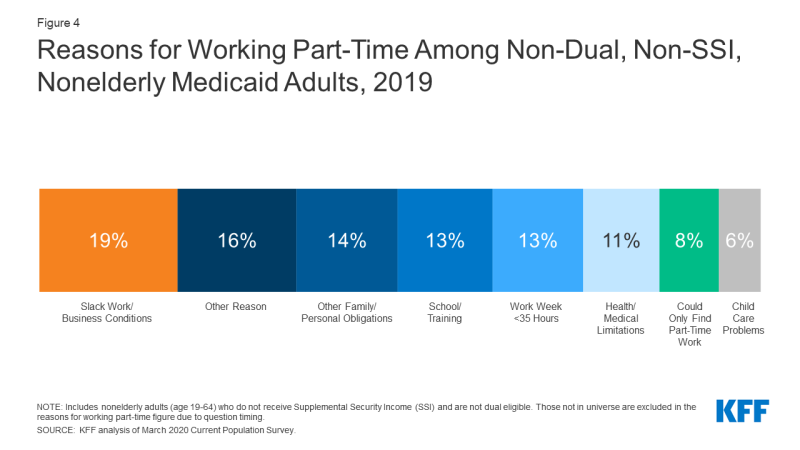 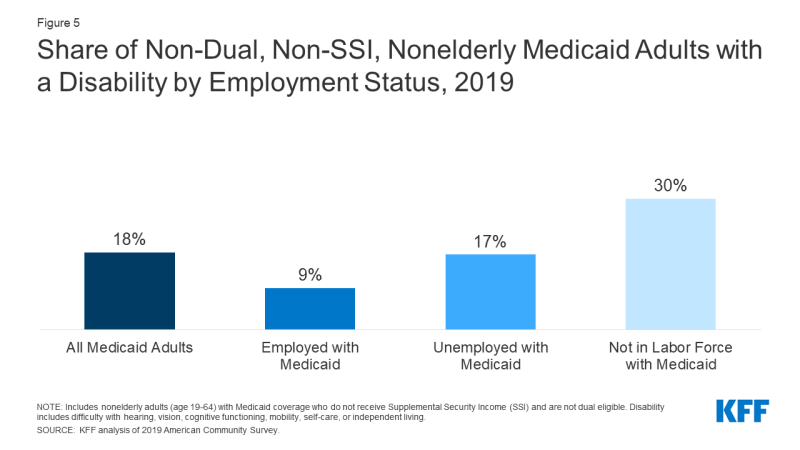 As a result of job loss or reduced hours, many workers may have had their income or financial security worsened by the pandemic. Working and non-working adults with Medicaid faced high rates of financial and food insecurity even before the pandemic, which could increase as more Medicaid workers experience job and income loss due to COVID-19. Between December 9-December 21, 65% of Medicaid workers and 73% of non-workers reported that it was “very” or “somewhat” difficult for their household to pay for usual expenses, including food, rent, medical expenses, etc.5 Access to food is an additional challenge for many Medicaid adults, with many enrollees reporting food insufficiency but fewer than half enrolled in the Supplemental Nutrition Assistance Program (SNAP). Both Medicaid enrollees who were working and were not working provided details about financial struggles living near or below poverty that are likely to be worse with the economic fall-out from the pandemic (Appendix I).

People who remain eligible for Medicaid could lose coverage as a result of work and reporting requirements. In Arkansas, over 18,000 people lost coverage when the work and reporting requirements were in place from August to December 2018. A small share of those who lost coverage reapplied and regained coverage when they were able to do so at the beginning of 2019. An earlier KFF analysis of potential nationwide reductions in Medicaid coverage if all states implemented work requirements estimated that most disenrollment would be among individuals who would remain eligible but lose coverage due to new administrative burdens or red tape, and only a minority would lose eligibility due to not meeting new work requirements. In addition, both state and federal decisions on increasing the minimum wage could lead to Medicaid coverage loss for individuals due to increased income, particularly in non-expansion states.6

Loss of coverage could have negative implications for a person’s ability to work and can also increase uncompensated care for providers. Enrollees in Arkansas noted that Medicaid coverage enabled them to work by covering medications and services needed to manage mental health, asthma, gastrointestinal conditions, and other chronic health conditions. Without coverage, these conditions could worsen and interfere with enrollees’ ability to work or their ability to look for work and could also result in emergency room visits or preventable hospitalizations. In addition, providers anticipated that coverage losses tied to work requirements could result in increased uncompensated care for providers.

Medicaid enrollees face an array of barriers to complying with work and reporting requirements. One in ten (10%) of Medicaid adults report no access to the Internet, which may pose a barrier to both gaining a job and complying with work reporting requirements (Figure 6). Interviews with Arkansas enrollees show that other barriers include difficulty using computers, lack of transportation, and unstable housing. Another report examining state data shows that measures to provide safeguards intended to protect coverage for people with disabilities and others who should not have been subject to the requirements are complex and hard to use. This experience is consistent with findings that TANF work requirements adversely affected people with disabilities who likely were eligible for an exemption based on a disability but did not obtain one. 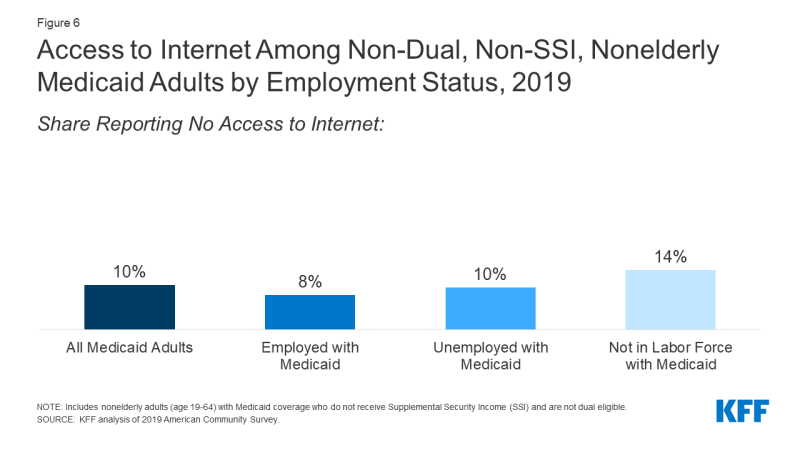 Work requirements may not result in increased employment or employer-based health coverage. Arkansas enrollees reported that new work requirements did not provide an additional incentive to work, beyond economic pressures to pay for food and other bills. Another study found that work requirements in Arkansas did result in significant changes in employment. Among individuals who may find work, low-income jobs are not likely to come with employer-sponsored health insurance (ESI). Nonelderly workers with incomes below 100% FPL were the least likely to be offered coverage at their jobs compared to those with higher incomes in 2018. Very few part-time workers, especially those with low-incomes, receive an employer-sponsored offer of health benefits.

The COVID-19 pandemic will continue to impact working and non-working Medicaid enrollees by increasing barriers to work and heightening financial insecurity. The pandemic will likely result in many Medicaid enrollees losing their jobs as the industries in which enrollees work are likely to be hardest hit by the pandemic. Medicaid enrollees who were not working are likely to face the same barriers that affected them before the pandemic (e.g., underlying health conditions and caretaking responsibilities) as well as additional barriers to finding work due to the economic downturn. For enrollees who continue to work, Medicaid will be an important support as Medicaid workers are employed in jobs that may face high risk of contracting coronavirus. The Families First Coronavirus Response Act (FFRCA) includes “maintenance of eligibility” protections to ensure continued coverage for Medicaid enrollees through the public health emergency period. In addition, Medicaid—along with ACA premium subsidies—will act as a coverage safety-net for many who lose jobs and income and newly qualify. Coverage options will be more widely available in expansion states where eligibility for Medicaid is available for nearly all adults with incomes up to 138% FPL compared to non-expansion states where more people experiencing job loss could fall into a coverage gap and become uninsured. Medicaid expansion also increases the likelihood that individuals who gain employment and/or hours can retain their coverage despite increased income.