Health insurance brings with it a measure of financial security. Among those with ACA-compliant coverage, more than half (56 percent) say they feel well-protected by their health plans, including 59 percent of those who were previously uninsured. Still, this leaves over a third saying they feel vulnerable to high medical bills, rising to 51 percent in the “plan switchers” group. Those with non-compliant plans are more likely to say they feel well-protected, with the difference between the compliant and non-compliant groups largely driven by the “plan switchers” (see Appendix Table 5 for more details). By comparison, people with employer-sponsored coverage interviewed as part of a separate national survey are also more likely than those in compliant plans to say they feel well-protected (again, not surprising due to the fact that employer plans tend to have lower patient cost-sharing than non-group coverage and employers generally cover a portion of the premium). 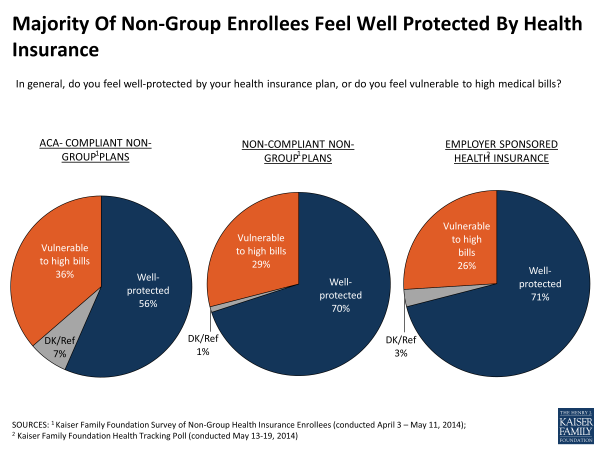 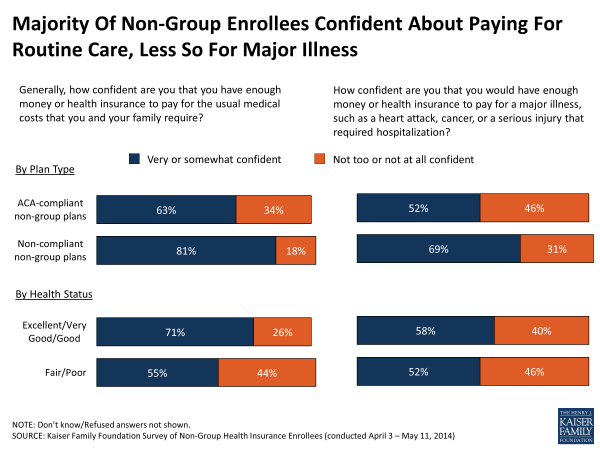 Despite the fact that most people report being satisfied with their premiums, cost pressures remain. Overall, forty-three percent of those with ACA-compliant plans say it is “very” or “somewhat” difficult for them to afford to pay their premium each month. 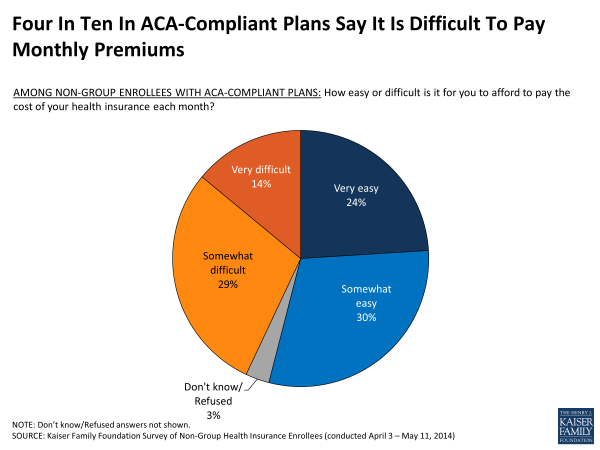 The ACA’s premium tax credits were designed to help alleviate affordability concerns for people with low and moderate incomes. The survey finds that nearly half (46 percent) of Exchange enrollees say they are getting financial help from the government to help pay their monthly premium, which is substantially lower than official data (according to the Department of Health and Human Services, 85 percent of those selecting a plan in the Marketplace qualified for a premium tax credit).1 Multiple factors may be contributing to this apparent under-reporting on the survey, but it is likely that at least some individuals receiving government financial help may be unaware that the government is paying a portion of their premium. As noted in the section above on health literacy, insurance concepts are complicated and many people have trouble reporting detailed information about their plans. During the enrollment process, some people may have been focused on the bottom line question of “What do I pay?” and less focused on whether that amount was subsidized or not. Still, the vast majority (85 percent) of those who do report getting assistance – representing 39 percent of all Exchange enrollees – say they would not have been able to afford insurance without this financial help.

Most people with non-group insurance also express at least some level of worry about their future ability to afford and access care and insurance. For example, about six in ten (62 percent) say they are “very” or “somewhat” worried that their insurance company will raise their premium so much that they will no longer be able to afford insurance. Among those who report receiving government subsidies, over half (54 percent) say they are worried that their income will change and they will no longer be eligible for this financial help. 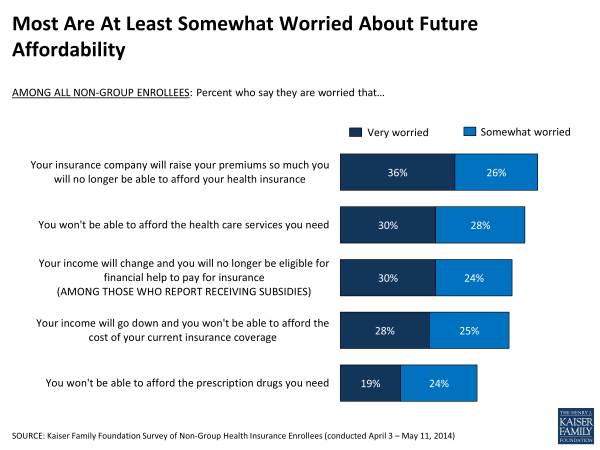 Section 2: How Do People In Different Groups Feel About Their Coverage? Section 4: The Process Of Shopping For And Obtaining Coverage