Among the entire non-group market, about half of individuals (48 percent) report having coverage obtained from a state or federal Health Insurance Exchange, 16 percent have ACA-compliant coverage purchased outside of the Exchanges, and three in ten (31 percent) have non-ACA-compliant plans (those that have been in effect since before January 1, 2014).

One of the questions that has yet to be answered by state and federal data is what share of enrollees in ACA-compliant plans were previously uninsured. The survey finds that half of all those with compliant plans report being uninsured just prior to purchasing their current plan, while about one in five each say they were previously covered by another non-group plan (19 percent) or had employer coverage or COBRA (18 percent), and 9 percent previously had Medicaid or other public coverage. Exchange enrollees are more likely to say they were previously uninsured (57 percent), while those buying ACA-compliant plans outside the government marketplace are more likely to report having previous employer coverage (30 percent) or other non-group coverage (27 percent). 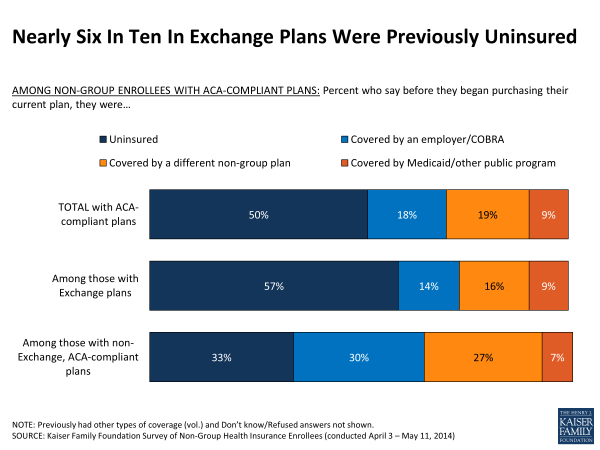 Among those who were previously uninsured and enrolled in a Marketplace plan, most say the reason they previously lacked coverage was because they couldn’t afford it or had no access to employer-sponsored insurance. Most of this group had been uninsured for a long time – seven in ten (71 percent) say that before buying their current plan they had been uninsured for two years or more, including 45 percent who say they were uninsured for at least five years. Seven in ten (72 percent) of the previously uninsured in Exchange plans say they decided to buy their own health insurance because of the ACA, while just over a quarter (26 percent) say they would have gotten insurance anyway, even without the law. These shares are similar when based on all those in ACA-compliant who were uninsured prior to purchasing their current plan. 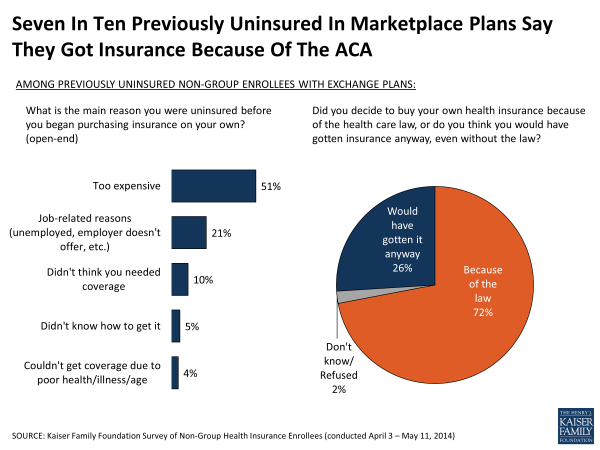 Data from the Department of Health and Human Services provide some basic demographics, including the age and gender distribution, for individuals who signed up for Exchange plans.1 However, so far there has been no reliable information about the demographics of those enrolling in non-Exchange plans as well, or about the health status of either of these groups. The survey finds that the age and gender distribution is similar for those in ACA-compliant plans purchased inside and outside the Marketplace; overall, a third (34 percent) of adults with compliant plans are under age 35 and slightly fewer than half (47 percent) are male. By comparison, those with non-compliant plans are somewhat younger (44 percent under age 35) and more likely to be male (56 percent). Nearly two-thirds (64 percent) of those with ACA-compliant plans report having individual coverage, while those with non-compliant plans are more evenly split between individual (47 percent) and family coverage (53 percent). (See Appendix Table 1 for more details.)

The health status of enrollees has particular significance because it has implications for whether premiums this year will be adequate to cover the health expenses of enrollees and how much insurers may increase premiums for next year. Since people are now guaranteed coverage regardless of their health, there has been an expectation that some people with pre-existing conditions who were previously denied access to insurance will enroll. However, there has been substantial uncertainty about whether healthier people will enroll as well, motivated by premium subsidies and the ACA’s requirement that people have coverage or pay a penalty.

While the majority of individuals in non-group plans report being in good health, the survey finds that those with ACA-compliant plans – which insurers rate as a single risk pool – are more likely than those with non-compliant plans to report their health as “only fair” or “poor” (17 percent versus 6 percent). This suggests that people in new, ACA-compliant plans are somewhat sicker than those in the non-group market previously, some of whom have been able to retain their non-compliant coverage under transition policies. What this might mean for premiums in the non-group market is still uncertain, however, since many insurers anticipated a sicker-than-average mix of enrollees when they set their premiums for this year.

About The Groups Described In This Report Section 2: How Do People In Different Groups Feel About Their Coverage?