Section 4: The Process Of Shopping For And Obtaining Coverage

Early problems with Healthcare.gov and many state Exchange websites were widely reported in the media, and the survey finds that about two-thirds of Exchange enrollees and nearly half (47 percent) of those with compliant coverage purchased outside the Exchanges spent at least some part of the shopping and enrollment process on the Internet. Other methods of shopping and enrollment were also common, however. Roughly half of Exchange enrollees and about four in ten non-Exchange purchasers report spending at least part of the process on the phone, while just over a quarter (27 percent) of those with Exchange plans and more than four in ten (43 percent) of those with non-Exchange plans say they spent time in person with someone helping them sign up for coverage. Internet enrollment required the biggest time investment for the largest share of people, with 18 percent of Exchange enrollees and 16 percent of non-Exchange purchasers saying they spent at least 5 hours shopping and enrolling on the web. 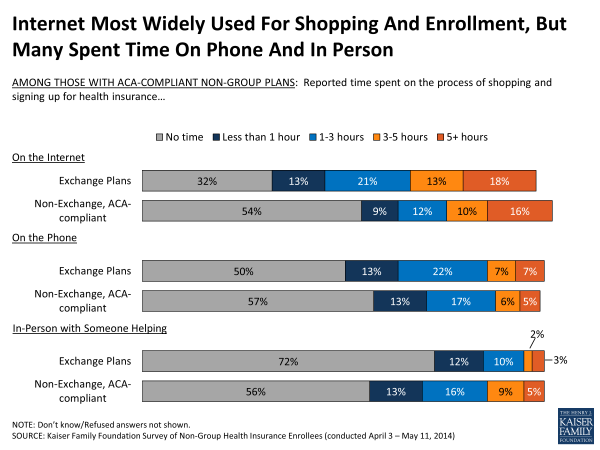 Overall, half of those in ACA-compliant plans say they got outside help with the enrollment process, while the other half say they completed the process on their own. The most common source of help for people with Exchange coverage was an Exchange representative (24 percent), while the most common source of help for those with coverage obtained outside the Exchanges was a health insurance broker or agent (24 percent).

Perhaps surprisingly given the extent to which Exchange website problems were reported in the media, most people in ACA-compliant plans purchased on and off the Exchanges say it was at least somewhat easy to compare costs and coverage when shopping for plans.1 Still, 35 percent of Exchange enrollees in states using Healthcare.gov and 30 percent of those in states with their own Exchange websites say it was at least somewhat difficult to set up an account with the marketplace, and roughly three in ten say it was difficult to figure out if their income qualified them for financial assistance. 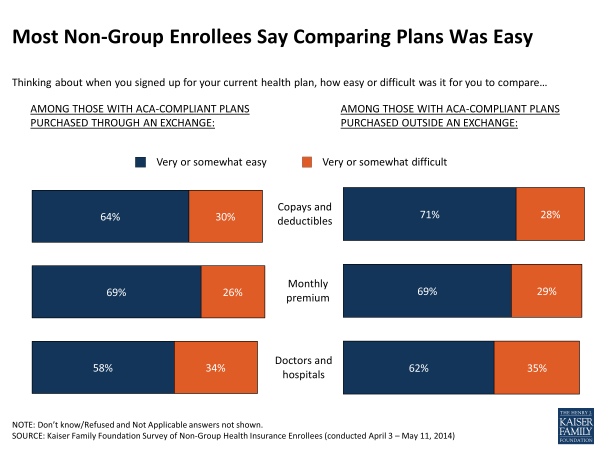 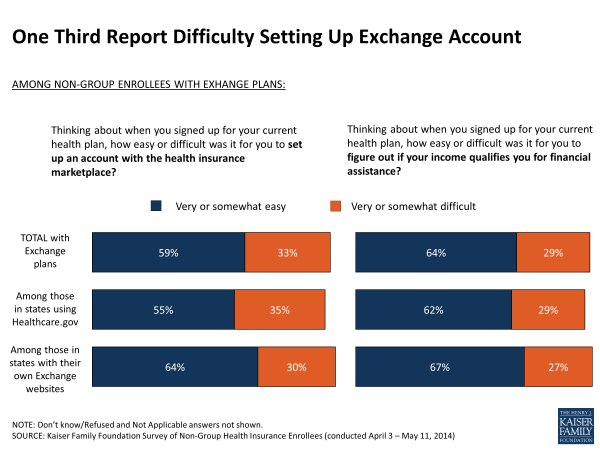 When it comes to choosing their current plan, those with compliant coverage report considering a variety of factors as important to their health plan choice, with costs rising to the top of the list. Among those who considered multiple plans, eight in ten (80 percent) say the monthly premium was a “very” or “extremely” important factor in choosing their current plan over other choices available, and seven in ten (72 percent) say the same about the plan’s copay and deductible. Somewhat fewer – though still sizeable shares – report placing a lot of importance on provider choice and covered benefits (63 percent each), while far fewer say recommendations from friends or family were an important factor (24 percent). 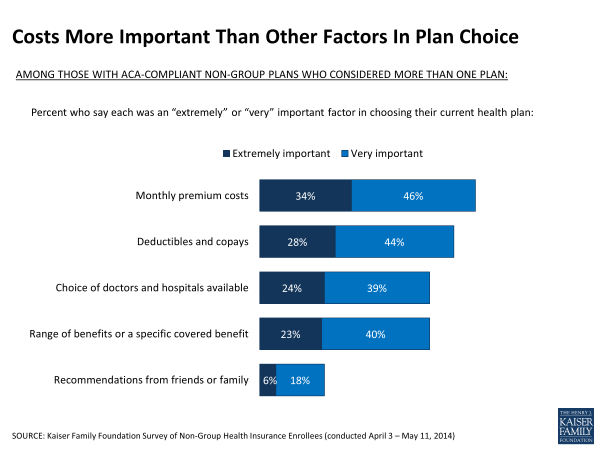 Section 3: Affordability And Financial Protection Section 5: How Do Non-Group Enrollees Feel About The ACA?