Section 2: How Do People In Different Groups Feel About Their Coverage?

The large majority of those with ACA-compliant plans purchased both inside and outside the Exchanges rate their coverage as excellent or good (72 percent of those with Exchange plans and 70 percent of those with non-Exchange plans). Those in non-compliant plans are even more likely to give high marks to their plans (85 percent), though this is offset by a larger share of those in compliant plans saying they don’t know how to rate their plans rather than a larger share giving their coverage poor marks, likely a reflection of the fact that most of those in compliant plans had only recently purchased coverage when the survey was conducted. Responses to this question are also similar to those given by people with employer-sponsored insurance in a separate national survey conducted in May.1 (See Appendix Table 2 for more details.) 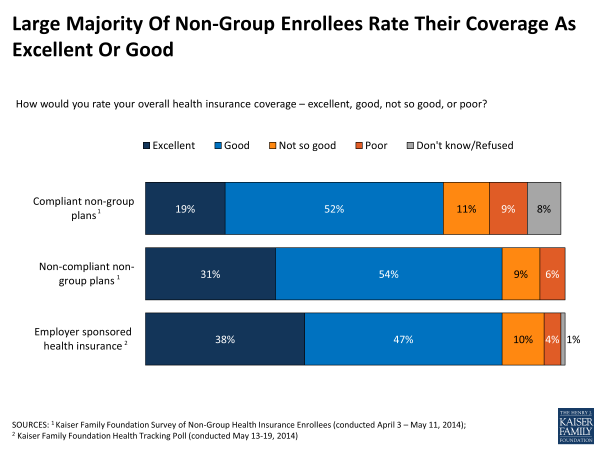 More than half of those in compliant plans say their insurance is an excellent or good value for what they pay for it, though roughly four in ten rate the value as “only fair” or “poor,” similar to the shares among those with non-compliant plans. By comparison, those with employer-sponsored coverage interviewed in a separate national survey were more likely to rate their plan as an excellent or good value, likely reflecting the fact that for most of them, the employer pays a large portion of the premium.2 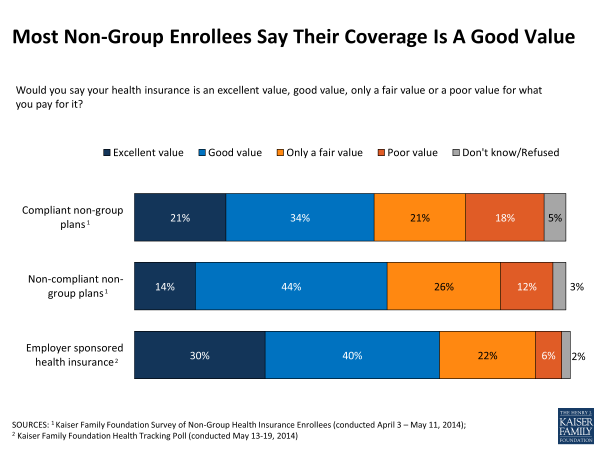 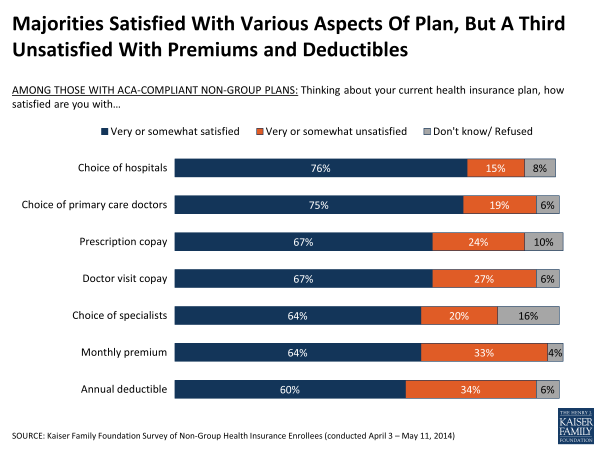 More specifically when it comes to premiums, the survey finds that among those who previously bought non-group insurance and have switched to a new, ACA-compliant plan (referred to here as “plan switchers”), nearly half (46 percent) say their premium is lower under their current plan than it was under their previous plan, and about four in ten (39 percent) say it is higher. 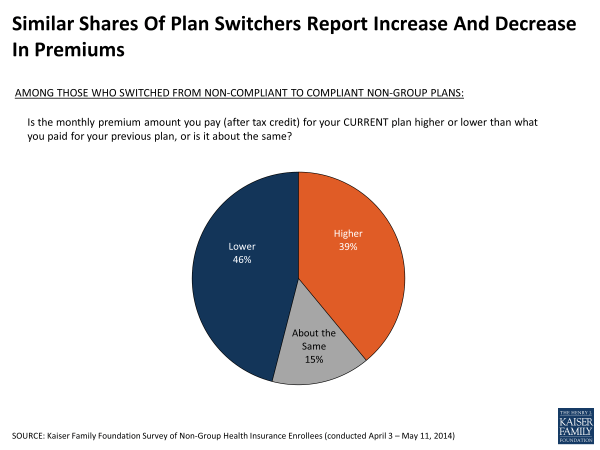 Survey responses for plan switchers also indicate that their deductibles and level of coverage are, on average, similar to what they had in their previous plans. Roughly a third each of this group says their current deductible is higher, lower, and about the same as under their previous non-group plan. Similarly, when asked about the range of covered services and level of financial protection offered under their new plans, about four in ten plan switchers say these things are about the same, while roughly equal shares say they are better and worse. 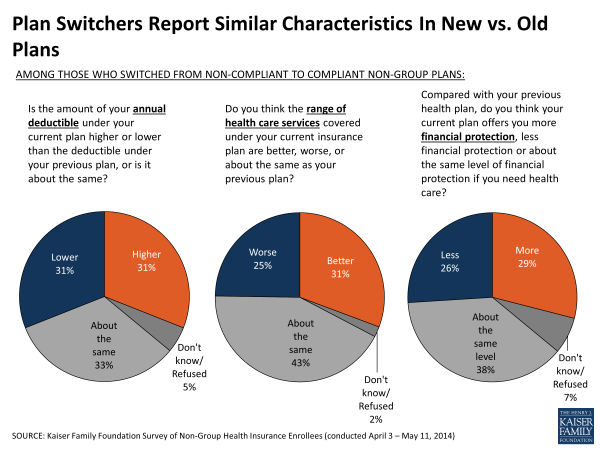 Responses among plan switchers do offer some evidence of a trend toward plans with narrower networks. While over half say their choice of providers is “about the same” under their new plan as under their old plan, those reporting a change in the degree of choice are more likely to say they have less choice versus more choice when it comes to primary care doctors (32 percent versus 10 percent) and specialists (24 percent versus 11 percent). 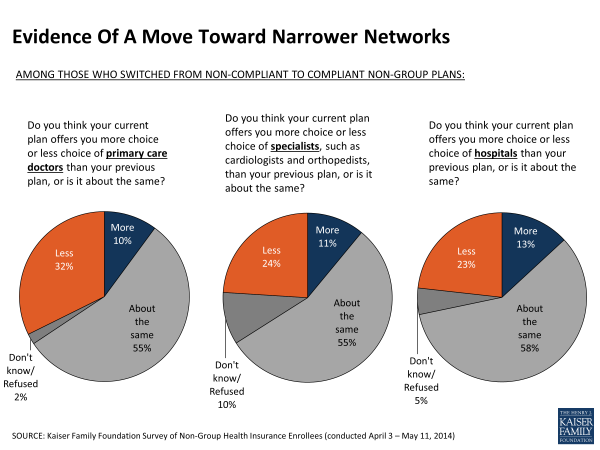 Despite the fact that most plan switchers report paying similar premiums and getting similar coverage compared to their previous plans, this group stands out as being less satisfied with their plan costs and less likely to perceive their coverage as a good value compared to those in compliant plans who were previously uninsured. For example, 51 percent of plan switchers say the value of their coverage for what they pay for it is “only fair” or “poor”, compared with 32 percent of those who were previously uninsured. Similarly, plan switchers are twice as likely to say they are not satisfied with their premium compared with those who were previously uninsured (51 percent versus 25 percent). These differences may be related to the fact that about half of plan switchers report having received a cancellation notice from an insurer in the past year, compared with very small shares of those who were uninsured or had employer coverage before purchasing their current plan (see Appendix Tables 2 & 3 for more details). 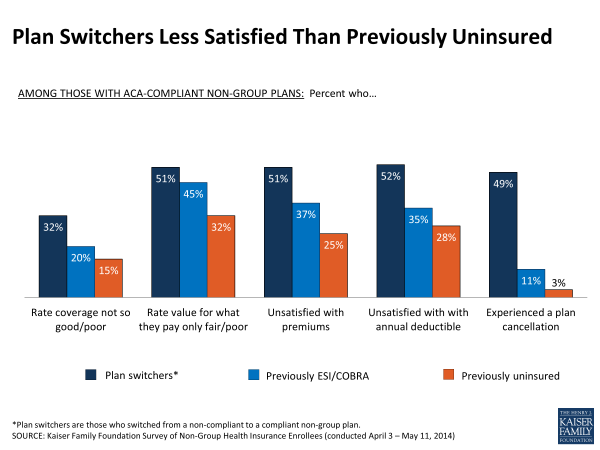 What People Know And Don’t Know About Their Coverage

Health insurance is complicated, and many previous studies have documented gaps in health insurance literacy among consumers. The survey finds evidence of this among those who purchase their own coverage, with many respondents unable to answer some basic questions about their plans. For example, nearly one in five non-group enrollees (18 percent) say they don’t know the amount of their monthly premium and almost four in ten (37 percent) don’t know the amount of their annual deductible. Among those with ACA-compliant plans, three in ten (30 percent) say they don’t know the metal level of their plan (platinum, gold, silver or bronze)3, and among those who report getting a government subsidy to defray their premium cost, nearly half (47 percent) couldn’t say what the amount of the subsidy is.

Some groups are more knowledgeable than others, including college graduates, those with higher incomes, and small business owners. Plan switchers, who likely have more experience buying coverage in the non-group market, are also more likely than those who were previously uninsured to be able to report the metal level of their plan and their premium and deductible amounts.

In addition to knowledge gaps about their own plans, a third (33 percent) of those with non-group coverage are unaware that the ACA provides financial assistance to help low- and moderate-income Americans purchase coverage. Those in compliant plans purchased outside the Exchanges (53 percent) are the least likely to know that the ACA provides these subsidies, while awareness is somewhat higher among those in non-compliant plans (66 percent) and highest among those with Exchange coverage (76 percent).

Despite these gaps in knowledge, most people with non-group coverage feel they have a pretty good idea of what their plan covers (75 percent say they understand this “very” or “somewhat” well) and what they will have to pay out-of-pocket when they use services (83 percent). This is true even among those who were uninsured before purchasing their current plan (See Appendix Table 4).