The vast majority of OBGYNs prescribe/provide oral contraceptive pills (OCPs) (98%), intrauterine devices (IUDs) (96%), vaginal rings (96%), contraceptive injections (Depo-provera) (95%), and the patch (91%). Slightly fewer provide contraceptive implants (Nexplanon) (84%); of note, providers must complete a 2-hour live training from the manufacturer in order to provide Nexplanon, which may serve as a hurdle to some in delivering this method of contraception. Notably fewer OBGYNs provide diaphragms or cervical caps (65%) than other methods of non-emergency contraceptives (Figure 1). 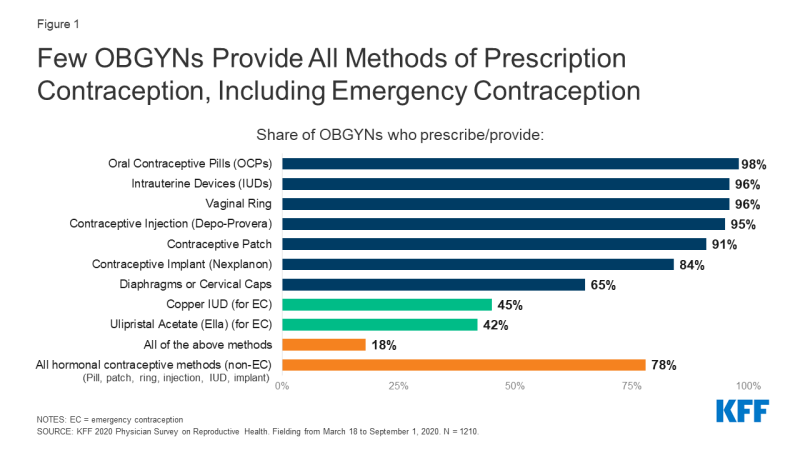 A higher share of OBGYNs who are female compared to male, younger compared to older, and work in large practices compared to small reported providing all methods of contraception (Table 2). 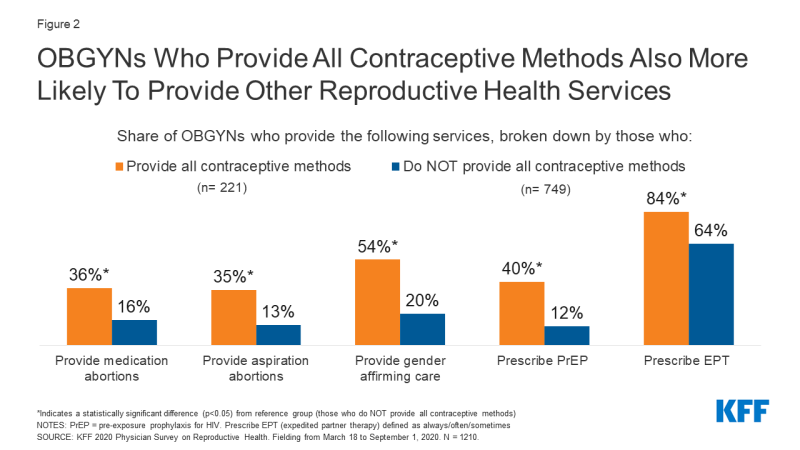 Among the three commonly used methods of emergency contraception (EC), the copper IUD and ulipristal acetate (Ella) must be prescribed, and levonorgestrel (Plan B) can be purchased over the counter. For the two methods that must be prescribed/provided by a clinician, fewer than half of OBGYNs provided copper IUDs (45%) and Ella (42%) as forms of emergency contraception (Figure 1); 38% provided neither, 26% provided both methods, 17% provided the copper IUD only and 15% provided Ella only (Figure 3). 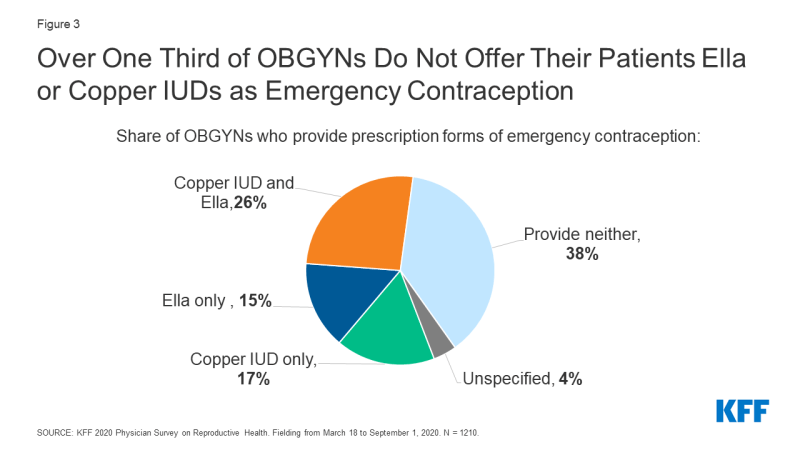 Figure 3: Over One Third of OBGYNs Do Not Offer Their Patients Ella or Copper IUDs as Emergency Contraception

Considerations for LARCs and injectables

Beyond insurance hurdles, practices may not offer same-day LARC insertion if they do not have the contraceptive methods stocked onsite. Among those that provide IUDs, four in five (79%) stock IUDs onsite; nearly three in four implant providers (73%) stock implants onsite; and about half (51%) of OBGYNs who provide injectables stock them on site. Stocking these contraceptive methods onsite was more common among OBGYNs in health centers/clinics than private office-based practices, in large and medium size practices rather than small, and among OBGYNs who provide all methods of contraception compared to those who do not (Table 5).

Under the Trump Administration, there was increased federal support for and attention to fertility awareness-based methods (FABM) of contraception – that is tracking ovulation. This includes instruction on monitoring basal body temperature, cervical mucus, hormone production, cervical position, and calendar tracking. For patients seeking contraceptive services, most OBGYNs reported that a minority of patients request information on FABM. More than three fourths (78%) of OBGYNs said less than a quarter of patients requested this information (Figure 4). 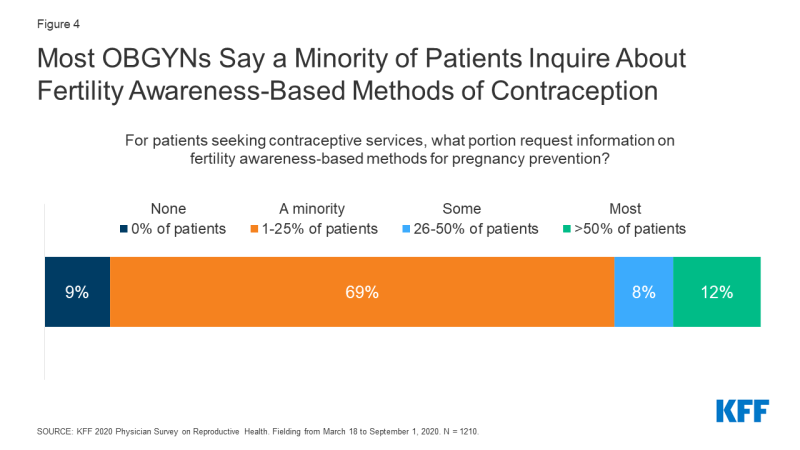 Figure 4: Most OBGYNs Say a Minority of Patients Inquire About Fertility Awareness-Based Methods of Contraception

One in five OBGYNs said their practice provides medication abortions (20%) and aspiration abortions (19%), but the majority of OBGYNs did not provide abortions for pregnancy termination in their practices. Nearly two-thirds referred patients to outside providers for these services, and a minority neither provided nor referred for these services (Figure 5). These data are fairly consistent with prior estimates of abortion provision in the U.S. (Stulberg et al. 2012, Grossman et al. 2019). 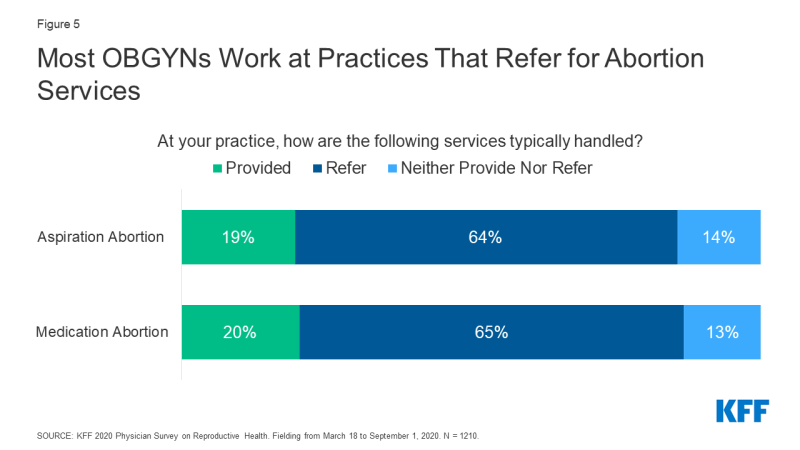 Figure 5: Most OBGYNs Work at Practices That Refer for Abortion Services 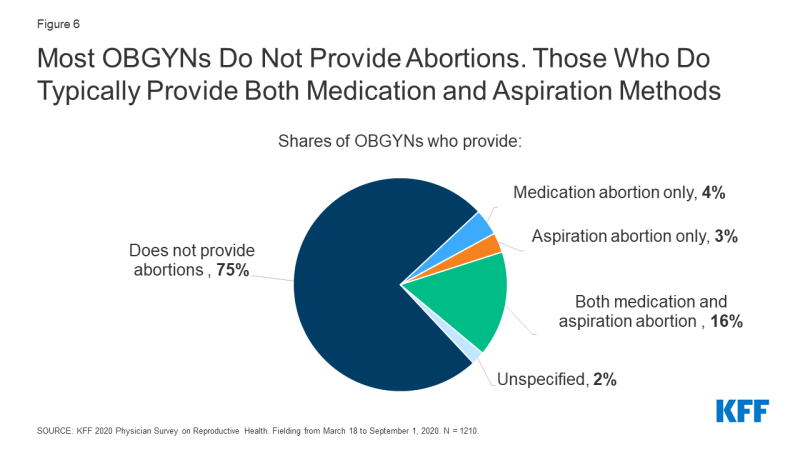 Figure 6: Most OBGYNs Do Not Provide Abortions. Those Who Do Typically Provide Both Medication and Aspiration Methods

Characteristics of OBGYNs who provide abortions

The provision of abortion services varied by region and urbanicity. A larger percentage of OBGYNs in urban and suburban locations than those in rural locations provided medication and aspiration abortions, while a larger share of OBGYNs in the Northeast and West reported providing both types of abortions compared to OBGYNs in the Midwest and South (Figure 7). Similar trends by urbanicity and region were found by Stulberg et al. in their 2008 survey of U.S. OBGYNs. 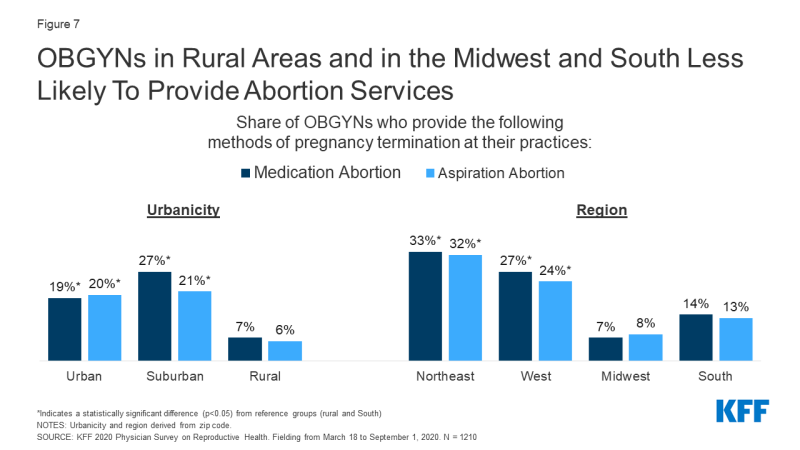 Figure 7: OBGYNs in Rural Areas and in the Midwest and South Less Likely to Provide Abortion Services 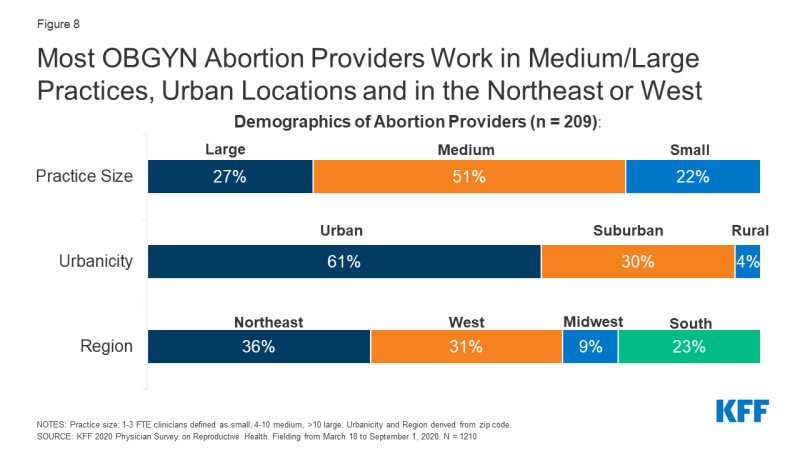 Figure 8: Most OBGYN Abortion Providers Work in Medium/Large Practices, Urban Locations and in the Northeast or West

When looking at practice type, the share of OBGYNs who provided medication and aspiration abortions did not differ between health centers/clinics and private office-based practices (Table 6). However, a smaller share of those in health centers/clinics referred for both medication (51% vs. 66%) and aspiration abortions (51% vs. 66%) compared to those in private office-based practice; for health centers/clinics participating in the Title X Family Planning program, fewer referrals may be due to changes to the program regulations which did not permit Title X recipients to refer patients for abortions at the time the survey was fielded.

Compared to OBGYNs who do not provide abortions, a larger percentage of those who offered abortions provided a choice of all methods of contraception including emergency contraception, and provided same-day IUD and implant placement; this is notable given post-abortion contraception is an important component of abortion care for some women. A higher share of abortion providers also provided a wide range of STI services compared to non-abortion providers, including prescription of PrEP for HIV prevention and prescription of expedited partner therapy (EPT). It was also more common for abortion providers to provide gender affirming care compared to OBGYNs who did not provide abortions at their practice (Figure 9). 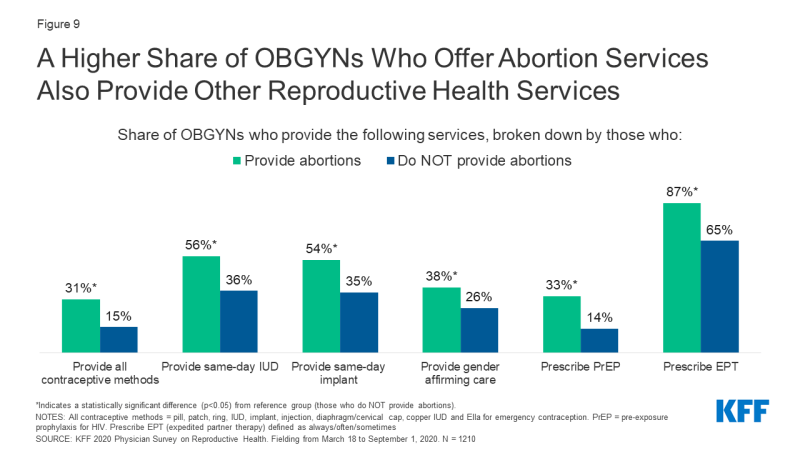 characteristics of OBGYNs who DO NOT provide Abortions 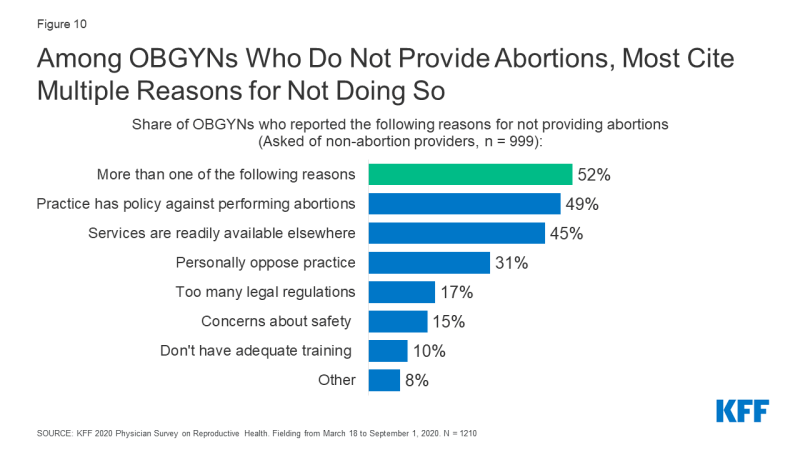 Figure 10: Among OBGYNs Who Do Not Provide Abortions, Most Cite Multiple Reasons for Not Doing So

Only 10% reported they did not have adequate training to be providing this service, however this number was higher among the youngest group of physicians, age <45, compared to all older groups (age <45: 20%, 45-54: 7%, 55-64: 3%, 65+: 3%). This may reflect changes to abortion training over time. In 1996, the accrediting organization for OBGYN, the ACGME, instituted a training requirement for OBGYN residency programs to provide training in abortion provision, with opt out options for those with religious or moral objections. In a 2002 study of U.S. OBGYNs, it was found that younger OBGYNs were more likely than older OBGYNs to provide abortion, which was attributed to this change in medical training. However, a study by the National Academies of Sciences, Engineering and Medicine pointed out that not all residency programs follow the ACGME requirement, and that abortion training may have become more limited in recent years due to institutional policies, state laws, and mergers with religiously-affiliated hospitals.

Among those who do not provide abortions, more male OBGYNs personally oppose the practice than female (39 vs. 27%). Additionally, among those who do not provide abortions, 61% of OBGYNs in health centers/clinics say their practice has a policy against performing abortions compared to 47% in private office-based practice; this could reflect federal and state level restrictions on the use of public funds for the provision of or referral for abortion found in the federal Title X program, the Hyde amendment and state laws. 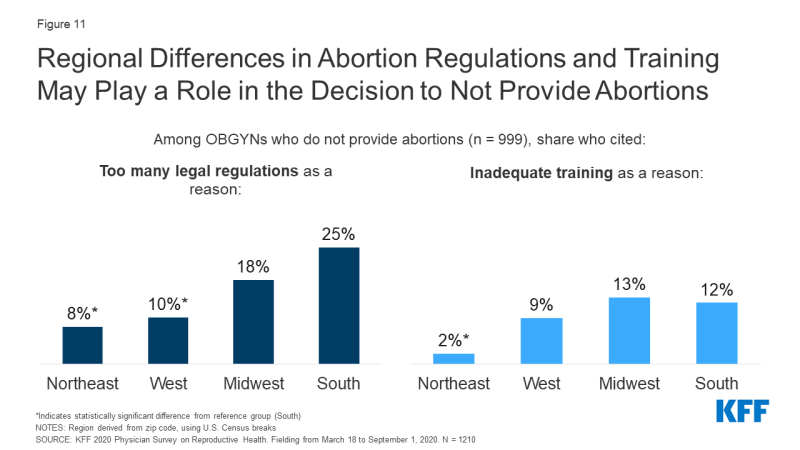 Figure 11: Regional Differences in Abortion Regulations and Training May Play a Role in the Decision to Not Provide Abortions

Most OBGYNs who did not provide abortions, however, referred patients for these services (Figure 5). A small share of OBGYNs (13%) neither provided abortions nor referrals for patients to obtain abortions at another practice or clinic. This was more common among OBGYNs who are male compared to female, and work in practices in the South and Midwest compared to the West and Northeast (Figure 12). No differences were identified by age, practice type, practice size or urbanicity. 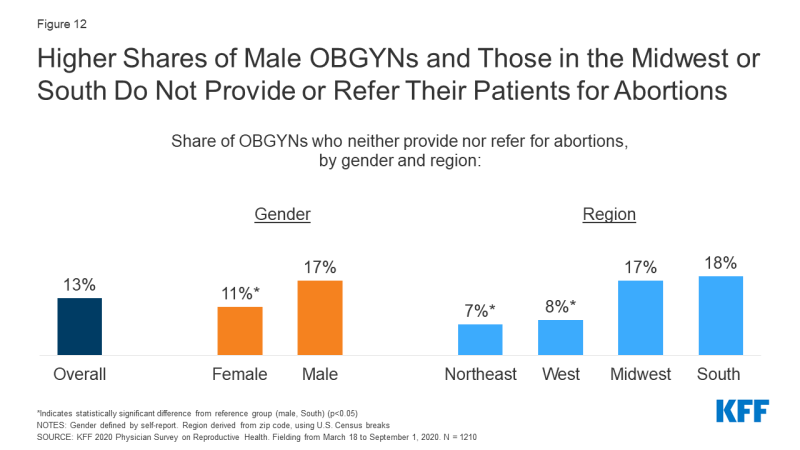 Figure 12: Higher Share of Male OBGYNs and Those in the Midwest or South Do Not Provide or Refer Their Patients for Abortions

Other Sexual and Reproductive Health Services

The United States Preventive Services Task Force (USPSTF) recommends testing for gonorrhea, chlamydia, HIV and syphilis at differing points in people’s lives. The vast majority of OBGYNs provide onsite testing at their practice for gonorrhea and chlamydia (99%), syphilis (90%) and HIV (87%) (Table 7). About a third have onsite have lab processing as well for these STIs (38%/34%/34% respectively), rather than sending samples to outside labs.

While testing for gonorrhea and chlamydia was near universal, a small share of OBGYNs did not provide onsite testing for syphilis (9%) or HIV (12%) (typically collected via blood draws), meaning a patient would need to visit a separate facility for testing. This is important to note given the rising rates of congenital syphilis, primary and secondary syphilis among women, and HIV among certain groups of women in recent years. A higher share of OBGYNs in private office-based practices compared to health centers/clinics, and in small practices compared to medium and large did not test offer onsite testing for syphilis and HIV (Figure 13). 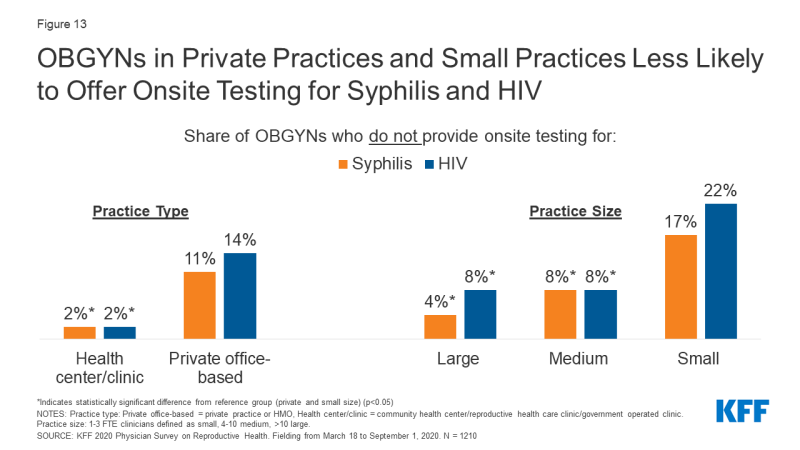 According to the CDC, there remains a substantial gap, particularly among women, between the number of people with indications to be on the HIV prevention medication known as PrEP, and those who have been prescribed this medication. This may be in part due to a limited number of providers who prescribe PrEP. In our sample of OBGYNs, fewer than one in five (18%) prescribe PrEP for the prevention of HIV. This varied some by physician and practice characteristics; PrEP prescription was more common among younger OBGYNs ages compared to older, and among those in large practices compared to medium and small (Figure 14). 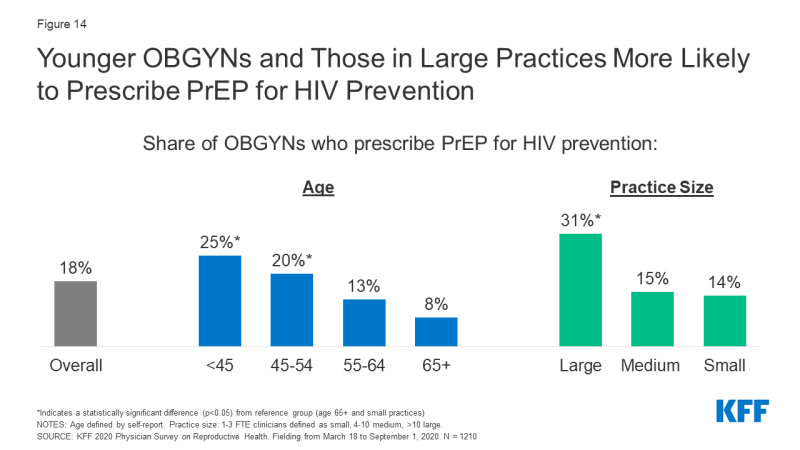 Figure 14: Younger OBGYNs and Those in Large Practices More Likely to Prescribe PrEP for HIV Prevention

OBGYNs varied in how often they prescribed expedited partner therapy (EPT) for sex partners of patients being treated for gonorrhea or chlamydia. EPT describes the practice of prescribing STI treatment for a patient’s sex partner(s) without an in-person medical evaluation of their partner(s). About half of OBGYNs said they always (33%) or often (21%) prescribe EPT for gonorrhea and chlamydia, while some said they do so sometimes (15%). Nearly third said that they rarely (15%) or never (15%) prescribe EPT (Figure 15). 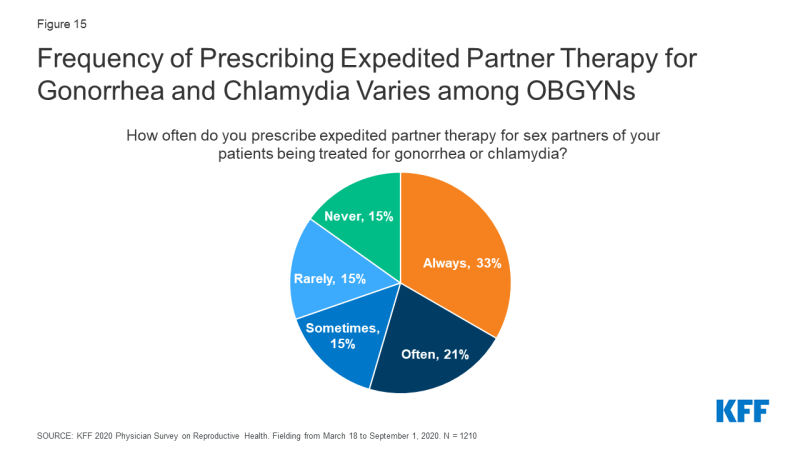 Beyond contraception, STIs and abortion care, OBGYNs reported providing a range of other sexual and reproductive health services within their practices, while a small percentage refer their patients to other providers for these services (Table 8). Almost all OBGYNs reported they provide pap smears and human papillomavirus (HPV) testing (98%), colposcopies for abnormal pap smears (96%), basic infertility diagnostic services (90%) and prenatal care for low risk pregnancies (88%) within their practices, however some notable differences in service provision emerged. For example, fewer OBGYNs in health centers/clinics provided basic infertility diagnostics (e.g., lab testing, pelvic ultrasound, semen analysis) as compared to those in private office-based practices (78% vs. 92%). Additionally, provision of prenatal care was less common among older doctors (age 65+) compared to younger doctors, and those in small practices compared to medium or large (Table 9). 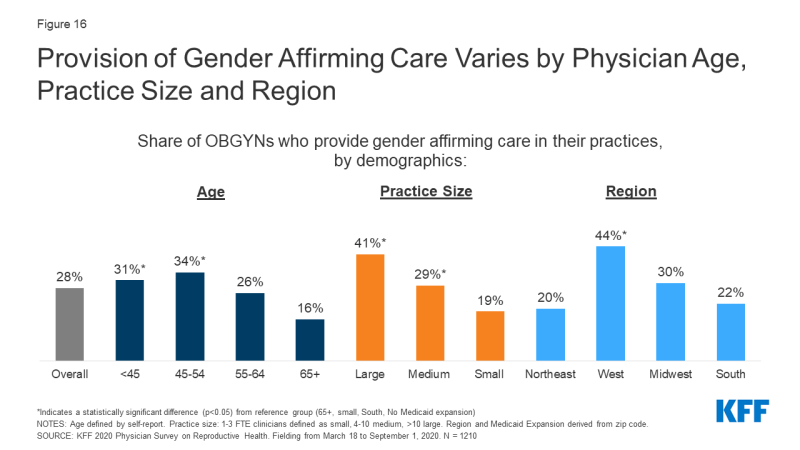 Providers varied in how prepared they felt to meet the sexual and reproductive health care needs of sexual and gender minority patients. Nearly nine in ten (88%) OBGYNs said they were very or somewhat prepared to meet the SRH needs of lesbian, gay, bisexual and queer patients, while the same was true for only 56% of OBGYNs when it came to transgender patients (Figure 17). 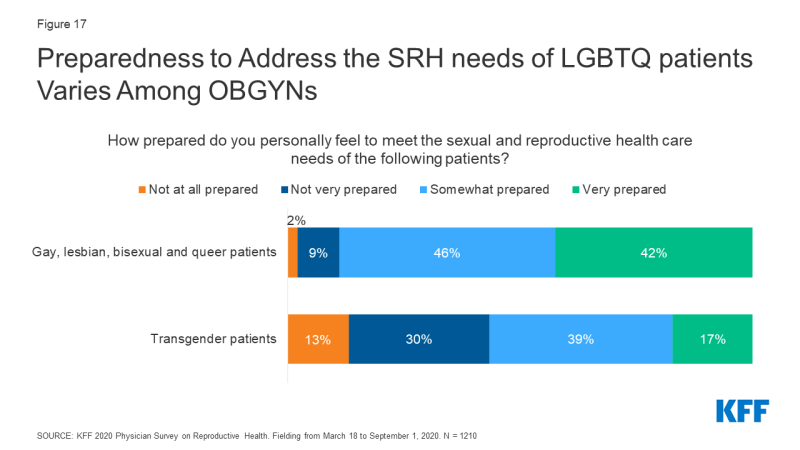 Figure 17: Preparedness to Address the SRH needs of LGBTQ patients Varies Among OBGYNs

In recent years, emphasis has been placed on incorporating screening for the social determinants of health and mental health needs into routine clinical care. We asked OBGYNs about their screening and intervention practices for four psychosocial needs—intimate partner violence (IPV), depression, housing and transportation. Nearly all OBGYNs screened patients for IPV and depression. A very small share of OBGYNs reported they do not screen any of their patients for IPV (4%) or depression (2%). This is perhaps not surprising given there are formal recommendations from USPSTF and ACOG to screen for both IPV and depression.

For social needs without formal screening recommendations however, screening was more variable. Almost half of OBGYNs said that they do not screen any of their patients for unmet housing needs (47%) or transportation barriers (45%) (Figure 18). 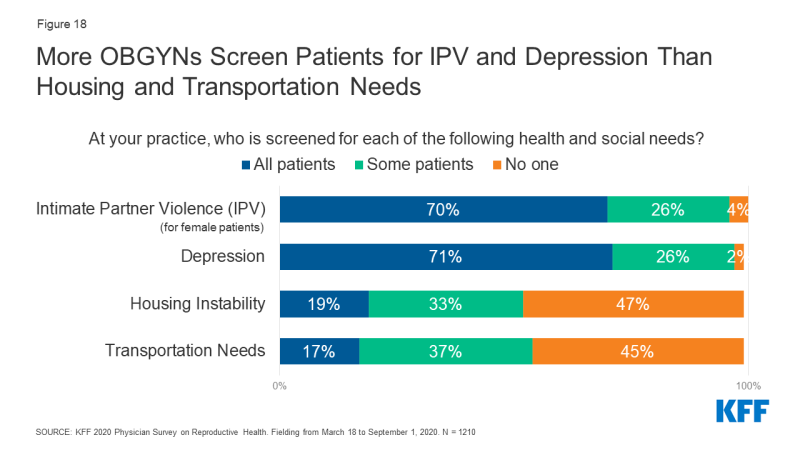 In the event a patient discloses or screens positive for one of these needs, most OBGYNs referred patients to outside resources for IPV (75%), depression (66%), housing (55%) and transportation (53%). Few had resources or a social worker onsite to address these needs (Figure 19). More than one in four OBGYNs (27%) said they neither have internal resources nor refer to external resources if a patient screens positive for unmet housing or transportation needs. 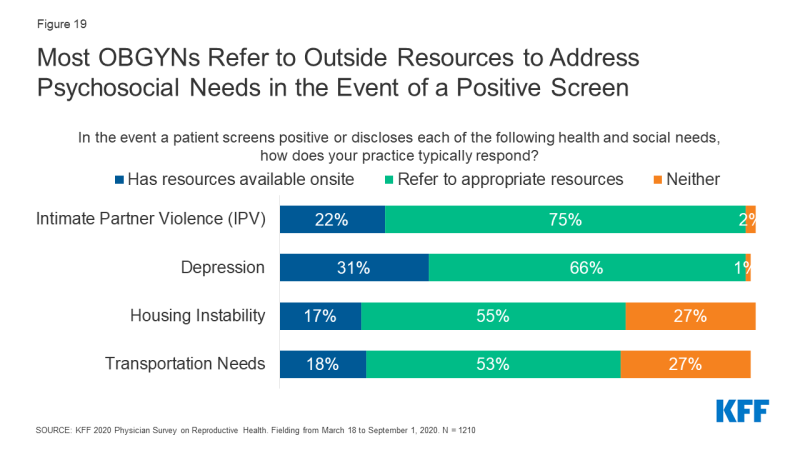 Figure 19: Most OBGYNs Refer to Outside Resources to Address Psychosocial Needs in the Event of a Positive Screen