On March 4, 2019, the Trump Administration issued new regulations that makes significant changes to Title X, the federal family planning grant program. The new regulations effectively block the availability of Title X grants to family planning clinics that offer abortion services with other funds, curtail counseling, ban Title X projects from making referrals to abortion services, and require all pregnant patients served by Title X clinics to be referred for prenatal services, regardless of their pregnancy intention. Shortly after the regulations were finalized, the attorneys general from 23 states, major family planning organizations and the American Medical Association filed legal challenges in federal courts to block the implementation of the final Title X regulations.

Although the district courts in Washington, Oregon, California and Maryland initially issued preliminary injunctions blocking the implementation of the new regulations, the Courts of Appeals have blocked these preliminary injunctions, and the regulations are currently in effect pending the outcome of the litigation. The Trump Administration Title X regulations are similar to rules issued by the Reagan Administration that were also challenged by provider groups, but were ultimately upheld in 1991 by the Supreme Court in Rust v Sullivan. Ultimately, one or more of these cases may be appealed to the Supreme Court, to decide whether the Trump Administration regulations violate the federal statutes or the Constitution or are within their agency rights. This brief provides an overview of the legal challenges to the Trump Administration final regulations and summarizes the key positions of the plaintiffs and HHS.

What provisions of the final regulations are being challenged?

On March 4, 2019, new final regulations for Title X grants were published in the Federal Register. The Office of Population Affairs, the federal agency that administers the program announced that the regulations would become effective on July 15, 2019 with a full phase in on March 4, 2020. The regulations make many changes to the requirements for Title X projects that are already reshaping the program and provider network available to low-income people through Title X.

Who is challenging the Trump Administration regulations? 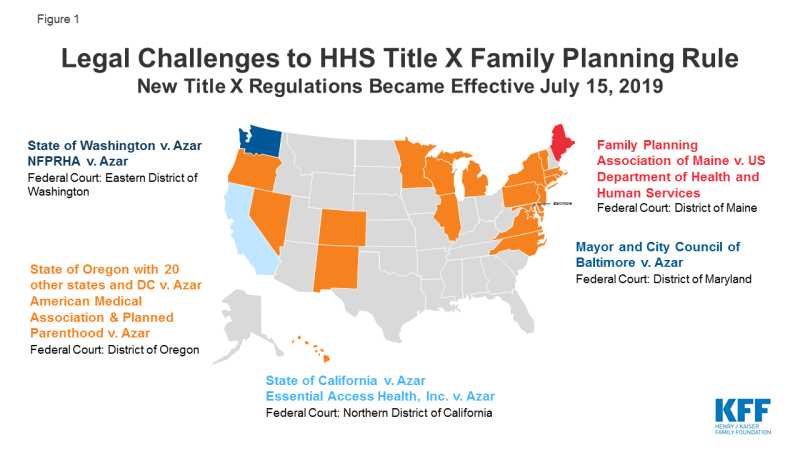 The plaintiffs in these lawsuits are challenging these regulations claiming that they would harm the four million low-income people who receive family planning services from Title X sites, would reduce the network of Title X sites, ban providing full medical information and referrals, and potentially decrease the provision of effective medically appropriate contraceptive services. In addition, the rules will create a financial strain on grantees and states that can longer accept the Title X funds, and potentially impact public health.

On what grounds are the plaintiffs suing the federal government?

The heart of the litigation is Section 1008 of Title X, which states that no federal funds appropriated under this program “shall be used in programs were abortion is a method of family planning.”

While the plaintiffs are claiming numerous violations of federal process and law, the interpretation of Section 1008 of the Title X statute is at the heart of this litigation. Section 1008 of specifies that no federal funds appropriated under the program “shall be used in programs where abortion is a method of family planning.” HHS has changed its interpretation of this provision over time, but throughout most of the history of the program, the ban has generally been understood to mean that Title X funds cannot be used to pay for or support abortion, as was the policy under the regulations in place before the Trump Administration issued new regulations. At that time, the program required that all clinics that also offered abortion services financially separate their operations but did not have a full physical separation requirement.

In Rust v Sullivan, the Supreme Court ruled that the government may favor childbirth over abortion and is within its rights to allocate funds consistent with this viewpoint—without violating a woman’s right to choose to terminate her pregnancy. After the Supreme Court’s decision, Congress voted to repeal the prohibitions on counseling and referring for abortion, but lacked the votes to override President George H.W. Bush’s veto.

The Reagan era regulations, however, were never fully implemented. The Clinton Administration issued regulations that have been in effect ever since, permitting Title X providers to refer for abortions and allow sites that also provide abortion services to participate in Title X, so long as there is financial separation between the Title X funds and funds used for abortion services.

The plaintiffs contend that the Administration violated the Administrative Procedures Act by not stating a valid reason for the rule or following proper notice and comment procedures. While Rust v. Sullivan held that the regulations were one acceptable interpretation of Section 1008 at that time, the plaintiffs argue that the applicable law has changed. Every year since 1996 (after Rust), Congress has passed an Appropriations Act for Title X requiring that all pregnancy counseling be nondirective. In particular, the plaintiffs contend that the requirement to refer all pregnant patients to pre-natal services and the ban on abortion referrals is violation of this section which requires all pregnancy counseling to be nondirective.

In addition, they are claiming that HHS has violated Section 1554 of the ACA (Box 2), which states that the agency shall not promulgate any regulations that creates any unreasonable barriers to the ability of individuals to obtain appropriate medical care or restricts communications between a doctor and a patient. They charge that these regulations create barriers to care by requiring physical and financial separation for clinics that provide abortion services with non-Title X funds, only permitting doctors and advanced practice providers to provide counseling, and requiring additional documentation for minors. They also claim that the regulations restrict the speech of doctors who work at Title X clinics by banning referrals to abortion services, and requiring referrals to pre-natal service even if that is not what the patient seeks.

All of the lawsuits challenging the Title X final rule are based on similar legal arguments. Listed below are some of the common claims.

Grantees were required to submit action plans to show compliance with the new regulations on August 19, 2019, and a certificate of compliance on September 19, 2019. Some of the nonprofits and states (IL, ME, OR, WA) challenging the regulations have decided to withdraw from Title X or put a hold on drawing down funds as the cases move through the federal district courts. In addition, Planned Parenthood, also a litigant in the cases, formally withdrew from the program. In addition to the 400 Parenthood sites, over 600 additional clinics, composed of state health departments, federally qualified health centers, and nonprofit organizations are no longer using Title X funds to support services for low-income and uninsured individuals. These decisions affect all of the Title X clinics in Hawaii, Maine, Oregon, Utah, Vermont, and Washington and the majority of Title X clinics in Alaska, Connecticut, Illinois, Maryland, Massachusetts, Minnesota, New Hampshire and New York.

The new regulations are currently in effect and the plaintiffs are awaiting the rulings from the 9th Circuit and 4th Circuit Court of Appeals regarding whether the regulations can be blocked until the cases make their way through the federal district courts. On March 4, 2020, Title X sites are required to physically separate the abortion services they provide with non-Title X funds. If this part of the regulations is implemented as scheduled in March 2020, it is expected that many more Title X grantees and sites will withdraw from the Title X network. While Supreme Court may eventually hear these cases, the 2020 presidential election may take place before these cases reach the Supreme Court.