For the most part, longer-term New Orleans residents think that these newcomers have been good for New Orleans (52 percent), while a third (33 percent) say they haven’t made much difference and just one in ten (11 percent) say they have been bad for the city. Among longer-term residents, whites overwhelmingly see the newcomers as having a positive impact on the area (77 percent), while African Americans are more divided between saying they have been good for the city (39 percent) and haven’t made much difference (45 percent). 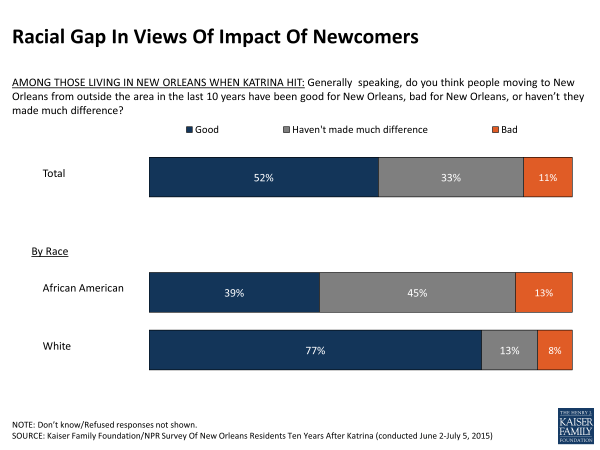 Regardless of their feelings about newcomers, New Orleanians’ reputation for being friendly and welcoming extends to all comers. Eight in ten residents overall (79 percent), including 81 percent of those who are newer to the city, say that the people who’ve lived in New Orleans since before Katrina are generally accepting of people who moved to the area more recently. 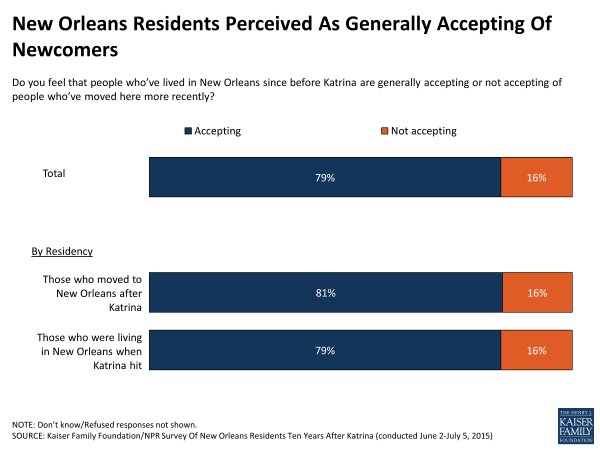 Among all current New Orleans residents, almost three in ten (28 percent) say they are currently planning to move away from the area or are seriously considering it, up slightly from 24 percent of residents who said the same five years ago. About twice as many African Americans as whites say this is their intention (35 percent, compared to 17 percent). The intention to move is mainly driven by those under age 30, 47 percent of whom say they are planning to leave (up from 37 percent of 18-29 year-olds in 2010).

Of those who say they are planning to move, most cite job opportunities elsewhere and the desire to live in a community with different services and opportunities as their main reasons (each reason accounts for about a quarter of those who are planning to move, or 8 percent of all residents). Others name crime (4 percent of all residents), educational opportunities (2 percent), and the desire to experience other places (2 percent) as their primary reason for wanting to leave. 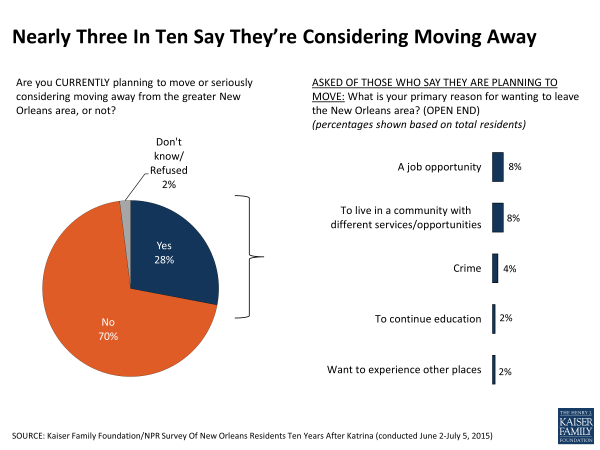