The sense that New Orleans’ African American residents have been left behind by the recovery efforts may be exacerbated by the fact that these residents were living substantially different economic realities from their white counterparts long before Hurricane Katrina hit, and continue to do so today. A recent report found that the median household income for African Americans in New Orleans was 54 percent lower than for area whites, and 20 percent lower than for African Americans nationwide. Similarly, while employment rates for white men in New Orleans were on par with other fast-growing Southern metro areas, the employment rate for black men – at 57 percent in 2013 – lagged behind similar cities.1 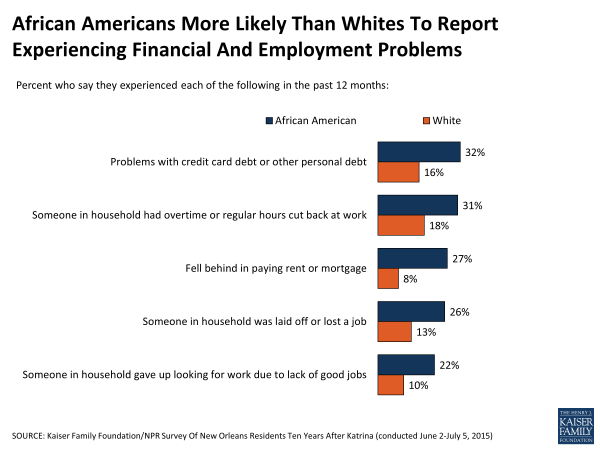 Uneven Progress In Perceptions Of Recovery

African Americans are also more likely than whites to think that if Hurricane Katrina were to hit the Gulf Coast today, the levees would be breached again (41 percent, compared to 28 percent). This concern may reflect the fact that African Americans are more likely to live in neighborhoods that are at the highest risk for flooding if another big storm hits, including New Orleans East, Gentilly, and Algiers. 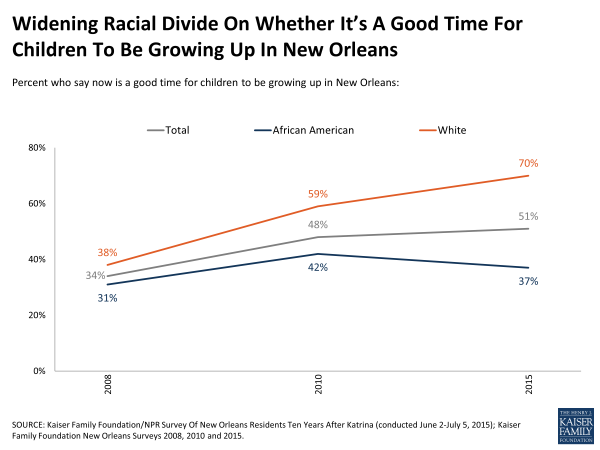 Similarly, while the share of residents overall who say New Orleans provides excellent or good career opportunities for young people has increased over time, this trend is driven mainly by the increasingly positive views of whites. Two-thirds (66 percent) of whites now hold this view, up 29 percentage points since 2008, while just 35 percent of African Americans agree, about the same proportion who felt this way 7 years ago. 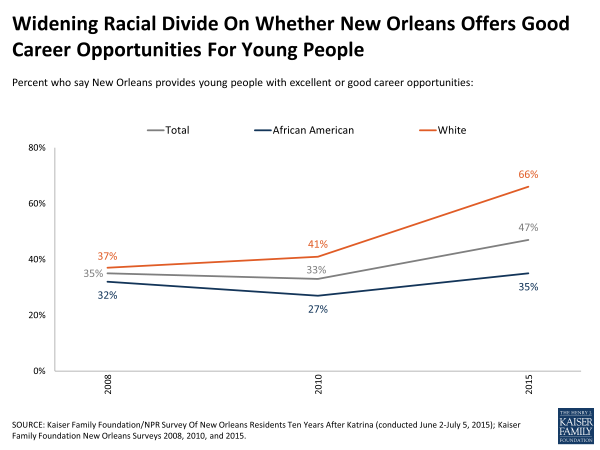 Despite these widening racial gaps in attitudes and continuing economic disparities, and despite the fact that other polls have found a recent worsening in perceptions of race relations nationally2, a majority (56 percent) of residents who’ve lived in New Orleans since before the storm say race relations in the city are about the same as they were pre-Katrina. This view is held by a majority of both African Americans and whites. However, for those who see a change in race relations, whites are more likely to say things are better today than before the storm (27 percent better versus 13 percent worse), while Africans Americans are more divided (19 percent better, 23 percent worse). 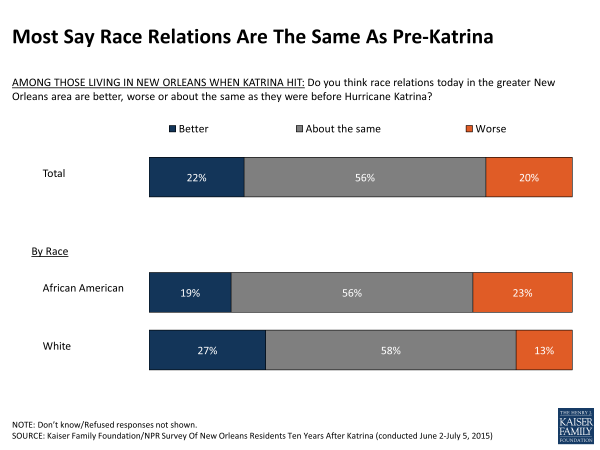