Changes In Quality Of Life Since Katrina

Overall, about half (49 percent) of those who were living in New Orleans at the time Katrina hit say their own quality of life is about the same as it was before the storm, while 30 percent say it is better and 20 percent say it’s worse. Of those who report a change, African Americans are split between saying their quality of life is better and worse (26 percent and 23 percent, respectively), while more whites say things have gotten better than say things have gotten worse (38 percent and 10 percent). 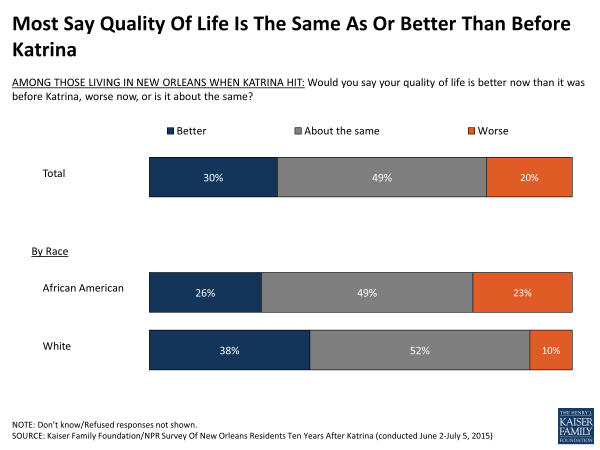 Similarly, half (50 percent) of those living in New Orleans when Katrina hit say their personal support network of relatives and friends is about the same as it was before the storm, while 31 percent say it’s better and 19 percent say it’s worse. African Americans whose residency pre-dates Katrina are somewhat more likely than whites to say their support network has gotten worse (24 percent versus 10 percent), and also more likely to say someone close to them died as a result of the storm (36 percent of African Americans versus 19 percent of whites).

While most report a similar or improved quality of life, some residents who lived in New Orleans during Katrina report lingering mental health effects from their experience with the storm. Two in ten (21 percent) say they have had a serious problem with sleep loss in the past few years that is at least partially attributable to their experiences with Katrina. Smaller shares say they have had serious problems with controlling their temper (12 percent), strains in their marriage (11 percent), and alcohol or drug use (4 percent) and attribute these problems to their experiences during and after the storm. 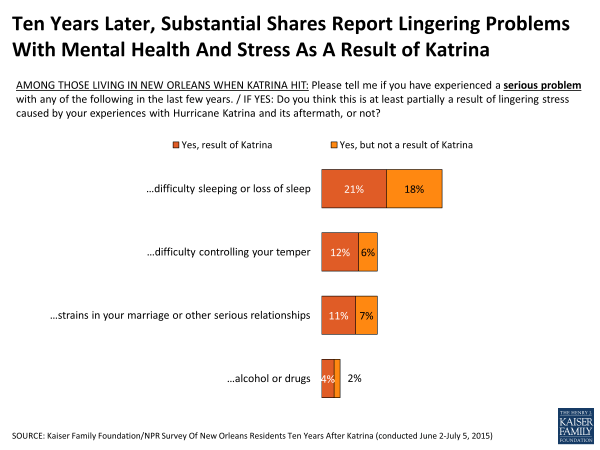 Despite these lingering problems for some, most of those who lived through Katrina and remain in New Orleans say the experience made them more resilient rather than less. Roughly three-quarters (74 percent) of residents who were living in New Orleans at the time of the storm say they are better able to cope with stress as a result, while one in five (19 percent) say the experience made them less able to cope. Perhaps reflecting other disparities noted in this report, African Americans are about twice as likely as whites to say their experiences with the storm made them less able to cope with stress (23 percent versus 11 percent).

It is worth noting that this survey can only represent the views of the city’s current residents, meaning those New Orleanians who remain or have returned to the city 10 years after the storm. If this question were asked of those who were displaced and have not been able to return, it’s quite possible a different picture of the impact of Katrina on people’s ability to cope might emerge. 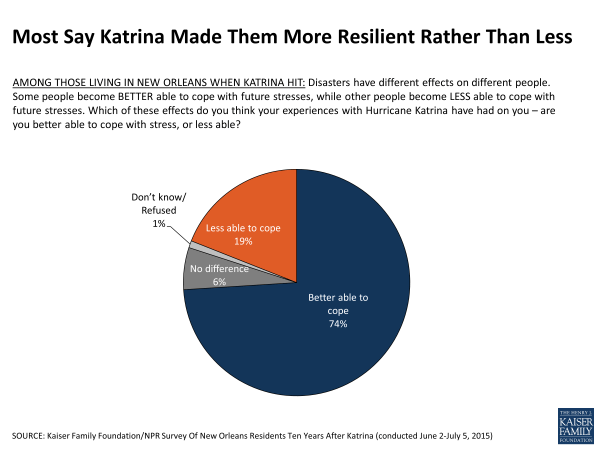 For the most part, residents’ assessments of their own mental health status and how well their mental health needs are being met are similar regardless of whether they lived through Katrina in New Orleans or moved there more recently, and are also similar to adults nationwide. About two-thirds (68 percent) of residents say their mental health is excellent or very good, similar to the share of adults nationally who said so in a Kaiser Family Foundation survey (70 percent).1 Seventeen percent – including equal shares of those living in New Orleans when Katrina hit and those who moved there after the storm – say they have taken medication for their emotions, nerves, or mental health in the past 6 months, similar to the 15 percent of adults nationally who reported doing so.2 And overall, the vast majority of residents (84 percent) say their mental health needs are being met “very” or “somewhat” well, again similar to 87 percent in the same national survey.