New Orleans Remains Optimistic And Proud Of Its Culture

True to the city’s reputation, the people of New Orleans maintain a remarkably positive attitude. Nearly eight in ten residents (78 percent) say they are optimistic about the future of the greater New Orleans area, a share that has been high since Katrina hit, but has increased somewhat since 2006 (70 percent). Optimism is the prevailing view across all groups of residents, including African Americans (75 percent) and whites (85 percent), and those with lower and higher incomes (75 percent of those with incomes below 200 percent of the federal level and 82 percent of those with higher incomes). 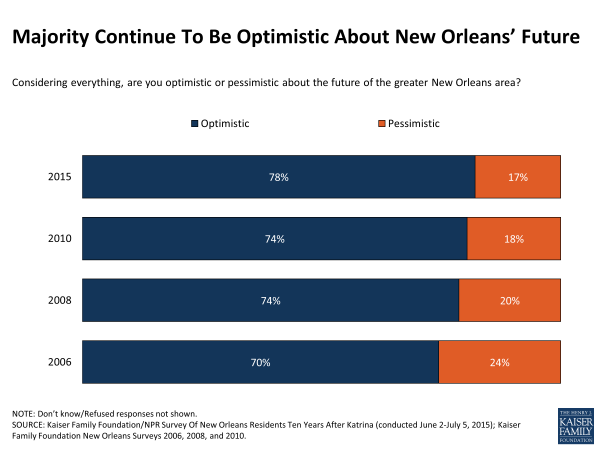 Residents are also unshaken in their pride for their city’s culture. As was the case in 2010, culture – including food, music, and nightlife – tops the list of responses to an open-ended question about the best thing that New Orleans has to offer (53 percent), followed by other factors such as tourism (13 percent) and the people (7 percent). 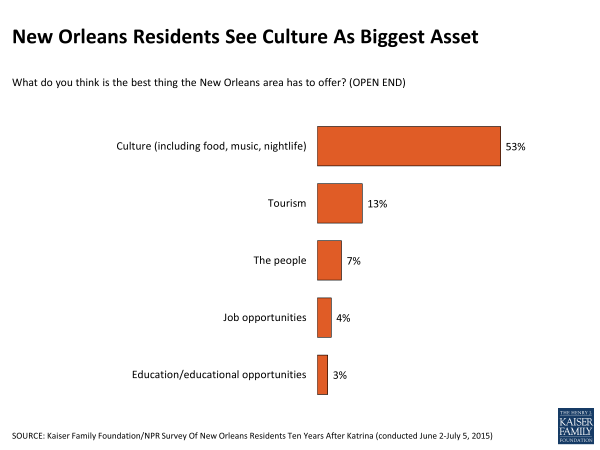 Most Say Recovery Is Going In Right Direction

New Orleanians also take a generally positive view of the city’s efforts to recover from Hurricane Katrina. Nearly three-quarters (73 percent) now say the recovery and rebuilding effort is going in the right direction, similar to the share who said the same in 2010, but higher than the shares in 2006 and 2008. In fact, a majority of residents (54 percent) now say the city has mostly recovered from Hurricane Katrina, an increase from about four in ten (39 percent) who said the same five years ago. 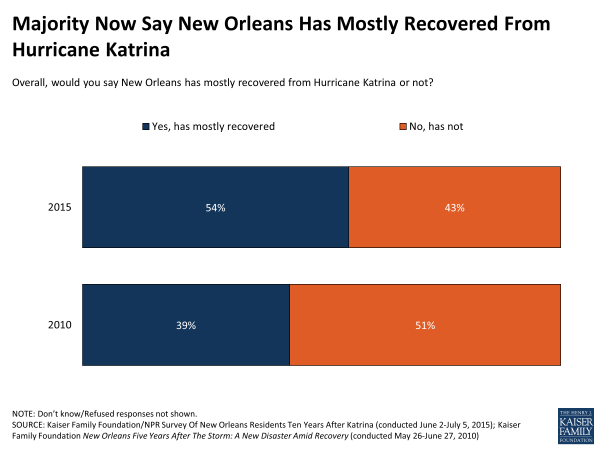 The people of New Orleans are quick to acknowledge the efforts made by many groups and organizations that have bolstered the rebuilding efforts.  Large majorities say that charities and religious organizations (83 percent), local businesses (79 percent), and the federal and local governments (70 percent and 66 percent, respectively) have been at least somewhat helpful in city’s recovery. Fewer (46 percent) say the Louisiana state government has been helpful, perhaps reflecting New Orleans’ mainly Democratic allegiance in a state whose government is led by Republicans. 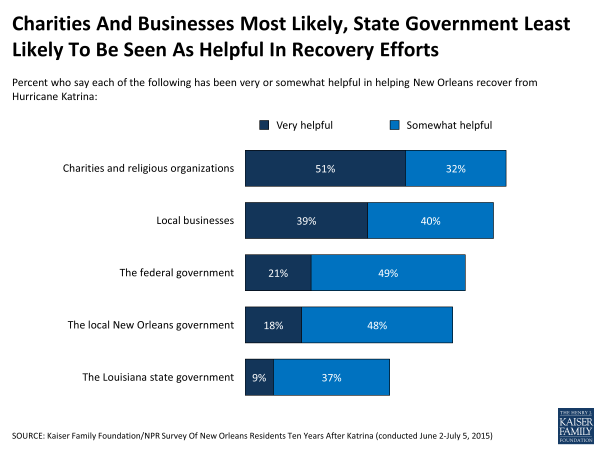 Who Has The Recovery Effort Helped Most?

Although most New Orleanians think the recovery effort is on the right track, many also believe that some have reaped the benefits more than others. Over four in ten say that the efforts to rebuild New Orleans have done “a lot” to help wealthy people (43 percent) and whites (42 percent), while smaller shares say the efforts have done “a lot” to help Hispanics (28 percent), African Americans (21 percent), middle class people (19 percent) and poor people (17 percent). 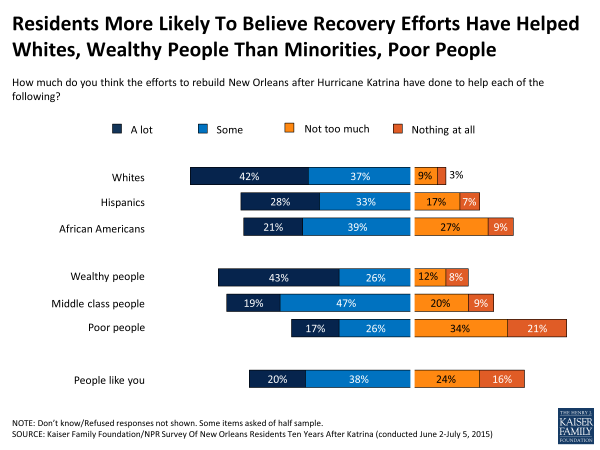 These results hold true at the personal level, where African Americans and those with lower incomes are more likely to feel left behind by the recovery efforts. About half of African Americans (47 percent) and those with incomes below 200 percent of the federal poverty level (46 percent) say that the recovery efforts have not done much, if anything at all, to help “people like you.” In contrast, about two-thirds of whites (67 percent) and those with higher incomes (66 percent) say the efforts have helped people like them “a lot” or “some.”