Premiums are the most visible and the easiest factor for beneficiaries to compare across plans. While other factors, such as limits on out-of-pocket spending, cost-sharing, prescription drugs, extra benefits, and provider networks, can have an even larger impact on beneficiaries’ out-of-pocket spending on health care and access to providers, information on them is less readily accessible and often more difficult to interpret. For cost-sharing and provider networks in particular, it is nearly impossible from publicly available data to construct an apples-to-apples comparison across plans that appropriately weights all factors. As a result, many people use the plan premiums to choose among plans.

To examine how premiums for all plans available to beneficiaries will change between 2015 and 2016, this spotlight first examines the change in premiums for all MA-PDs, without weighting them by the number of enrollees in each plan. The analysis includes plans with no premiums as well as plans with monthly premiums. In 2016, the average premium for MA-PDs (unweighted by plan enrollment) will be $53 per month – similar to 2015 (Table A3). Premiums for HMOs will average $39 per month, up $1 from 2015. Similar to prior years, HMOs will continue to have lower premiums than regional PPOs ($75 per month), local PPOs ($79 per month) and PFFS plans ($91 per month). Similar to 2015, regional PPOs will have the largest change in premiums, on average, and average premiums will increase $7, on average, from $68 per month in 2015. In contrast, premiums for local PPOs will decrease by $2, on average, from $81 per month in 2015.

Based on plan enrollment in the Fall of 2015, the average Medicare Advantage enrollee in a plan that will continue to be offered in 2016 will pay about $41 per month, an increase of $3 per month (or 8%) compared to 2015, if they stay in the same plan (Figure 5). In percentage terms, enrollees in PFFS plans will experience a larger increase in premiums (13% on average) than enrollees in other types of Medicare Advantage plans, and average premiums for PFFS plan enrollees will rise from $52 per month to $58 per month, assuming no change in enrollment. The average increase in enrollment weighted premiums is lower than it has been since 2012 when there was a 3 percent increase. Premiums could be rising at a somewhat slower pace for many reasons including the fact that the changes in payments to plans as a result of the ACA are fully implemented in most counties. Monthly premiums, weighted for 2015 enrollment will be lower for enrollees in HMOs ($31 per month) than for enrollees in other types of Medicare Advantage plans, and higher for enrollees in local PPOs ($68 per month), on average. 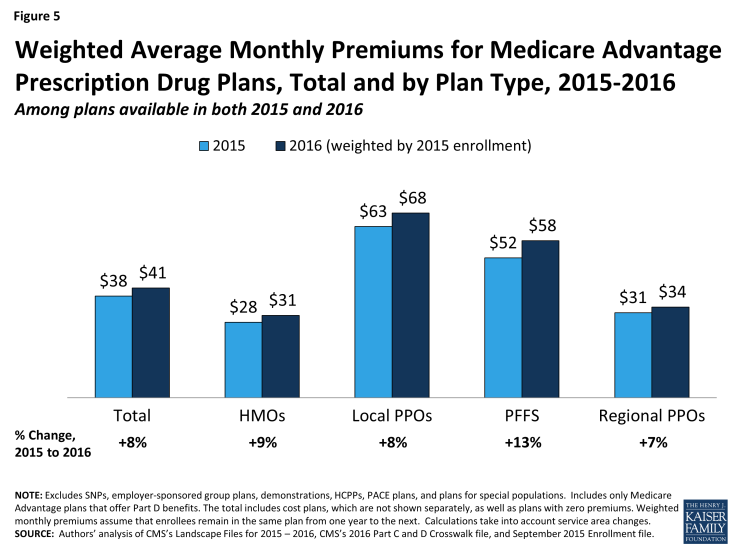 In general, enrollees in MA-PDs that will continue to be offered in 2016 had somewhat lower premiums in 2015, on average, than enrollees in plans that will be exiting the Medicare Advantage market in 2016 (Table A1). The 2015 premiums for plans remaining in the market in 2016 averaged $38 per month as compared to $41 per month for those exiting the market. However, the difference varies across plan types and these changes are difficult to interpret because plan premiums are a function of many plan-specific factors (e.g., benefits, cost-sharing, provider networks), as well regional-specific factors (e.g., local practice patterns, payments from the Medicare program). 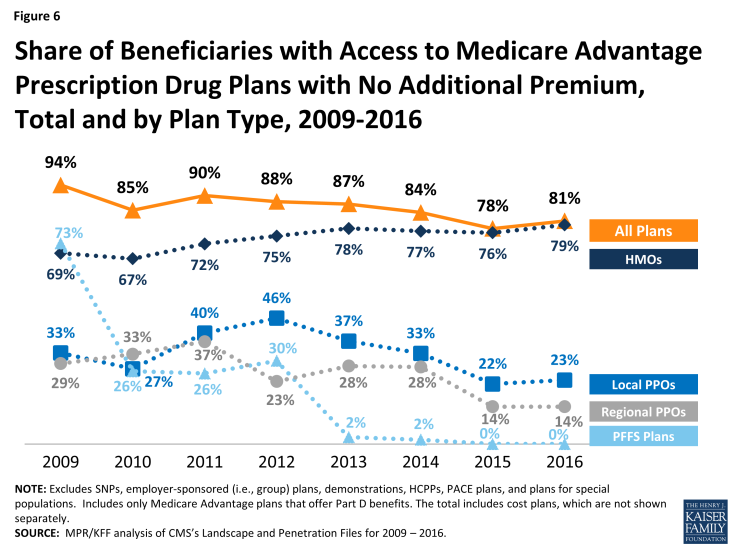 Figure 6: Share of Beneficiaries with Access to Medicare Advantage Prescription Drug Plans with No Additional Premium, Total and by Plan Type, 2009-2016