Change in Number and Availability of Plans Offered by Firm

The firms and affiliates profiled in Table A4 account for 61 percent of available plans being offered in 2016 (Table A4). The types of plans offered vary across these firms and affiliates. Firm strategies are reflected both in the types of plans they offer and the share of beneficiaries to whom they are available (Figure 12; Table A5). This analysis focuses only on plans offered for broad based individual enrollment, and excludes special needs plans, employer-sponsored group plans for retirees and other types of plans only available to certain beneficiaries. 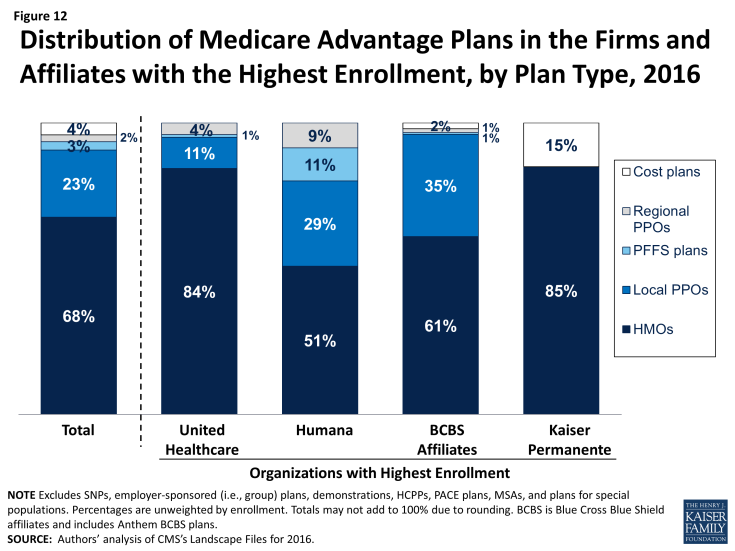 Figure 12: Distribution of Medicare Advantage Plans in the Firms and Affiliates with the Highest Enrollment, by Plan Type, 2016

Humana. Humana also has had a large footprint in Medicare Advantage for over a decade, and Medicare Advantage likewise comprises a large share of Humana’s business. Humana will continue to offer a broader mix of plan types than any other large firm or affiliate in 2016, but the total number of plans the firm offers will decline from 395 plans to 362 plans, continuing the firm’s trend of offering fewer plans each year since 2013. Similar to prior years, about half (51%) of Humana’s plans will be HMOs, about three in ten will be local PPOs (29%), and about one in ten will be PFFS plans (11%) or regional PPOs (9%). The vast majority of Medicare beneficiaries (85%) will have access to a plan offered by Humana in 2016, similar to 2015. HMOs, local PPOs, and regional PPOs offered by Humana will be available to more than half of beneficiaries (58%, 53%, and 61%, respectively) and Humana PFFS plans will be available to more than four in ten beneficiaries (43%). Average premiums (not weighted by enrollment) for local PPOs offered by Humana will decline between 2015 and 2016, while average premiums for other plan types offered by Humana will increase, with the largest average increases in premiums among PFFS plans. In early 2015, 19 percent of Medicare Advantage enrollees were in a Humana plan.

Blue Cross and Blue Shield Affiliates (BCBS). BCBS affiliates are separate companies that do not directly compete with each other and are affiliated nationally.3 Some have converted from non-profit to for-profit status in recent years, most notably Anthem BCBS. We analyze the BCBS affiliates together because the affiliation results in some similarities in approach. In 2016, more than six in ten of BCBS affiliates’ Medicare Advantage offerings will be HMOs (61%) while 35 percent will be local PPOs. Nearly three out of four beneficiaries nationwide (72%) will have access to a BCBS affiliated plan, including almost one-quarter (24%) who will have with access to an Anthem BCBS plan and 55 percent who will have access to plans offered by other companies under the BCBS trademark. In early 2015, 3 percent of Medicare Advantage enrollees were in an Anthem plan, including Anthem BCBS plans, and another 13 percent were in plans offered by other BCBS affiliates.

Aetna. Aetna’s footprint in the Medicare Advantage market has expanded since its acquisition of Coventry, and will become even larger if its proposed acquisition of Humana is approved by the Department of Justice. In 2016, Aetna plans will be available to almost half (49%) of all beneficiaries, up slightly from 45 percent in 2015 and 33 percent in 2014 prior to the acquisition of Coventry. Between 2015 and 2016, Aetna will increase the number of local PPOs it offers, rising from 74 plans in 2015 to 82 plans in 2016. Accordingly, a larger share of beneficiaries will have access to an Aetna local PPO (40%) in 2016, up from one-third (33%) of beneficiaries in 2015. Beginning in 2016, Aetna will begin offering regional PPOs in New Jersey and Ohio, and 7 percent of beneficiaries nationwide will have access to these new regional PPOs in 2016. In prior years, the only firms and affiliates that offered regional PPOs were UnitedHealthcare, Humana, and BCBS affiliates. In early 2015, 7 percent of Medicare Advantage enrollees were in a plan offered by Aetna.

Beyond these firms, many other firms and organizations sponsor Medicare Advantage plans, usually in limited geographical markets. Taken together, these firms provide plan options to 79 percent of beneficiaries.