People on Medicare have said that out-of-pocket spending is important to them when selecting their plan.1 Yet, it is challenging for beneficiaries to estimate their future out-of-pocket costs for all plans available in their area because it is difficult to predict their health care needs and virtually impossible to compare cost-sharing for specific services. One alternative for beneficiaries is to use the plans’ limits on out-of-pocket spending to gauge the maximum amount they could pay out-of-pocket in a plan for services covered under Medicare Part A and Part B, assuming they use only in-network providers.

The traditional Medicare program does not include a limit on out-of-pocket spending for services covered under Parts A and B, leaving beneficiaries in traditional Medicare with unlimited financial liability – an impetus for many beneficiaries to acquire supplemental coverage. In contrast, Medicare Advantage plans are required to limit enrollees’ out-of-pocket expenses for services covered under Parts A and B to no more than $6,700, with higher limits allowed for services received from out-of-network providers. Even before the 2011 implementation of this requirement, most Medicare Advantage plans (79% in 2010) voluntarily included a limit on enrollees’ out-of-pocket spending.2 CMS encourages plans to limit enrollees’ out-of-pocket expenses to no more than $3,400 per year, by allowing these plans to charge higher cost-sharing for some services. These out-of-pocket limits do not include expenses for prescription drugs covered under MA-PDs (which have separate Part D catastrophic threshold), nor do they include expenses for extra benefits or for services not covered by the plan. 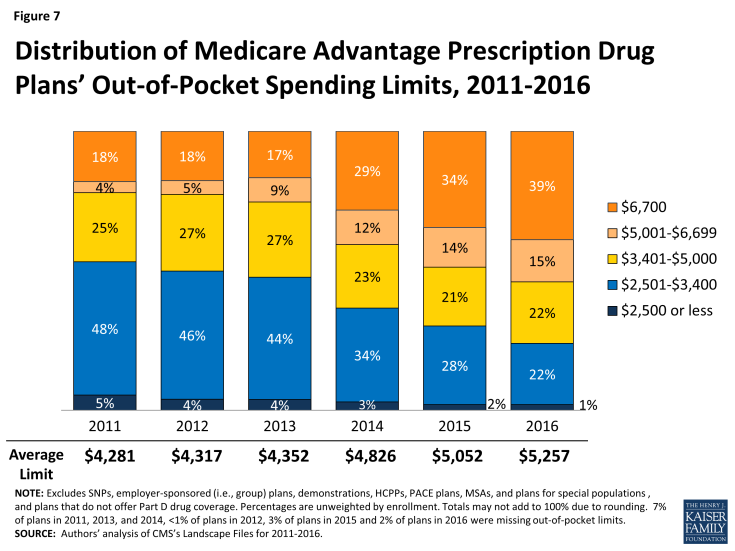 Average out-of-pocket limits are increasing across all plan types but a smaller share of HMOs than local PPOs or regional PPOs will have the maximum out-of-pocket limit allowed in 2016 (Figure 8). About three-quarters (73%) of regional PPOs, half (49%) of local PPOs, and one-third (35%) of HMOs have out of pocket limits equal to the maximum limit of $6,700. Limits at or below $3,400 now are rare in across all plan types. 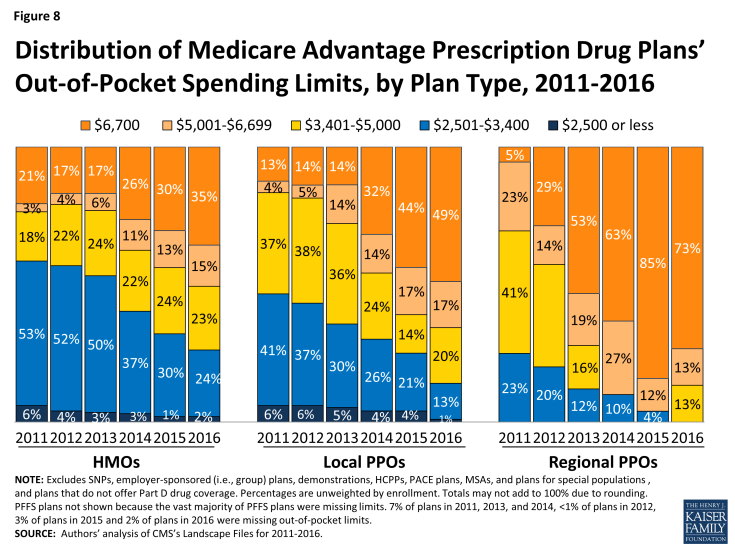