State fiscal conditions have a direct impact on Medicaid provider rates. During economic downturns, states often turn to provider rate cuts to control costs. Improving state finances in recent years have resulted in more states restoring or enhancing rates than restricting rates overall. In both FY 2015 and FY 2016, more states implemented or planned rate increases (47 and 45 states) compared to rate restrictions (35 states and 38 states) in those years. (Figure 11) Data for FY 2016 was not available for Illinois as budget deliberations were in process in September 2015.1 The number of states with rate increases exceeded the number of states with restrictions in FY 2015 and FY 2016 across all major categories of providers (physicians, MCOs and nursing homes) except for inpatient rates for hospitals.2 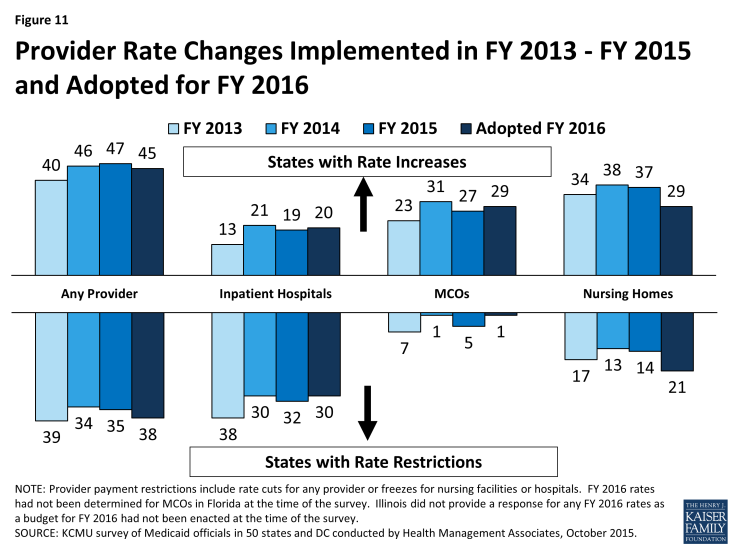 For the purposes of this report, provider rate restrictions include cuts to fee-for-service rates for physicians, dentists, outpatient hospitals, and to capitation rates for managed care organizations, as well as cuts or freezes in rates for inpatient hospitals and nursing homes. States were asked to report aggregate changes for each major provider category. The ultimate impact of some rate changes may differ across states depending on the delivery system. For example, the effect of fee-for-service rate restrictions for hospitals, physicians, and nursing facilities rates may have less impact on providers in states that rely heavily on managed care than in states that have little or no managed care presence.

Capitation payments for Medicaid Managed Care Organizations (MCOs) are generally bolstered by the federal requirement that states pay actuarially sound rates. In FY 2015 and FY 2016, the majority of the 39 states with Medicaid MCOs implemented or planned increases in MCO rates. Only five states reported MCO rate cuts in 2015, and only one state plans to cut MCO rates in FY 2016. To meet the federally required test of actuarial soundness, reductions to MCO rates may occur as a correction to previous rates that were set too high or to reflect reductions in fee-for-service rates or competitive price bids.

In addition to primary care providers, the survey also asked about rates for specialist physicians, dentists and for outpatient services. For each of these categories, states reported more rate increases than rate cuts, particularly in FY 2015 and FY 2016. (Figure 12) 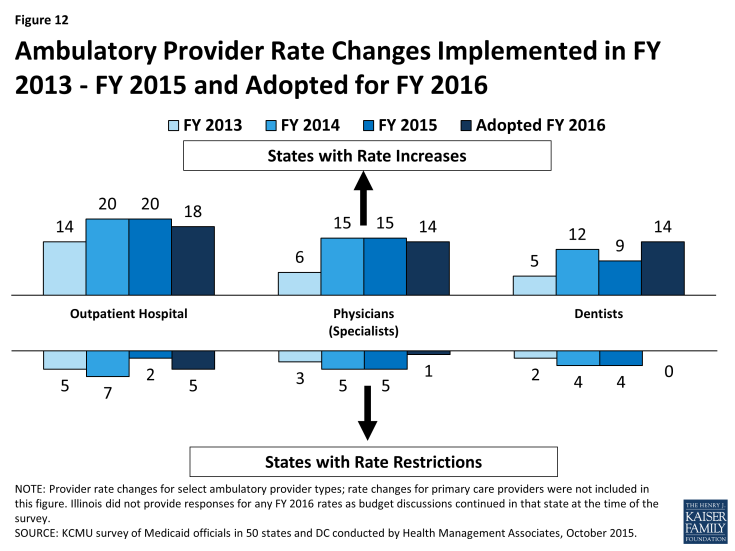 States were asked about reimbursement policies designed to reduce the number of early elective deliveries. Twenty (20) states had a policy in place in FY 2015 and six additional states plan to adopt such a policy in FY 2016. Some of the states that do not have such a policy indicated that their managed care organizations can elect to have such a policy. The most common policy was reduced payment (paying for a Cesarean-Section at the rate of a vaginal delivery) for any Cesarean-Section before 39 weeks gestational age unless there was documentation of medical necessity. States are also implementing incentive programs that reward providers for reducing the rate of early elective deliveries. 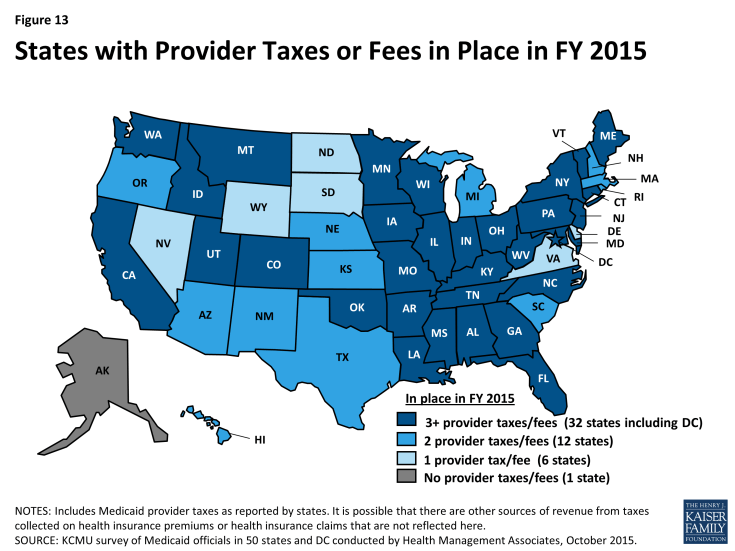 Figure 13: States with Provider Taxes or Fees in Place in FY 2015

The most common provider taxes in place in FY 2015 were taxes on nursing facilities (44 states), followed by taxes on hospitals (39 states) and intermediate care facilities (37 states). In recent years, states have made very few changes to the number of provider taxes. Minor changes for FY 2015 and FY 2016 include the following:

States were asked whether in the future they planned to use increased provider taxes or fees to fund all or part of the costs of the ACA Medicaid expansion that will occur in calendar year 2017 and beyond when the 100 percent federal match rate for expansion costs starts to decline. Seven of the expansion states (Arizona, California, Colorado, Indiana, Kentucky, Nevada and Ohio) responded that they had such plans. Other expansion states are studying provider taxes and fees. 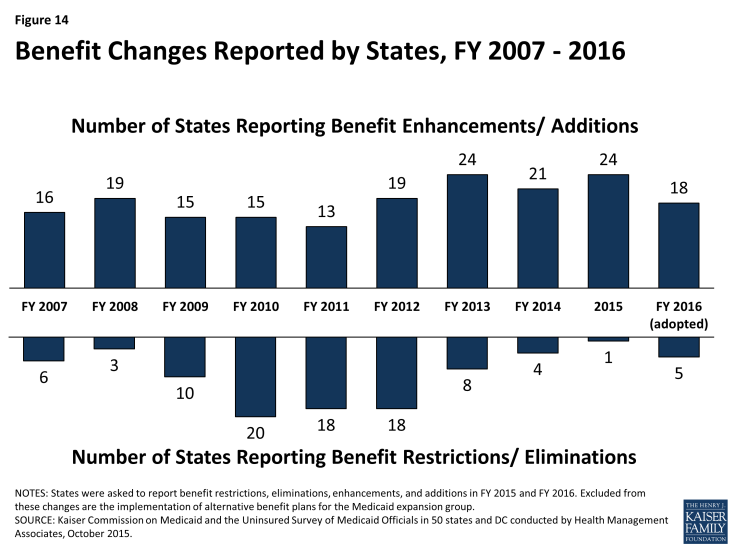 One of the most common benefit enhancements or additions reported was for behavioral health and substance abuse services. For example, Ohio is redesigning its behavioral health benefits to include coverage of additional services such as Assertive Community Treatment and Intensive Home Based Treatment. Other common benefit enhancements reported include home and community-based services including changes to 1915(c) waivers, new 1915(i) HCBS State Plan Option implementations and implementation of the Community First Choice State Plan Option. Also common were enhancements to dental services and telemedicine and tele-monitoring. (Table 18)

For its Medicaid expansion population, Pennsylvania reported replacing its Healthy PA waiver benefits plan (that included a number of physical and behavioral health service limits) with its traditional Medicaid benefit plan resulting in the elimination of those limits in FY 2015. Also, California is planning a notable benefit expansion for pregnant women in FY 2016; the state is planning to provide the full Medicaid benefit package to pregnant women up to 138 percent FPL in place of the current, more limited pregnancy-related benefit package.

Benefit restrictions reflect the elimination of a covered benefit or the application of utilization controls for existing benefits. In FY 2015, Arkansas imposed limits to non-emergency transportation for non-medically frail adults. For FY 2016, four states reported narrowly targeted benefit eliminations (Connecticut, New York, Oklahoma and Vermont) and one state (West Virginia) reported plans to apply a number of service limitations in its home and community-based services waiver serving persons with Intellectual and Developmental Disabilities to enable the waiver to operate within its budget while also serving more people on the waiting list.

Just over a decade ago, between 2001 and 2005, the vast majority of states aggressively implemented policies designed to slow the growth in Medicaid spending for prescription drugs. In January 2006, the implementation of the Medicare prescription drug benefit reduced total state Medicaid drug expenditures by almost half, the rate of growth in the cost of prescription drugs abated, and the intense Medicaid focus on pharmacy cost containment began to diminish. Since 2014, however, a combination of rising drug prices and increasing enrollments (as a result of ACA coverage expansions) have refocused state attention on pharmacy reimbursement and coverage policies. In this year’s survey, over two-thirds of the states in FY 2015 and half in FY 2016 reported actions to refine and enhance their pharmacy programs and to react to new and emerging specialty and high-cost drug therapies.

This year’s survey asked states to comment on the most significant factors affecting the trend in total Medicaid pharmacy expenditures (federal and state) between FY 2014 and projected for FY 2016. Responding to this open-ended question, the vast majority of states identified specialty and other high-cost drugs as a significant cost driver including a number of states identifying specific drug classes: hepatitis C antivirals, oncology drugs, cystic fibrosis agents and hemophilia factor. A few states also identified recently approved cholesterol drugs called “PCSK9 inhibitors” as likely cost drivers for FY 2016. In addition to specialty and other high-cost drugs, a number of states identified generic drugs as a significant cost driver, referencing large price increases for existing generics and higher than expected prices for new generics entering the market in addition to inflation and general drug price increases. Increased enrollment was also identified as a factor (including both ACA Medicaid expansion states and non-expansion states). A few states also identified factors that helped to moderate or reduce expenditure growth trends including higher rebates, drugs coming off patent and increased prior authorization and step therapy requirements. A number of states also commented that because pharmacy benefits for many enrollees were delivered under a capitated MCO arrangement, the growth in pharmacy expenditures could not be isolated.

In this year’s survey, states were asked to comment on whether their state had adopted or planned to adopt coverage, reimbursement or managed care policies targeting specialty or high-cost drugs in FYs 2015 or 2016.

Several states also reported other managed care policies specifically related to reimbursement of hepatitis C drugs in FY 2015: California and Florida pay “kick” payments to MCOs, Kansas pays a “case rate,” and Maryland makes supplemental payments to MCOs that follow the state’s hepatitis C clinical guidelines. New Mexico reported using risk corridors and Rhode Island reported stop-loss payments, and five states (DC, New Hampshire, South Carolina, Texas and Washington) reported carving these drugs out of the capitation payment. In some cases, these policies were reported as “temporary” to allow the state time to collect enough utilization data so that the cost of these drugs could be included in future capitation rates. Oregon also expressed the concern that the coverage of specialty and high-cost drugs could put its Section 1115 Demonstration Waiver budget neutrality ceiling at risk.

In addition, several states reported other pharmacy-related actions that were not included in the count of cost containment actions. Connecticut is allowing non-controlled prescriptions to remain valid for a full year (rather than six months) and is also implementing select OTC coverage for adults. DC, New York, Ohio and Vermont are awarding new administrative contracts for pharmacy benefit management and related services. Delaware, Indiana and Iowa are transitioning the pharmacy benefit to MCOs and Kansas is moving select vaccines to the pharmacy benefit under managed care. New York plans to carve in hemophilia factor products and injectable antipsychotic drugs into managed care contracts in FY 2016. Maryland carved-out substance use disorder drugs from managed care. Michigan is allowing behavioral health and other select physician injectables to be billed under the pharmacy benefit. Nebraska implemented Indian Health Service pharmacy reimbursement at an encounter rate. Texas is requiring MCO prior authorization policies to be reviewed and approved by its Drug Utilization Review Board.