Medicaid is the nation’s primary payer for long-term services and supports (LTSS) covering a continuum of services ranging from home and community-based services (HCBS) that allow persons to live independently in their own homes or in the community, to institutional care provided in nursing facilities and intermediate care facilities for individuals with intellectual disabilities (ICF-ID). Long-term services and supports represent at least one-third of Medicaid spending and are an important focus for state policymakers.1 This year’s survey shows that almost all states are employing a variety of tools and strategies to expand HCBS options including traditional Section 1915(c) HCBS waivers, PACE programs,2 and managed LTSS. 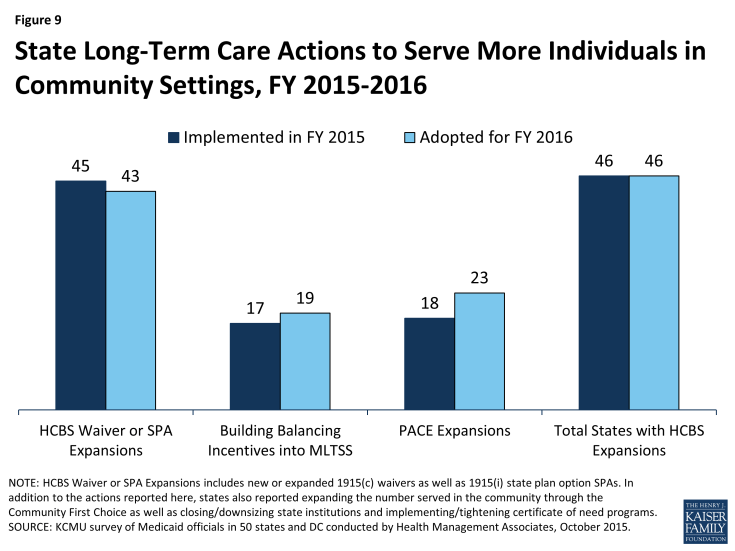 Several states reported on a number of other rebalancing initiatives. California reported that its Department of Health Care Services will collaborate with its Department of Housing and Community Development to award rental subsidies to developers and Medi-Cal community-based organizations (CBOs) using grant awards received from the U.S. Department of Housing and Urban Development. The CBOs will use the subsidies to transition institutionalized or homeless Medi-Cal beneficiaries into private independent living settings partnered with home and community-based services.3 Connecticut reported that it was continuing to implement its Strategic Plan to Rebalance Long-Term Services and Supports including a second round of rebalancing grant awards, announced by Governor Malloy in May 2015, to help the state’s nursing home industry diversify services to meet the changing needs of older adults and other people with disabilities. Several states also noted the implementation of conflict-free case management and single points of entry4 and one state commented that it was in the process of developing and testing a uniform assessment tool that, in the future, should have a positive impact on rebalancing the LTSS system.

Three states (Iowa, Illinois and Tennessee) reported new HCBS restrictions or limitations in FY 2015 or FY 2016: Iowa reported that its HCBS waiver for persons with intellectual and developmental disabilities (IDD) had reached its federally approved enrollment cap causing the state to implement a waiting list in FY 2015; Illinois reported that it is planning to change its Level of Care criteria for nursing homes as part of a legislative mandate which will also reduce the number of persons eligible for Section 1915(c) waiver services; and in FY 2016, Tennessee will also begin limiting new enrollment into a Section 1915(i)-like group (offered under Section 1115 authority) to SSI eligible beneficiaries only. People already enrolled in the group under institutional income standards will be grandfathered.5

Long-Term Services and Supports Options in the ACA 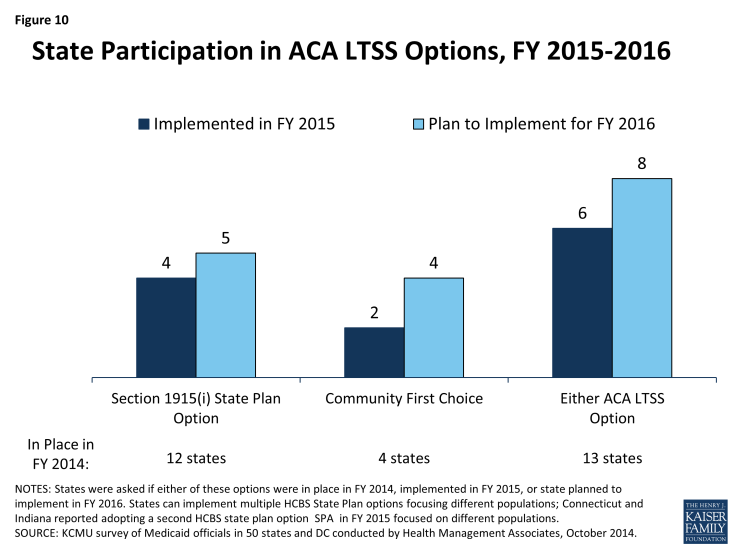 An additional program, the Balancing Incentive Program (BIP) was created under the ACA to provide enhanced Medicaid matching funds to certain states that meet requirements for expanding the share of LTSS spending for HCBS (and reducing the share of LTSS spending for institutional services). The enhanced funding ended in September 2015. For more information on the impact of this program, please see the following brief.6

This option allows states to offer HCBS through a Medicaid state plan amendment (SPA) rather than through a Section 1915(c) waiver. As a result of changes made in the ACA, income eligibility for this option was extended up to 300 percent of the maximum SSI federal benefit rate and states were permitted to target benefits to specific populations and offer the same range of HCBS under Section 1915(i) as are available under Section 1915(c) waivers. Unlike Section 1915(c) waivers, however, states are not permitted to cap enrollment or maintain a waiting list and, if offered, the benefit must be available statewide. If enrollment exceeds the state’s projections, the state may tighten their Section 1915(i) needs-based eligibility criteria, subject to advance notice and grandfathering of existing beneficiaries. Twelve states reported having an HCBS state plan option in place in FY 2014. Four states (Connecticut, Delaware, DC and Indiana) reported implementing in FY 2015; Connecticut and Indiana already had 1915(i) SPAs in place but implemented additional ones in FY 2015. Five states (Maryland, Minnesota, Mississippi, New York and Texas) reported plans to implement in FY 2016.

States were also asked to describe the target populations for their Section 1915(i) SPAs. Adults with significant mental health needs were identified by the largest number of states (7) followed by persons with intellectual and developmental disabilities (5), children with significant mental health needs (4), the elderly (3) and persons with vision impairments or physical disabilities (1). For some states, the target population included more than one of these categories. Also, two states (Connecticut and Idaho) have two Section 1915(i) SPAs in place, while Indiana implemented a third Section 1915(i) SPA in FY 2015 for adults diagnosed with mental health conditions and have incomes below 300 percent of the supplemental security income benefit rate (SSI), including persons who lost Medicaid coverage when the state’s spend-down program was eliminated.7