The ACA included a number of significant changes to Medicaid eligibility and enrollment policies. One of the most significant changes was to extend Medicaid coverage to nearly all non-elderly adults with incomes up to 138 percent of the federal poverty level (FPL) ($16,242 per year for an individual in 2015), ending the historic exclusion of adults without dependent children, or childless adults, from the program. However, the June 2012 Supreme Court ruling on the constitutionality of the ACA effectively made the Medicaid expansion optional for states. Regardless of whether states implement the Medicaid expansion, all states were required to implement a range of other changes to eligibility and enrollment under the ACA. These changes included transitioning to use of Modified Adjusted Gross Income (MAGI) to determine financial eligibility for children, pregnant women, parents and low-income adults; eliminating asset limits for these same groups; establishing a new minimum eligibility limit of 138 percent FPL for children in Medicaid, which resulted in the transition of older children from the Children’s Health Insurance Program (CHIP) to Medicaid in some states; and providing new streamlined application, enrollment, and renewal processes for individuals. In addition, Medicaid agencies must coordinate eligibility determination and enrollment processes with the new Marketplaces. Altogether, the eligibility changes in 2014 represent historic program changes. Most of these changes occurred in FY 2014. As a result, very few changes in eligibility standards occurred for FY 2015 and FY 2016. 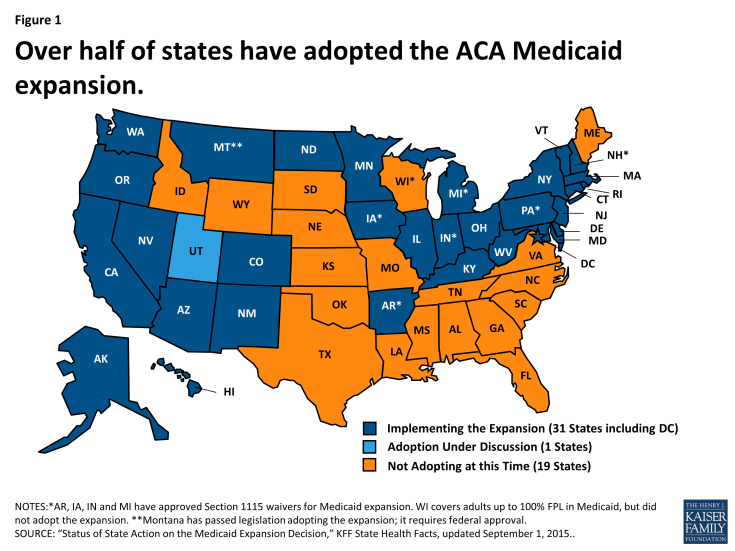 Figure 1: Over half of states have adopted the ACA Medicaid expansion. 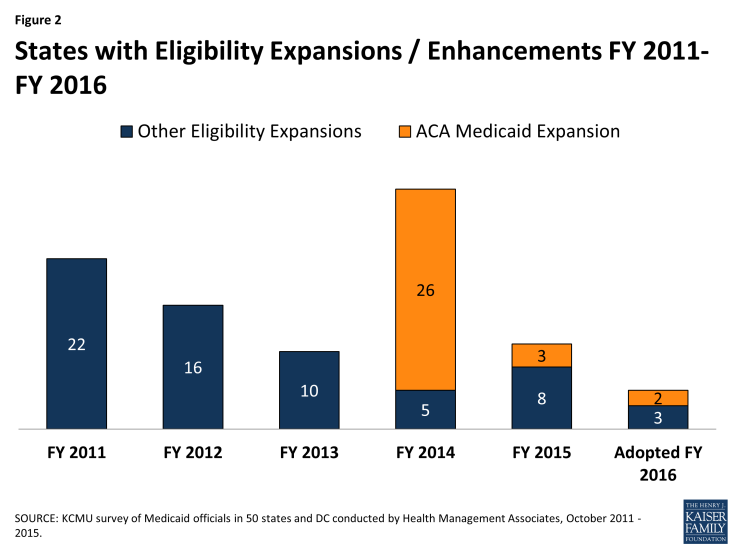 As reported last year, with more coverage options available across the income spectrum, some states made changes to existing Medicaid pathways. These changes are discussed below and are noted in Tables 2 and 3 as “(#)” meaning they are not counted as a positive or negative eligibility change.

Medicaid expansion states reducing eligibility for adults over 138 percent FPL. Both Minnesota and New York previously covered adults with incomes above traditional Medicaid eligibility levels through Medicaid waiver programs but have transferred those groups to their Basic Health Plans, discussed below. In addition, Connecticut reported plans to reduce Medicaid parent eligibility levels to 150 percent FPL in FY 2016; many parents previously eligible at the higher levels should be eligible for Marketplace subsidies.

States reducing or eliminating optional and limited Medicaid eligibility pathways. With new coverage options available either through the Medicaid expansion or the Marketplace, states have new options about how they treat some existing eligibility pathways for more limited Medicaid coverage, such as pregnancy related coverage, family planning-only programs, some spend-down programs, and the Breast and Cervical Cancer Treatment (BCCT) program.2 Prior to the implementation of the major ACA coverage changes, it was not clear if states would eliminate or scale back some of these programs in response to the new coverage options. While most states reported no current plans to change such pathways, many states indicated that enrollment in these groups has declined as more individuals are eligible under the adult Medicaid expansion group. However, a few states did note eligibility changes. (Table 1) In these cases, states generally plan to not allow new enrollment through these pathways but will continue coverage for those already enrolled.

Other eligibility changes were more targeted or limited. These changes are noted in Table 2, but a few include:

Only one state in FY 2015 (Wisconsin) and three states in FY 2016 (Ohio, Tennessee and Virginia) made or plan to make eligibility restrictions that are likely to leave individuals without other coverage options. These are targeted restrictions that would affect small groups of beneficiaries.

In addition, California mentioned plans in FY 2016 to extend coverage to all undocumented children. This is a state-funded initiative and not funded through Medicaid; therefore, it is not counted as a Medicaid policy change in this report.

As of January 1, 2014, new streamlined renewal policies for Medicaid also went into effect under the ACA. However, many states were delayed in implementing new renewal procedures. Recognizing this delay, during 2014, CMS allowed states to suspend renewals for existing enrollees for specified periods of time in order to free up staff resources to process new applicants and continue to update eligibility systems to implement new streamlined renewal procedures based on MAGI rules. States were asked if, at the time of the survey, they were experiencing challenges processing MAGI-based renewals and to describe those challenges.

A number of states reported that they were experiencing challenges processing MAGI-based renewals at the time of the survey. Most of the issues reported were related to new eligibility systems, high volume of renewals, challenges matching data, and issues with pre-populated renewal forms. Most of these challenges were seen as temporary issues, but were not yet fully resolved in some states at the start of FY 2016.

Starting in January 2014, the ACA allowed qualified hospitals to make Medicaid presumptive eligibility determinations. States were asked to describe the level of participation among hospitals in their states. Thirty-three (33) states reported that they have implemented HPE and have at least one hospital participating in the initiative; the remaining states noted that either they were still working to implement HPE or that no hospitals had signed up to participate at the time of the survey.

In July 2013, CMS released final rules designed to streamline and simplify regulations around Medicaid premiums and cost-sharing, consolidate existing law and provide for individual market premium assistance. Under the new rules, CMS clarified that total Medicaid premiums and cost-sharing incurred by all individuals in a Medicaid household may not exceed an aggregate limit of five percent of the family’s income, applied on either a quarterly or monthly basis. To enforce this, the new rules also extended the requirement that states track aggregate premiums and cost-sharing and suspend such payments if the household reached the five percent cap.3 In this year’s survey, several states commented on the difficulty of implementing a process to track these limits. In some cases, this has resulted in delays or reversals of plans to increase beneficiary cost-sharing.

With certain exceptions, Medicaid generally is not allowed to charge premiums to Medicaid beneficiaries with incomes at or below 150 percent FPL, although in limited cases certain populations may be charged premiums (sometimes referred to as “buy-in” programs) including: working individuals with disabilities eligible under the Ticket to Work and Work Incentives Improvement Act (TWWIIA) and children with disabilities in families with incomes that otherwise exceed Medicaid limits eligible under the Family Opportunity Act (FOA). States are also permitted under certain circumstances to impose premiums on parents receiving Transitional Medical Assistance (TMA) coverage. Prior to the ACA Medicaid expansion, a number of states also received Section 1115 waiver authority to expand coverage to higher income groups who were not otherwise eligible for Medicaid and to subject them to a premium requirement. Under the ACA, a few states have received federal waivers to impose premiums on their Medicaid expansion populations.

Increases for the ACA Expansion Population. Two states in FY 2015 (Indiana and Iowa) and four states in FY 2016 (Arizona, Montana, New Hampshire and New Mexico) adopted new copayments for their expansion populations. Four of these states (Arizona, Indiana, Iowa and New Mexico) noted changes in copayments related to non-emergent use of the Emergency Department (ED) for the expansion group; all but one (Indiana) planned to increase such copayments under existing state plan authority (up to $8). Indiana received a waiver under Section 1916(f) to test the effects of higher copayments ($8 for the first use of the ED and then $25 for subsequent use) than otherwise allowed under federal law (Section 1115 waiver authority does not extend to Medicaid cost-sharing requirements).5 Additionally, two states (New Hampshire and Michigan) reported plans to increase copayments for some expansion adults in FY 2016.