Medicaid enrollment and spending increased substantially in FY 2015, the first full year of implementation of the major ACA coverage expansions. Across all 50 states and DC, Medicaid enrollment increased on average by 13.8 percent in FY 2015, largely due to the ACA coverage expansions. Driven by growth in enrollment, total Medicaid spending increased by 13.9 percent on average in FY 2015. (ES – 1)  Beyond enrollment, states reported that the other drivers of increases in spending were provider rate increases and the higher cost of health care, including prescription drugs. Improvements in the economy were a downward pressure on enrollment which affected spending, but downward pressure in enrollment and spending as a result of the improving economy were outweighed by the ACA coverage policy changes. 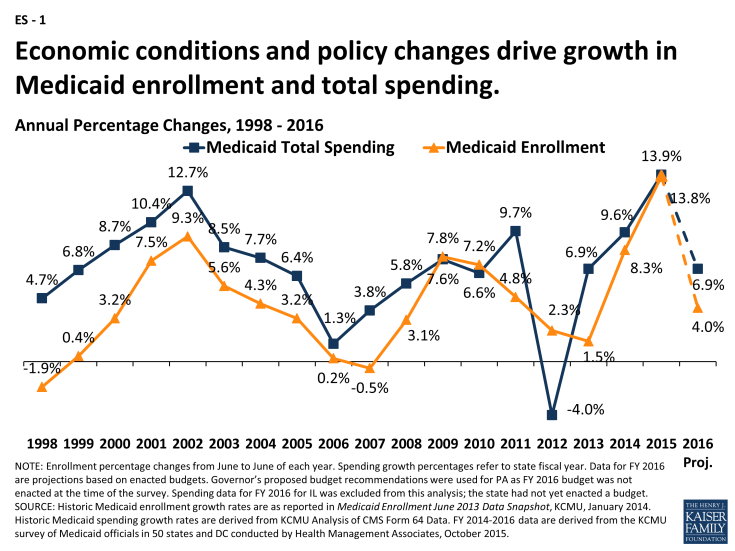 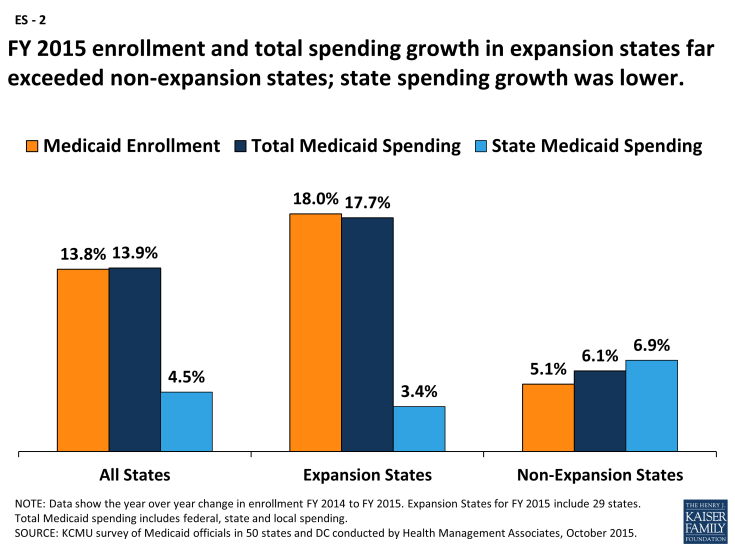 Total Medicaid enrollment and spending growth is projected to slow in FY 2016; looking ahead, states will monitor the effects of the ACA and other payment and delivery system reforms on spending. The major effects of the ACA were experienced by states in FY 2015; FY 2016 projections for Medicaid enrollment (4.0 percent) and total spending (6.9 percent) across all states indicate much slower growth on average than in FY 2015. Subsequently, the difference in enrollment and total spending growth rates across expansion and non-expansion states are projected to narrow in FY 2016. Expansion states are continuing to monitor and assess the effects of the Medicaid expansion on the state budget (within and beyond Medicaid). For FY 2015 and FY 2016, a number of Medicaid directors reported savings in areas including behavioral health, uncompensated care and criminal justice as well as increased revenue as a result of implementing the Medicaid expansion. Understanding these effects is important as states look ahead to 2017 when the enhanced match rate for newly eligible Medicaid expansion adults begins to decline; starting January 1, 2017 (halfway through FY 2017 for most states) the match rate will drop from 100 percent to 95 percent, resulting in a state fund share of 5 percent. Many states are also engaged in major payment and delivery system reforms that have implications for care delivery as well as program spending going forward.