Medicaid plays a significant role in the U.S. health care system, now providing health insurance coverage to more than one in five Americans. The Medicaid program continues to evolve, responding to changes in the economy, the broader health system, state budgets and policy priorities, and in recent years, to requirements and opportunities in the Affordable Care Act (ACA).

This report provides an in-depth examination of the changes taking place in Medicaid programs across the country. The findings in this report are drawn from the 15th annual budget survey of Medicaid officials in all 50 states and the District of Columbia conducted by the Kaiser Commission on Medicaid and the Uninsured and Health Management Associates (HMA), in collaboration with the National Association of Medicaid Directors. This report highlights policy changes implemented in state Medicaid programs in FY 2015 and those planned for implementation in FY 2016 based on information provided by the nation’s state Medicaid directors.

Policy changes and initiatives described in this report include those in eligibility and enrollment, managed care, delivery and payment system reforms, provider payment rates, and covered benefits (including prescription drug policies). The report also looks at the key issues and challenges now facing Medicaid programs.

Eligibility and enrollment changes in the ACA are continuing to have major policy implications for states in FY 2015 and FY 2016. As of October 2015, 31 states (including DC) had adopted the ACA Medicaid expansion. This includes 26 states that implemented the expansion in FY 2014, three additional states in FY 2015 (New Hampshire, Pennsylvania and Indiana) and two additional states in FY 2016 (Alaska and Montana). Other eligibility changes adopted or planned for states in FY 2015 and FY 2016 were small and targeted to a limited number of beneficiaries. As a result of new coverage pathways, a number of states are eliminating coverage for beneficiaries with incomes above 138 percent of poverty, many of whom qualify for Marketplace subsidies, as well as eligibility pathways to more limited Medicaid coverage. A few states had received or were seeking waivers to implement changes to premiums that were primarily related to the ACA coverage expansions (Arkansas, Indiana, Iowa, Michigan and Montana).

Under the ACA, all states were required to implement enrollment changes including new streamlined application, enrollment, and renewal processes for individuals. Many states adopted new eligibility and enrollment systems. A number of states were still working through challenges in processing renewals at the start of FY 2016.

States remain focused on strategies and initiatives to improve the effectiveness and outcomes of care, and to slow the growth in the cost of care. As of July 2015, a total of 48 states used some form of managed care to serve the Medicaid population, including 39 states (including DC) that contracted with risk-based managed care organizations (MCOs) to serve their Medicaid enrollees. In 21 of these states, at least 75 percent of all Medicaid beneficiaries were enrolled in MCOs. In FYs 2015 and 2016, the trend toward increased use of MCOs continues, as five states (Florida, Indiana, Iowa, Louisiana and Rhode Island) end their primary care case management (PCCM) programs and transition populations to MCOs. Other states are moving more eligibility groups, geographic areas and benefits into MCOs. As more states rely on MCOs for acute physical health care, a growing number of states are focusing on integration of physical health, behavioral health and long-term services and supports (LTSS) under the umbrella of managed care as a priority policy direction.

States are implementing and expanding alternative delivery system and payment models. Thirty-seven (37) states in either FY 2015 or FY 2016, including 27 states in FY 2015 and 28 states in FY 2016, reported adopting or expanding one or more initiatives that seek to control costs, reward quality and encourage integrated care. (ES 1) Initiatives include patient-centered medical homes (PCMHs), Health Homes, Accountable Care Organizations (ACOs) as well as other initiatives to coordinate physical and behavioral health care and better manage the care of persons with multiple chronic conditions. Nearly a quarter of states are implementing initiatives in FY 2015 or FY 2016 to coordinate care and financing for dually-eligible Medicare-Medicaid beneficiaries. A limited number of states are implementing episode of care and DSRIP initiatives.

States are implementing policies designed to “re-balance” care to allow more individuals to live in their homes and in the community. Nearly every state (46 states in both FY 2015 and FY 2016) took steps to expand care in the home and community. The ACA included some LTSS-related options intended to promote LTSS rebalancing including the Community First Choice Option and the 1915(i) HCBS State Plan Option. Thirteen (13) states reported having one or both of these options in place in FY 2014; an additional six states implemented at least one of these options in FY 2015 and eight states planned to do so in FY 2016. 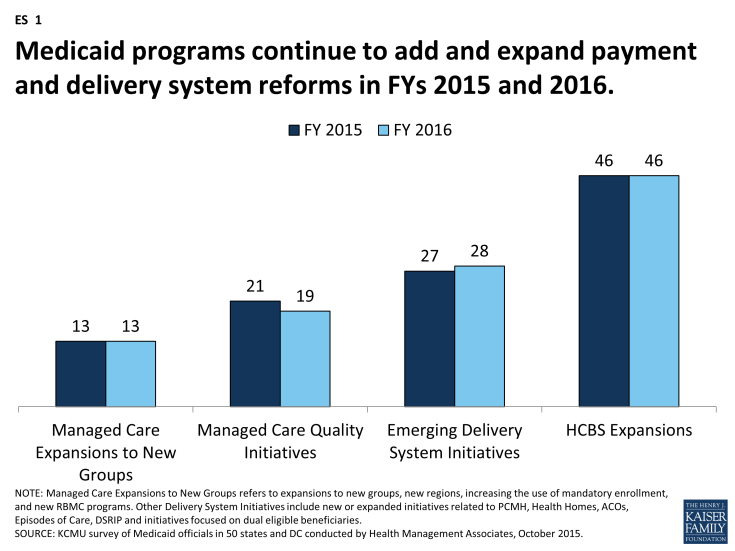 Given the size of Medicaid in state budgets, there is always pressure to control costs; however, improvements in the economy have allowed states to adopt more increases in reimbursement rates and benefits compared to restrictions. Medicaid provider payment rates and benefits are often adjusted in response to changes in the economy, with restrictions in times of economic downturns and state budget shortfalls, and restorations or enhancements when the economy and state revenues improve. In FY 2015 and FY 2016, more states implemented or planned for rate increases compared to restrictions (47 and 45 states increasing compared to 35 and 38 states restricting rates in those years). In this survey, a number of states reported that they have or are adopting reimbursement policies to reduce potentially preventable hospital readmissions and early elective deliveries.

All states (except Alaska) use at least one provider tax or fee to help finance Medicaid. Eighteen (18) states increased or planned to increase one or more provider taxes or fees in FYs 2015 and 2016. Seven (7) of the Medicaid expansion states (Arizona, California, Colorado, Indiana, Kentucky, Nevada and Ohio) reported plans to use increased provider taxes or fees to fund all or part of the costs of the ACA Medicaid expansion beginning in January 2017, when states must pay a small share of the costs of the expansion.

A total of 24 states expanded or enhanced covered benefits in FY 2015, and 18 states planned expansions in FY 2016. The most common benefit enhancements reported were for behavioral health and substance abuse services, HCBS and dental services for adults. Far fewer states reported benefit restrictions.

States have a renewed focus on controlling rising prescription drug costs. Since 2014, rising drug prices and increasing program costs have refocused state attention on pharmacy reimbursement and coverage policies. The majority of states identified high-cost and specialty drugs (e.g., hepatitis C antivirals among others) as a significant cost driver for state Medicaid programs as well as increased costs for generics among other factors. Over two-thirds of the states in FY 2015 and half in FY 2016 reported actions to refine and enhance their pharmacy programs in response to new and emerging specialty and high-cost drug therapies.

Medicaid directors reported a number of key priorities in FY 2016 and beyond. Medicaid is a large and complex program that provides health coverage for an increasing share of the population in each state. As the program continues to evolve, the key priorities for most directors are around implementing the ACA coverage provisions, controlling costs, implementing an array of complex delivery system reforms, and standing up new systems to support program operations related to enrollment, claims processing and delivery system reforms. Tackling this magnitude of change is a significant challenge, particularly given that most state Medicaid programs are operating within constrained resources, both in terms of staff and funding. Emerging priorities mentioned by Medicaid directors include population health and social determinants of health. (ES 2) State Medicaid programs are looking for opportunities to leverage other resources and stakeholders (such as state public health agencies and other payers) to improve the quality of care provided and ultimately affect health outcomes for the populations they serve. Pursuing these significant goals has caused Medicaid to evolve into a major player in transforming the overall health care system. 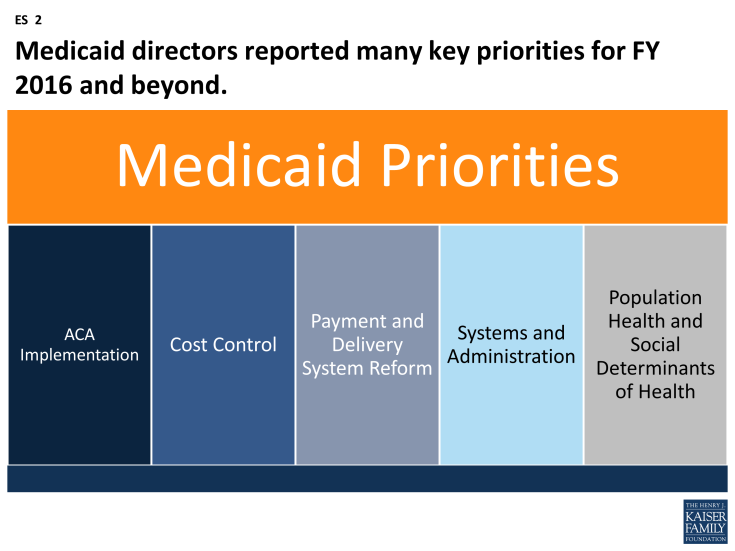 Figure ES-2: Medicaid directors reported many key priorities for FY 2016 and beyond.