Provider Rates and Taxes or Fees

Medicaid provider rates are affected by state fiscal conditions. During economic downturns, states often turn to provider rate cuts to control costs. This was the case during the Great Recession and during the economic downturn from 2001 to 2004. Improving state finances in recent years have resulted in more states enhancing rates than restricting rates overall. In FY 2014, 34 states reported one or more rate restrictions across provider types and 46 states reported one or more rate increases. For FY 2015, 33 states have planned at least one provider rate restriction while 45 states are planning at least one rate increase. Reflecting improvements in the economy, there were more rate increases in FY 2014 and FY 2015 across all major categories of providers (physicians, MCOs and nursing homes) except for inpatient rates for hospitals than in previous years.1 (Figure 10) Twelve states (Colorado, Hawaii, Idaho, Kentucky, Massachusetts, Nebraska, New Jersey, North Dakota, South Carolina, Vermont, Wisconsin, and West Virginia) reported no rate restrictions either year. In addition to these 12, five states had no restrictions in FY 2014, and six states reported no restrictions in FY 2015. 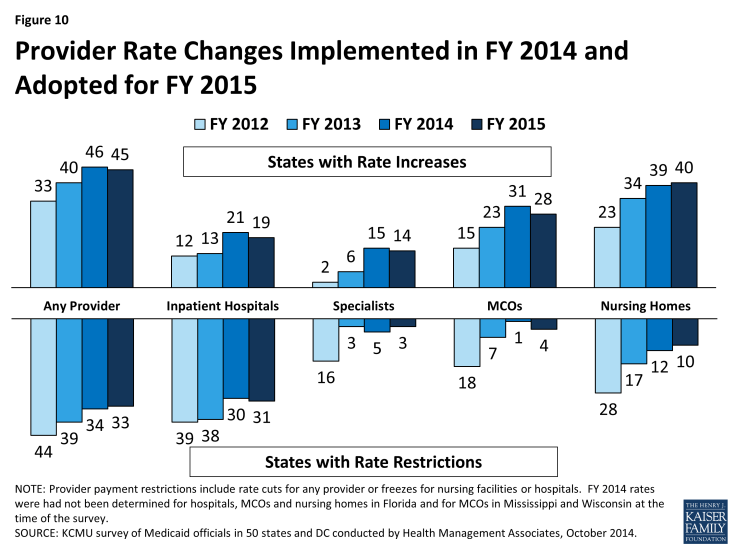 Institutional providers like hospitals and nursing homes are more likely than other providers to have inflation adjustments built into their rates, so historically they have been more likely than other groups to have rate increases. States are also more likely to use provider tax arrangements to support Medicaid payment rates for these provider groups. However, even with improvements in the economy and the use of hospital provider taxes in most states, hospitals are not seeing increases in their Medicaid rates in the majority of states while more than half of states report restrictions in hospital rates; nearly all of these states held inpatient hospital rates flat with a small number of states cutting such rates. Managed Care Organizations (MCOs) are generally bolstered by the federal requirement that states pay actuarially sound rates. In FY 2014 and FY 2015, the majority of states reported increases or planned increases in MCO rates with few states reporting restrictions.

Overall, about half of states increased rates for one or more physician groups in both FY 2014 and FY 2015 while fewer states imposed rate cuts for such groups; a sharp change from recent years. The survey asked more specifically about rates for specialists, dentists and for outpatient services. For each of these categories, states reported more rate increases than rate restrictions. (See following table).

For the purposes of this report, provider rate restrictions include cuts to rates for physicians, dentists, outpatient hospitals, and managed care organizations as well as both cuts or freezes in rates for inpatient hospitals and nursing homes.

States continue to rely on provider taxes and fees to provide a portion of the non-federal share of the costs of Medicaid. At the beginning of FY 2003, a total of 21 states had at least one provider tax in place; the most common provider tax was a tax on nursing facilities (44 states.) Over the past decade, a majority of states imposed new taxes and increased existing tax rates to raise revenue. By FY 2013, all but one state (Alaska) had one or more provider taxes in place.

Since FY 2013 there have been few changes in the number of provider taxes. In FY 2014, one provider tax (MCO tax in Oregon) was eliminated and two provider taxes (hospital tax in Arizona and a MCO tax in New Mexico2) were added. Arizona’s hospital fee will be used to fund costs related to their coverage restoration and eventually costs related to the Medicaid expansion in later years. In FY 2015, two states (Oregon and the District of Columbia) reported plans to eliminate hospital taxes and two states reported plans to add provider taxes. Illinois plans to implement a tax on providers in the Supportive Living Program; New Hampshire plans to implement a new MCO tax. A limited number of states reported changes to tax rates in FY 2014 and FY 2015, most notable were increases to rates for hospital taxes and fees (6 states in FY 2014 and 8 states in FY 2015) as well as increases to rates for nursing home taxes and fees in five states each year. A small number of states also reported reducing tax rates, again mostly for hospital and nursing home taxes and fees.