The ACA included a number of significant changes for Medicaid eligibility and enrollment. One of the most significant changes extends Medicaid coverage to nearly all non-elderly low-income adults with incomes up to 138 percent of the federal poverty level (FPL) ($16,104 per year for an individual in 2014), ending the Medicaid eligibility exclusion for adults without dependent children or childless adults regardless of their income. However, the June 2012 Supreme Court ruling on the ACA effectively made the decision to implement the Medicaid expansion optional for states. The ACA also required states to transition to the use of Modified Adjusted Gross Income (MAGI) to determine Medicaid financial eligibility for children, pregnant women, parents and low income adults; eliminate asset limits for these same groups; transition children with income between 100 and 133 percent FPL from the Children’s Health Insurance Program (CHIP) to Medicaid; and to use new streamlined application, enrollment, and renewal processes. In addition, Medicaid agencies were required to coordinate enrollment processes with the new Marketplaces. Altogether, the eligibility changes in 2014 represent historic program changes.

Adult Coverage Changes Under the ACA

In FY 2014, 26 states including the District of Columbia expanded Medicaid for low-income adults, either under the direct provisions of the ACA or through waivers (Arkansas, Iowa, and Michigan). For FY 2015, New Hampshire implemented the Medicaid expansion in July 2014, and Pennsylvania received CMS approval of the Healthy Pennsylvania waiver that will expand Medicaid eligibility for low-income adults as of January 1, 2015. As of September 2014, the total number of states implementing the Medicaid expansion is 28 (including DC.) (Figure 4) Two states (Indiana and Utah) continue discussions about implementing the Medicaid expansion. Indiana has submitted a formal waiver application that is under review at CMS; elements of this waiver proposal are discussed throughout the report in relevant sections. Utah’s Governor continues to negotiate with CMS but has not yet made a formal submission. Medicaid officials in several states noted that expanding Medicaid to more low-income adults would be discussed in the next legislative session. 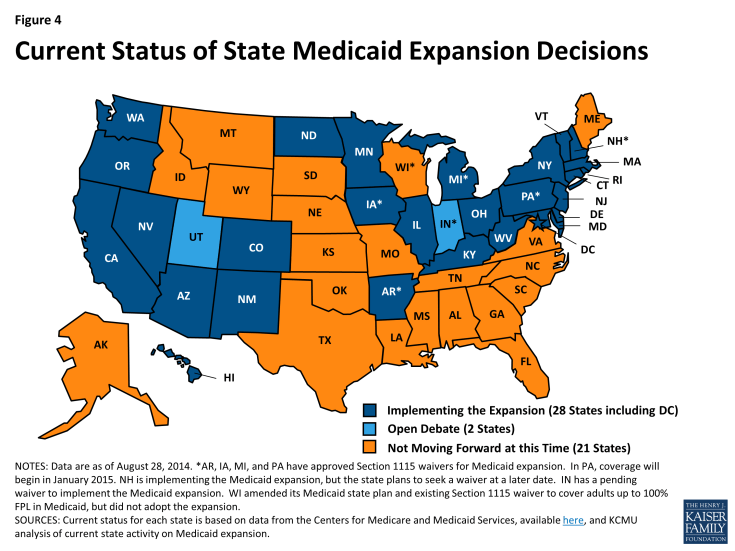 With more coverage options available across the income spectrum, some states made changes to existing Medicaid eligibility pathways to better conform to those options. These changes are included in Tables 1 and 2, but are not regarded as restrictions unless individuals previously covered through these pathways would not be expected to have access to coverage through these new options. States making these changes largely fall into three groups: 1) Medicaid expansion states changing Medicaid waiver coverage over 138 percent FPL; 2) States that have not adopted the expansion reducing Medicaid coverage over 100 percent FPL; and 3) States reducing or eliminating certain optional eligibility groups.

A few states had expanded eligibility to adults above 138 percent FPL prior to the ACA under waiver authority. With the availability of new coverage options in the Marketplace, seven states (California, Iowa, Massachusetts, New Mexico, New York, Rhode Island and Vermont) eliminated Medicaid coverage in their waivers for adults with incomes over 138 percent FPL. Three of these states (Massachusetts, New York and Vermont) have received or are seeking approval under a Medicaid waiver to use Medicaid funds to provide premium assistance that further subsidizes Marketplace coverage for individuals previously covered under their waiver.

A few states that have not adopted the Medicaid expansion covered adults above 100 percent FPL before the ACA was enacted, largely through waivers. Some of these states made eligibility changes in response to the availability of new Marketplace coverage options in 2014. In states not adopting the Medicaid expansion in 2014, those with incomes above 100 percent FPL in most cases will be eligible for subsidies to purchase coverage in the Marketplace.

The availability of subsidized Marketplace coverage and expanded Medicaid coverage (in 28 states) provides new options for states to reconsider coverage policies for certain optional, limited benefit eligibility groups, such as the family planning group, some spend-down programs, and the Breast and Cervical Cancer Treatment (BCCT) program.3 While most states reported no current plans to change these eligibility pathways; a few states did report eliminations or reductions:

Other Eligibility Changes for Adults

Two states made additional changes to Medicaid eligibility levels for adults aside from the changes made in response to the ACA. Montana increased the cap on enrollment in its Mental Health Services Plan (MHSP) waiver from 800 individuals to 2,000 individuals in FY 2014 and to 6,000 in FY 2015. Maine allowed its existing waiver that covered childless adults up to 100 percent FPL to expire, leaving most of the 9,000 individuals affected by this change without a coverage option, since eligibility for subsidies through the Marketplaces is limited to individuals with incomes above 100 percent FPL.

Eligibility Changes for Elderly Individuals and Those with Disabilities

Two states (Oklahoma and Louisiana) reduced eligibility for pregnant women to 138 percent FPL in FY 2014. Pregnant women losing eligibility in both states are likely eligible for coverage either through the Marketplace or CHIP in Louisiana. (As such, neither of these changes is counted here as a restriction.) Additionally, California and Rhode Island are working on initiatives to assist pregnant women with incomes above 138 percent FPL to purchase Marketplace coverage using Medicaid funding.

For children, the ACA implemented new policies across all states to help strengthen children’s coverage, such as providing Medicaid coverage to children aging out of foster care up to age 26 and requiring states to maintain eligibility thresholds for children that are at least equal to those in place at the time the ACA was enacted through September 30, 2019. In addition, the law established a minimum Medicaid eligibility level of 138 percent FPL for all children up to age 19. Prior to the ACA, the federal minimum eligibility levels for children varied by age, and the federal minimum for older children ages 6 to 18 was 100 percent FPL. As a result of the law, 21 states needed to transition children from CHIP to Medicaid in 2014; states still receive the enhanced CHIP federal matching rate for coverage of these children. (This change was not included in this report as an eligibility change since coverage for these children continues to be financed with Title XXI funds.)

In addition to changes in eligibility standards, some states were adopting options to further streamline application and renewal processes beyond those required by the ACA. States were also asked to report on implementation of hospital presumptive eligibility, efforts to coordinate with the Marketplaces, status of application backlogs, and plans for the next open enrollment period for Marketplace coverage.

Beyond changes required by the ACA, CMS offered states (in a letter dated May 17, 2013) the opportunity for expedited waivers for several new options that would further streamline application and renewal processes and facilitate enrollment. A majority of states implemented one of these options, namely to delay the annual Medicaid eligibility redeterminations that would normally have occurred during the first quarter of calendar 2014. For individuals scheduled for eligibility redetermination during this period, this waiver allowed Medicaid coverage to continue while staff were adjusting to the new MAGI income counting rules in all states and were focused on implementing the ACA Medicaid expansion in about half of states. Several states asked for and received extensions beyond March 31st that further delayed renewals for Medicaid enrollees. Also, as reported last year, about one third of states adopted an option to implement the MAGI rules before January 1, 2014. As of August 2014, CMS had approved the following states to use the remaining streamlining options:

States were asked about their plans to adopt these options in FY 2015. Washington reported plans to adopt the administrative data transfer option, and Kansas planned to implement 12 month continuous eligibility for adults. Several states noted that they have adopted strategies (e.g. express lane eligibility) that use SNAP data to facilitate Medicaid enrollment or target outreach. New York also reported having adopted 12 month continuous eligibility for adults, but under their existing 1115 waiver.6

Starting in January 2014, the ACA allows qualified hospitals to make Medicaid presumptive eligibility determinations in accordance with an approved State Plan Amendment. CMS issued HPE rules governing the state implementation of HPE on January 24, 2014, which delayed adoption in many states.7 Only 11 states reported implementing HPE in January (with later CMS approval). At the time of the survey, an additional 18 states had implemented HPE and three other states with approved plans expected to implement in the fall. Another 17 states reported that they had submitted state plan amendments to CMS but had not yet received approval; these states were in various stages of discussions with CMS and were also developing training materials. Four states indicated that their HPE plans were still under development. States reported a great deal of variation in hospital participation levels and in the volume of applications received through HPE. Among states that implemented HPE early, hospital participation ranged from only a few in some states to the majority of Medicaid hospitals. Some states indicated that hospitals were not interested in participating because it was easy to enroll individuals in Medicaid using “real time” on-line eligibility systems.