Medicaid has long-played an important role in the US healthcare system, accounting for one in every six dollars of all US health care spending while providing health and long-term services and supports coverage to over 66 million low-income Americans. However, the years 2014 and 2015 will stand out as a time of significant change and transformation. With the economy improving from the lingering effects of the Great Recession, Medicaid programs across the country were focused primarily on: implementing a myriad of changes included in the Affordable Care Act (ACA); pursuing innovative delivery and payment system reforms to help assure access, improve quality and achieve budget certainty, and continuing to administer this increasingly complex program. (Figure 1)This report provides an in depth examination of the changes taking place in state Medicaid programs across the country. The findings in this report are drawn from the 14th annual budget survey of Medicaid officials in all 50 states and the District of Columbia conducted by the Kaiser Commission on Medicaid and the Uninsured and Health Management Associates (HMA), with the support of the National Association of Medicaid Directors. This report highlights policy changes implemented in state Medicaid programs in FY 2014 and those planned for implementation in FY 2015 based on information provided by the nation’s state Medicaid Directors.

In FY 2014 and FY 2015, states were implementing a host of ACA-related eligibility and enrollment changes in Medicaid.

Many of the Affordable Care Act’s provisions affecting Medicaid eligibility and enrollment went into effect during FY 2014, most significantly the Medicaid expansion. Medicaid’s role, as enacted under the ACA, was broadened to become the foundation of coverage for nearly all low-income Americans with incomes up to 138 percent of the federal poverty level (FPL); however, the Supreme Court ruling on the ACA effectively made the decision to implement the Medicaid expansion an option for states. As of September 2014, 28 states (including DC) are implementing the Medicaid expansion. Regardless of the expansion decision, all states were required to streamline Medicaid enrollment and renewal processes, transition to a uniform income eligibility standard (Modified Adjusted Gross Income or MAGI) and coordinate with new Marketplaces. 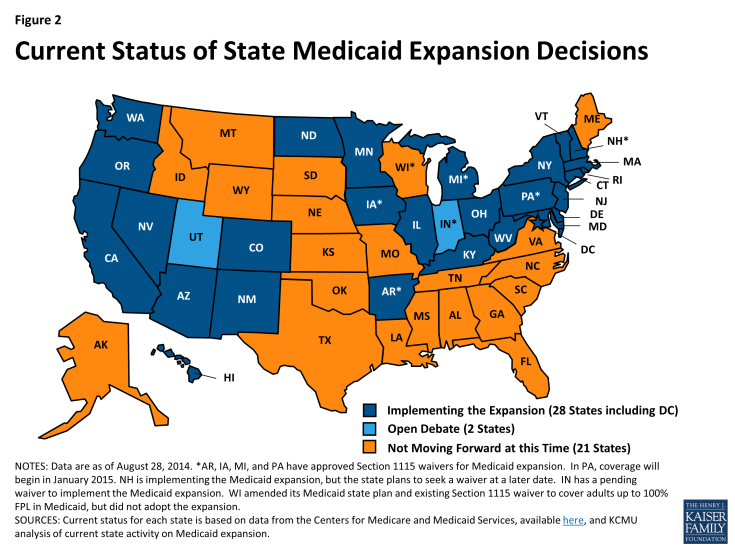 States reported a number of changes to better align new and pre-ACA coverage options. For example, some states that had previously expanded Medicaid coverage to adults with incomes above poverty are eliminating such coverage in light of new coverage options available through the Marketplaces. Four states reported Medicaid eligibility restrictions. Meanwhile, children’s coverage remains strong as maintenance of eligibility for Medicaid and CHIP children is in place through 2019.

Focus on delivery system reforms in Medicaid programs continued to build in FY 2014 and FY 2015. (Figure 3) 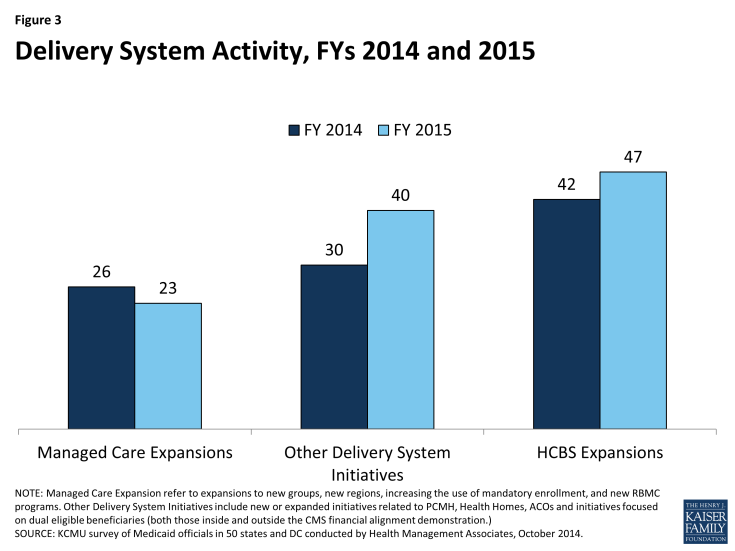 Most Medicaid programs use managed care as a means to help assure access, improve quality and achieve budget certainty. As of July 2014, all states except three – Alaska, Connecticut and Wyoming – had in place some form of managed care including risk-based comprehensive managed care organizations (MCO), Primary Care Case Management (PCCM) programs or both. States continued to take actions to increase enrollment in managed care. Of the 39 states (including DC) with MCOs, over half in FY 2014 and FY 2015 reported specific policy changes to increase the number of enrollees in risk-based managed care by adding eligibility groups, making enrollment mandatory or expanding to new regions. In addition to expanding managed care, new quality improvement initiatives such as adding or enhancing pay-for-performance arrangements to their managed care contracts were implemented in 34 states in FYs 2014 or 2015.

In FY 2014 and FY 2015, 42 and 47 states, respectively, took actions that expanded the number of persons served in a home and community-based services (HCBS) setting, notably higher than the number of states taking such action in FY 2012 (26) and FY 2013 (33). While most states reported using Section 1915(c) waiver authority to expand HCBS, a significant number of states (13 in FY 2014 and 16 in FY 2015) reported that the incentives built into their managed long-term services and support (LTSS) programs were expected to increase the number of people served in community settings. Nineteen states had at least one of the new ACA long-term services and supports options in place in FY 2013; an additional 12 states in FY 2014 and 15 states in FY 2014 plan to implement one or more of these options.

Provider Rates. As economic conditions have continued to improve, states have been able to implement program restorations or increases in provider rates. More states implemented provider rate increases across most major provider types (physicians, nursing homes and managed care) in FY 2014 and FY 2015, inpatient hospital rates being the exception. This survey also asked states about plans to extend the primary care physician fee increase beyond December 31, 2014 (at regular FMAP rates); 24 states indicated that they would not be continuing the rate increase while 15 states indicated that they will continue the higher rates at least partially. Some had not decided at the time of the survey. Other states have Medicaid physician rates that are already close to 100 percent of Medicare rates, making the issue less significant in these states.

Benefits. The number of states reporting benefit cuts or restrictions – four in FY 2014 and two in FY 2015 – fell to the lowest level since 2008. A far larger number (21 states in FY 2014 and 22 in FY 2015), reported expanding benefits, most commonly behavioral health, dental and home and community-based services.

Pharmacy. A little over half of the states continue to take steps to refine their pharmacy programs, and almost all states are concerned about the potential future fiscal impact of new and emerging specialty drug therapies. Many states (22) reported that new clinical prior authorization criteria were already in place or under development to help address such concerns.

Cost-Sharing. There was a modest increase in the number states reporting actual or planned cost-sharing increases compared to earlier years. About half of these increases were for higher income expansion groups.

Looking ahead, states plan to focus on implementing the ACA, putting into place innovative delivery system reforms and continuing to manage a complex program with limited staff and resources.

In the history of Medicaid, the years 2014 and 2015 will stand out as a time of significant change. For most states, implementation of the Medicaid changes under the ACA was transformative for Medicaid from policy, operations and systems perspectives. At the same time, Medicaid programs across states have continued to increase their focus on delivery system and payment reform with the goals of improving quality of care and controlling costs. States are expanding their reliance on managed care but also implementing new innovative delivery system and care coordination arrangements, some of which are new options made available by the ACA. In coordination with these efforts, Medicaid programs are also focused on better ways to deliver long-term care services and supports by expanding home and community-based service programs. More states have been able to implement provider rate increases as well as benefit increases as the economy has continued to slowly recovery. Most Directors reported staffing and resource constraints in the face of the magnitude of changes occurring in the program today. Despite these challenges, Medicaid continues to evolve to meet the needs of the growing number of people it serves and to play a larger role in the broader health care delivery system.

We thank the Medicaid directors and Medicaid staff in all 50 states and the District of Columbia who completed the survey on which this study is based. Especially in this time of limited resources and challenging workloads, we truly appreciate the time and effort provided by these public servants to complete the survey, to participate in structured interviews and to respond to our follow-up questions. It is their work that made this report possible.

We offer special thanks to two of our colleagues at Health Management Associates. Dennis Roberts developed and managed the database, and his work is invaluable to us. Jenna Walls assisted with writing the case studies and we thank her for her excellent work.