How are states managing use and costs in their programs?

Managing the Medicaid prescription drug benefit and pharmacy expenditures remains a policy priority for state Medicaid programs, and state policymakers remain concerned about Medicaid prescription drug spending growth. Because state Medicaid programs are required to cover all drugs from manufacturers that have entered into a federal rebate agreement (in both managed care and FFS settings), states cannot limit the scope of covered drugs to control drug costs. Instead, states use an array of payment strategies and utilization controls, discussed below, to manage pharmacy expenditures.

Most state Medicaid programs maintain a preferred drug list (PDL), a list of outpatient prescription drugs the state encourages providers to prescribe over others. A state may require prior authorization for a drug not on a preferred drug list or attach a higher copayment, creating incentives for a provider to prescribe a drug on the PDL when possible. In this way, a PDL allows a state to drive utilization to lower-cost drugs, including drugs for which the state has negotiated a supplemental rebate with the manufacturer. With the exception of four states (Hawaii, New Jersey, New Mexico, and South Dakota), all other responding states (46 of 50 states) reported having a PDL in place for FFS prescriptions as of July 1, 2019, and also negotiating supplemental rebates for preferred agents.

Most state P&T committees are responsible for determining PDL placement for new drugs (29 states). A small number of states reported that either the Medicaid agency (7 states) or the DUR board (6 states) is responsible for the review of new drugs for inclusion on the PDL.

Most state DUR Boards and/or P&T Committees review PDLs at least annually. For PDL reviews, 20 of 50 responding states reported annual reviews, and 10 of the 17 states that reported other review periods review their PDLs quarterly, with an additional three states reviewing bi-annually (Appendix Table 5).

In recent years, a growing number of MCO states have adopted uniform PDLs requiring all MCOs to cover the same drugs as the state. In a previous survey of state Medicaid programs, just nine states reported having a uniform PDL across FFS and managed care in FY 2015.1 In this survey, 16 MCO states reported having a uniform PDL for some or all classes as of July 2019, 18 states reported no uniform PDL requirement (Figure 4). Eight states, however, reported plans to establish (Illinois, Ohio, New Hampshire, and Pennsylvania) or expand (Arizona, Massachusetts, Nebraska, and Washington) a uniform PDL in FY 2020. Several states noted that possible future changes were under consideration. Notably, Washington is considering including the physician-administered drugs on the PDL. 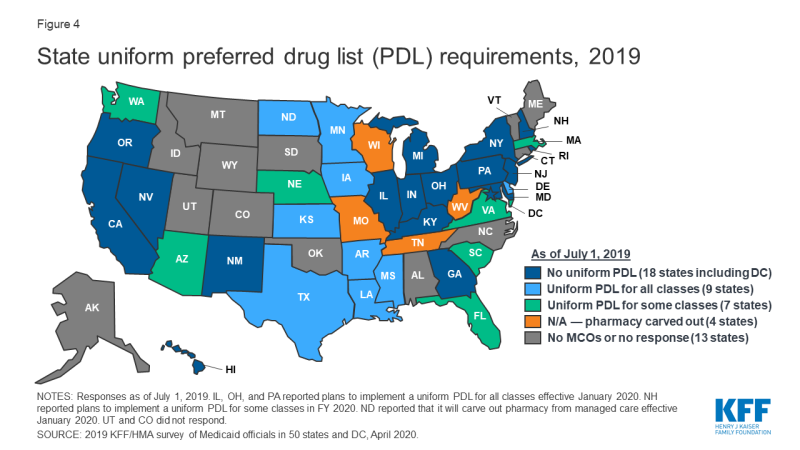 Though not all states utilize a uniform PDL, many states do review and approve MCOs’ PDL changes. More than half of the MCO states reported that the DUR Board, P&T Committee, or other state entity reviews and/or approves MCO PDL changes.

Prior Authorization and Step Therapy 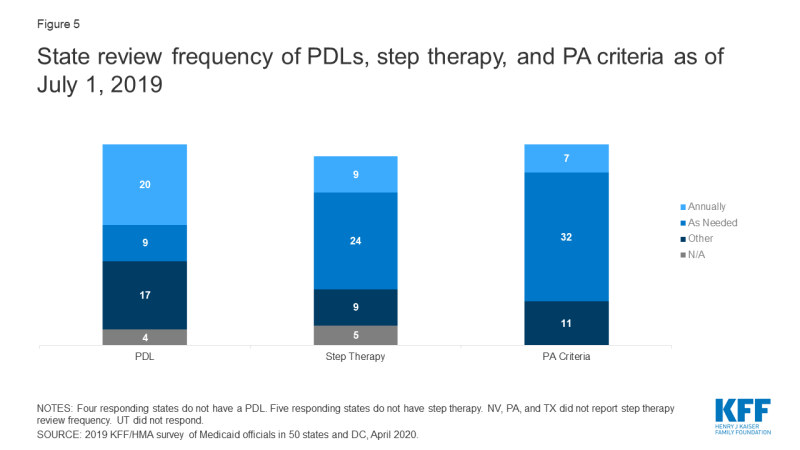 Most states report that new drugs are subject to PA before undergoing initial review by the DUR Board and/or P&T committee. Four states without a PDL (Hawaii, New Jersey, New Mexico, and South Dakota) reported no PA requirement for new drugs while all other responding states reported that PA was always (16 states) or sometimes (30 states) required. For states answering “sometimes,” states identified reasons related to the new drug’s PDL status, cost and class as conditions for PA prior to review (Table 4). As one state noted, not requiring PA for a new drug could have a detrimental impact on supplemental rebates earned on existing PDL-preferred agents.

While states often impose PA on high-cost specialty or non-preferred drugs, a number of states have legislation protecting drug classes or categories from the use of these tools in some or all circumstances. Nearly half of the responding states (24) reported one or more state statutory limits in place on the Medicaid agency’s ability to subject a drug or drug class to FFS utilization controls such as PA or step therapy requirements (Table 5). In some cases, states noted that the statutory prohibition applied to PDL placement but did not prevent the Medicaid agency from imposing quantity limits. Of the 24 states with a statutory limit on utilization controls, 17 included pharmacy as a covered benefit under an MCO arrangement. All but five of these states (Maryland, Michigan, North Dakota, Rhode Island, and Virginia), also applied the statutory limits to MCOs.2 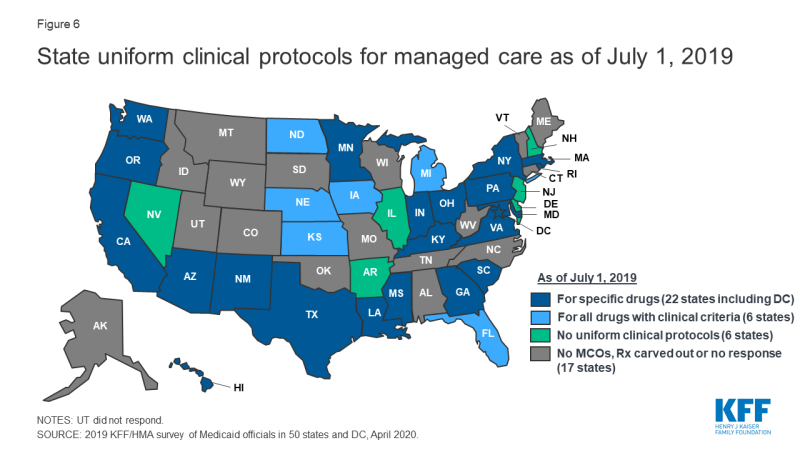 Similar to their oversight of PDL changes, some states report oversight of MCO PA and step therapy criteria regardless of their uniform requirements for these rules, with the majority of those responding indicating that the state oversees either step therapy, PA/utilization management criteria, or both.

Some states report imposing limits on the number of total and/or brand prescriptions a beneficiary may access in a month without PA. States may limit the number of prescriptions a beneficiary may access without prior authorization,4 but prescribers and pharmacists may submit requests to override these limits when medically necessary or under other specific circumstances. About one-quarter of the 50 responding states5 (13 states) reported imposing a monthly limit on FFS prescriptions (Figure 7 and Appendix Table 6). Nine of these 13 states reported that the limit could be overridden using PA or other appeals process.6 Three states reported applying monthly prescription limits only to narcotics and seven of the remaining 10 states with limits noted a number of excluded drugs or drug classes such as HIV antiretrovirals (6 states), cancer drugs (5 states), family planning products (5 states), mental health drugs (4 states), and tobacco cessation products (3 states). Six of the 13 states reported applying the limits only to adults, and four states noted specific exemptions for persons receiving long term services and supports. 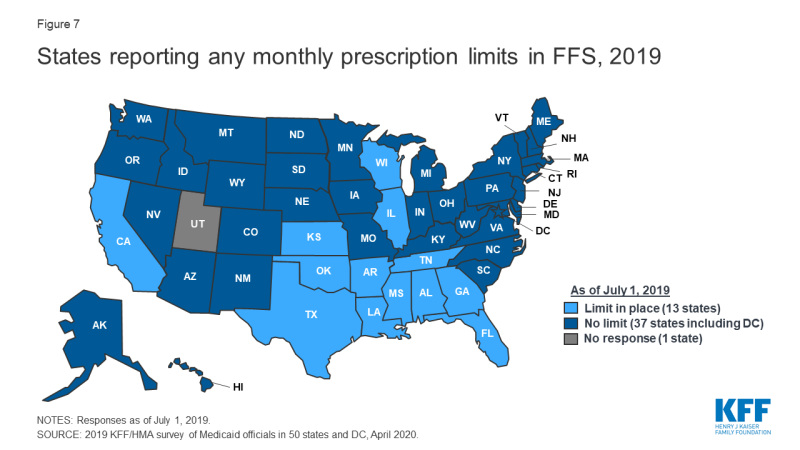 Prescription limits were less likely to be uniform across FFS and MCOs as other utilization management tools. States imposing monthly limits were also asked to indicate if MCOs were required to apply the same limits, PA/appeals processes, and exemptions. Four of the 13 states had no MCOs (Alabama and Oklahoma) or did not include pharmacy as an MCO-covered benefit (Tennessee and Wisconsin). Of the remaining nine states, only one (Mississippi) required MCOs to apply the same limits and two states (Florida and Louisiana) noted that MCOs could be less restrictive, but not more restrictive, than the state’s FFS policy. Only one state reported a planned change for FY 2020: Mississippi increased the number of drugs covered in its monthly prescription limit to six from five effective July 1, 2019.

Almost all states have policies or tools in place to promote generic utilization. As shown in Table 7 and Appendix Table 7, the most common policy reported was a mandatory generics policy (41 states). Only three states (California, New Hampshire, and Nevada) reported having no policies or tools in place. No state reported planned changes to their policies for generic utilization for FY 2020, although one state noted that where applicable, the state will switch from a preferred brand to a preferred generic if the generic becomes less expensive. 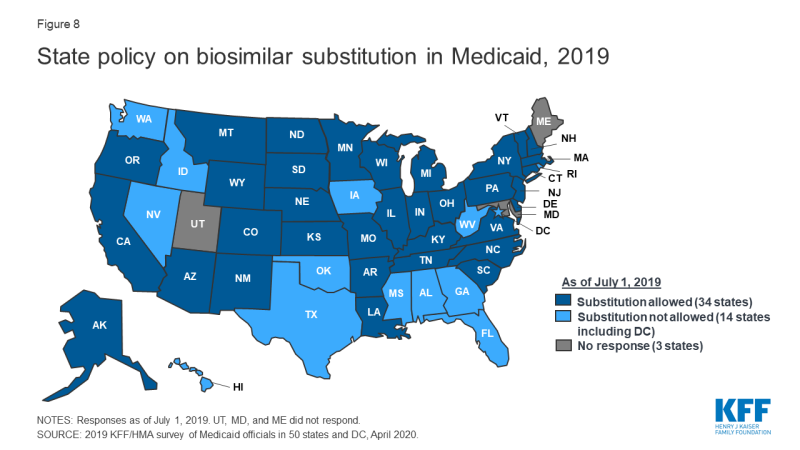 The vast majority of responding states (45 of 50) require biosimilar drugs to undergo the same DUR Board/P&T committee review process as other drugs. Five states, however, reported a different process: Arizona’s P&T Committee reviews biosimilars only if the branded product is available within 180 days of when the biosimilar becomes available in the market; Montana will use the same criteria as the original product, unless the DUR Board requests a separate review; New Mexico reported covering biosimilars based on FDA approval and a CMS rebate agreement; Rhode Island indicated that the Medicaid agency reviews biosimilars; and Vermont reported performing a financial analysis in place of a full new drug review.

About half of MCO states align some or all FFS and MCO generic substitution policies. Of the 34 responding states that include pharmacy as an MCO covered benefit, 12 reported that MCOs were required to follow the state’s FFS generic policies,8 while three MCO states (Minnesota, New York, and Washington) reported that MCOs were required to following MCO policies in part.