What entities are responsible for administering the Medicaid drug benefit?

States may administer the Medicaid pharmacy benefit on their own or may contract out one or more functions to other parties. The administration of the pharmacy benefit has evolved over time to include delivery through managed care (MCOs) and more reliance on pharmacy benefit managers (PBMs). In addition, drug utilization review (DUR) boards and pharmacy and therapeutics (P&T) committees play an oversight and administrative role in Medicaid pharmacy benefits. State contracts with MCOs, PBMs, or other vendors may have important implications for Medicaid enrollees and providers who are sometimes challenged by the administrative processes they must navigate to access or be reimbursed for medically necessary drugs. MCO subcontracts with PBMs are also under increasing scrutiny as more states recognize a need for more stringent oversight and management of these subcontract arrangements.

Managed care plans play a major role in administering Medicaid pharmacy benefits, with a majority of states using comprehensive managed care arrangements that include prescription drugs as a covered benefit. As of July 1, 2019, 40 states had comprehensive, risk-based contracts with one or more managed care organization (MCOs).1 States with MCOs may opt to “carve in” the pharmacy benefit by including it as a covered benefit and placing the MCO at risk for costs, “carve out” the pharmacy benefit by excluding it from the MCO contract and covering drugs in FFS, or carve in some drugs and carve out others. Changes made to the rebate program by the Affordable Care Act (ACA) have encouraged more states to carve in the pharmacy benefit, allowing states to increase budget predictability and leave the MCO accountable for drug costs.2,3 States that include pharmacy as an MCO-covered benefit may also build administrative and clinical pharmacy requirements into the MCO contract, as discussed in more detail later in this report.

Carve-out vs. Carve-in of the Pharmacy Benefit

In general, carving the pharmacy benefit into the MCO benefit remains the prevalent approach for managing the prescription drug program for MCO enrollees. Of the 39 MCO states that responded to this survey question, only four states – Missouri, Tennessee, West Virginia, and Wisconsin4 – reported that pharmacy benefits were generally carved out (with possible exceptions) as of July 1, 2019, while the remaining 35 states reported that pharmacy benefits were generally carved in (Figure 1). 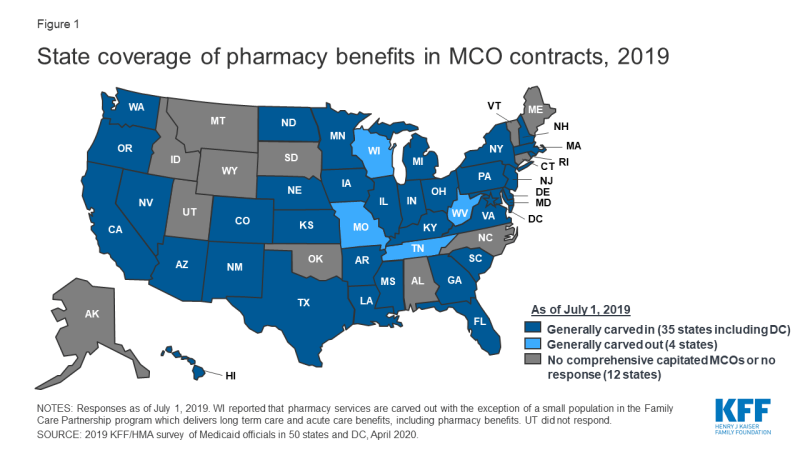 States are more likely to carve out certain subsets of drugs than to carve out the full benefit. We asked states about their use of carve-outs for certain high-cost drug groups/classes: 15 states report carving out one or more of these classes (Table 1 and Appendix Table 1). Of those states, 12 (California, DC, Iowa, Indiana, Maryland, Michigan, Mississippi, New Hampshire, Ohio, Oregon, South Carolina, Washington) report using the class carve-outs as part of a risk mitigation strategy, as discussed in more detail below.

States are planning additional drug carve-outs for specialty or “blockbuster” drugs. For FY 2020, three states (North Dakota, Nevada, and Washington) reported plans to carve out additional drugs (with North Dakota intending to carve out the full pharmacy benefit), and Maryland reported plans to implement both carve-in and carve-out strategies. The most commonly mentioned drugs carved out or considered for carve-out strategies are Zolgensma and Spinraza, gene therapy treatments for spinal muscular atrophy. Other agents mentioned include CAR-T therapies,7 cystic fibrosis, and muscular dystrophy drugs. Washington indicated it will take a drug-specific approach to new carve-outs, reviewing specifically for impacts to the actuarial soundness of rates or for the likelihood that the financial impact of the new drug will not be spread equally across Medicaid plans. While carving specialty drugs out of the pharmacy benefit is a more common strategy, two states reported an intention to carve drugs back into the managed care benefit in FY 2020: Maryland will carve in HIV/AIDS drugs and Michigan will carve in hemophilia and oncology drugs and select drugs used to treat rare metabolic diseases.

States that use MCOs to deliver some or all pharmacy benefits to Medicaid enrollees may use risk mitigation strategies to curb plans’ financial risk. As of July 1, 2019, states reported deploying a variety of financial risk mitigation strategies in their MCO contracts, with drug carve-outs and risk corridors being the most common (Table 2). For drug carve-outs, hepatitis C and hemophilia drugs were those most commonly mentioned among states with risk mitigation strategies in place. Six states reported planned changes for FY 2020: Maryland, Nevada, and Washington are carving out additional drugs; Kansas is implementing different reimbursement methods for high-cost drugs; Ohio is removing the hepatitis C risk pool in 20208; and Michigan reported a plan to implement high-cost drug kick payments for certain drugs being carved in as of October 1, 2019.

The Role of PBMs and Other Vendors in Administering Pharmacy Benefits

State use of external vendors to administer the pharmacy benefit, particularly the use of PBMs, has generated considerable policy debate about costs and prices in Medicaid. While the relationship between state Medicaid programs and PBMs is not new, the extent to which states rely on PBMs has grown significantly in the past ten years. PBMs may perform a variety of financial and clinical services for Medicaid programs, including adjudicating claims, administering rebates, monitoring utilization, supporting DUR processes, and overseeing and formulating preferred drug lists (PDLs).9 States may utilize PBMs in both managed care and FFS settings. The financial responsibilities PBMs take on, including negotiating prescription drug rebates with manufacturers and dispensing fees with pharmacies, have led to closer scrutiny of these arrangements and changing state policies governing PBM functions.

Within FFS delivery of pharmacy benefits, states have historically outsourced some or all of the administrative functions of the benefit and continue to do so. All responding states except one (California) reported outsourcing some or all FFS functions to one or more PBMs or other vendors as of July 1, 2019.10 The most commonly outsourced functions reported were claims payment and utilization management (Figure 2 and Appendix Table 2). Other outsourced functions mentioned by more than one state included provider call centers (Arkansas, Oklahoma, South Dakota, and Vermont) and determining AAC11 or MAC12 pricing (Indiana, Michigan, and Montana). 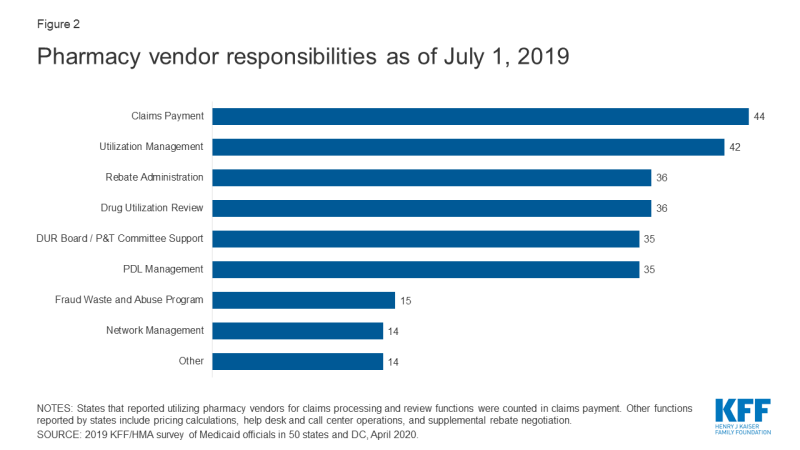 In recent years, a number of states have consolidated pharmacy administration into more streamlined contracts with a single vendor. These contracts resemble PBM contracts where the vendor has direct management responsibilities over the network, reimbursement rates, and rebate negotiations.13 Of the 44 states that reported outsourcing the claims payment function, 23 reported that their fiscal intermediary, a vendor who handles administrative functions on behalf of the state, processes pharmacy claims14 with the remaining 21 respondents reporting outsourcing to Magellan, Change Healthcare, or OptumRx to process claims.

States are taking action to prevent or monitor spread pricing within MCO-PBM contracts. Thirty-four MCO carve-in states15 responded to survey questions about spread pricing. When the payment the PBM receives from the MCO and the reimbursement amount it pays to the pharmacy differ, some PBMs have opted to keep this “spread” as profit, an issue which has generated a significant amount of political attention to MCO oversight.16 Eleven states prohibited spread pricing as of July 1, 2019; five states (Arkansas, Kentucky, Nebraska, New York and Washington) reported plans to eliminate spread pricing in FY 2020; and Maryland indicated that a spread pricing prohibition would take effect in January 2021 (Figure 3 and Appendix Table 3). Also, Pennsylvania reported plans to require MCOs to develop a process that ensures pharmacy reimbursement is sufficient to cover acquisition costs plus the cost of professional services and the cost to dispense. Twenty-six MCO states reported they will have transparency reporting requirements in place in FY 2020, including 16 states that require MCOs to provide reports to the Medicaid agency. 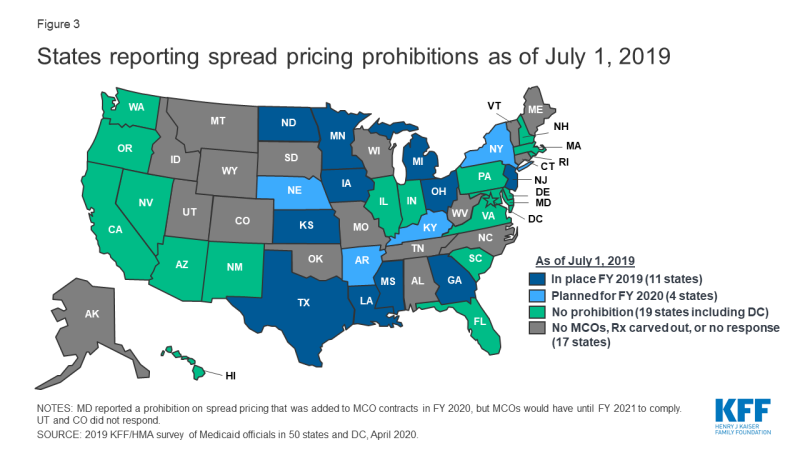 Outside of contractual prohibitions on spread pricing, very few states reported imposing other restrictions or limitations on the MCO relationship or contract with their PBM. States noted the following alternative actions:

External boards and committees also play a role in overseeing and administering the Medicaid pharmacy benefit. Section 1927 of the Social Security Act requires states to operate a DUR Board to guide drug utilization review (DUR) activities including retrospective review, application of DUR standards, and pharmacy and prescriber interventions. DUR programs also include evaluation for problems like duplicate prescriptions, incorrect dosage, and clinical misuse. Data reported to CMS shows that 48 states have conducted a review of estimated cost savings or cost avoidance of their DUR program, and CMS estimates that DUR programs save about 20%.17 States may also institute a P&T Committee to review therapeutic drug classes for PDL placement and coverage decisions, and 39 of the 50 responding states reported doing so as of July 1, 2019.18 Arizona, which operates its Medicaid program under a Section 1115 waiver, reported having only a P&T committee, but no DUR Board. MCOs may also use their own DUR Board rather than utilize the same board as the FFS agency. Federal data for federal fiscal year 2018 shows that 28 states of 36 states with pharmacy benefits carved in (including Utah which did not participate in this survey) report that at least one of their MCOs has its own DUR Board.19

Conflict-of-interest policies for DUR Boards and P&T committees are left to the states, and 10 states reported not having such a policy in place for at least one of these entities. Federal requirements for P&T committees specify they must consist of pharmacists, physicians and other “appropriate” individuals, but otherwise leave states with flexibility for determining committee operations. Of the 50 responding states, 40 reported having a conflict of interest policy for the DUR Board.20 Of the 39 states that reported having a P&T committee, 36 had in place a conflict of interest policy. Three states had no conflict-of-interest policy for either entity (Kentucky, Missouri, North Carolina).21

States vary in what functions DUR Boards and P&T committees play in administering Medicaid pharmacy benefits. DUR Boards and P&T committees may play a role in setting or reviewing utilization management tools. With the exception of review of new drugs for PDL placement which was carried out by a P&T committee in more than half the states, other activities were more evenly divided across the various entities (Table 3 and Appendix Table 4). Most states that reported “other” entities were responsible for one or more of the activities commented that more than one entity was responsible for reviews. However, Connecticut reported that step therapy criteria are developed in legislation, Louisiana reported that its DUR Board reviews prior authorization (PA) criteria developed by the University of Louisiana Monroe’s Office of Outcomes Research and Evaluation, and New Hampshire indicated that an independent medical review contractor was responsible for reviewing orphan/expedited review drugs.