About 153 million Americans rely on employer-sponsored health insurance.1 The specific benefits and services covered by those plans are shaped by many factors including costs, employer policies and beliefs, as well as state and federal regulations. A recent increase in legislative efforts at the state level to limit coverage of abortion, including in private insurance plans, could leave more women without coverage for abortion. This gap in plan benefits could have considerable financial consequences for women seeking abortion services, particularly for those who are low-income.

In addition, there are discussions in Congress about including funds in the next Coronavirus relief package to subsidize COBRA premiums for workers who lost their jobs during the COVID-19 pandemic. One of the sticking points of the debates has been whether or not the legislation will include a stipulation that federal funds cannot be used to pay for abortion coverage in employer plans, which could have implications for coverage of abortion in employer plans and the logistics of a COBRA subsidy.

Eleven states ban state-regulated private plans from including abortion coverage; most – but not all – have exceptions for pregnancies resulting from rape or incest or in cases in which it poses a threat to the life of the pregnant woman. Conversely, a handful of states have enacted policies that require coverage of abortion services in state-regulated private plans (Figure 1). However, neither the state-level abortion coverage inclusion or prohibition requirements apply to self-funded plans sponsored by private employers, which are exempt from most state insurance laws. Self-funding is common among larger employers. In total, about three out of five covered workers (59%) at private-sector firms are enrolled in a self-funded plan.2 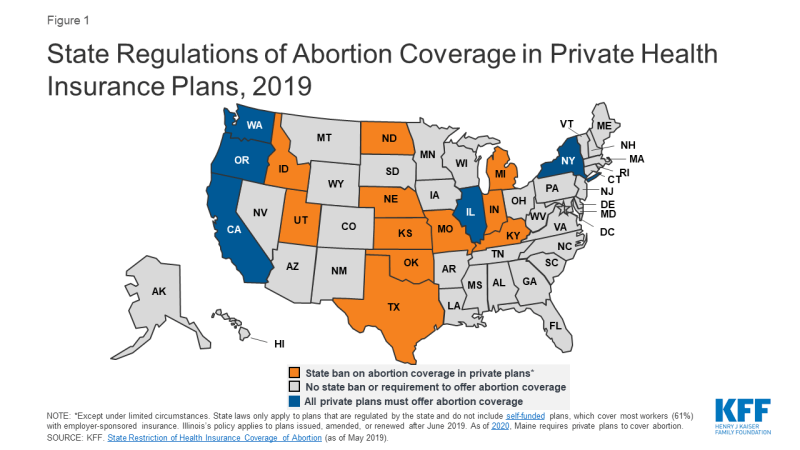 In all states (except those where abortion coverage is mandatory for fully-insured plans), employers may choose not to offer coverage for abortion, or only to cover it under limited circumstances such as in cases of rape or incest or life endangerment of the pregnant person (much like the federal law under the Hyde Amendment).

The lack of abortion coverage means that women must directly bear the full cost of the abortion. The cost of an abortion varies by the type of procedure, the location of the provider, and how far along in pregnancy it is performed. One study found that in 2011 and 2012, the average charge was $558 for a surgical abortion and $527 for a medication abortion at 10 weeks gestation. Abortions later in pregnancy can cost thousands of dollars. These costs can make abortion prohibitive for many people. According to a 2017 KFF poll, about one-third of individuals with employer-sponsored insurance (34%) would not be able to pay an unexpected medical bill of $500.

KFF conducted the annual Employer Health Benefits Survey between January and July of 2019. It included 2,012 randomly-selected, non-federal public and private firms with three or more employes. The 2019 survey asked firms that offer health insurance: “Has your firm asked your insurer or TPA3 [third party administrator] to exclude abortion coverage from your health plan?” For more information on the survey methodology, see the Survey Design and Methods section.

Exclusion of abortion coverage varies by firm size (Figure 2). Covered workers at the largest firms (5,000 or more workers) are more likely (17%) than those at smaller firms to work at a firm that excludes coverage for abortion in at least some circumstances. Only 3% of small firms (3-199 workers) and 5% of moderately sized firms (200-999 workers) specifically requested any exclusion of abortion coverage from their plan. 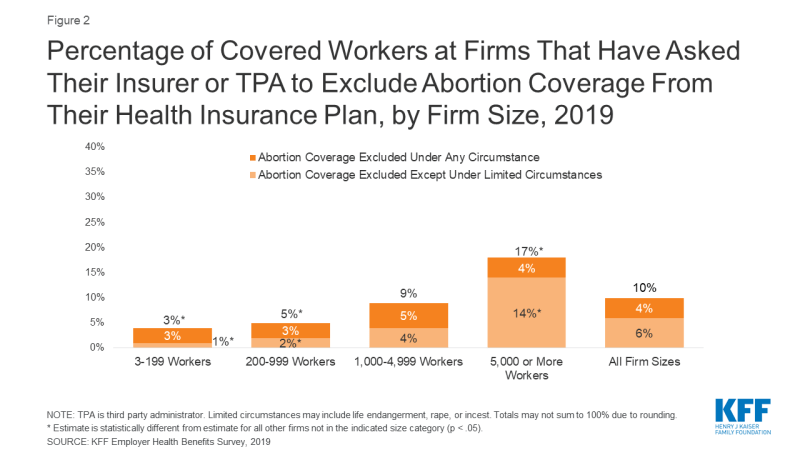 Figure 2: Percentage of Covered Workers at Firms That Have Asked Their Insurer or TPA to Exclude Abortion Coverage From Their Health Insurance Plan, by Firm Size, 2019

Exclusion of abortion coverage also varies by other firm characteristics such as ownership structure, plan funding, and firm wage level (Figure 3). Covered workers at private-not-for-profit firms (18%) are more likely than those at private for-profit firms (6%) to work at a firm that excludes coverage for abortion under some or all circumstances. Private not-for-profit firms include many large health care and educational institutions that have religious affiliations, some of which are opposed to abortion and limit insurance coverage of it in their health plans. There were approximately 1.56 million non-profits registered with the IRS5 in 2015, but they do not collect uniform information on whether non-profits are religiously-affiliated. Thirteen percent of covered workers at public employers, such as state and local governments, restrict abortion coverage in at least some circumstances. In 2019, 20 states had bans on inclusion of abortion in their public employee insurance plans except in limited circumstances; two states had bans on abortion coverage under all circumstances. While not included in the survey, health plans for federal employees follow the Hyde Amendment rule that excludes coverage of abortion except in cases of rape, incest, or life endangerment. 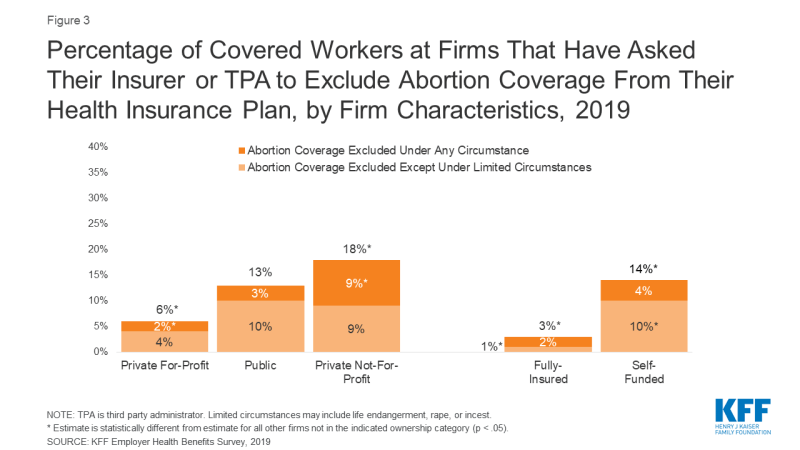 Figure 3: Percentage of Covered Workers at Firms That Have Asked Their Insurer or TPA to Exclude Abortion Coverage From Their Health Insurance Plan, by Firm Characteristics, 2019

Covered workers at firms with a completely or partially self-funded plan (14%) are more likely than those at firms with a fully-insured plan (3%) to work at firm that excludes abortion coverage under at least some circumstances. Self-funded plans established by private employers (but not public employers) are exempt from most state insurance laws, including reserve requirements, mandated benefits, premium taxes, and many consumer protection regulations. Self-funding is common among larger firms because they can spread the risk of costly claims over a large number of workers and dependents. The survey did not ask the specific reason(s) the firm chose to self-fund their plan.

Employer-sponsored health insurance is the primary source of health benefits in the U.S., covering 153 million Americans. Ten percent of covered workers are employed at a firm that has asked to exclude abortion from their health plan in least some circumstances. This percentage does not include the more than 20 million federal employees, veterans, military personnel, and dependents whose health plans contain the Hyde amendment rule excluding coverage for abortion except in limited circumstances. It also does not include private sector employees (and their dependents) whose employer did not ask for an exclusion but that reside in a state that bans abortion coverage in state-regulated plans.

Additionally, plans that do cover abortion may have restrictions on the situations in which they will pay for it, including limits on gestational age, number of abortions covered, or the method of abortion. This has been the case in individual plans that are available in some of the ACA Marketplaces in states that have not fully banned abortion coverage in private plans.

It is important to note that the survey did not ask if the firm’s plan includes abortion coverage. When this question was asked in prior years, a sizeable share of employers did not know whether their plan included coverage for abortion. In light of the extensive job loss resulting from the coronavirus pandemic, Congress is considering legislation to subsidize COBRA premiums to help unemployed and furloughed people afford to remain on their employer’s health insurance. Media reports have noted that there is bipartisan support for the subsidies, but disagreement over whether there should be a ban on subsidies that pay for abortion coverage in plans, citing the Hyde Amendment ban on federal funding of abortion. Uncertainty over whether or not an employer plan covers abortion could pose logistical challenges to the implementation of this legislation should it restrict or limit funds to health plans that include abortion coverage.

Employer-sponsored health insurance is the primary source of coverage for millions of workers in the U.S. Gaps in coverage of services effectively means that workers and their families may be required to bear the cost of that medical care. For the many workers and dependents who lack abortion coverage, these costs can translate into hundreds or thousands of dollars out-of-pocket for abortion services, placing a financial barrier to this service, particularly for low-wage workers.