The Affordable Care Act (ACA) requires most private health insurance plans to provide coverage for a broad range of preventive services, including most contraceptives for women.1  This policy was at the center of a Supreme Court case brought forward by for-profit corporations (Hobby Lobby and Conestoga) that successfully claimed that the contraceptive coverage requirement violated their religious rights. Last month, the Supreme Court agreed to hear yet another challenge (Zubik v Burwell) to the contraceptive coverage requirement, this time brought by nonprofit corporations, claiming that the accommodation established by the federal government for religiously affiliated nonprofit employers with objections to contraceptives violates their religious rights.

While the nonprofits objecting to the accommodation are publicly identified in court documents, there is no centralized source of information that tracks what share of nonprofit employers have requested an accommodation (which has been available since 2013) and are not litigating. As part of the Kaiser Family Foundation/Health Research & Educational Trust (Kaiser/HRET) 2015 Annual Employer Health Benefits Survey, a nationally representative survey of non-federal public and private employers, nonprofit employers were asked whether they self-certified as a religiously-affiliated organization to avoid paying for coverage of some or all contraceptives. This data note provides the first nationally representative estimates of the share of nonprofit corporations that have requested an accommodation from the contraceptive coverage requirement.

As part of the preventives services coverage requirements, most employers that offer health insurance are required to include coverage for contraceptives for women at no cost to them.2  The rule currently provides an “exemption” for houses of worship, which are not required to include contraceptive coverage in their employee plan, nor are their workers entitled to this coverage.  An “accommodation” is provided by the federal government to religiously-affiliated nonprofit employers with a religious objection to contraception. The policy is designed so that women workers and dependents covered by a plan sponsored by an employer electing an accommodation can have contraceptive coverage, but their employer does not have to pay for it.  Initially, the accommodation was triggered by having the religiously-affiliated nonprofit complete an EBSA 700 form to self-certify that they are an eligible organization and have a religious objection to providing coverage for some or all of any contraceptive services. The employer had to send the completed form to its insurer or third party administrator (TPA).

In July 2015, the Obama Administration issued new regulations extending the accommodation to closely held for-profit corporations (in light of the Supreme Court ruling on the Hobby Lobby case) and providing nonprofit employers eligible for the accommodation an additional choice: either to notify their insurance company or TPA or HHS about their objection. If the employer notifies HHS, they must include the contact information for their insurance company. Because the notifications go directly to insurers/TPAs or the federal government, there is no national information to date on how many nonprofits have elected the accommodation. 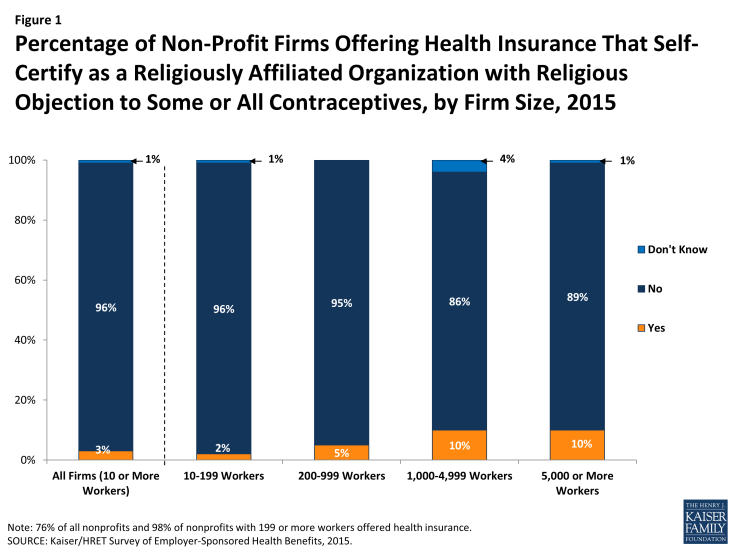 Figure 1: Figure 1Percentage of Non-Profit Firms Offering Health Insurance That Self-Certify as a Religiously Affiliated Organization with Religious Objection to Some or All Contraceptives, by Firm Size, 2015

What Firms are Likely to request an Accommodation?

Nonprofits include a diverse group of organizations, ranging from very small organizations with all volunteer staffs to large health care systems employing thousands of workers. Approximately 1.41 million nonprofits registered with the Internal Revenue Service (IRS) in 2013.3  The IRS classifies nonprofits into those who are public charities, private foundations, and other types of nonprofit organizations but does not collect uniform information on whether they are religiously affiliated. Nonprofits such as universities or health care systems that have a religious affiliation are not always identified as such – but rather are identified under their primary purpose of health or education. Nonprofits do not need their primary focus to be religious to be eligible for the accommodation.  Because of the way nonprofits are classified, there is no national estimate of the share of nonprofit corporations that have a religious affiliation.

The contraceptive coverage accommodation allows nonprofits affiliated with any religion to elect the accommodation and does not require religion to be the primary purpose of the organization. There are many nonprofit charities, educational institutions and health care providers that affiliate with the Catholic Church.  Some nonprofits may affiliate with other religions that may not necessarily object to contraceptives in concept, but rather limit their objection to certain methods, particularly IUDs or emergency contraceptive pills.  There are no data available, however, on the distribution of religiously affiliated nonprofits and their specific objections to some or all contraceptive methods.

Because of the Catholic Church’s objections to birth control4, most nonprofits affiliated with the Catholic religion are likely among those firms notifying their insurer, TPA or HHS about their objection to contraceptive coverage to obtain an accommodation. The IRS treats every Catholic-affiliated institution, such as schools, hospitals, diocesan offices, and other organizations, as separate individual entities. There are over 6,800 Catholic schools (5% of the national total5 and 22%6 of all private schools), 645 Catholic nonprofit hospitals7, and more than 160 Catholic Charities agencies across the country.8

Notably, many large nonprofits are public charities in the health or education fields. In 2011, 10% of all nonprofit hospitals were Catholic hospitals, and 10 of the 25 largest health systems in the U.S. were nonprofit Catholic-sponsored systems.9 When HHS announced the accommodation in 2013, the Catholic Health Association (CHA) announced that the accommodation was acceptable and said it would help its members implement the new policy. CHA’s membership includes over 600 Catholic nonprofit hospitals, and over 1400 nonprofit long term care and other health institutions.

There are approximately 1,700 private nonprofit colleges and universities in the US.  According to the National Center for Education Statistics IPEDS database, there are a total of 260 nonprofit Catholic institutions of higher education in the United States.  In addition, the Council of Christian Colleges and Universities has over 100 affiliate members in the United States.  Some religious universities have accepted the accommodation as a workable solution. In July 2013, Georgetown University publicly announced it was electing the accommodation.  Others, however, such as Southern Nazarene University, Geneva College, and East Texas Baptist University are among the plaintiffs in the cases that will soon be heard by the Supreme Court.

The accommodation was developed to release nonprofit religiously-affiliated employers that oppose birth control from the requirement of paying for contraceptive coverage, and still enable their employees and dependents to obtain full coverage for contraceptives directly from the insurer, as they are entitled to under the law. The Obama Administration extended this same accommodation to closely held for-profit corporations with religious objections after the Supreme Court issued its ruling on the Hobby Lobby and Conestoga cases.

The findings from Kaiser/HRET survey indicate that a minority of nonprofits have elected an accommodation to the contraceptive coverage requirement. Some nonprofit corporations with religious affiliations, however, believe that the accommodation does not sufficiently address their concerns.  These nonprofits are pursuing legal challenges to gain an “exemption” from the rule, rather than an “accommodation.” The Supreme Court’s decision for these nonprofit cases, Zubik v. Burwell, will determine if the employees of these corporations and their dependents will have no cost contraceptive coverage. For workers and their dependents, the distinction between an accommodation and an exemption is the difference between guaranteed no cost contraceptive coverage and having to pay out of pocket for services that could potentially exceed hundreds of dollars a year.

The Kaiser Family Foundation/Health Research & Educational Trust (Kaiser/HRET) 2015 Annual Employer Health Benefits Survey is based on a telephone survey of 1,997 randomly selected non-federal public and private employers with three or more workers. Researchers at HRET, NORC at the University of Chicago, and the Kaiser Family Foundation designed and analyzed the survey. National Research, LLC conducted the fieldwork between January and June 2015.  In 2015, the response rate among firms which offer health benefits is 41%

Since firms are selected randomly, it is possible to extrapolate from the sample to national, regional, industry, and firm size estimates using statistical weights. In calculating weights, we first determine the basic weight, then apply a nonresponse adjustment, and finally apply a post-stratification adjustment. We use the U.S. Census Bureau’s Statistics of U.S. Businesses as the basis for the stratification and the post-stratification adjustment for firms in the private sector, and we use the Census of Governments as the basis for post-stratification for firms in the public sector.  Firms’ ownership categories are based on respondents’ classification of their business as either “A private for-profit firm, including publically traded companies and privately owned businesses”, “A public organization such as a state or local government agency” or “A private not-for-profit, such as a 501(c)(3)”.  Many houses of worship, such as churches, characterize themselves as nonprofits in the survey.  In 2015, 15% of all firms and 22% of employers offering health benefits indicated that they were a private not-for-profit.  For more information on the Employer Health Benefits Survey, see the full survey Methods Section at https://www.kff.org/report-section/ehbs-2015-methodology/.