Medicaid continues to be the primary source of coverage for long-term services and supports (LTSS), financing over half of these services in 2018 (Figure 1). LTSS help seniors and people with disabilities with self-care, such as bathing and dressing, and household activities, such as preparing meals and managing medication. LTSS needs arise from a range of conditions, such as cognitive disabilities, like dementia or Down syndrome; physical disabilities, like multiple sclerosis or spinal cord injury; mental health disabilities, like depression or schizophrenia; and disabling chronic conditions, like cancer or HIV/AIDS.1 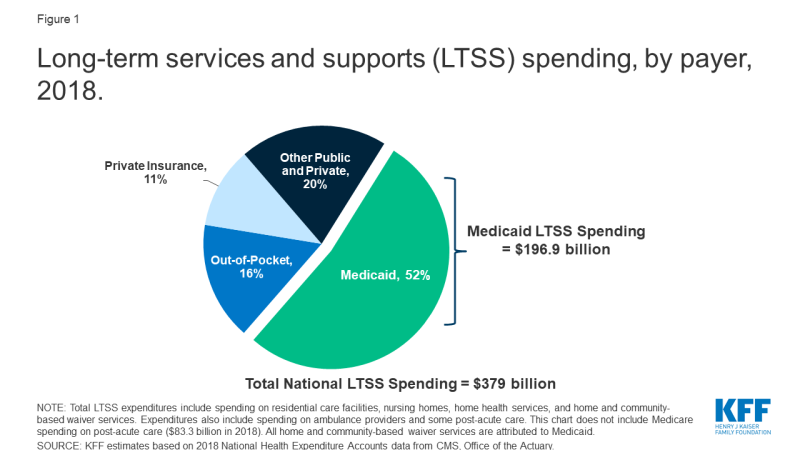 State Medicaid programs must cover LTSS in nursing homes, while most home and community-based services (HCBS) are optional.2 Spending on HCBS surpassed spending on institutional care for the first time in 2013, and comprises 57% of total Medicaid LTSS spending as of 2016 (Figure 2). Factors contributing to this trend include beneficiary preferences for HCBS, the fact that states are encouraging HCBS as an alternative to typically more costly institutional care, and states’ community integration obligations under the Americans with Disabilities Act and the Supreme Court’s Olmstead decision. In Olmstead, the Supreme Court held that the unjustified institutionalization of people with disabilities is illegal discrimination and violates the Americans with Disabilities Act. 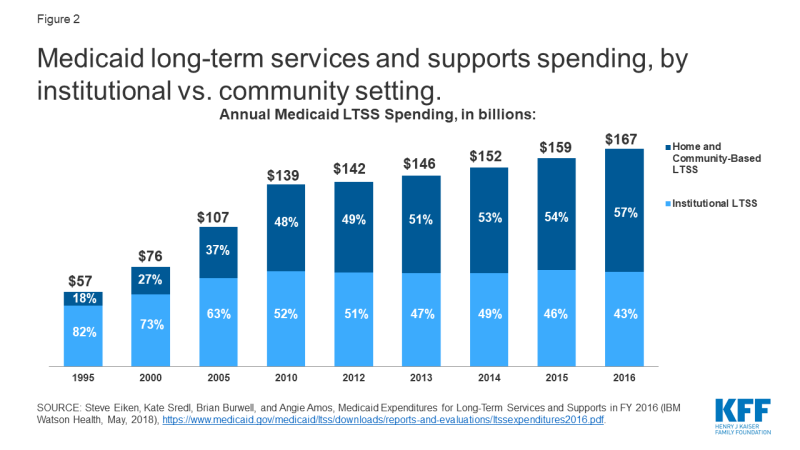 This issue brief presents the latest (FY 2018)3 state-level Medicaid HCBS enrollment and spending data from KFF’s 18th annual survey of all 50 states and DC. The survey tracks Medicaid HCBS across four types of state plan benefits and two types of waivers, which are described in more detail in Table 1,4 and also presents enrollment and spending by target population where relevant. In general, state plan benefits are provided to all Medicaid beneficiaries for whom they are medically necessary. Waivers allow states to provide services to specific populations, set enrollment caps, and expand income and asset limits. State plan HCBS include home health; personal care; Section 1915 (i), which authorizes HCBS targeted to a particular population with functional needs that are less than an institutional level of care; and Community First Choice (CFC) attendant services and supports. HCBS waivers include Section 1915 (c) and Section 1115,5 both of which allow states to expand financial eligibility and offer HCBS to seniors and people with disabilities who would otherwise qualify for an institutional level of care, while limiting enrollment.6 The Appendix Tables contain detailed state-level data. A related brief presents the latest data and highlights themes in state HCBS policies.

HCBS Enrollment and Spending by Authority

Nearly all HCBS are provided at state option. Home health state plan services are the only HCBS that are required for states participating in Medicaid, covering 616,800 enrollees. Among the optional HCBS authorities, waivers continue to be the most commonly used. While some states have taken up Section 1915 (i) and/or CFC, these relatively newer state plan options have not supplanted waivers as the primary authority through which HCBS are provided. Personal care services are the most commonly used HCBS state plan option, offered in 34 states (Figure 3 and Appendix Table 1). 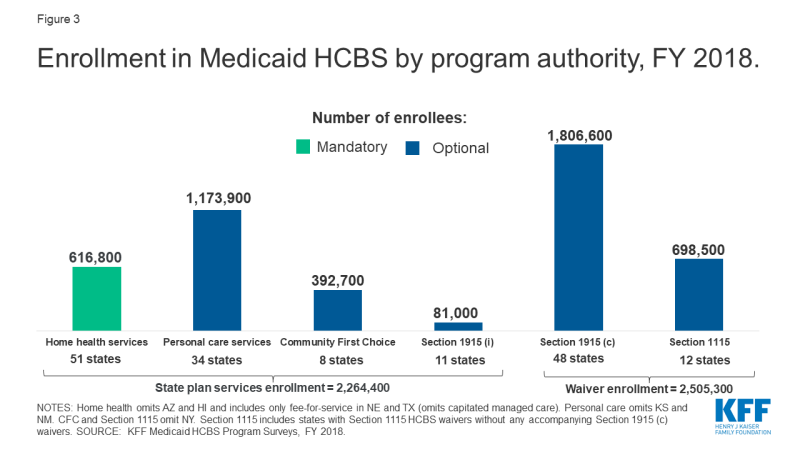 HCBS enrollment under a state plan authority is slightly less than enrollment under a waiver authority (2.3 million vs. 2.5 million) (Figure 3). Total HCBS enrollment across all authorities is not presented as individuals may receive services under more than one authority. For example, in some states, an individual could receive some personal care hours through the state plan option and additional personal care hours through a Section 1915 (c) waiver. States can choose to allow enrollees to self-direct their personal care and/or home health services. Box 1 contains enrollment data for those services. 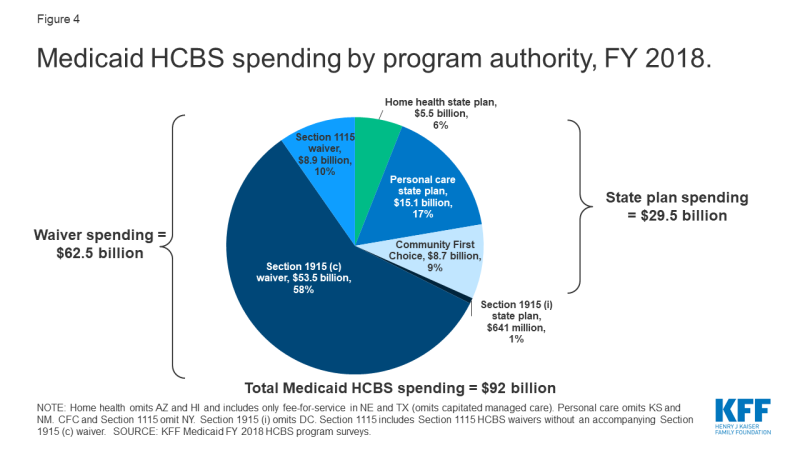 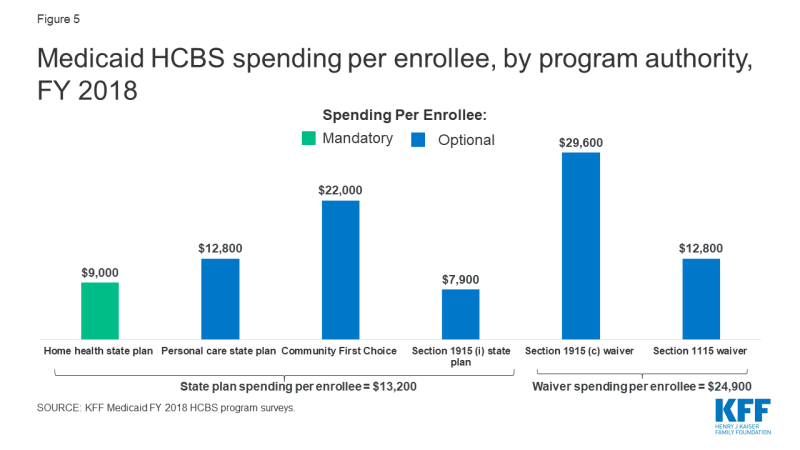 Enrollment and spending increased in each HCBS authority from FY 2017 to FY 2018, except home health state plan services (Table 2).19 The two authorities with the largest percent increases in total spending were CFC and personal care state plan services; spending increases in these authorities appear to be driven by increased per enrollee costs rather than by increased enrollment. Notable state-level changes from FY 2017 to FY 2018 include the following: 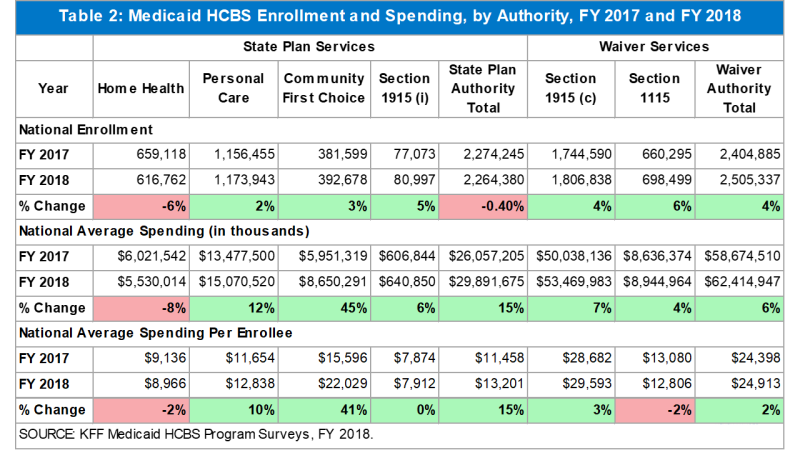 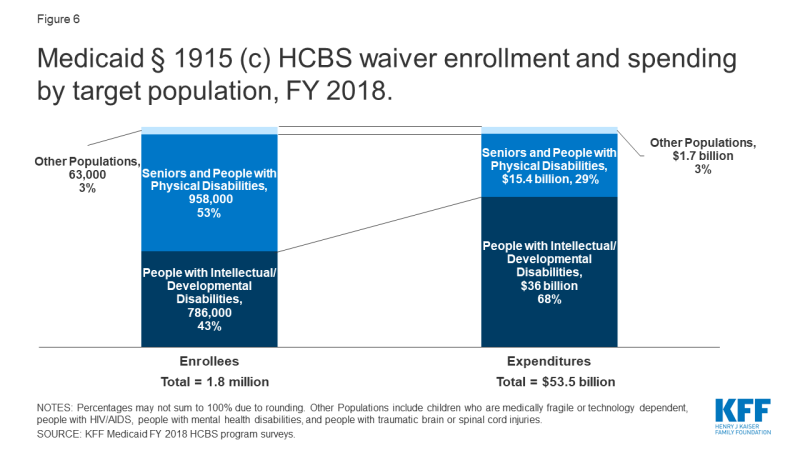 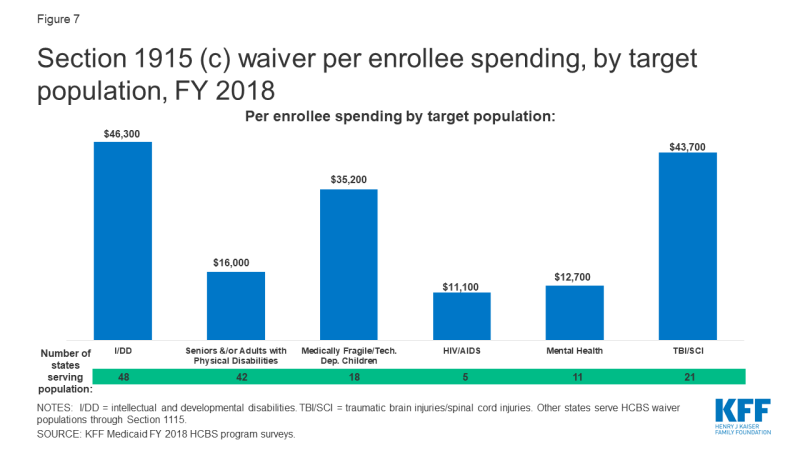 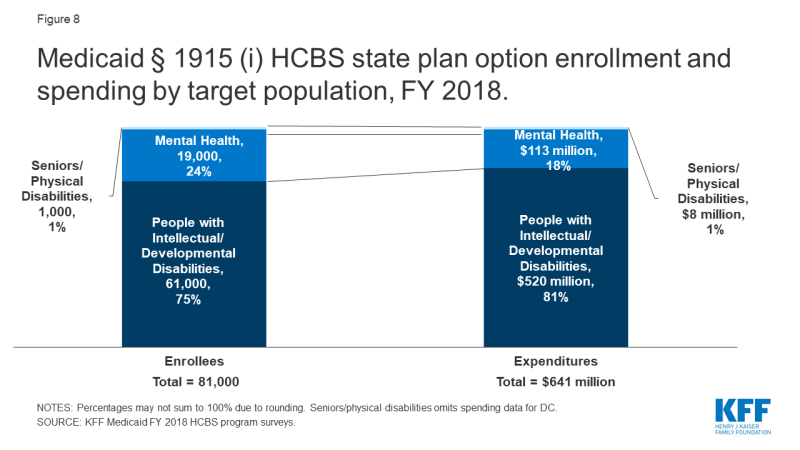 Medicaid HCBS enrollment ranges from 81,000 individuals receiving Section 1915 (i) state plan services to 1.8 million individuals receiving Section 1915 (c) waiver services, with joint federal and state spending across all HCBS authorities totaling $92 billion in FY 2018. Medicaid HCBS promote independence and self-determination for seniors and people with disabilities and chronic conditions by enabling them to receive assistance with self-care needs and household activities outside an institution. Medicaid provides substantial federal funding to help states meet their community integration obligations under Olmstead and the Americans with Disabilities Act.

Most HCBS enrollees receive services provided through an optional authority, and nearly all HCBS spending is devoted to authorities provided at state option. Although home health state plan services are the only HCBS that states participating in Medicaid must offer, all states elect at least one optional HCBS authority. While nearly all Medicaid HCBS authorities are optional, Medicaid fills a gap by covering HCBS that are typically not available through private insurance or Medicare, and not affordable for many paying out-of-pocket, especially those with lower incomes. The optional nature of most HCBS results in substantial variation across states in enrollment and spending, reflecting states’ different choices about optional authorities, benefit package contents, and scope of covered services. States would lose some of their existing optional HCBS authorities and flexibility if the entire ACA ultimately is struck down in Texas v. Azar.33 Specifically, the option to offer CFC services would cease to exist, as would provisions that provide states with the flexibility to offer the current full scope of Section 1915 (i) services and to target those services to specific populations.34

The optional nature of most HCBS has implications for federal and state spending, especially during economic recessions. States face increasing pressures from revenue shortfalls during times of economic downturn. Optional Medicaid eligibility pathways and services, including HCBS, may be at risk for cuts as states must make difficult choices to balance their budgets.35

The 2020 elections also could have important implications for Medicaid and HCBS as policymakers may consider a range of proposals that could affect these populations and services. At one end of the spectrum, a Medicaid program-wide federal financing cap is proposed in President Trump’s FY 2020 budget, though efforts to repeal and replace the ACA and cap federal Medicaid funding through a block grant or per capita cap were narrowly defeated in Congress in 2017.36 In addition, Tennessee has submitted a proposal to CMS that seeks capped federal Medicaid funding through a Section 1115 waiver pursuant to state legislation that includes some seniors, nonelderly adults with physical disabilities, and children and adults with I/DD receiving HCBS.37 Depending on how they are structured, policies that would cap federal Medicaid funding could affect coverage, services, provider payment rates, and access to care for vulnerable populations.

At the other end of the policy spectrum, continued attention to Medicaid HCBS enrollment and spending is important to understanding proposals from some Democrats to create a single, federal, universal health insurance program known as Medicare-for-all. One of the most fundamental changes under Medicare-for-all would be uniform coverage of community-based long-term care services for all Americans. The current Medicare-for-all proposals would require and explicitly prioritize HCBS over institutional services, eliminating the state variation in eligibility, benefits, and payment and delivery systems that exists today under Medicaid, while also shifting responsibility for designing and implementing much of health policy from states to the federal government.38

While the economy, the litigation challenging the ACA, and the upcoming election all will have implications for Medicaid and HCBS, changing demographics also will result in increased pressure for states to meet the health and LTSS needs of a growing elderly population in the coming years. The number of adults age 65 and older is expected to more than double in size between 2014 and 2060, with the largest increase during this period (18 million) expected in this decade, from 2020 to 2030.39 With the aging of the baby boomers, one in five U.S. residents will be age 65 or older by 2030,40 and for the first time in U.S. history, older adults are projected to outnumber children by 2034.41 All of these factors make continued attention to Medicaid’s role in providing HCBS an important policy area to watch.