Demand for consumer assistance sometimes exceeded capacity, though less so than last year. For the second Open Enrollment period overall, 19% of Assister Programs said they could not help all who sought assistance. (Figure 15) In the final weeks of Open Enrollment, 22% of Programs said they had to turn at least some consumers away. This contrasts with 37% of Programs that were stretched beyond capacity overall during year one, and nearly half that had to turn away at least some consumers during the final weeks. 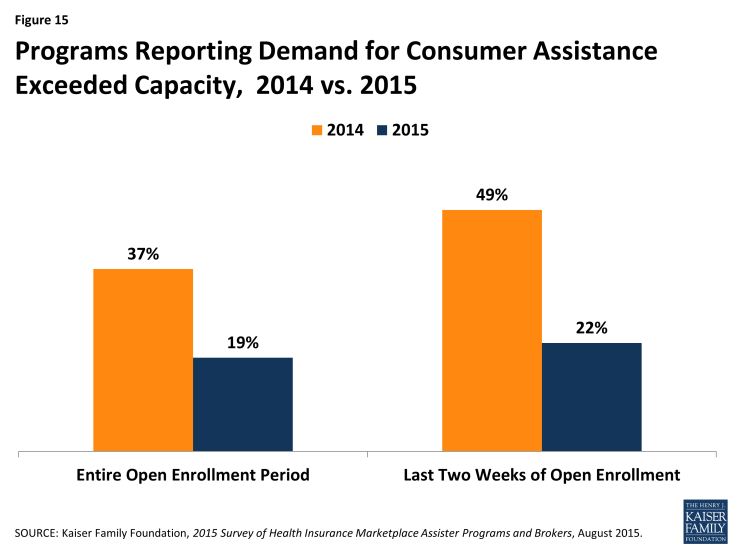 The shift in capacity relative to demand during the final weeks of Open Enrollment may be due to the fact that half of Marketplace enrollees this year were re-enrolling for a second year. In order to maintain continuous coverage on January 1, 2015, consumers had to re-enroll by mid-December. In addition, half of returning enrollees elected the auto-renewal option for 2015.

With respect to Marketplace consumer assistance capacity overall, it may be that capacity is coming more into alignment with the demand for help for many Assister Programs, though a significant number of Programs still are being asked for more help than they have capacity to provide.

Client continuity was low. Returning Assister Programs were asked approximately how many consumers they helped during the second Open Enrollment were returning clients they had helped the year before. Two-thirds of Programs responded that most to nearly all of the consumers helped this year were new. (Figure 16) 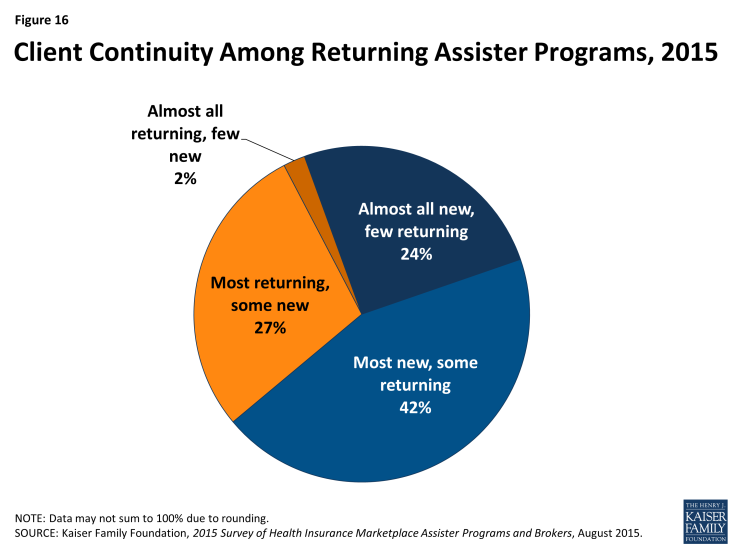 FQHCs were somewhat more likely to have an ongoing relationship with clients from year one. Over a third of FQHCs reported most clients they helped during the second open enrollment period were returning compared to less than a quarter of Navigators and CACs. In many Marketplaces, rules governing retention of identifiable personal information may have limited Programs’ ability to follow up with consumers. Also, some consumers who needed help enrolling in year one may not have needed help in year two. In addition, many Programs still focus heavily on outreach and assistance to uninsured consumers. As more consumers gain coverage, the extent to which ongoing relationships develop between consumers and Assisters remains to be seen.

Reported shortcomings in available health plan information hindered the ability of Assister Programs to help consumers evaluate QHPs in some cases. Assister Programs continue to report that at least some of their clients who considered QHPs had questions about plans that weren’t answered by information on the Marketplace website. However, the number of Programs indicating this was often or almost always the case declined to 31% this year, compared to 41% last year. (Figure 17) 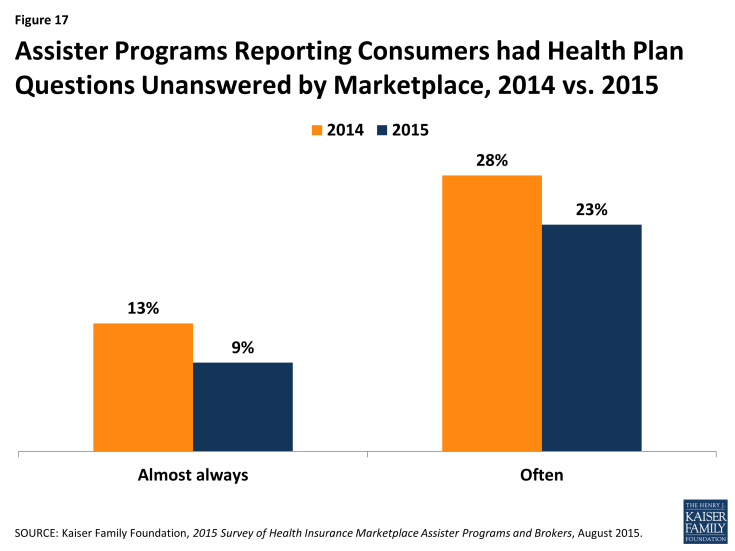 Respondents also report that insurers selling coverage in the Marketplace tend not to offer training on their health plans to Assister Programs; 74% of Programs say few or none of the insurers in their Marketplace do so.

Most Assister Programs help clients apply for Medicaid and CHIP, but completing these applications often took multiple visits. Under the ACA, Marketplaces must provide a single streamlined application process for individuals seeking financial assistance, whether through premium tax credits and cost sharing subsidies for QHPs or through Medicaid and CHIP. In many states so far, though, including most FFM states, Marketplace IT systems are not sufficiently integrated with Medicaid to seamlessly transfer applications and enroll eligible individuals in a single transaction. Instead, when the Marketplace assesses an individual is likely eligible for Medicaid or CHIP, that person must often make a separate application to the state Medicaid agency, re-entering information already submitted to the Marketplace.

Most Programs said they will help consumers file a separate application for Medicaid or CHIP, while 30% refer consumers to another Assister Program or to apply on their own. (Figure 18) When Programs do help, 55% said the separate Medicaid application could usually be completed during the same appointment, while the rest said that it typically took multiple visits to help the client complete the transaction with Medicaid. (Figure 19) 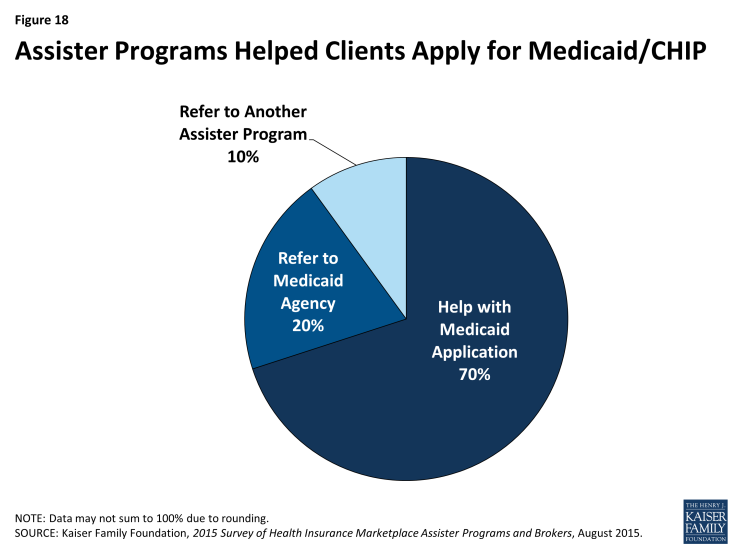 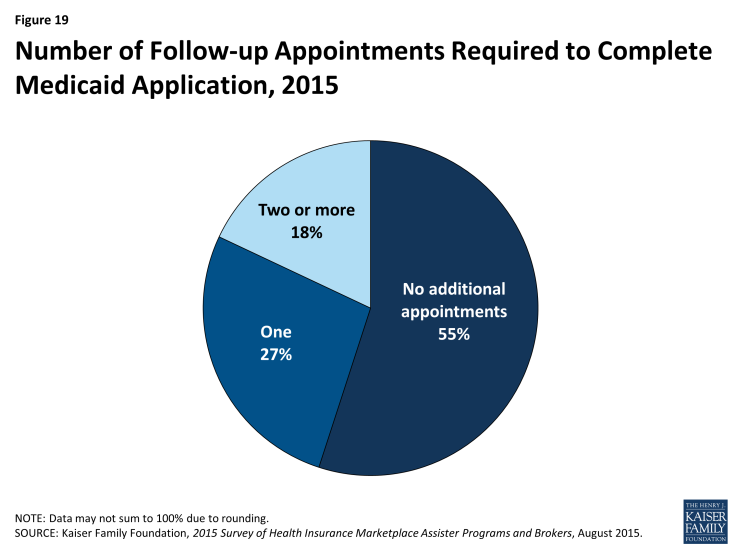 Call Center technical support was uneven. Last year Programs reported that technical support from Marketplace call centers was not always effective. Last year Programs also listed types of consumer problems that could be especially difficult to resolve, including the need for translation services, immigration-related questions, tax-related questions, and help understanding QHP choices. This year, the survey asked Programs how often they turned to Call Centers for technical assistance when consumers presented with these types of problems and, when they did, how often they found Call Center technical assistance to be effective. (Table 6)

Last year, Assisters in some SBM states reported they had access to dedicated staff at the Marketplace Call Center who could expedite service and help resolve more complex questions. This year the FFM launched a dedicated help center for Assister Programs called the Assister Help Resource Center (AHRC). The new center was launched on a test basis in a few states after Open Enrollment began and was available for all FFM Assisters by the end of Open Enrollment. The AHRC was operated separately from the FFM Call Center and offered policy-related technical assistance (e.g., explaining eligibility rules for immigrants) but no application assistance (e.g., AHRC staff could not check on the status of an application or re-set a password). Survey respondents this year were not asked about the AHRC.

Most Assister Programs reported they would like additional training on specific issues. All Assister Program staff must complete initial training to be certified by Marketplaces, and returning staff had to be recertified to work in year two. In FFM and FPM states, Navigators were required to complete 30 hours of federal training, while CAC Assisters had to complete at least 5 hours of federal training. Depending on the applicable training curriculum, topics include eligibility standards for financial assistance, initial and renewal application procedures, and general standards for qualified health plans. In addition, during the year, Marketplaces may offer supplemental training. The FFM, for example, publishes a weekly newsletter for Assisters with updates on various topics. CMS also hosts periodic webinars to provide additional information during the year. Participation by Assisters is voluntary.

Nearly all Assister Programs (86%) indicated they would like additional training on a range of complex issues. Last year, more than 90% of Assister Programs indicated additional training would be helpful. Topics for which further training is desired are similar to those identified last year, except that further training on renewing health coverage and subsidies is new on the list this year. (Figure 20 and Appendix Table A3) 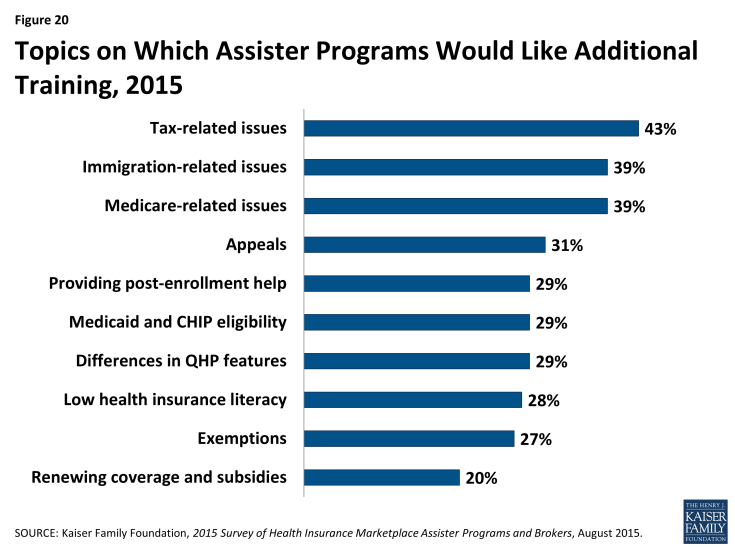 Figure 20: Topics on Which Assister Programs Would Like Additional Training, 2015 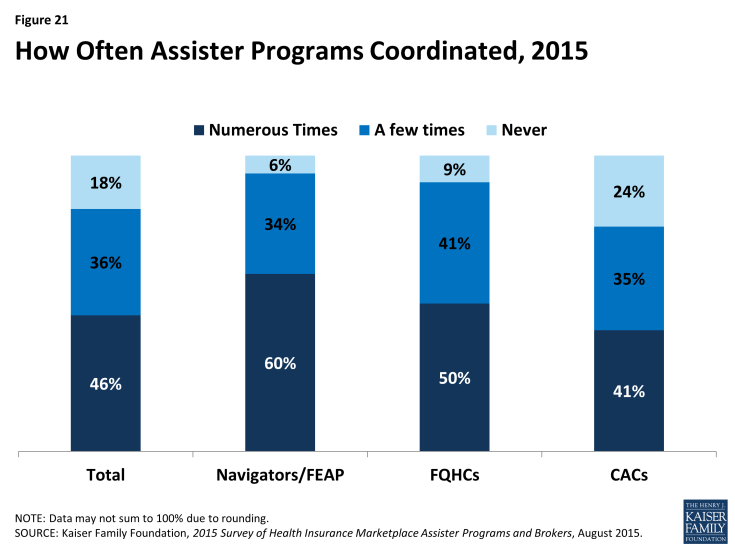 Coordination was most often initiated by Assisters themselves or by an outside third party. Nine percent of Programs say the Marketplace facilitated coordination, though in SBM states, it was 19%. When Marketplaces did help Programs coordinate, this was most often the case for Navigators. (Table 7) Most FQHCs receive coordinating help from their state Primary Care Associations, which receive separate HRSA grants to support FQHC Assisters.