Malaria is one of the world’s most common and serious tropical diseases, with about half the world’s population at risk of being infected with malaria. Although preventable and treatable, malaria causes significant morbidity and mortality, with the greatest numbers of cases and deaths in resource-poor regions and among young children.2

Malaria: an infectious disease caused by certain Plasmodium parasites, which are transmitted to humans by Anopheles mosquitoes. This mosquito thrives in warm, tropical, and subtropical climates. Infection with malaria parasites can cause common symptoms like fever, chills, and flu-like illness and lead to anemia, causing severe malaria disease and sometimes death. When the infected parasites clog small blood vessels in the brain, causing cerebral malaria, it can also be fatal.3

Strategies and efforts to address malaria have evolved over time, with global eradication efforts waning in the 1970s, resulting in rising rates.4 More recently, in the late 1990s, malaria began to receive renewed attention, particularly after the 1998 creation of the Roll Back Malaria Partnership (RBM).5 In 2000, all nations agreed to global malaria targets as part of Millennium Development Goal 6 (combat HIV/AIDS, malaria, and other diseases). Since then, expanded efforts by the U.S. government, other donor governments, multilateral institutions, and affected countries have helped to increase access to malaria prevention and treatment and reduce cases and deaths,6 and there has been growing discussion of the possibility of finally eradicating the disease.7

Today global malaria activities are focused on sustaining, improving, and expanding efforts to control the disease. Still, progress has stalled in many countries recently, and significant challenges continue to complicate malaria control efforts in hard-hit areas.

Substantial scale-up of malaria interventions helped reduce the malaria case incidence and death rates by 19% and 39%, respectively, between 2010 and 2018. Still, the World Health Organization (WHO) estimates that there were approximately 228 million cases of malaria and 405,000 deaths, mostly among children under the age of five, in 2018 (see Table 1).

Nearly half of the world’s population is at risk of malaria.10 Sub-Saharan Africa is the hardest hit region in the world, followed by South-East Asia. Many challenges continue to complicate malaria control efforts in countries with ongoing malaria transmission, including poverty, poor sanitation, weak health systems, limited disease surveillance capabilities, natural disasters, armed conflict, migration, climate change, and the presence of counterfeit and/or sub-standard antimalarial drugs.11

Multidrug-resistant malaria is a widespread and recurring problem, and while highly-effective artemisinin-based combination therapies (ACTs) have been introduced to treat drug-resistant strains, evidence suggests ACT resistance is occurring in parts of Asia.12 Resistance to insecticides has emerged as a problem in Africa, the Americas, Eastern Mediterranean, South-East Asia, and the Western Pacific.13

While anyone living in or visiting an endemic country may be at risk, approximately 1 billion people are at high risk of malaria infection, and certain groups, particularly pregnant women14  and children, are more vulnerable. Making up 67% of all malaria deaths, children under five are especially at-risk of malaria infection, because they lack developed immune systems to protect against the disease.15 Other high-risk groups include people living with HIV/AIDS, travelers, refugees, displaced persons, and migrant workers entering endemic areas.16

Malaria control efforts involve a combination of prevention and treatment strategies and tools, such as:

Additionally, while a malaria vaccine is not yet available, clinical trials are underway, and early results show promise.19

Access to prevention and treatment services has grown over time.20 In recent years, the number of ACT treatments procured by the public and private sectors has expanded substantially.21 Similarly, access to and use of ITNs has increased significantly and coverage of IPTp has been increasing. Nonetheless, gaps remain, with ITN coverage at a standstill since 2016 and IPTp coverage still limited.22

Since the late 1990s, new initiatives and financing mechanisms have helped increase attention to malaria and contributed to efforts to achieve global goals; these include:

These and other efforts work toward achieving major global malaria goals that have been set through:

Adopted in 2015, the Sustainable Development Goals (SDGs) aim to end the malaria epidemic by 2030 under SDG Goal 3, which is to “ensure healthy lives and promote well-being for all at all ages.”24 The SDGs are the successor to the Millennium Development Goals (MDGs), which included a malaria target under MDG 6: to halt and begin to reverse the incidence of malaria by 2015.25

Developed in close alignment with RBM and adopted by the World Health Assembly in 2015, the Global Technical Strategy for Malaria (GTS) includes the goals of:

With these goals, the GTS sets out a vision for countries to accelerate progress towards malaria elimination, and globally, more countries are moving towards elimination. Since 2015, six countries (Algeria, Azerbaijan, Kyrgyzstan, Paraguay, Sri Lanka, and Tajikistan) have attained three consecutive years of zero indigenous malaria cases and are therefore recognized as having eliminated the disease.26 In 2018, of 89 malaria-endemic countries, 49 countries worldwide were reported to have been nearing elimination.27

The U.S. government’s international response to malaria began in the 1950s through activities at the U.S. Centers for Disease Control and Prevention (CDC) and what is now the U.S. Agency for International Development (USAID); early efforts focused on technical assistance but also included some direct financial support for programs overseas.

Since the early 2000s, the U.S. has assigned a heightened priority to and provided greater funding for bilateral and multilateral malaria efforts. In 2003, the U.S. Leadership Against HIV/AIDS, Tuberculosis, and Malaria Act of 2003 (the legislation that created PEPFAR, the expanded U.S. government response to global AIDS) authorized five years of funding for bilateral malaria efforts and the Global Fund. In 2005, the U.S. launched the President’s Malaria Initiative (PMI), a five-year effort to address malaria in 15 hard-hit African countries, which has since been extended and expanded. In 2008, the Lantos-Hyde U.S. Global Leadership Against HIV/AIDS, Tuberculosis, and Malaria Reauthorization Act of 2008 (which reauthorized PEPFAR) authorized another five years of funding and codified the position of the U.S. Global Malaria Coordinator.29 More recently, in 2015, the U.S. released the President’s Malaria Initiative Strategy 2015-2020, which outlines its goals as well as its approach to achieving them by 2020.

Launched in 2005, the President’s Malaria Initiative (PMI) is an interagency initiative to address global malaria that is led by the U.S. Agency for International Development (USAID) and implemented in partnership with CDC. It is overseen by the U.S. Global Malaria Coordinator, who is appointed by the President and reports to the USAID Administrator, and an Interagency Advisory Group made up of representatives from USAID, CDC, the Department of Defense (DoD), the State Department, the National Security Council, and the Office of Management and Budget. USAID serves as the lead implementing agency for U.S. global malaria efforts, primarily though PMI, with other agencies also carrying out malaria activities. Collectively, U.S. bilateral activities reach approximately 30 countries.31

The strategy also states that these efforts contribute to longer term goals, such as elimination of malaria in a growing number of countries and global eradication by 2040-2050.33

USAID and CDC’s PMI activities focus on expanding access to and the use of six key malaria control interventions:

They also include a range of malaria control activities, including technical assistance to affected countries, monitoring and evaluation, supply chain management, and commodity procurement (since the start of PMI, U.S. support for commodities, such as ITNs, insecticides, and antimalarial drugs, like ACTs, has increased significantly37). Additionally, PMI supports activities in the following areas: behavior change communication, health systems strengthening, monitoring and evaluation, and operational research.

USAID also supports regional efforts in Latin America and the Caribbean, including providing technical assistance to support countries in tailoring their approaches for malaria control through its Amazon Malaria Initiative.38 CDC provides technical assistance to these regional efforts and has also been designated as the WHO Collaborating Center for Prevention and Control of Malaria.39

Additionally, the National Institutes of Health (NIH) and DoD are involved in malaria research and development (R&D). NIH is the lead agency for U.S. malaria R&D efforts (including its International Centers of Excellence for Malaria Research program, which established a global network of malaria research centers in 2010 to support research activities in malaria-endemic countries).40 DoD also supports extensive R&D efforts as well as worldwide malaria disease surveillance, and technical assistance and capacity building with local partners.41

Both USAID and CDC station staff in each PMI focus country. 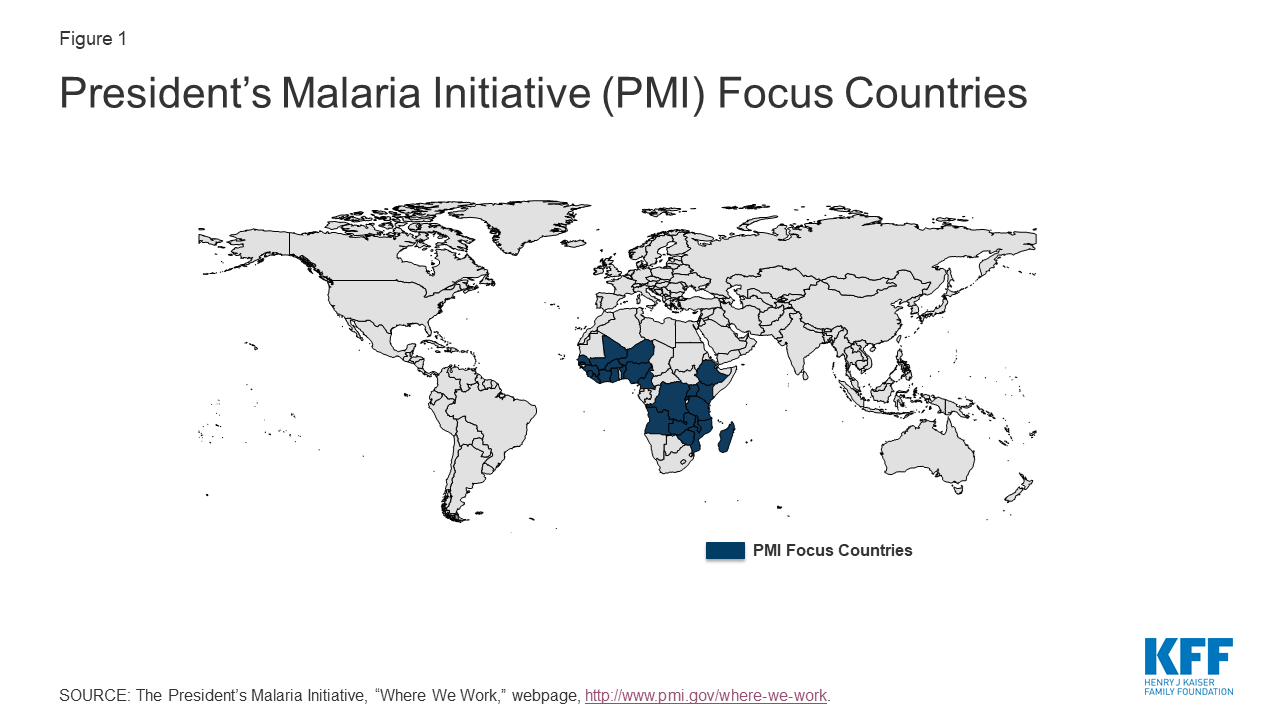 The U.S. partners with international institutions and supports global malaria funding mechanisms. Key partners include the World Health Organization, the Roll Back Malaria Partnership, and the World Bank. Additionally, the U.S. government is the largest donor to the Global Fund, which has approved over $14 billion in funding for malaria programs worldwide and is the largest overall funder of global malaria efforts.45

U.S. bilateral funding for malaria, which includes support for PMI as well as other malaria control efforts and research activities, has increased from $146 million in FY 2001 to $999 million in FY 2020 (see Figure 2). The current Administration has proposed reduced malaria funding for FY 2021 ($905 million).

The majority of U.S. malaria funding is directed to PMI focus countries, with additional funding directed to other bilateral and regional malaria efforts as well as malaria research activities. 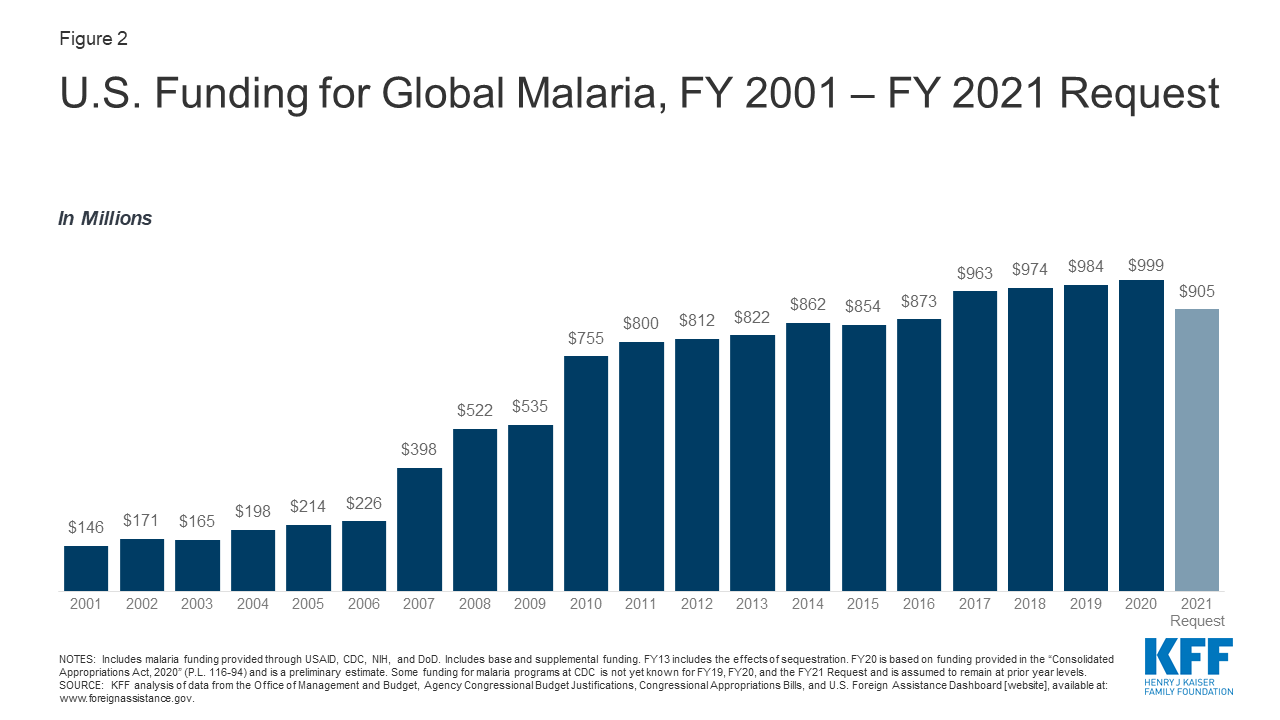 Over the past decade, U.S. global malaria control efforts and funding have expanded, as have those of others. Looking ahead, there are several issues and challenges facing U.S. global malaria efforts, starting with questions about the extent to which the current Administration will continue to support ongoing efforts, particularly in light of its budget proposal to reduce malaria funding. Additionally, as the coronavirus continues to spread globally, there is growing concern over its impact on global malaria efforts, including the potential impact on malaria services and potential disruptions in the supply chain for essential drugs. As global efforts work toward achieving malaria elimination in a growing number of countries, key issues and challenges for PMI and other U.S. malaria efforts going forward include: