Data Note: Is the Supplemental Title X Funding Awarded by HHS Filling in the Gaps in the Program?

The Title X Program, the only federal program dedicated to supporting the delivery of family planning services to low-income individuals, has undergone significant changes over the past year. On March 4, 2019, the Trump Administration finalized new regulations that made major changes to the program, prohibiting grantees from providing abortion referrals, mandating referrals to prenatal services for all pregnant patients, and requiring complete financial and physical separation from abortion services. (Title X funds have never been permitted to pay for abortions). Eighteen of the 90 grantees across the United States have formally withdrawn from the Title X program because they did not want to comply with the new regulations and while the state of Hawaii has not formally withdrawn from the program, it is not currently drawing down Title X funds.

The Office of Population Affairs (OPA), the federal agency that oversees the Title X program, recently announced the availability of $33.6 million in fiscal year 2019 supplemental funding awards to the grantees still participating in the program. Sixty-nine percent (50 grantees) of the remaining grantees in 35 states, D.C., and 4 U.S. territories were awarded these supplemental funds (Figure 1). The majority (83%) of the grantees that received additional funding were located in states that have either not had any changes to their Title X program, or lost less than 1/5 of their network. OPA stated in its release that these supplemental awards “prioritize filling service gaps left by the grantees that chose to leave the Title X program.” The amount of the surplus that OPA has available for the program has not been disclosed, but the sum of the funds initially awarded on April 1, 2019 to the 18 grantees that withdrew from the Title X program is $52.2 million. However, some of this funding may have been spent between April 1, 2019 and when they formally withdrew this summer. 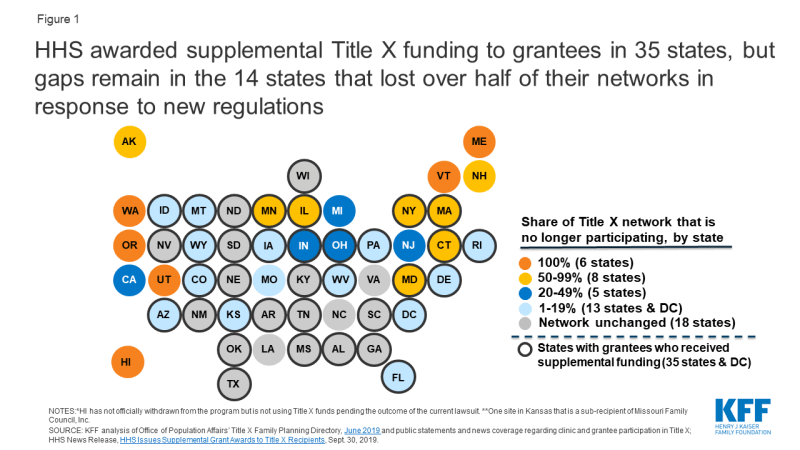 Figure 1: HHS awarded supplemental Title X funding to grantees in 35 states, but gaps remain in the 14 states that lost over half of their networks in response to new regulations

Among the 35 states and DC with grantees that received the supplemental funding, none of the grantees in 16 states (AL, AR, FL, GA, KS, KY, MS, NE, ND, NM, OK, SC, SD, TN, TX, WI) have withdrawn from the Title X program. In these states, they may be using the additional funding to expand their networks and provide more services at the existing sites, but the funds allocated to these states are not addressing gaps that were left by the grantees that left the Title X program.

The extent to which these supplemental funding awards will fill gaps in other states is not clear, but it appears that many gaps remain. No funding went to the five states (ME, OR, UT, VT, WA) whose only grantee has left the Title X program. Additionally, although they have not formally withdrawn from Title X, none of the family planning clinics in Hawaii are currently using Title X funds and did not receive supplemental funding. Of the eight states that have lost between 50% to 99% of their Title X network, six received additional funding- CT, IL, MD, MA, MN, NY (AK and NH did not receive additional funding) (Table 1). In these states, the largest grantee representing the majority of the network has withdrawn, leaving only the smaller grantees. It is unlikely that, even with the supplemental funding, these small grantees will have the capacity to offset the reduction in providers to deliver services to replace the lack of funding that historically has supported the larger grantee.

Over 90% of Title X clinics have withdrawn from the program in New York, Illinois and Maryland, leaving one small grantee to fill the gaps

New York, Illinois, and Maryland are examples of three states where the smaller grantee that received supplemental funding would have to significantly increase its network to fill the gaps left by the larger grantee that withdrew.

New York: The state of New York previously had four grantees that participated in the Title X program supporting 180 sites, but is now left with two small grantees, one of which received supplemental funding, The Floating Hospital, Inc. The Floating Hospital has three clinic locations, two of which are in Long Island City and one is in Astoria, New York (Figure 2). The other grantee, Beacon Christian Community Health Center, did not receive supplemental funding. 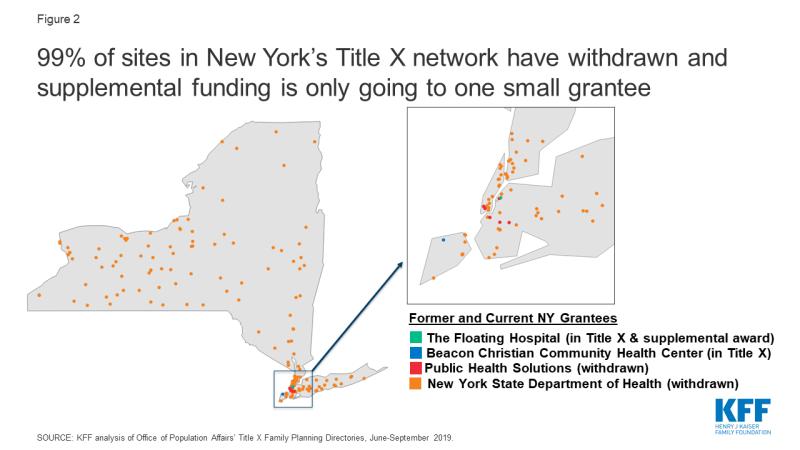 Figure 2: 99% of sites in New York’s Title X network have withdrawn and supplemental funding is only going to one small grantee 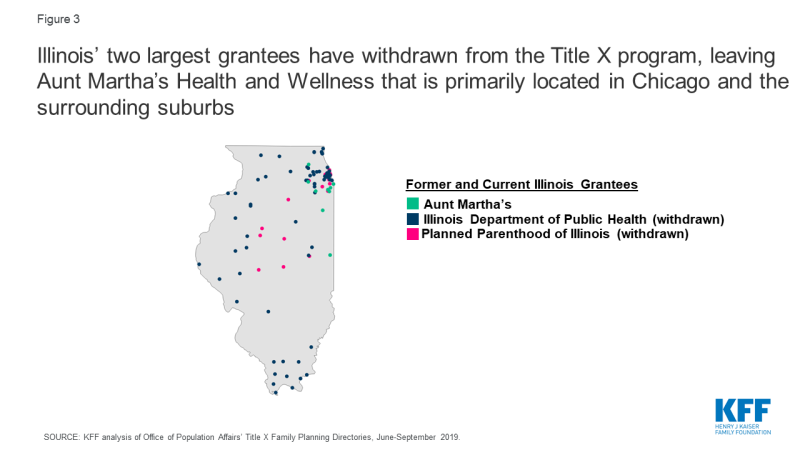 Figure 3: Illinois’ two largest grantees have withdrawn from the Title X program, leaving Aunt Martha’s Health and Wellness that is primarily located in Chicago and the surrounding suburbs 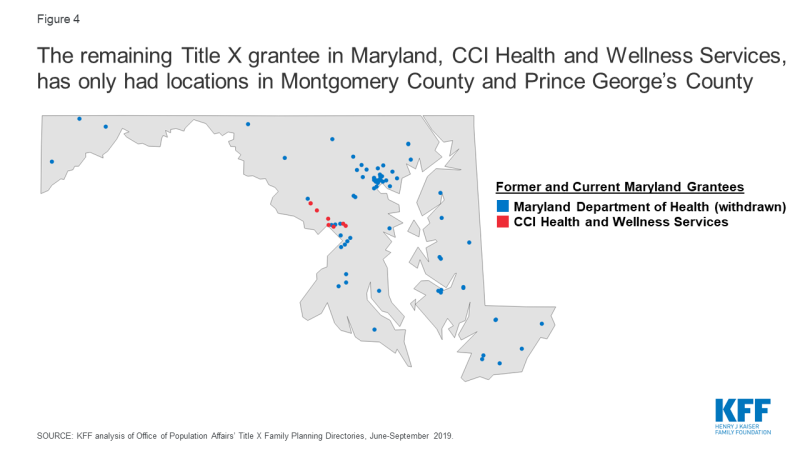 Figure 4: The remaining Title X grantee in Maryland, CCI Health and Wellness Services, has only had locations in Montgomery County and Prince George’s County

Massachusetts, Minnesota, and Connecticut have lost over 50% of their networks but the remaining grantee in the state received supplemental funding. Those grantees have had limited geographic coverage across the state (Figure 5). 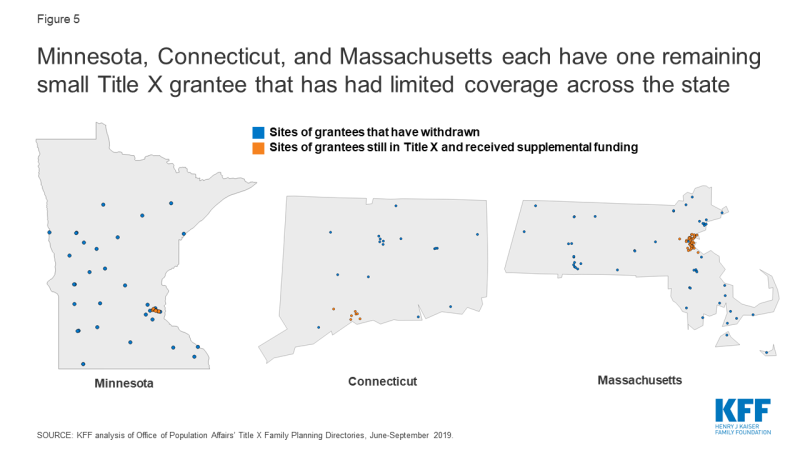 Figure 5: Minnesota, Connecticut, and Massachusetts each have one remaining small Title X grantee that has had limited coverage across the state

Massachusetts: The remaining grantee in Massachusetts, Action for Boston Community Development has only had locations in Boston, Cambridge, and the immediate surrounding area. At least one third of the 45 remaining sites in Massachusetts are school-based or adolescent focused clinics, which means that adolescents in these urban areas will likely still have Title X-funded clinics. However, it means there are fewer Title X-funded clinics for low-income adult individuals, unless Action for Boston Community Development, Inc. is planning on expanding their service sites with this supplemental funding.

Minnesota: After Planned Parenthood withdrew as a Title X grantee in Minnesota, the grantee remaining is Ramsey County that previously funded seven sites all located within the county. Four of these sites were correctional facilities, two were school-based, which leaves one site, a county public health department, to serve the remaining low-income population who is not incarcerated or an adolescent.

Connecticut: After Planned Parenthood withdrew from the Title X program, Connecticut’s remaining grantee is Cornell Scott-Hill Health Center, a Federally-Qualified Health Center, with seven sites all located in New Haven County. The remaining seven counties in the state have no Title X-funded clinics.

A number of these smaller grantees also participate in the Health Resources and Services Administration (HRSA) Health Center Program and receive federal dollars to provide primary care, including family planning services to low-income individuals. It is unclear  the extent to which they can expand services to address the potential reductions in services that were caused by the loss of other sites, particularly in states with larger numbers of Planned Parenthood sites that are no longer in the program.

In addition, because this supplemental funding is a six-month award it may be challenging for these grantees to bring on new sites in the short time period. The Office of Population Affairs states that the recipients can request additional supplemental awards in their non-competing continuation application starting in April 2020.

While these supplemental funds may help states with remaining Title X grantees expand services in those states, they do not help states that no longer have any grantees in the Title X program. Grantees who decided they could comply with the new regulations for now, may have applied for and received these supplemental funds, but may decide in March 2020 that they can no longer comply with the physical separation requirements that go into effect March 4, 2020. The physical separation requirements in March 2020 may leave a new set of gaps in the network. It is clear that, even with the supplemental awards, gaps remain in many parts of the country.